From the first scene, I know this episode will emotionally ruin me. Carlos and Seb are dancing to “Bop to the Top” for a quick rehearsal and both are slaying the game. It’s fully the cutest thing I’ve ever seen, and I’ve seen videos of dogs and cheetahs who are best friends. Seb is well aware that he only dances this well with Carlos (!), so Carlos suggests they get some extra practice at Homecoming together (!!) and, after some trepidation of dancing in front of everyone, Seb agrees (!!!) CONFETTI!

Nini is having an empowerment moment and decides to flush her HOCO dress down the toilet, because sure. Kind of counteracts the whole no-more-plastic-straws thing, but whatever. Courtney and Nini then decide that maybe they need to avoid HOCO all together and instead have a girls night of epic proportions. Miss Jenn pops out of the bathroom stall like she’s Thoroughly Modern Millie and joins in the fun. What could go wrong?! [insert laugh track]

Ricky is worried about HOCO as a whole, ‘cause, ya know, the boy has been having some relationship issues. When in doubt, take Big Red to his first school dance. That friendship is bizarre to me in the best way and I still don’t fully get how they would stay so close. However, life is weird and who am I to question people’s friends. Moving on!

Miss Jenn takes the girls to the karaoke bar at the local bowling alley (Sex and the City wishes) equipped with a 10-year-old expired coupon like it’s a Bed, Bath, and Beyond. She gives Nini a pep talk, using this as a teachable moment. Nini’s trepidations are completely valid, she says, as it always takes time to find their own spotlight. Snaps for that! As Miss Jenn goes to use her coupon-as-old-as-Ke$ha’s-first-single-“TikTok”, Courtney helps Nini realize that her confidence being gone isn’t really accurate. Sure, Nini feels that her booking of the lead role is a fraud, predicated on the fact that that EJ finessed his way to letting her take over the lead at theater camp. However, Courtney knows that it’s not her confidence that it’s gone, it’s her reliance on connecting her talent to the boys in her life. She needs to get back to why she likes singing in the first place.

This then transforms into a fun, empowerment number for which the production design meeting went a little something like this, allegedly:

“Can you make the girls sing in an area that is reminiscent of that, but not fully that.”

“So, you want it to look like an actual, literal dump, but make it fashion.”

“Behind a bowling alley, it is!”

All while this is happening, Miss Jenn is at the bar flirting with Mike aka RICKY’S DAD. After an emotional triumph for Nini, the girls call it a night, before Miss Jenn gets a call from the principal asking for a meeting Monday morning. Not only was she supposed to be chaperoning HOCO, it seems like the hinted at lies from before are coming back to haunt her.

At the dance, Carlos is alone. All signs point to being stood up and I am heartbroken. I feel ashamed, alone, disgusted, depressed, and like singing an Alanis Morrissette song as I watch myself cry in the mirror. Don’t do this to me, Seb! Ashlyn suggests traffic, but Carlos says there hasn’t been traffic since the 2002 Winter Olympic Games. CUT TO ME: Gina is dragged through the mud by Ricky for being too ambitious, after his anger over her being with EJ jumps out. This is the first time Gina seems to be affected by someone else’s words and is correlating with the fact that her “Take EJ to HOCO” plan is a giant fail. There is no plan, to be quite honest. The only outcome is that she pours punch on EJ and has to Venmo the coat check person (?). Ricky returns to apologize, as he realizes he has no right to judge others on who they hang out with or date and he eventually drives Gina home. They have a really nice heart to heart, connecting over similar at-home drama and a yearning for something more. She leaves him with a kiss on the cheek and a greater appreciation for each other’s lives. A moment most pleasing to me! 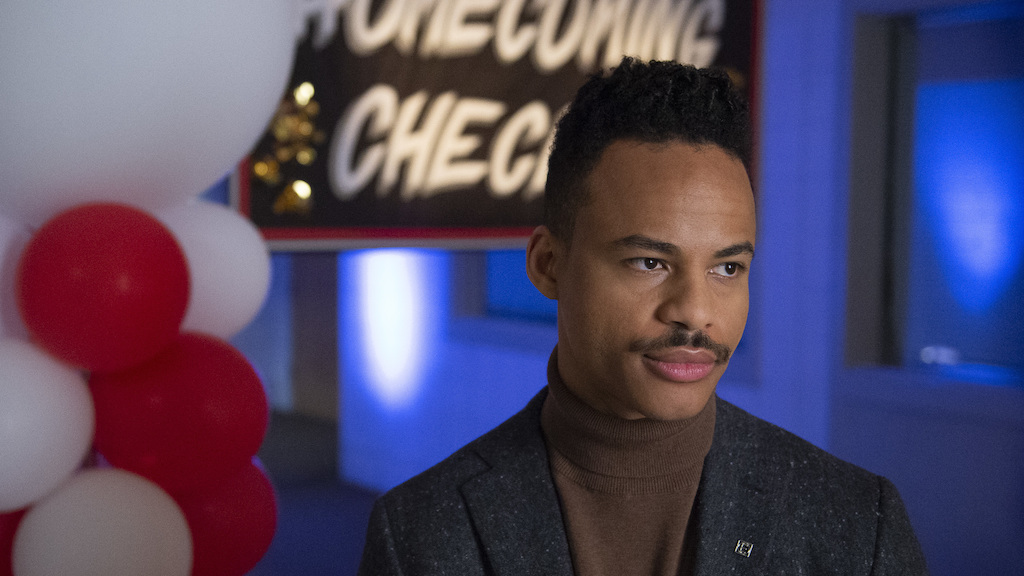 Carlos gets up the confidence, after an odd interaction with Mr. Mazzara, aka Mr. Joyless, to dance on his own. Robyn would be proud. After a rapturous school-wide dance number, in walks Seb and I am a complete and utter wreck. I’m now running through a fields of daisies, tears streaming down my face, soaking in the cool breeze and warm sunbeams. He is THERE. He’s late because they lost a cow on the farm! That is the cutest excuse I’ve ever heard. They start to dance. I start to realize I’m lonely, because they’re too cute to handle. Next week, if we don’t get more of Carlos and Seb, I riot.