Let the Miss Jenn fallout begin. What has been hinted at all season is slowly being revealed and the outcome isn’t good. Miss Jenn’s secretive past is coming back to haunt her and she has been asked to semi-pack her office up “just in case.” This is not good, friends! What will we do without the exuberant and stylish presence of Miss Jenn in our lives?! Will High School Musical be put up without her coaching? Will she just leave and go to New York City to replace Ivo Van Hove as director of the West Side Story revival?! 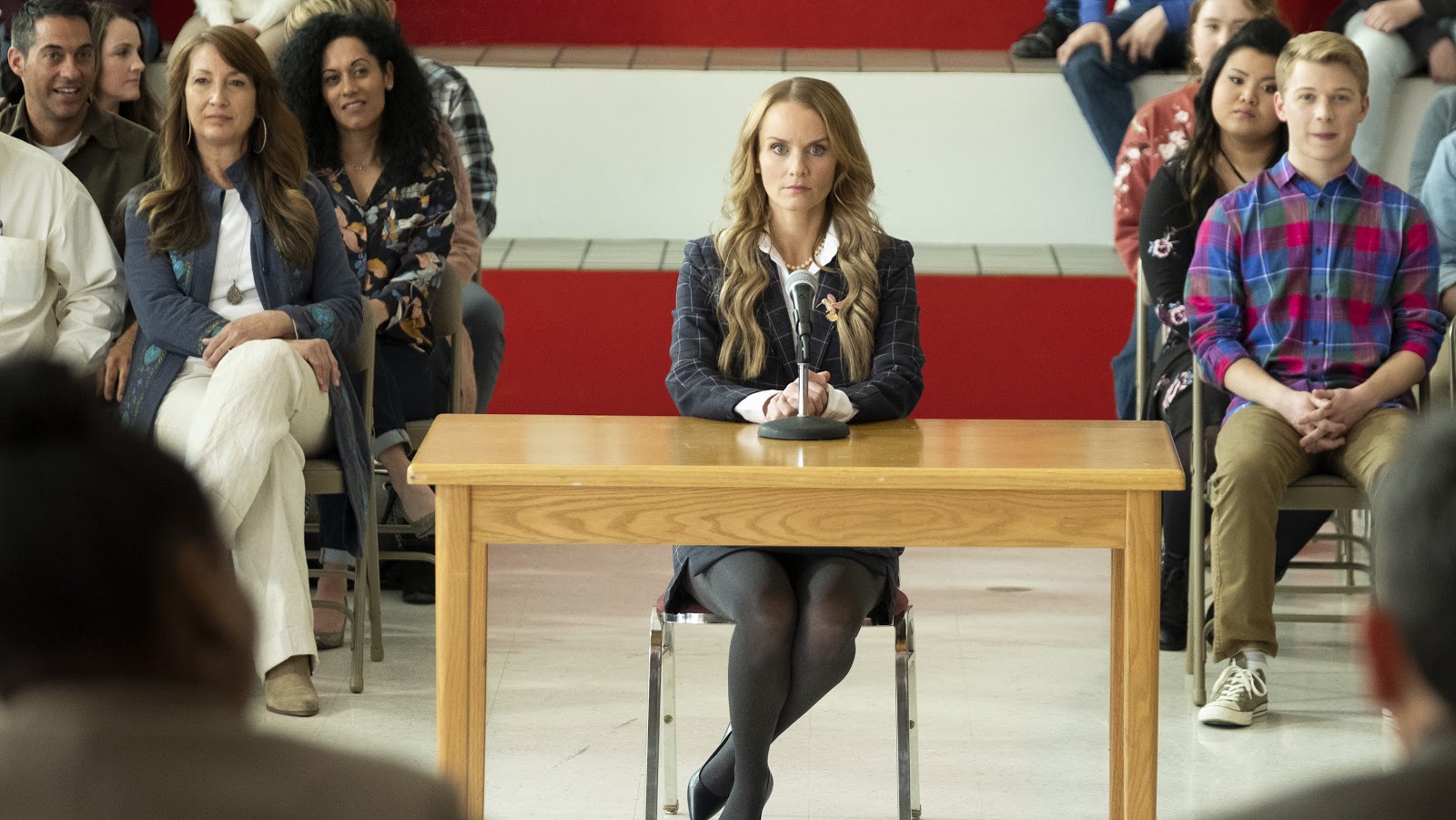 While the beginning of Miss Jenn’s demise is taking place, Carlos heads to the auditorium to work on the poster artwork for the production. They decided to recreate the iconic poster artwork of the cast jumping. What they don’t seem to realize, along with the rest of the world, is jumping photos never turn out well. That’s canon. However, the cluster gives us Seb in full Sharpay attire uttering the phrase “I am home” and, as Seb’s biggest stan, I melt. Ricky is also wearing a Troy Bolton wig that is so genius, I’ve just ordered one on Amazon out of jealousy and a need to be cool.

Carlos finally gets a quick run-down from Miss Jenn on what is actually going on, and the news isn’t good. She’ll be suspended for the next 24 hours in preparation for her school board meeting the following day. [insert Law & Order noise] Carlos tries to take charge of the cast in rehearsal for a “forest of boys” scene, but alas, everyone is confused about Miss Jenn’s lack of attendance. Also, they think “forest of boys” is stupid. What is this? Ivo Van Hove’s West Side Story?!

This whole scene was very reminiscent of my own 8th-grade choir class where our regular teacher went on maternity leave and tried to get us students to teach the class instead of the impending substitute. It did not go well. Think Riverdale, but less murder. D-R-A-M-A. So, this scene gave me some major flashbacks I have tried to suppress, so that’s fun.

With the impending critiques from the rest of the cast, Carlos pulls a Torrance. 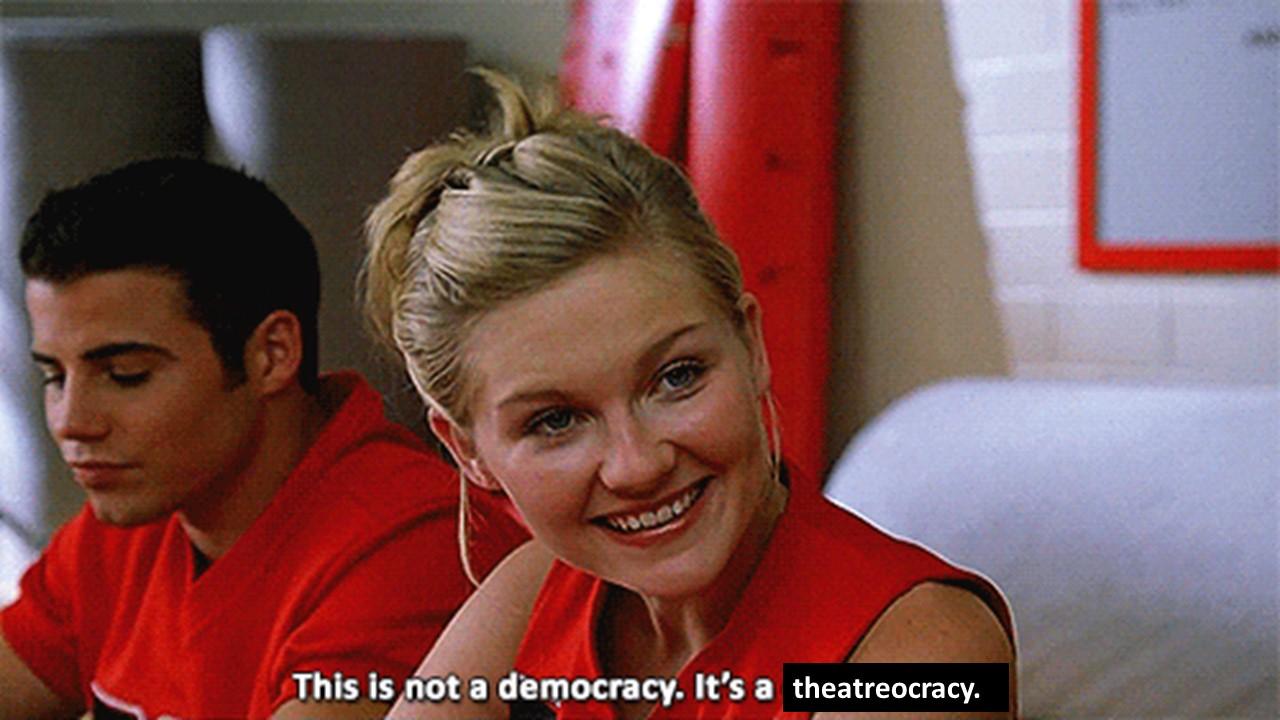 Two people smiling for the camera

He decides, even though he was sworn to secrecy, to explain Miss Jenn’s situation to the cast. They don’t take it well, obvi. Seb gives more comforting words to Carlos and I cry more, but that’s beside the point. I AM FINE, y’all. The class then, just, leaves. Out of defeat, anger, frustration, and a bucket of other emotions. Once again, 8th-grade choir flashbacks.

Miss Jenn meets up with Carlos at a café to explain her situation in a little more detail, and what is clear is her passion for her students. She says she faked her last name in the hopes to deter her lack of true accomplishments. She also fibbed some credits on her resume, but like, who hasn’t? *laughs through teeth* She knows bad information will come out, and while all of it is true, she assures a broken Carlos that everything she has done is so the show can succeed, and the kids can soar. She leaves him with the director’s file and heads out to emotionally concede defeat.

Big Red and Ricky spend the night commiserating over the impending doom of the show, but quickly turns into a full cast wallowing party. A true bummer. Over the course of the night, the conversation forms into how they’ve all become a family and I am fully sobbing on the floor like Natalie Imbruglia. Theater saves lives and creates lifelong bonds! There seems to be a spark of inspiration within their theater-loving hearts of how to save Miss Jenn. If this was an hour-long show, we’d be treated to a montage. However, we only got 30-minutes, so onward!

The school board meeting occurs the next day at the school itself (?) and the odds are definitely not in Miss Jenn’s favor. However, out of all the people to speak up, Ricky’s dad stands and expresses his appreciation for the work Miss Jenn has done in finally getting his son passionate about something. CUT TO: A multitude of extras giving confident head nods in approval of his sentiment. 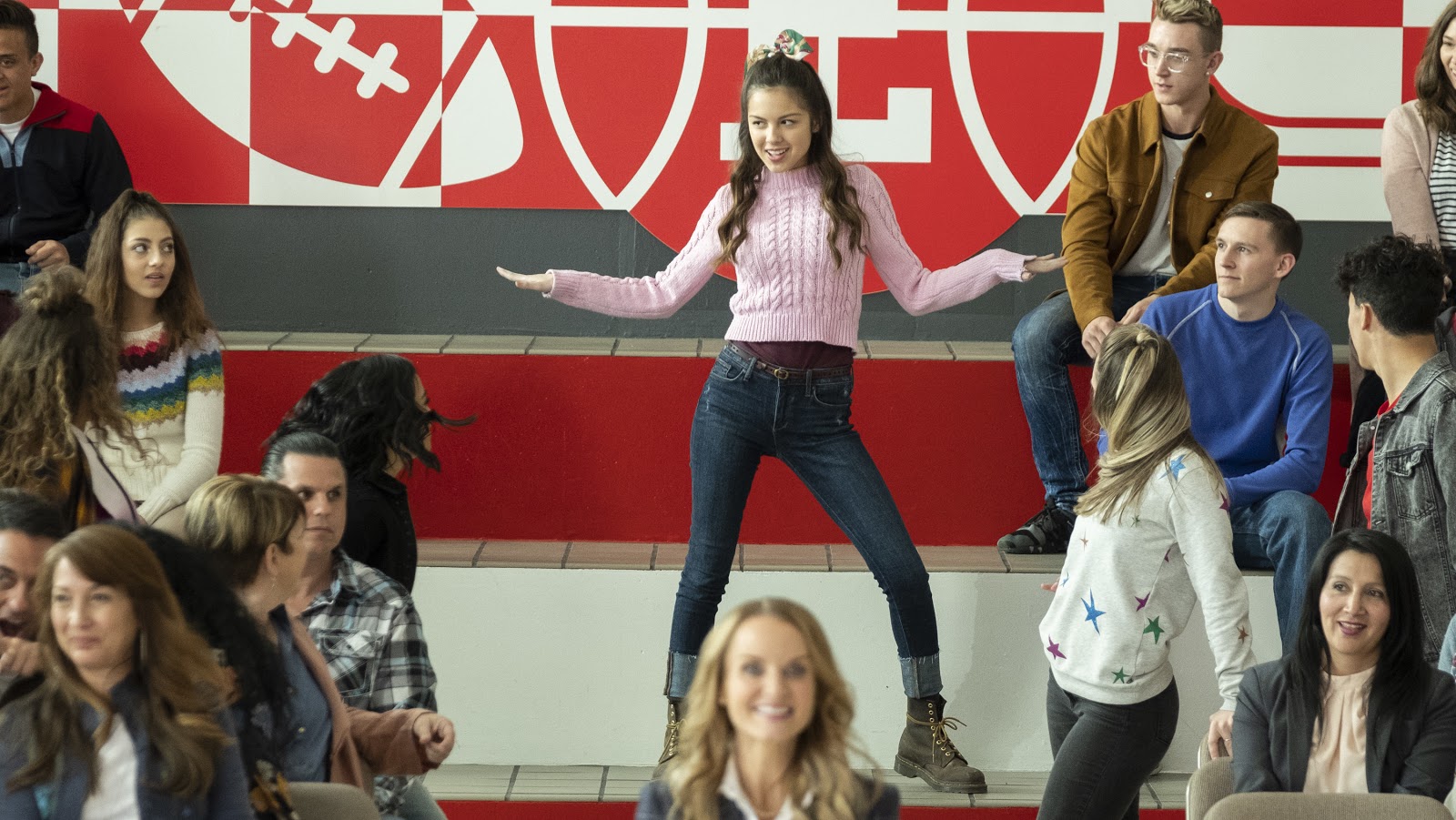 But, the best is yet to come. The entire class has pulled together an effective, complex, and over-the-top supportive flashmob in honor of Miss Jenn. There are musical theatre terms woven in! Seb gets a solo! Courtney is the John Cusack of the situation! They call her out for not seeing Dear Evan Hansen! It’s highly impressive, super infectious, and reminded me a lot of Ivo Van Hove’s West Side Story.

It is evident that the principal has lost and Miss Jenn is here to stay, but not confirmed until HSM ALUMNI KAYCEE STROH pops and locks her approval. It was a bizarre cameo that I am 100% here for, folks!

Unrelated: I made an audition tape for season 2. Somehow, I’m not getting called? Weird.