The latest Marvel Rising animated special is here and it’s turning up the heat on the Secret Warriors. Marvel Rising: Playing with Fire focuses on Dante AKA Inferno as he struggles with whether or not he really wants to live the life of a superhero or return to his normal life. Meanwhile, a new villain emerges and steals Dante’s power creating a dangerous new threat. Now he has to ask himself: does he even want his powers back? 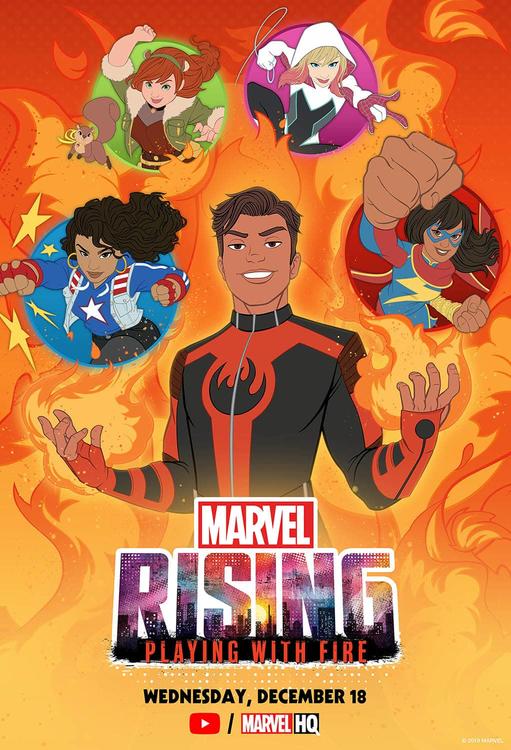 This is a fun twist on a classic superhero story. We’ve seen just about every Marvel hero struggle with the idea of leaving a normal life behind for a life of serving and protecting. The shell of the story is nothing new, but throwing in the wrinkle of Dante’s powers being taken from his was a nice touch. The moral dilemma allows both the story and the character to be fleshed out a bit more, at least as much as the 44-minute runtime allows.

The strength of Marvel Rising: Playing with Fire comes from the voice work of the recurring cast. Tyler Posey (who voices Dante) and company have clearly connected with their characters and have nicely settled into their roles. Navia Robinson brings the villainous new character Zayla to life in a very convincing way as well.

There are also a couple of fun side stories. America Chavez (Cierra Ramirez) gets close with Ms. Marvel’s (Kathreen Khavari) family, much to the confusion and dismay of the latter. Also, Tippy Toe tries to help Lockjaw get over a cold of some sort. Both of these stories are very entertaining, particularly the one where an intelligent squirrel attempts to heal a giant sick teleporting dog.

One thing I’m not personally a fan of when it comes to the Marvel Rising animated specials is the actual animation. At times it definitely looks beautiful, but I also feel as though the character’s facial expressions don’t always match what they’re saying or what we would assume they’re feeling. The style works very well for flinging massive fireballs but not so much for expressing emotion.

I’m also not crazy about the overuse of music throughout the specials. Without really keeping track, I think I counted four songs that played during action or dramatic sequences. It works for a while but it eventually feels a bit overdone. With that being said, I would probably listen to all of the music from this particular special again, so maybe I’m just nitpicking a bit.

Overall, Marvel Rising: Playing with Fire is a lot of fun. It feels fresh despite the base of the story being one that has been told probably hundreds of times. The Marvel Rising series is filled with lovable, entertaining characters that will always draw you in, and it helps that the actors seem to be so connected with their characters.