Touchstone and Beyond: A History of Disney’s “Swing Kids”

Continuing our look at “History on Film”, Touchstone’s sister company Hollywood Pictures released the 1993 World War II-era drama Swing Kids to little acclaim and a disappointing box office. The movie was based on a real movement of rebelling kids in Germany during the late 1930s who grew their hair long, thumbed their noses at Nazi authority and listened to American swing music. These kids would refuse to join the Hitler Youth program and would spend their evenings at dances where swing music was played late into the night. 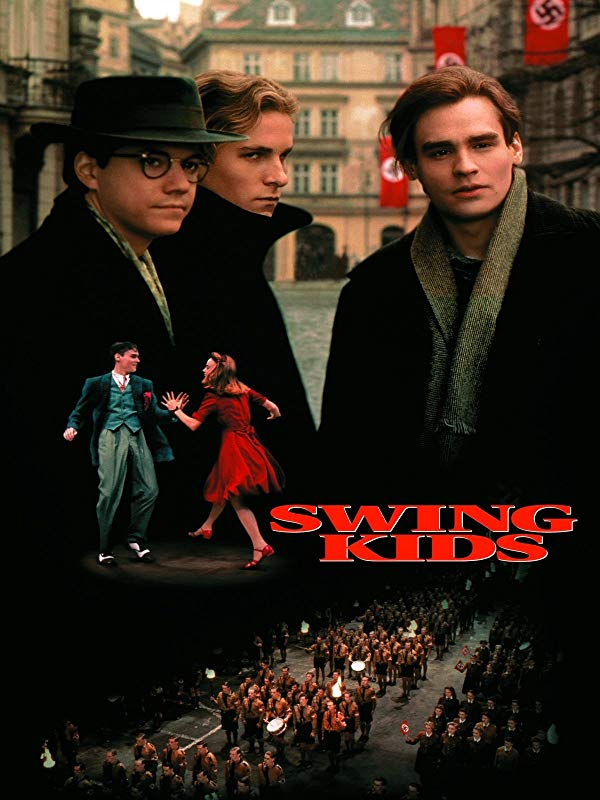 The film opens in Hamburg, Germany in 1939. We meet Peter, played by Robert Sean Leonard, Thomas, played by Christian Bale, and Arvid, played by Frank Whaley. These three boys are swing kids and have just come back from a night at the Café Bismarck. They flaunt their style and coolness and don’t care about what the authorities have to say.

Peter’s life is very constrained. His mother, played by Barbara Hershey, is worried about her son, and his little brother Willi desperately wants to follow his big brother to a swing dance. Peter and Thomas eventually try to steal a radio for an ailing Arvid, only to have Peter caught and forced to join the Hitler Youth. Thomas joins to be with his friend, and the film shows in detail how the youth of Germany are brainwashed into thinking they are superior through the Hitler Youth program. Peter resists the misinformation coming from the authorities in the Hitler Youth, Thomas can’t. He starts to identify with another former swing kid, named Emil, played by Noah Wyle, who has become a brutal thug. The friendship that was so strong between Thomas and Peter shatters.

The two friends can never be the same. Thomas starts to blame everyone like the propaganda tells him to, and finally the film concludes with Peter heading to one last swing dance at the Café Bismarck. Here we see Peter come alive and express his feelings of rebellion in dance. The Hitler Youth are sent in to break up the dance, and arrest everyone. Thomas is part of the raiding party and a fight between Thomas and Peter ensues.

Peter is arrested and sent away on a truck at the end of the film with little Willi standing in the streets, screaming Swing Heil, the youth insult to the Nazis.

The movie does a great job showing how youth can be indoctrinated into a cult and have their viewpoints change. Thomas is an excellent example of someone who is lulled into the life of the Hitler Youth, and molded into what they want. He goes from being Peter’s best friend, to a lying brutal thug that would turn in his father to the authorities.

The dance scenes are top-notch, and no doubt the amount of time and effort put in to have the principal leads be able to jitterbug perfectly was tremendous. The costuming also sets the stage and allows us to identify with Peter especially. The scene near the climax of the film where he carefully dons his suit to go out to the club lets us know that this is the one and only true uniform that Peter wears. He is a swing kid, and not a Nazi.

Kenneth Branagh has an uncredited role in the film as a member of the SS, Herr Knopp. He shows up in the film after the opening scenes where the boys witness a man jump to his death after being chased by the SS.

Knopp takes an interest in Peter and his mother, and when Peter is arrested for stealing the radio it is Herr Knopp who Peter’s mother Frau Muller calls to get him out of trouble. Knopp likes Frau Muller and takes an interest in helping the family. Knopp looks like and acts like a good guy, but Branagh infuses a quiet rage that sits just beneath the surface. Knopp is always talking in a passive calm voice, but it is Branagh’s skill that makes Herr Knopp the most dangerous character in the film.

Throughout the film the actors are constantly wondering how the Nazi’s were able to raid the dance club, and that everything was supposed to be secret. I find any of these activities to be secret ridiculous. Right out in the middle of the city square the boys are constantly talking about their dancing, and how much fun they had. These boys are in no way discreet about what they do. Anyone with a pair of ears would know when the next swing dance is, and how to find it, simply by listening to these fools as they walk around town.

The special code that swing kids whistle to identify as part of the group never changes. In one scene Peter is walking through the streets of Hamburg and an unknown Hitler Youth comes riding by whistling the code. Peter thinks it’s great because it shows that the Hitler Youth is a swing kid in disguise. Never once do the boys discuss about being secretive or changing their special code for fear of infiltration.

The final scene with Willi picking up the umbrella and screaming Swing Heil as his brother is driven away probably never to be seen again, is ridiculous. Not only would Willi be quickly arrested too but it just wouldn’t be allowed. During this massive raid to shut down the swing kids, with hundreds of Nazi thugs around, no way would a kid be allowed to stand in the middle of the street and be allowed to scream Swing Heil which spits in the face of everything that the Nazi’s are trying to control. It’s the hopeful ending that historical films try to add to make their story uplifting but negates the power of what is happening.

The fact is there is nothing uplifting about the future of what will happen to our swing kids. Peter will be sent to a work camp, which means he could easily be killed, and Thomas will most likely die in the coming war. There is no happy ending for the characters or a redemptive moment with a positive outcome waiting around the corner.

Skip It. While the film tries to explore a new story to the well-known narrative of World War II, it’s hard to recommend this film. Most of the actors, from Leonard to Wyle, look to old to play the teenaged characters, the plot is ridiculous, and the actions of the characters betray any thought that they are trying to be secret about the swing kid life.

There were so many times during this film that I laughed out loud at supposedly serious points that I couldn’t take the subject matter serious. This is based on a real movement, but rather than developing the characters the audience is left wondering how these kids could be so ignorant to the dangers around them.

The problem with Swing Kids is that the story is forcing us to focus on the wonderful dance numbers and hoping that we forget how stupid these characters are, and how ignorant to the reality of what is going on around them. At the very start of this film, the three leads witness the SS chasing after a man who jumps off a bridge, with the Nazi troops shooting at him as he tries to swim away. Perhaps that’s the message of the film. No matter how much day to day life is trying to tell you something, the ignorance of youth will allow you to miss out on what is really going on until it punches you in the face; much like what happen to Peter at the end of the film.