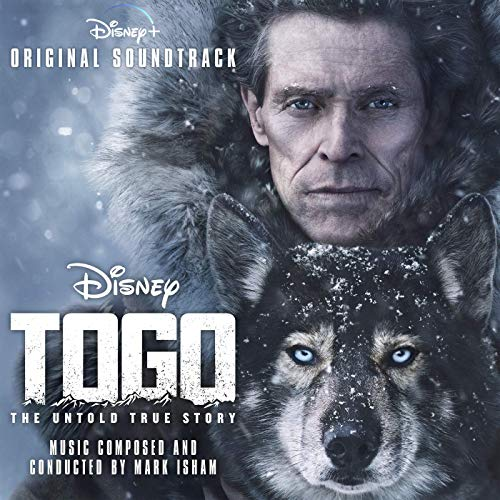 Disney’s Togo is a film that could melt even the coldest of hearts, an inspiring story of a dog with a tremendous amount of bravery and love. The soundtrack to the Disney+ original film presents the full film score by Mark Isham, who was responsible for the music in ABC’s Once Upon a Time in addition to Disney films like Eight Below and Miracle.

The film has a slow pace and often strikes a somber tone. The score primarily reflects that with lots of slow string arrangements and violin solos to create mood and suspense. It’s by no means an uplifting score even if the film has an inspiring message, but there are two moments of inspiration and lightheartedness on the soundtrack.

“All Alaska Sweepstakes” is the nineteenth track on the album, which underscores the team’s unlikely win at the Iditarod race. The song is flighty and fun, providing some much needed reprieve when listening to the entire soundtrack on its own. It reaches a level of pure joy that is absent from most other tracks.

“Digging” is another break from the typical tone of the soundtrack, a bouncy and plucky melody that leads into one of the most uplifting pieces on the album. The strings in this piece almost take on a Lindsay Sterling-like quality. This track is followed by “Resourceful Pup” which begins with a staccato melody that reminds me of a Carly Rae Jepsen song called “Right Words Wrong Time.” The track builds up to an arrangement that includes a flute, one of the few times any wind instruments are heard on the score.

My favorite song on the album is called “To Lead,” which is a powerful heroic anthem that doesn’t get used enough. In addition to lots of strings, some brass instruments are included in the songs biggest moments and winds in the quietest. It’s reminiscent of Joe Hisaishi’s work on Studio Ghibli films like Princess Mononoke.

As an album, the Togo soundtrack offers a somber listening experience, which isn’t typically an emotion I crave in music. But the few tracks specifically called out in this review offer the most enjoyment and are the ones I recommend for fans of the film who want to experience the music on the go. If you’re looking for one track to encapsulate many of the film’s themes, the final track is called “Harnessed to Your Heart” and offers the best sampling of the more somber melodies.