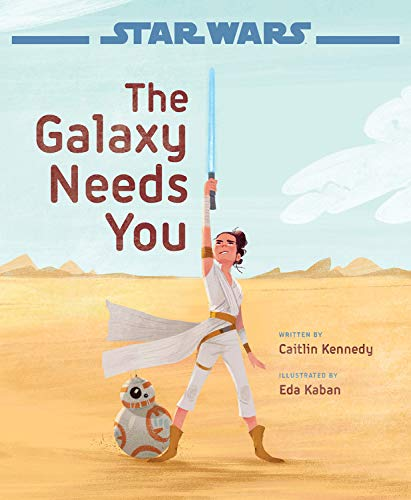 Kids need lots of praise and reassurance as they grow and learn. With that in mind, Lucasfilm Press has released a children’s picture book that uses the Star Wars characters to remind them that they are special and unique. From Caitlin Kennedy and Eda Kaban, Star Wars: The Galaxy Needs You is a reminder that your child is the only person in the universe exactly like them.

Using illustrations from the Sequel Trilogy, Caitlin Kennedy’s words provide messages of positive affirmation juxtaposed against Eda Kaban’s illustrations that depict moments from the films in chronological order. There’s not much of a story to speak of, establishing itself more along the lines of Dr. Seuss’ Oh, the Places You’ll Go. That book is a popular gift for high school and college graduates and Star Wars: The Galaxy Needs You could serve a similar purpose for a Star Wars fan starting the next phase of their life.

The final six pages depict scenes from Star Wars: The Rise of Skywalker, but nothing in them could be considered spoiler territory. What I really love about books like this is that they introduce kids to Star Wars characters they see every day on t-shirts, backpacks, and toys in a way that is preschool friendly. Parents could easily tell their kids about Rey, Finn, Po, Kylo Ren, Luke, Leia, Chewbacca, Lando, R2-D2, C-3PO, and BB-8 while scrolling through these pages and seeing pictures of some of their adventures.

Eda Kaban’s illustrations have a chalk-like texture to them. Edges are fuzzy, giving them a gritty look that feels at-home in the Star Wars universe. It works exceptionally well when depicting scenes of sand planets like Jakku. Edges get a little tighter for other scenes, like Rey working with Luke on Ahch-To, which is full of porgs in these pages.

Caitlin Kennedy is no stranger to writing Star Wars books for kids, particularly educational ones. Kids can learn the alphabet with ABC-3PO, learn their numbers with Obi-123, learn about their emotions in a poem book called Star Wars: Search Your Feelings, and learn about animals and opposites in a similar poem book called Star Wars: Creatures Big & Small. She has also published some early readers, like C-3PO Does Not Like Sand.

If you have younglings who are interested in Star Wars but not old enough to handle the saga films, Star Wars: The Galaxy Needs You is a great book for them. Through pictures of the Sequel Trilogy, parents can share elements of the most recent saga without getting into the dark and scary moments. With words of encouragement, they will feel unique and special and ready to take on any challenges life throws their way.