Peyton’s Places follows the NFL great around the country as he explores the history of the National Football League, one piece at a time. The 27th episode is titled “Elvis Presley,” and it explores the King’s burning love for the game of football. The episode starts off, as you might expect, with Peyton visiting Graceland to speak to Elvis’s friend Jerry Schilling. Before he really gets into it though, Peyton goes through a bit of his own background, explaining his love for Elvis’s music and even sharing a Saturday Night Live bit that was cut form the show, in which Peyton plays an Elvis impersonator doing karaoke. That was a pretty cool added bonus from this episode.

He later gets inside to speak to Schilling, who gives Peyton (and us) a tour of the King’s home. If you’re a big fan of Elvis, this is probably nothing you haven’t seen before, but if you’re a football fan with more of a mild interest and respect for Elvis, this is a really cool segment.

It doesn’t take long for the conversation to be steered to football as Schilling talks about playing with Elvis as well as watching as much football as they possibly could. We get to see multiple signs of his love of football, including one room with three televisions specifically for watching whatever games were on as well as an honorary plaque from Arkansas State University, where Elvis never got the chance to attend and play football because of his career.

Next, in what is probably the most interesting segment of the episode, Peyton and Schilling sit down to watch footage of Elvis actually playing touch football. Peyton takes time to critique his throwing motion a bit, but ultimately this segment is just a lot of fun. It’s pretty amazing to know something like that is actually stored on film somewhere.

Next, Peyton meets with Graceland’s Chief Archivist Angie Marchese to check out a sampling of Elvis’s football memorabilia. Here, we get to see some pretty interesting things, including an MVP award Elvis won from a German touch football league, which even Schilling said he had never seen. We also see a few football plays that Elvis drew up himself, which inspires Peyton for the next segment. 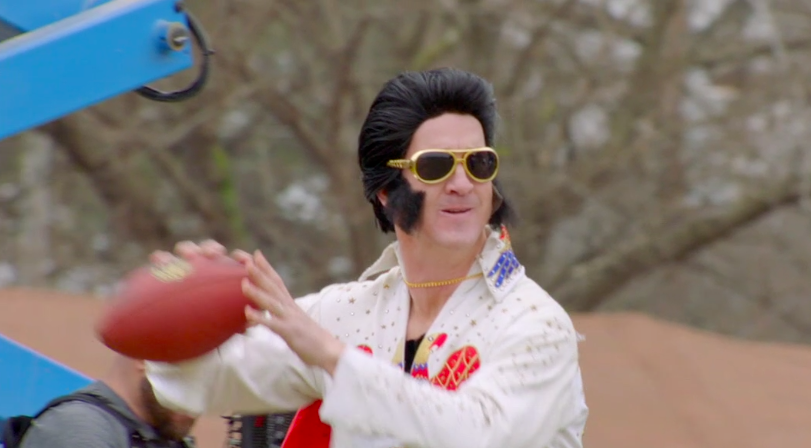 Peyton decided to get out on the field with the football team from White Station High School to try and run some of the King’s plays. Before we even get into the fun of seeing Peyton execute plays drawn up by Elvis, it was really cool to see the starstruck teenagers as they watched Peyton Manning approach them on the football field.

Unfortunately for Peyton and his new teammates, the plays just didn’t seem to be working. So naturally, Peyton needed to make the most ridiculous adjustment he possibly could and put on an incredibly over-the-top Elvis costume to run these plays correctly. If you love Peyton’s cheesy sense of humor (and I do), this is a great bit.

This is yet another great episode of Peyton’s Places. It gets away from the true history of the NFL a bit and goes in another direction, making it a great episode for those who maybe aren’t the biggest football fans. And of course, who doesn’t want to see Peyton in a full Elvis costume throwing passes to highschoolers?