Peyton’s Places follows the NFL great around the country as he explores the history of the National Football League, one piece at a time. The 29th episode is titled “The Super Bowl” and it breaks down the history of how the biggest sporting event in the world came to be. The episode opens with some highlights from Peyton’s last NFL game – Super Bowl 50 at Levi’s Stadium in 2016. It’s a nice introduction, revisiting one of the coolest moments in the history of the NFL as one of its greatest quarterbacks to ever play the game got to ride off into the sunset with one last Super Bowl win.

The episode then transitions into the history of the Super Bowl, or rather the championship vote of the old NFL. The lesson goes back 100 years, to a time where there was no Super Bowl or any form of playoffs or championship game. Instead, after the regular season, team owners would simply elect a champion. This is a pretty shocking fact given how popular the Super Bowl is today. Imagine, instead of watching the big game on sunday, you’re simply waiting around for election results.

We then move along to a brief look at the NFL Championship game before getting into the battle between the NFL and the AFL for football dominance. That brought Peyton to Dallas Love Field airport for a chance to give some strangers a history lesson.

Peyton meets unsuspecting people in the airport next to a statue of a Texas Ranger. In a segment that is both entertaining and informative, Peyton both knocks the teams of which these strangers are wearing the colors and tells them the story of the AFL/NFL merger, which resulted in both the birth of the Super Bowl and the NFL we know today.

The episode gets into its first extended segment once Peyton sits down with Joe Namath to discuss Super Bowl 3. Peyton explains how the dominant wins by the NFL’s Green Bay Packers in the first two Super Bowls had almost rendered the game irrelevant, and with the Baltimore Colts being heavily favored over the AFL’s New York Jets in the third game, it was going to be more of the same. However, Jets quarterback Joe Namath guaranteed victory in the game, despite being a heavy underdog and then took the field and delivered. The segment shows a lot of highlights from a classic game that may or may not have saved the NFL.

Next, after briefly touching on the game’s increase in popularity, Peyton jumps ahead nearly 20 years to discuss Super Bowl 22 with former Redskins quarterback Doug Williams, the first African American quarterback to play in and win a Super Bowl. 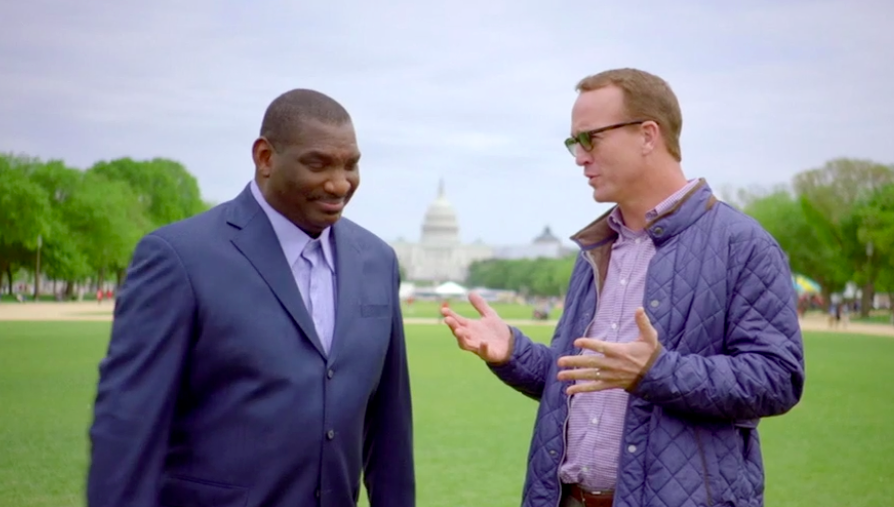 This was obviously a very historic moment for the NFL and one that was very cool to see revisited, especially hearing from Williams himself. However, this segment stretched for the remainder of the episode, resulting in only two Super Bowls being discussed in an episode titled “The Super Bowl.”

I would have much rathered see the story of Williams’ triumph in Super Bowl 22 get its own episode and have this one break down some of the other more memorable Super Bowls as well. After all, there have been 53 of them and this episode really only gets into two.

Still, this is a very interesting segment and one that tells the story of a very important moment in the NFL’s history. It’s one of the more powerful and moving segments this series has put together.

Overall, this is a solid episode of Peyton’s Places but far from the best. It is very informative and pretty entertaining, but I feel it is flawed based on the fact that it’s really only two parts of a story that spans 53 games. Still, it’s well worth a watch, as is just about every episode of this series.