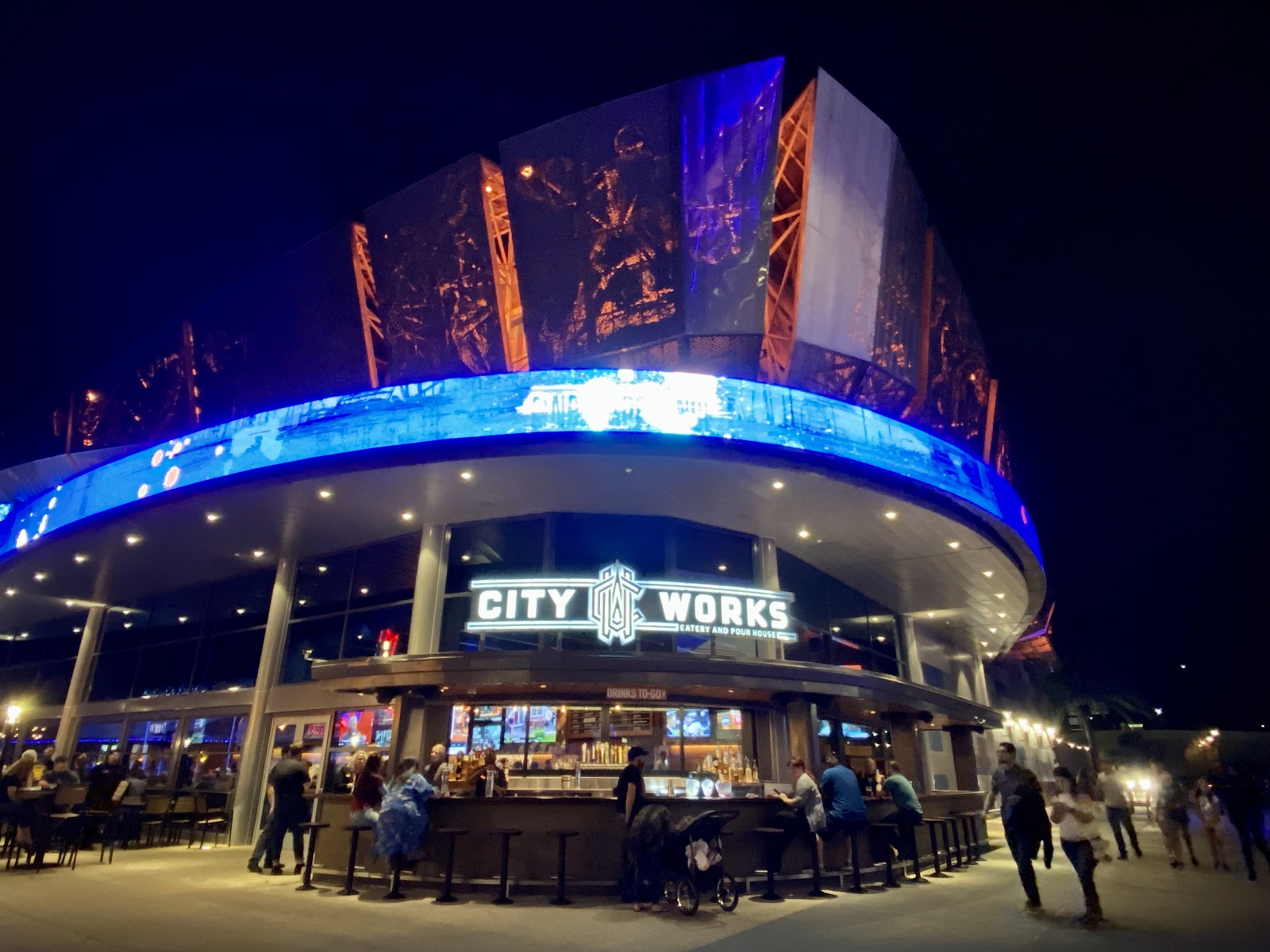 For as long as I can remember, friends have asked, “Where can we watch [insert sporting event] while we are on vacation?” And, until now, the only possible choice was The ESPN Club at Disney’s Boardwalk Resort. Enter City Works Eatery and Pour House, which is now open at Disney Springs. The new location not only offers guests somewhere to gather for those big games but also gives them the chance to enjoy some great food. We were invited to try a meal recently and, even as a non-mainstream sports fan, this will be a place I will return to in the future. 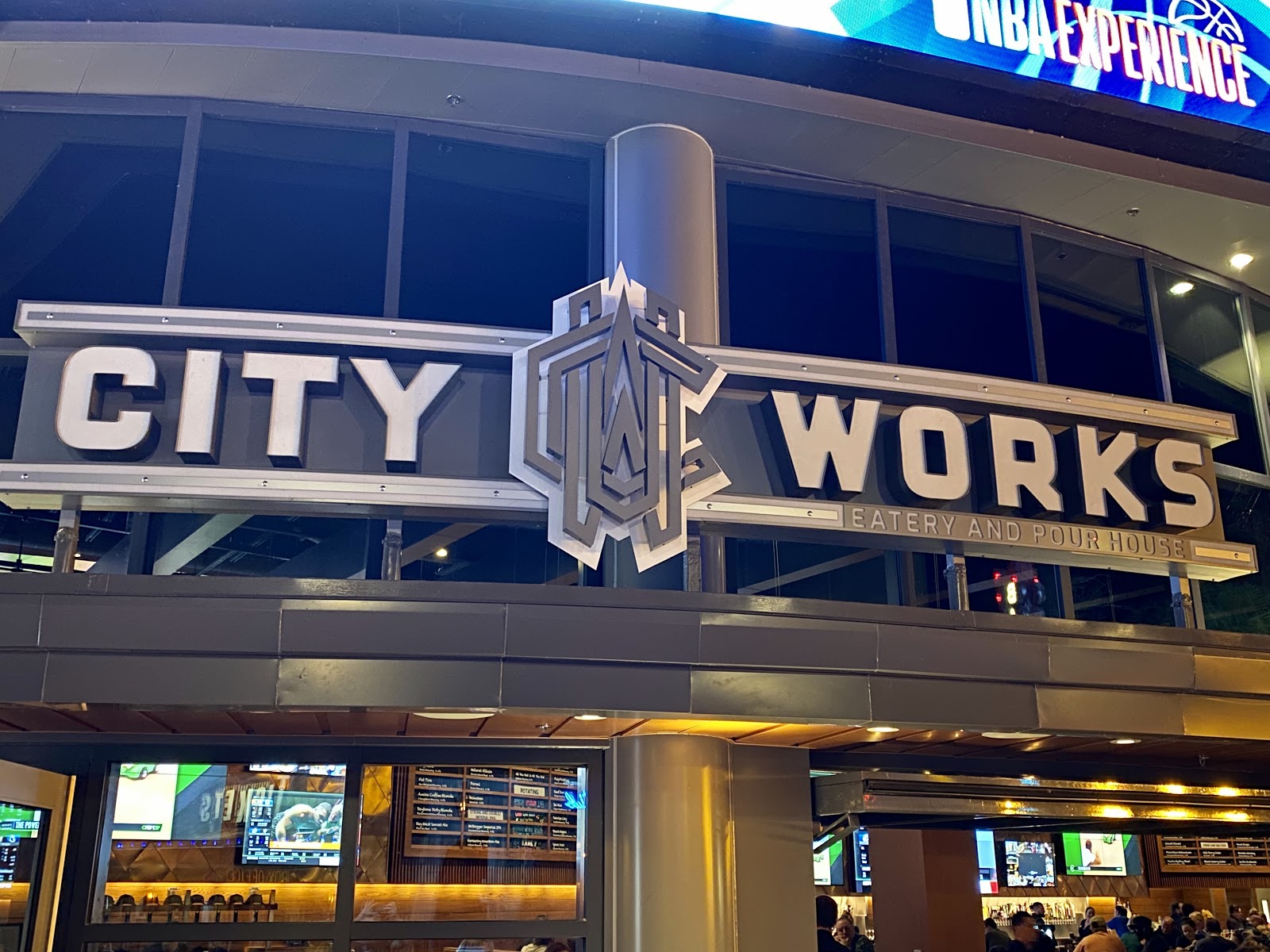 Located on the Westside of Disney Springs, working as a complement to the newly opened NBA Experience, City Works has a wide variety of offerings — from bar bites to a full rack of ribs. However, perhaps the main draw is the 90 different beers they offer on tap. From local IPAs to the old favorites, the only problem a beer fan will have is which one to try first! As I said, this is the new home for all the big sporting events. With 17 flat screens around the restaurant and a giant 70 inch screen in the center of the bar wall, no matter where guests are seated, they will be able to cheer on their favorite team — all in the comfort of some of the most comfy chairs and booths I have felt in a while. 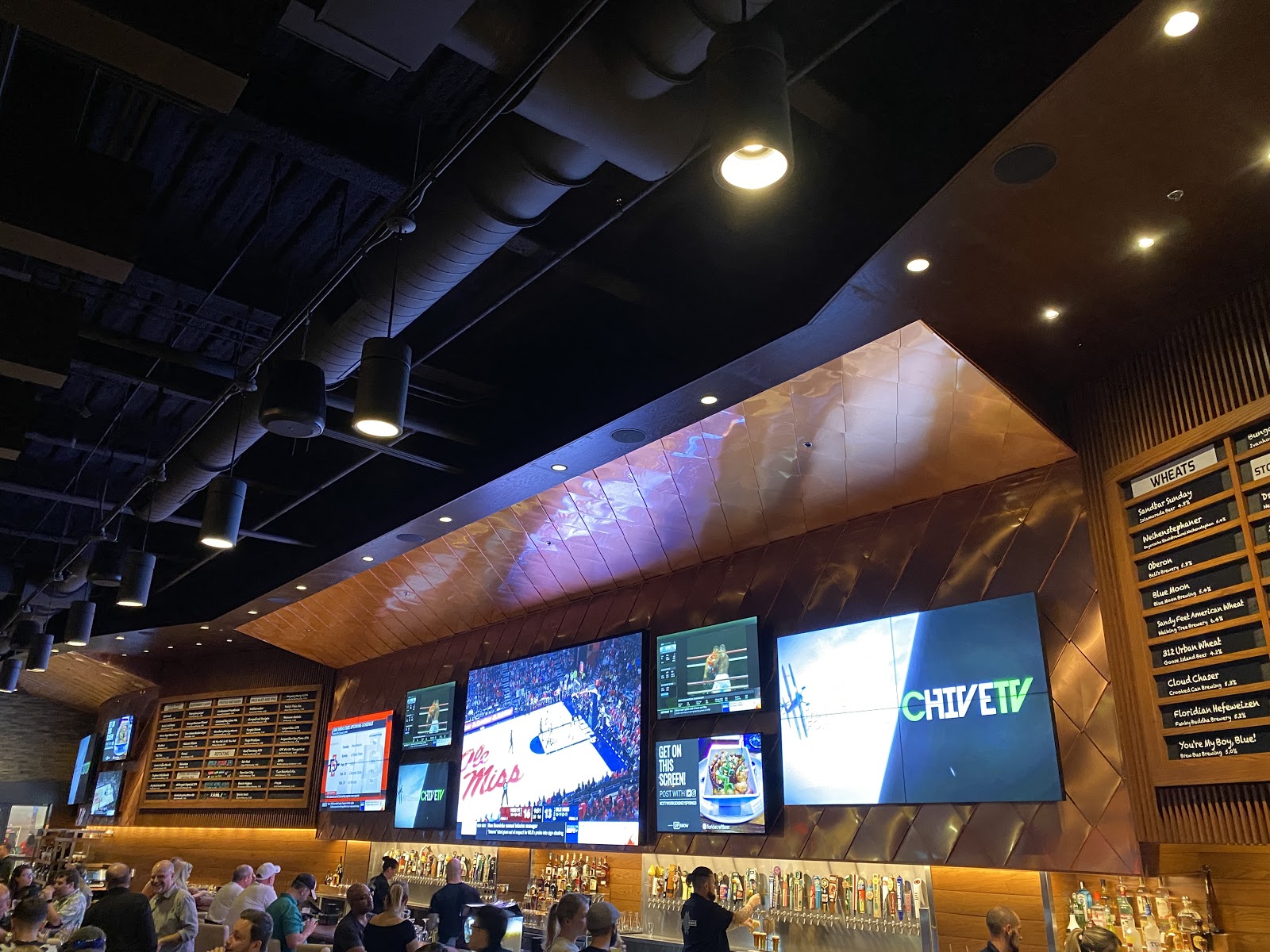 Now for the food. I will admit I am not a foodie at all. Often times, when it comes to the “review” part of restaurants, I leave that up to others because, to me, food is what you eat not what you review or take pictures of. With that being said, City Works has some amazing dishes that will drive me back many times in the future. We started off with the Cheese Curds and, as my dining partner who spent time in Wisconsin said, “they aren’t true cheese curds but they are really good.” So good, in fact, that they were gone well before our main dishes arrived. 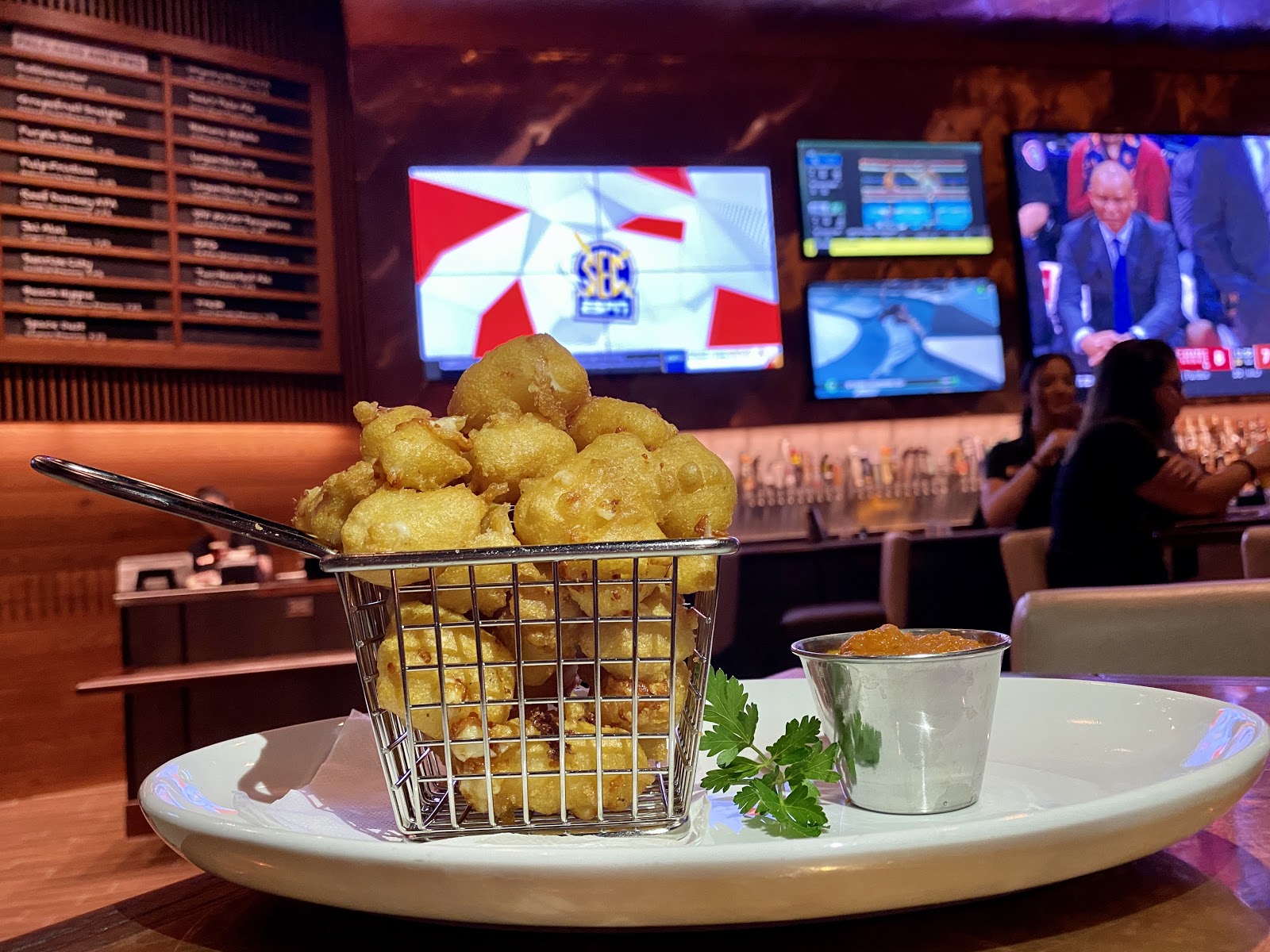 For my main course, I went well outside my comfort zone and went with the Cajun Linguine, featuring blackened chicken, andouille sausage, bell peppers, red onion scallions, sriracha cream, and of couse linguine pasta. This did leave my lips on fire for most of the night but didn’t stop me from finishing the entire plate. 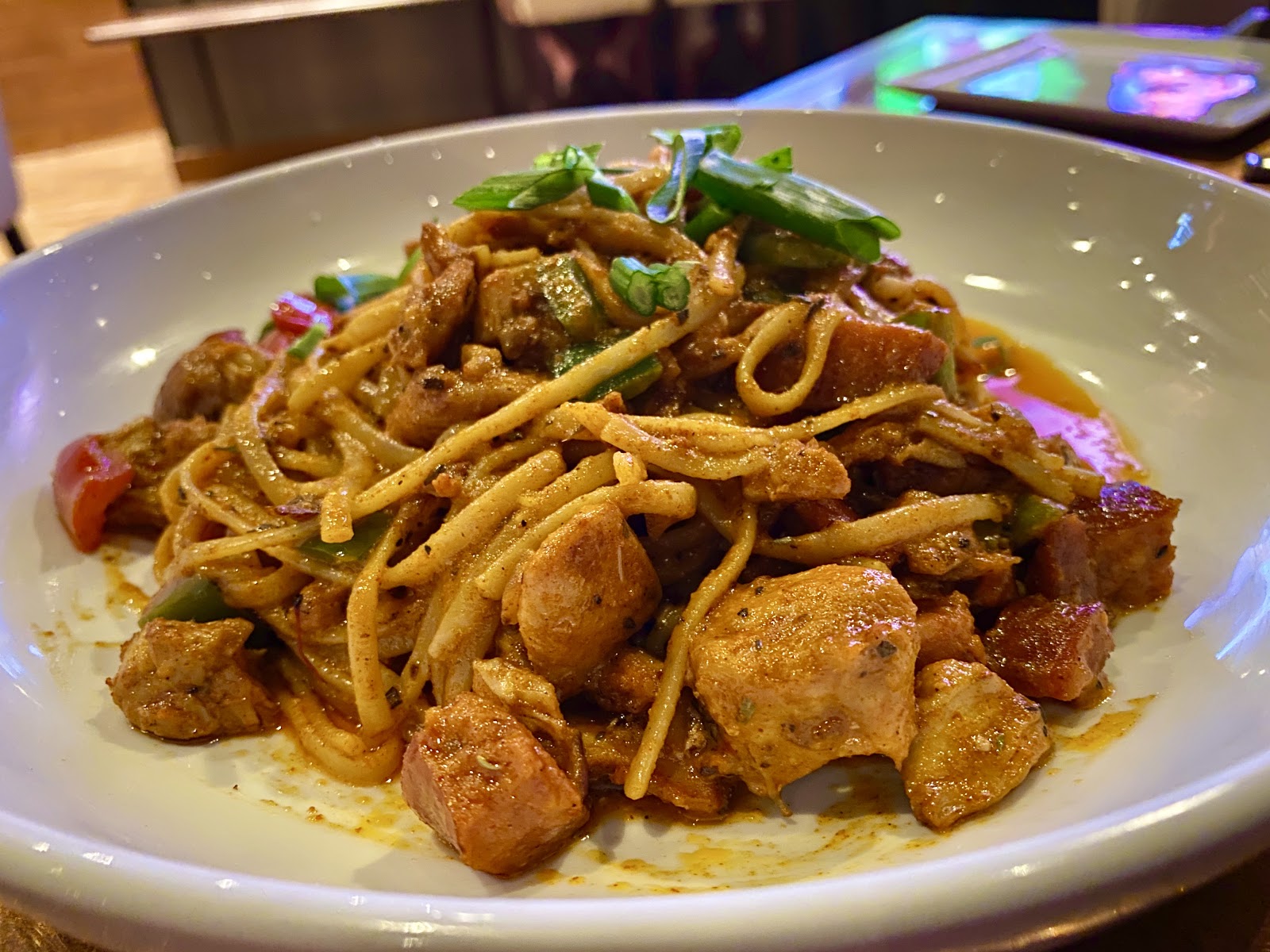 My dining partner went with a classic: the Smoked BBQ Ribs — a hardwood-smoked full rack baby back ribs with house-made BBQ sauce, spicy maple bacon baked beans, and mascarpone creamed corn. Now, I have had ribs from my grandfather’s backyard in California as well as in New York City and most states in between. With that experience, I have to say these were perfect. The glaze was just right and cooked with a bit of crispy on the outside and juicy on the inside. Surprisingly, the real show-stealer of this dish was the mascarpone creamed corn. We both thought that as a side it was very underrated and could have each had just a bowl of that for a meal. 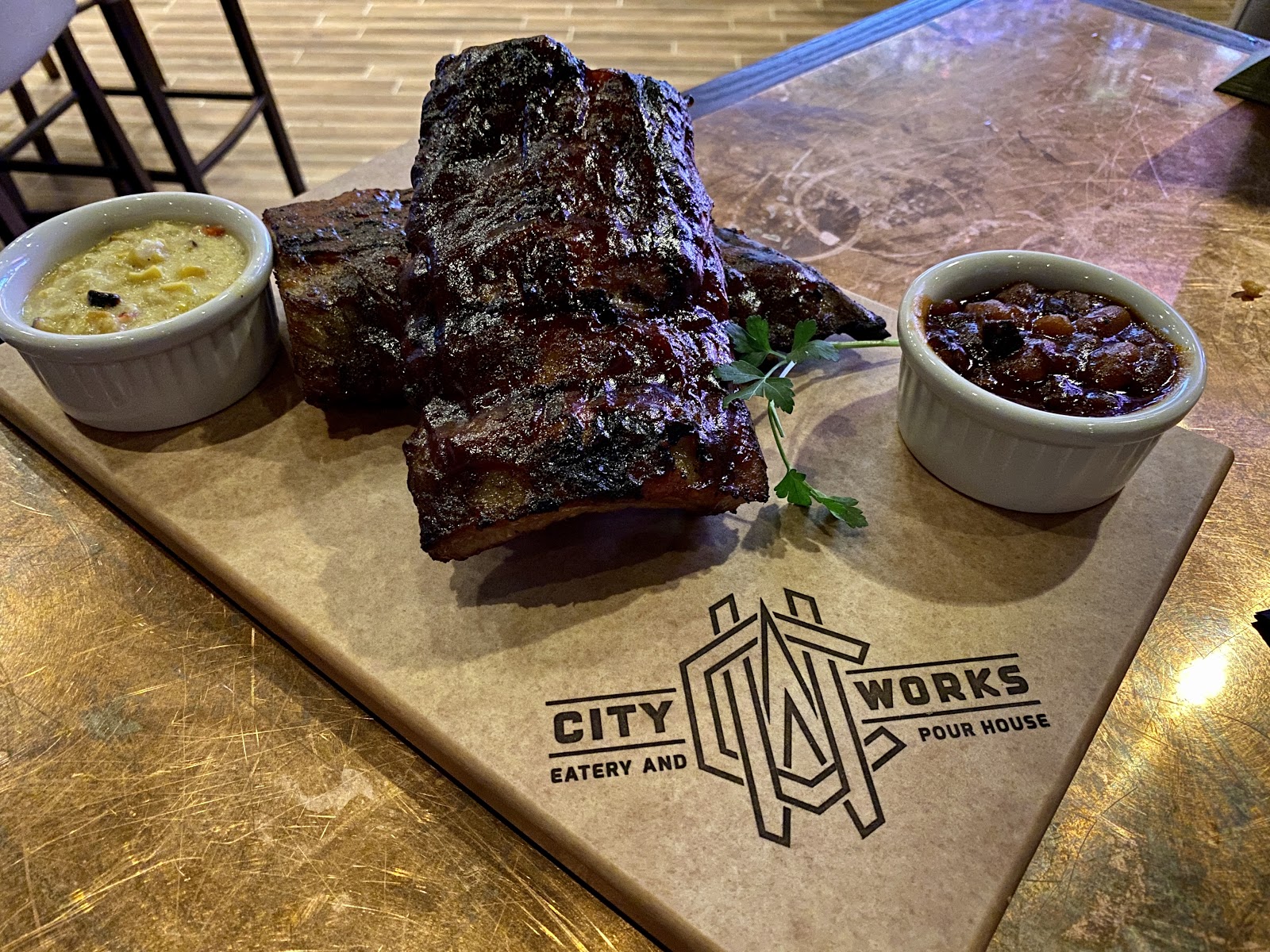 Like I said, I am not a big sports fan. And while I may have PTSD from the days of being seated in the viewing room of ESPN Zone at the Disneyland Resort’s Downtown Disney, City Works doesn’t overpower you with the games. Instead, they actually offer CHIVE TV on some of the smaller screens, with videos of people doing things that can make you go “wow” or cringe in pain due to trying something that normal people shouldn't. This may just help those of us not interested in what’s happening on the big screens to at least look like we are. If I had to chose one reason to return to City Works it would be the dessert. We asked our great server Lexx for her recommendation and, before we finished asking, she said the Peanut Butter Snickers Pie with an Oreo cookie crust, peanut butter mousse, whipped cream, Snickers, chocolate and caramel sauce. Having never missed a dessert in my life, this still stands among the best ever with not only an amazing taste but also a presentation that I would expect to find at a five-star restaurant — but with more sauce. This dish has been a topic of conversation at least once a day since this meal. 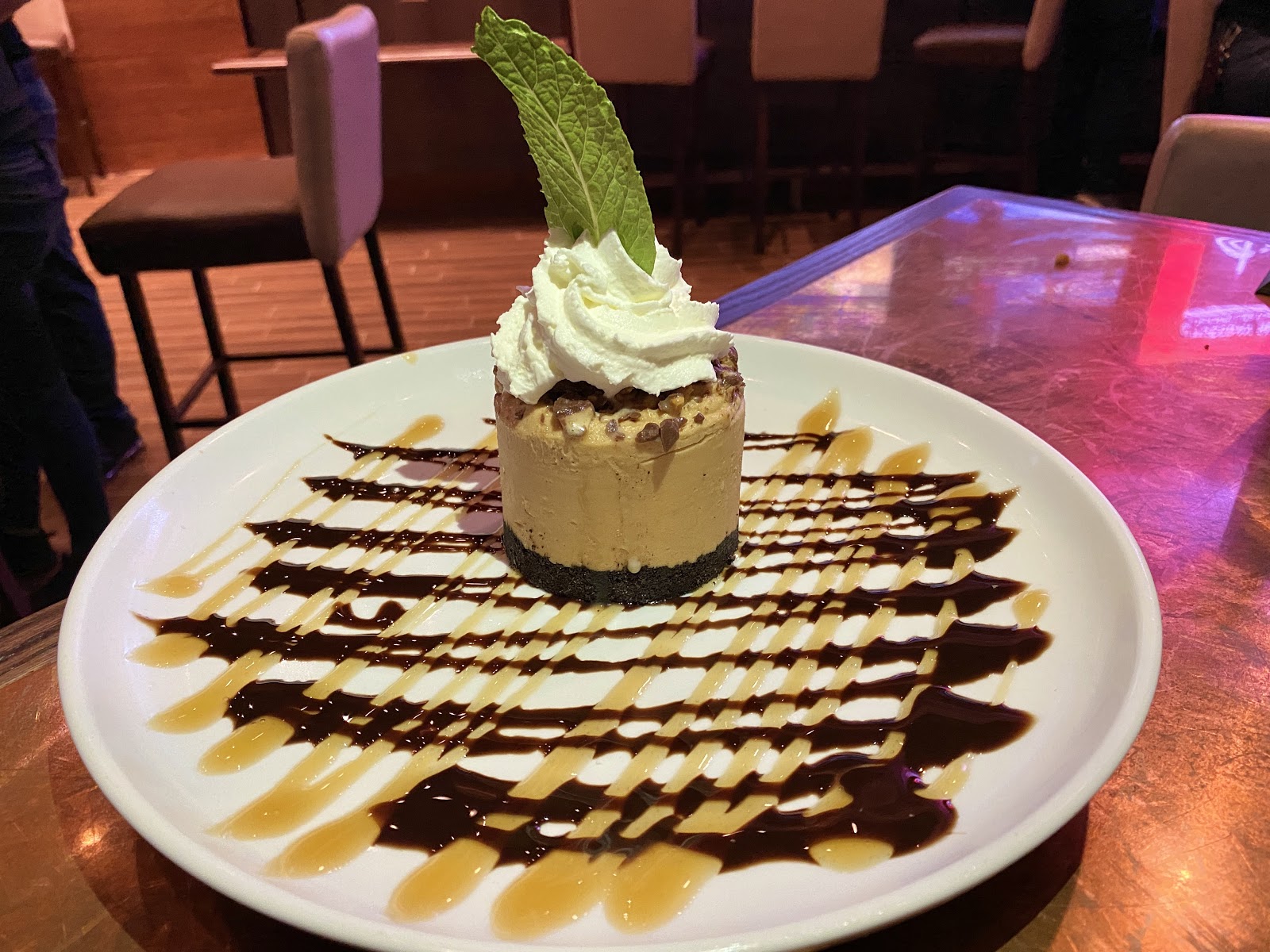 City Works also offers breakfast all day and has a Rock n’ Roll Brunch on weekends until 3 p.m. for those of you who enjoy the best meal of the day anytime of day. Hours vary and reservations are recommended, so to start planning, head to City Works as they have all you need for a great meal outside the parks.