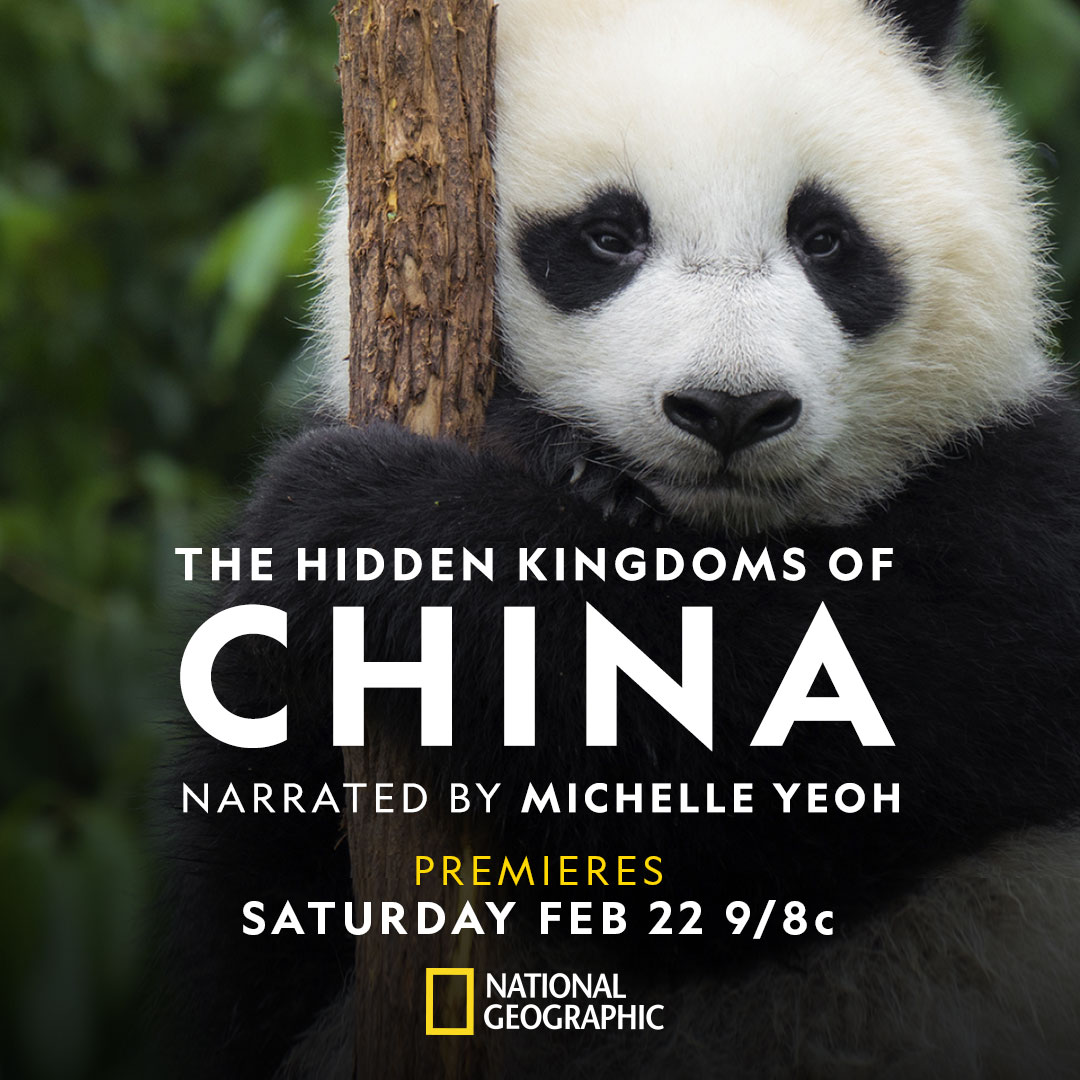 National Geographic takes viewers to hidden remote regions of China in a new documentary feature called The Hidden Kingdoms of China. The vast expanse of the country is put into perspective, with jungles larger than the state of California and some of the highest altitude mountains anywhere in the world. This is China as few have ever seen it.

Narrated by Michelle Yeoh (Guardians of the Galaxy Vol 2., the upcoming Avatar sequels), this special look at the wildlife of China includes some species you might expect and some that you likely never even knew existed. It all starts with bamboo, with the country being known as the “Kingdom of bamboo.”

Nestled within a bamboo forest, we meet a mother panda and her newborn cub, who will depend on her for two-years before being ready to go off on his own. Low in nutrients, pandas spend most of their day eating as much bamboo as they can get their claws on.

Pandas were a centerpiece of the 2016 Disneynature film Born in China and The Hidden Kingdoms of China also features two of the other animal stars, snub nosed monkeys and snow leopards. Similar to Born in China, each of these species also have young babies that are being raised, but that’s not really the focus of this National Geographic documentary. Instead, it crafts a narrative about the diversity of nature in China and the challenges of surviving in some of the countries most extreme wild areas.

The Tibetan fox is a pack animal featured that has a hard time raising cubs amidst forces of nature and other predatory packs. These serious moments are juxtaposed against more lighthearted fare, like the Himalayan Marmot, also known as the “Tibetan Snow Pig,” part of the squirrel family and similar to a North American groundhog. The majority of the footage in The Hidden Kingdoms of China is spent on the wonders of nature and some truly incredible creatures, but there are moments of sadness and hard truths.

My favorite parts of the feature were from the jungles of Yunnan Province, a location with some of the most biodiversity on earth. You’ll get to see some vibrantly colored bugs, including the most interesting caterpillars you’ve ever seen. There’s also a focus on birds of the jungle, including the colorful Hornbill and the challenges of finding food. Mating is part of the special as well, with a pair of frogs finding a safe place to lay their eggs in the rivers of the jungle.

The Hidden Kingdoms of China will widen your world by giving you a better understanding of the biodiversity of China, a country equal in size to the United States and with just as much variation in terrain and climate, if not more so. You’ll see beautiful sights like never before through the hard work and dedication of the National Geographic team that brings you this extraordinary footage. And you’ll feel a deeper connection to nature by learning about some extraordinary animals.

© 2021 Logo, contents and media copyright Laughing Place Inc. unless otherwise noted. All rights reserved. Laughing Place is a dedicated group of Disney fans, like yourself, who love Disney. Laughing Place is not endorsed by or affiliated with the Walt Disney Company, or its subsidiaries. By using this website you agree to Laughing Place’s User Agreement and Privacy Policy. Contact us at: [email protected]ghingPlace.com or 404-594-4577.