Whether you’ve only been to one Disney park or have visited every resort multiple times, there’s no doubt that Disney is a special place. And while all the resorts worldwide have elements that feel the same and feel like “Disney,” each one offers a wholly unique experience. As different as these locations are, so too are the things we love about them. Since the parks are closed, we thought it’d be fun to share photos of our favorite places in the Disney parks and resorts. Several members of our team offered up pictures of the areas/views at Disney resorts that are special to them. For some it’s a tranquil escape amid a busy park day, for others it represents all the magic that awaits you, and for our youngest member, it means outrunning Kylo Ren! Below is the series of photos we’ve shared on Instagram of these fantastical places. Enjoy! “I love aerial views, and there aren't nearly enough of them at Disney parks. But last September, Walt Disney World added something that finally makes those dreams come true. The Disney Skyliner comfortably and quickly transports guests between Art of Animation, Disney's Hollywood Studios, Caribbean Beach, the Riviera Resort and EPCOT. But most importantly, it does so with beautiful, aerial views of Walt Disney World. I truly love riding it as much as doing almost anything in the parks. Right now, it is my single favorite place to be.” “My favorite spot at Disneyland (which happens to be my favorite Disney theme park) is the waterfall behind Pooh Corner in Critter Country. It’s way in the back left corner of the park and not a lot of people even know it’s there, so it tends to be a fairly peaceful place to take a breath and appreciate the faux-natural beauty of the berm surrounding the Happiest Place On Earth. I also like that this water feature turns into a stream that flows past the Many Adventures of Winnie the Pooh attraction, under the entrance ramp to Hungry Bear Restaurant, and on into the Rivers of America.” “At the base of the Bay Slides at Typhoon Lagoon, you'll find a seating area where the waves of the surf pool provide refreshing splashes as you watch your child slide over and over. Perfection!” “You’re at a crossroads, a harmonious circular courtyard that presents a world of unique options. You can choose the exotic splendor of Adventureland, the rustic charm of Frontierland, the shiny future of Tomorrowland, the enchanted fairytale kingdom of Fantasyland, or follow Walt Disney’s suggestion and head back through his turn-of-the-century childhood on Main Street U.S.A. And beyond these options lies even more possibilities: a land inhabited by your favorite cartoon stars, a jazzy square of New Orleans culture, a place where the critters roam freely, and a galaxy far, far away. With flowers constantly in bloom and pink flowering trumpet trees, the hub is my favorite place in Disneyland Park.” “While I couldn’t find a picture of my exact favorite spot, this was as close as I could find. Truly, my favorite place is grabbing a Dunkel beer from the Germany Pavilion in the World Showcase and taking it to the little area that juts out into the World Showcase. It has an amazing view, and is simply peaceful and sublime.” “There are plenty of picks I could have made for nostalgic reasons, but I don’t think there’s ever been an area of a Disney park that had me in such awe as when I first set foot into Mysterious Island at Tokyo DisneySea. Not only does this Jules Verne wonderland embrace a steampunk aesthetic on the grandest scale but also has a kinetic energy that’s akin to what I love about many a Tomorrowland. That latter point is somewhat demonstrated by the boat going by in this photo, however not seen here are the ride cars that launch out the side of Mount Prometheus nor the flames that occasionally shoot out from said structure. On top of all that, there are plenty of tasty treats to enjoy, mini crevices and paths to explore, and so much more. I could seriously spend hours just in this one relatively tiny land and have the best time.” “It is an amazing feeling to board the Resistance Intersystem Transport Shuttle or ITS—one you can get only at Disney. It really feels like you are flying into space and engaging in a fight against the First Order.” 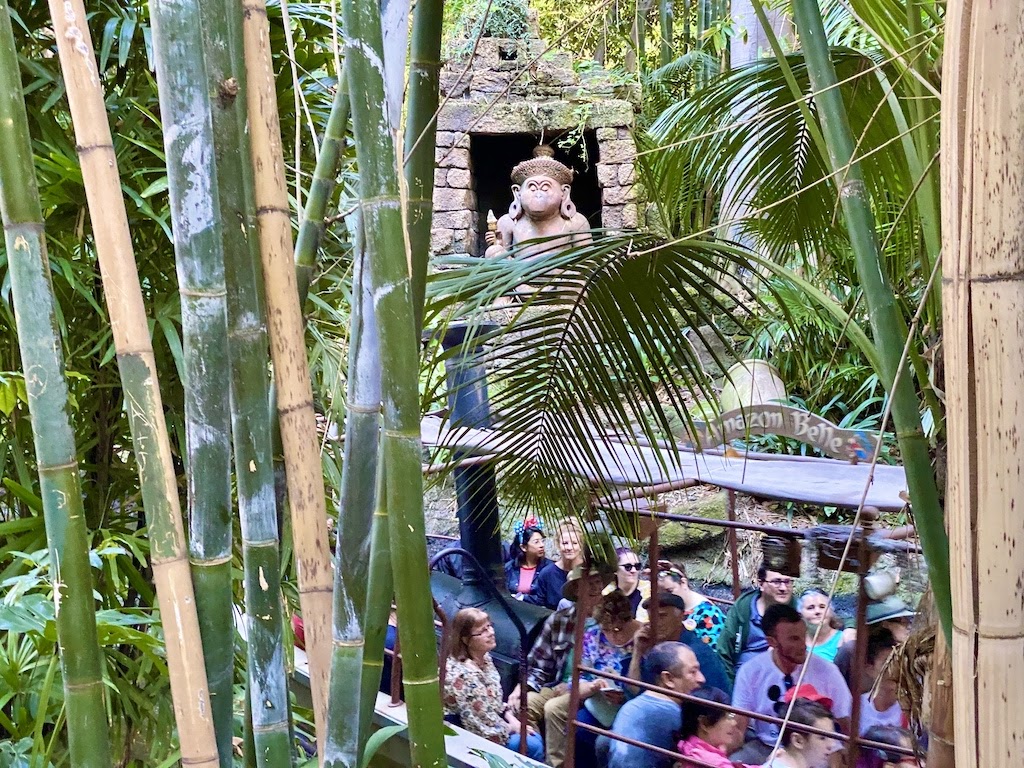 “The deep dark jungles of Adventureland for almost 40 years could only be seen from a Jungle Cruise boat or from the Swiss Family Robinson Treehouse, that was till 1995 when the Indiana Jones Adventure opened. Growing up I loved the Jungle Cruise with its sights, sounds, and bad jokes but it wasn’t until a Forbidden Temple was unearthed by Dr. Jones that this view could be seen. While both attractions are in my top 10, this spot at the exit is where I always end up whether I go on the rides or just am enjoying the park. If you time it right—between boats and guests exiting Indy—you might have one of the most perfect moments where all you hear is the sounds of the jungle and the “generator” keeping the lights going in the queue. I can honestly say that out of all the spots in all the parks around the world this one truly is an adventure unto itself.” “Much of your day at any Disney park is going to be filled with a lot of energy and noise. Sometimes, it’s nice to escape that for a bit and get to a nice quiet place where you can just take in the scenery. The trails on Discovery Island at Disney’s Animal Kingdom will allow you to walk right up to (and at some points under) the breathtaking Tree of Life. Very few guests actually venture over here so it’s nice and quiet and provides some great photo opportunities.” “Disney’s artificial mountains have always been a work of art, and Grizzly Peak is my favorite of these pieces. Having grown up on the west coast taking the annual Disneyland trip, I was there shortly after it opened when the mountain was large and imposing and I continue to visit to this day where sometimes the peak is hard to see as it is surrounded by the trees which make this area so much more authentic. It harkens back to the original Walt quote, “Not only can I add things but even the trees will keep growing; the thing will get more beautiful every year.” The Mountain Pass that runs behind the queue for Grizzly River Run over to the San Francisco area, with the abundance of trees (becoming quite rare in the parks, sadly), all the cascading waterfalls, the soft, yet triumphant music playing, and the added entertainment of geysers soaking rafters (where I and others have spent literal hours just watching) this area is easily one of my favorites. And on top of that, even though when the park first opened nobody really needed a respite from the crowds, now the Mountain Pass provides a nice quiet break from the bustling sister of Walt Disney’s original park.” “Of all the places you could stop along the boardwalk, I think the BoardWalk Bakery offers the best views of Crescent Lake and its neighboring resorts. Once upon a time, I was a Cast Member at this very bakery. Sometimes walking those backstage halls, I would sing Sunset Boulevard to myself: ‘The atmosphere as thrilling here as always. Feel the early morning madness. Feel the magic in the making,’ which perfectly summed up every day. Whether watching the sunrise from behind the glass, jogging after a rare late night shift, heading back from EPCOT or Hollywood Studios at sunset, or visiting as a guest, there is just so much I love about this resort. To this day, I still feel giddy each time I set foot on those wooden slats.”

Well, what did you think? Are any of these places you favorite? Leave a comment and let us know!