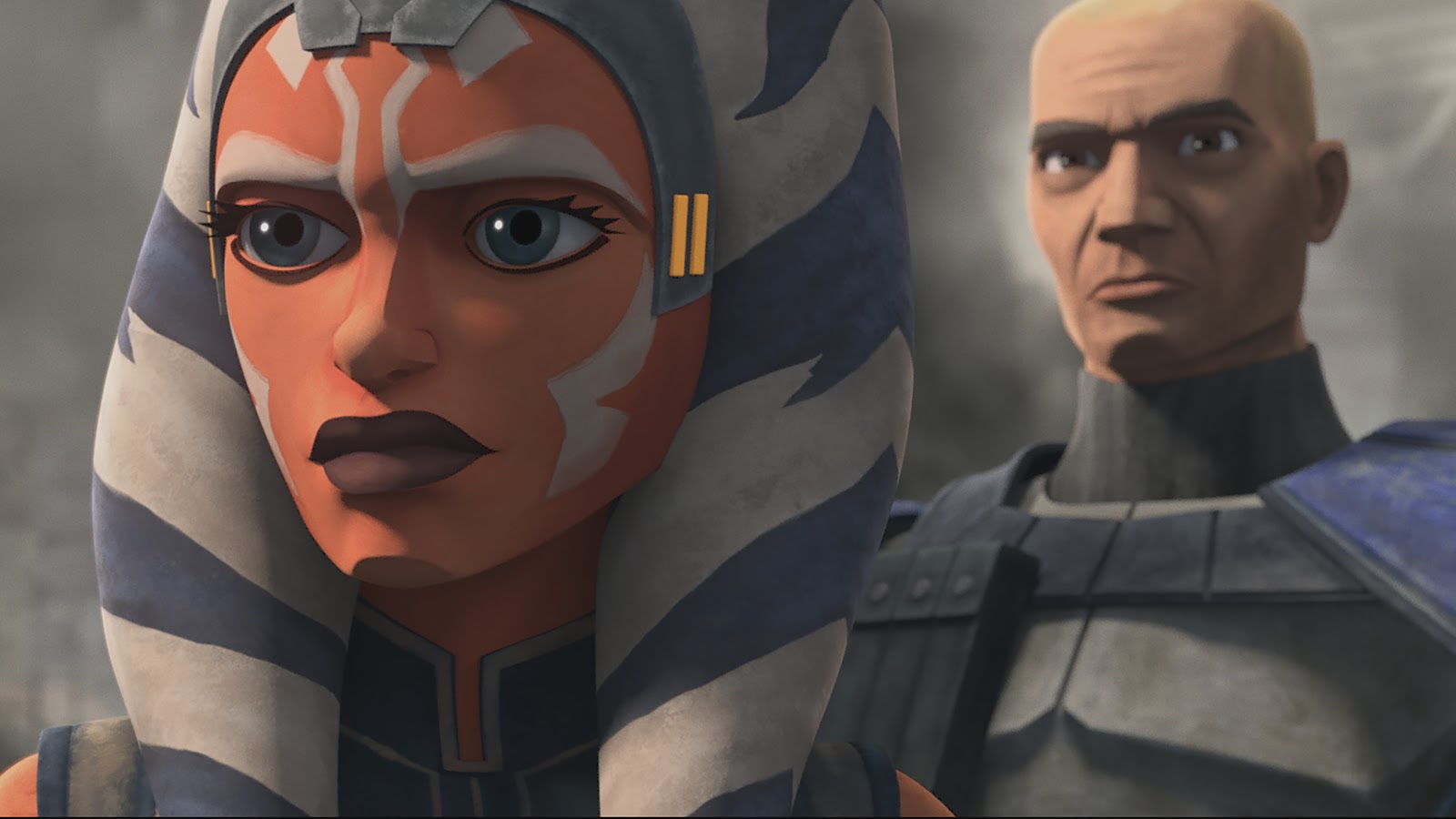 “You actually captured him. I’m impressed,” says Bo-Katan. “I’ve learned from the best, including you,” replies Ahsoka, who then implies that Bo-Katan should become the new leader of Mandalore. “I wish I was good as something other than war,” Kryze confesses. Captain Rex (Dee Bradley Baker) wants to bring Maul back to stand trial in front of the Jedi Council, so he and Ahsoka prepare to leave for Coruscant. Ahsoka enters into a holo-meeting between some of the Jedi Masters, just after Mace Windu (Terrence Carson) gives his famous “I sense a plot to destroy the Jedi” speech from Star Wars: Revenge of the Sith. “A great service to the Republic, you have done.” Yoda (Tom Kane) thanks Ahsoka for capturing Maul and asks if she had acted as a Jedi. “No, not yet,” she admits. She asks to speak with her old master Anakin Skywalker, but is told he has gone to confront Chancellor Palpatine. When the transmission ends, Rex says, “You didn’t tell him what Maul said about General Skywalker,” meaning that Anakin is destined to become the next Dark Lord of the Sith, and it’s clear Ahsoka is still troubled by the matter. The Mandalorians deliver Maul to the Republic dropship in an ancient transport chamber, which Bo-Katan says is the last one left over from the planet’s previous war against the Jedi. She then bids farewell to Ahsoka, who takes off for Coruscant with her clone trooper companions.

On the ship, Maul suspiciously looks out through the eye-holes in his containment chamber at Ahsoka talking with the troopers. They land on a capital ship and put Maul in a more secure cell, though he also remains within the chamber. Ahsoka is saluted as she enters this ship’s bridge, but something seems off as they enter into Hyperspace. Ahsoka speaks quietly with Rex: “As a Jedi, we were trained to be keepers of the peace, not soldiers.” Rex tells her the clones have mixed feelings about the war, since most people wish it had never happened, but they wouldn’t exist without it. Reaffirming their friendship, Ahsoka says, “Perhaps some good has come from all of it.” 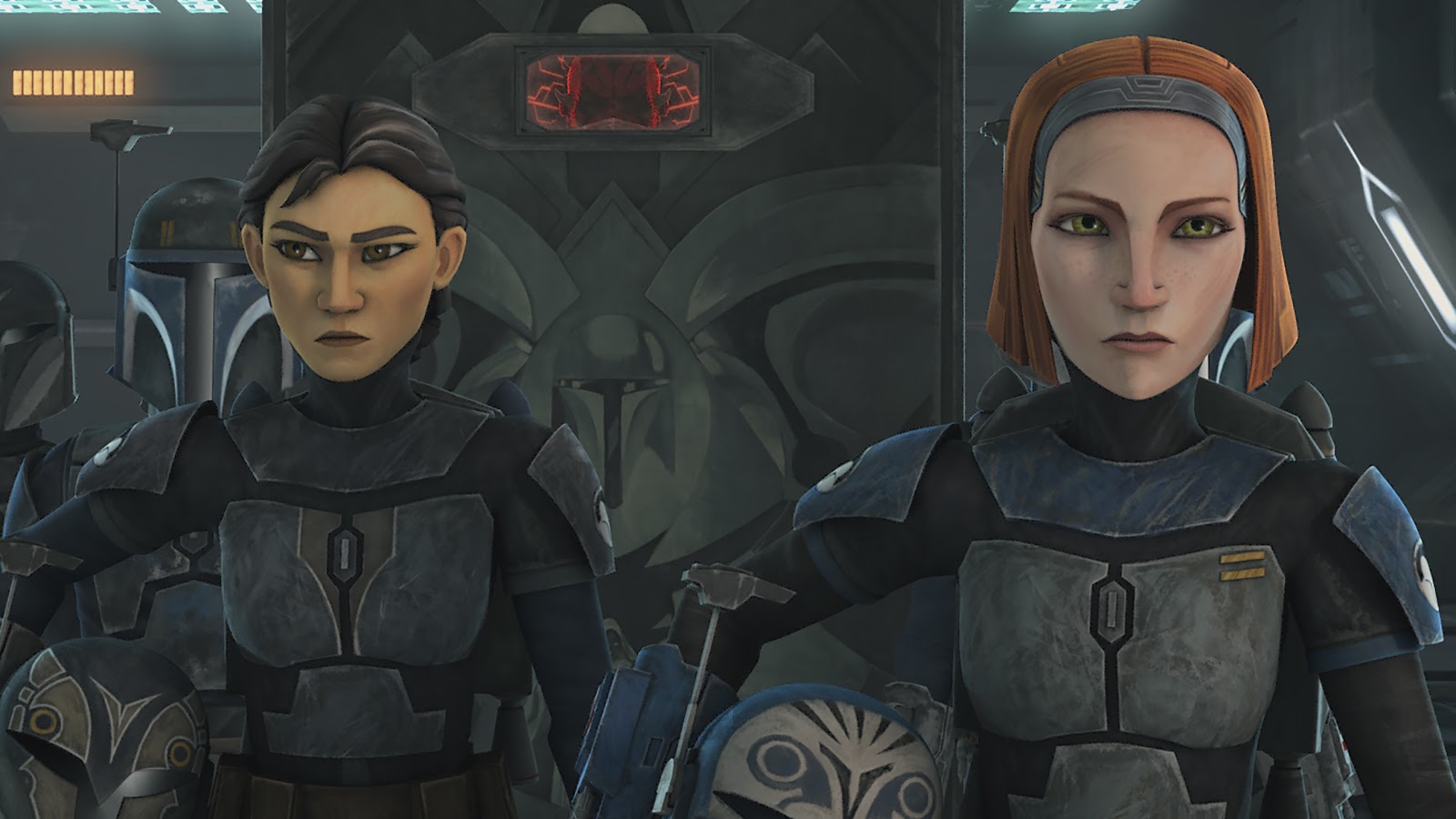 Rex is called away for a briefing while in his cell, Maul suddenly senses something and wakes up. Ahsoka begins hearing Anakin’s (Matt Lanter) tortured voice as the newly renamed Darth Vader murders Mace Windu on Coruscant. Then we see Rex receiving a transmission from Palpatine/Sidious: “Execute Order 66,” the Sith Lord commands. Rex drops his helmet and spins around, fighting the impulse and shedding a single tear. He raises his blasters against Ahsoka along with other troopers on the bridge, but Ahsoka defends herself successfully, disappearing in a cloud of smoke and cutting her way through the ceiling.

Rex orders the execution of Maul and briefs the other clones about how the Jedi have committed treason against the Republic and must be eliminated. A few troopers release Maul from his chamber, but they’re knocked out by Ahsoka before they can kill him. She demands to know if Maul had anything to do with this madness. “It was not my doing,” he says. “The clones turned against me. Even Rex,” she confides in her enemy. Maul murmurs that he believes Sidious’ plan to be brilliant: “He turned the Jedi’s own army against them.” He thinks Ahsoka is ready to form an uneasy alliance, but she rebukes him: “I need a diversion, and you’re it,” she tells him as she sends him to cause chaos around the ship. 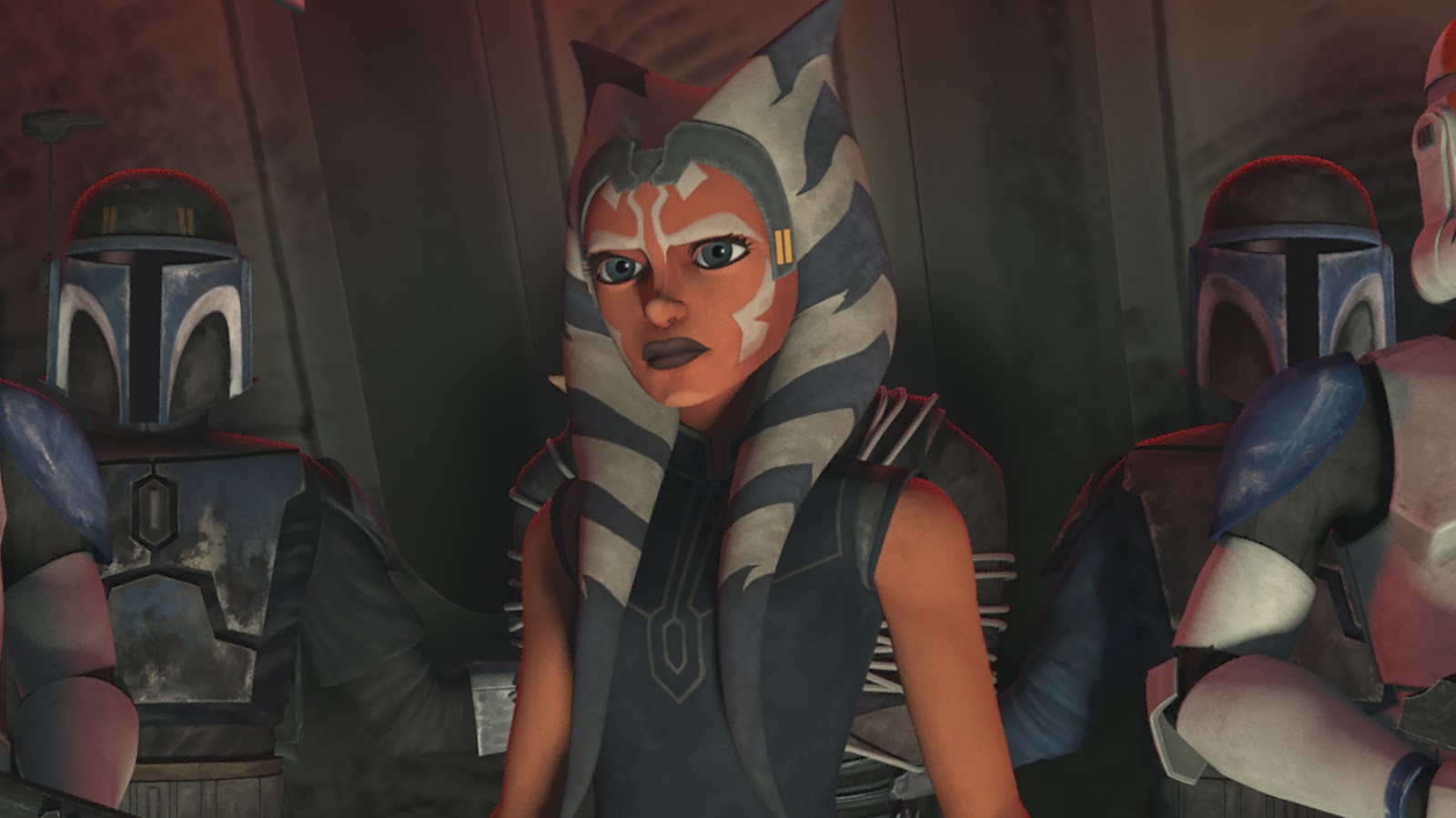 The clone troopers begin destroying the escape pods and increase security so the Jedi and Sith they have aboard cannot get away. Ahsoka continues sneaking around and powers up a bunch of Astromech droids. She has an R7 unit patch into the central computer and bring up Rex’s file, where a holo-recording of the Kaminoan Nala Se (Gwendoline Yeo) states that the captain had a malfunction in his inhibitor chip. It seems Rex had submitted a grievance report suggesting that there may be an alternate purpose to the chips. Meanwhile, Maul is wreaking havoc on the troopers, slicing off some of their heads and limbs with wall panels and blast doors. Ahsoka appeals to Rex via hologram then has the R7 droid incapacitate him, bringing him to the ship’s medical bay.

They seal the doors behind them as R7 and an FX-7 medical assistant droid scan Rex’s brain, though they can’t immediately find the inhibitor chip. Ahsoka uses the Force to connect with the clone, repeating the mantra “I am one with the Force, and the Force is with me” until she is able to locate the chip. She orders the droids to perform surgery as the other troopers begin to break through the door. Thankfully, just as it seems all hope is lost, Rex abruptly wakes up and takes out his former squadmates. The door slides shut as he apologizes to Ahsoka and tells her, “It’s all of us. The entire Grand Army of the Republic has been ordered to hunt down and destroy the Jedi Knights.” The troopers outside begin slicing through the door again as the episode cuts to credits in a dramatic cliffhanger.