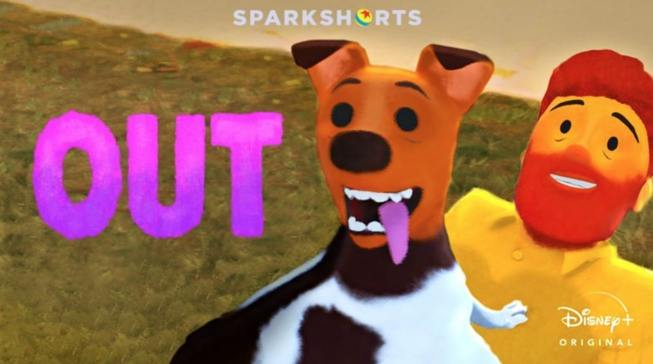 Pixar’s SparkShorts experimental film program has taken on some pretty heavy topics throughout the series. Dog fighting, glass ceilings, and autism are just a few of the themes explored so far. The newest short approaches the difficulty of coming out as gay to your parents in Out.

Greg is moving to the city with his boyfriend Manuel when his parents surprise him by showing up to help him pack. He hides a framed picture of him and his boyfriend and through some divine intervention, he accidentally switches bodies with his dog, Jim. Now in his dog’s body, Greg tries desperately to stop his mom from finding the picture, only to hear a moment of confession from her that tells him it’s time to come clean.

The animation style of Out strives for a 2D look. Rather than cel shading, it approaches it more like works of chalk art. The style feels somewhat related to Kitbull, although this short is a lot more colorful. Greg wears a bright yellow flannel shirt and has red hair and a beard that pops. The short also pulls in a rainbow esthetic to tie in the LGBT+ symbol.

With strong Canadian influence, Greg’s silent dad looks like your stereotypical macho man, which tells part of the story of why Greg might have such a hard time coming out to his parents. The fact that Greg ends up switching bodies with his dog adds a lot of fun to what otherwise would have been an overly dramatic piece. In fact, most of the short feels light, starting with the opening.

While Greg and Manuel are by no means a stereotypical gay couple, Out wholly embraces the broader culture. It’s sure to alienate a lot of same sex couples who don’t identify with all of it, but a rainbow literally beams down from the sky with house music blaring to deliver Greg’s equivalent of a fairy godmother, a glittery pink and purple dog and cat. They’re the ones responsible for the body switch that happens in the story. Another stereotype in the short is a working man of the month calendar that becomes a visual gag.

Out is a sweet story that highlights the stress, anxiety, and fear that comes with coming out to your parents. It’s done in a lighthearted way through a body swap story with the owner’s dog and while it’s far more simple than the reality of the situation, it can help educate parents about what their sons or daughters experience leading up to that stressful moment.