Readers will be excited and a little bit scared as they dive into the world of La Llorona and Mexican folklore with Tehlor Kay Mejia’s Paola Santiago and the River of Tears. In the latest edition to the Rick Riordan Presents Banner, we are introduced to our title character Paola Santiago who is on the cusp of 7th grade, obsessed with space, and making sense of the mythical tales and superstitions that her mother has embarrassed her with since she was a child. 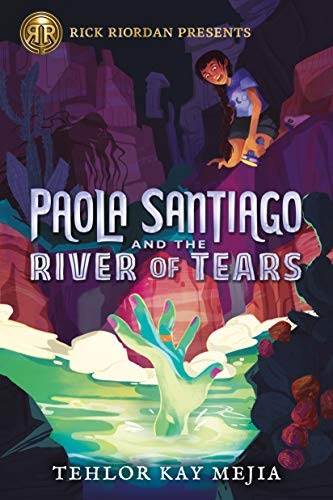 Set in Silver Springs, Arizona, Paolo lives on the edge of town at a rundown apartment complex. She spends her days with her best friends Emma and Dante stargazing and snacking on junk food. Dante lives with his abuela at the same apartment complex as Paola, while Emma comes from a more upper-class family from a different side of town. These three friends do not let family dysfunction or wealth keep them from being kids. When Emma disappears and the police turn up no leads, it’s up to Paola, Dante, and some magical items from Dante’s abuela to find her and save the world.

I have read all previous Rick Riordan Presents novels, which I thoroughly enjoyed, but when I started Paola Santiago and the River of Tears, I didn’t know what to expect. Paola is a compelling and likable character that readers will quickly plant roots with on the first page, and then connect with her as she learns the truth about what happened to Emma and other missing children in the desert. While the book has multiple mythical elements that highlight Mexican and Mexican-American folklore author Tehlor Kay Mejia has seeded the book with modern day real life elements of horror that is far scarier than La Llorona.

The scariest part of the book is Paola’s interactions with the police when they report Emma missing. The bigotry and racism that Paola experiences because of how she looks is shocking, but a true reflection of what many Latino people experience. From mentioning the caging of migrant children, to the story of Sal, a neighbor of Paola’s, whose parents were arrested by Immigration, the terror of La Llorona is nothing compared to what she sees every day with non-mythical people.

Paola Santiago and the River of Tears follows standard plot devices that previous books in the Rick Riordan Presents has shown, Mejia brings to life characters that are rich and detailed thanks to her skilled and superb writing ability. Emma may come from a wealthier family, but I love the fact that Mejia made Emma a good person who cares about her friends and didn’t think less of Paola and Dante for their living situation. Emma believes in her friends from the beginning of the novel and even when held captive by a demonic force, she taunts La Llorona about how she won’t be able to defeat Paola.

Dante is very much the same as Paola, but he has a more accepting attitude toward the stories and mythology of Mexican culture that Paola feels are nonsense. He is a true friend, who cares deeply for Paola, and the only real danger that he and Paola face is that awkward moment when teenagers who have been friends for years start to develop feelings for each other.

Paola Santiago is the smartest kid in the room, with a thirst for knowledge and a wisdom that is not demonstrated by many. She has a chance to make all her dreams come true instantly, but Paola wants to earn her success and not be given it by a mythical force. She has doubts about her intelligence and worth, but she is a teenaged girl who has normal doubts and fears added on to the mountain of disparity that she lives with each day.

Every great middle grade modern day mythology story needs a camp for the protagonist to hang out in, and the world that Paola finds in the desert of Arizona is a place like no other. The Ninos de Luz are a group of child warriors who fight the demons of the night, like Chupacabras and other monsters that try to sneak out of the darkness. At the camp, Paola and Dante meet Marisa and Naomi, children who lead the camp of kids as they try to protect the world from the escaping monsters.

At every step in her journey, Paola is told that she must stop, or that what she wants to do is not possible. Saving her friend Emma is impossible as she learns from Marisa and Naomi. Paola won’t be stopped, because as she learns on her journey, confronting the phantom that is La Llorona is unavoidable.

From the first word to the last, readers will cheer for Paola in her battle with demonic forces, and you will cringe with fear in the real terror that Paola experiences from human treatment. I feel like every time I read a Rick Riordan Presents Book, it’s like I have a reservation at Michelin Star Restaurant, which just happens to have multiple Michelin Star Chefs serving a variety of meals. Each time I have finished a book from this imprint, I have come away content and excited for the world that was gifted to me in the printed form.

Paola Santiago and the River of Tears has its moments of fear, but the brilliance of the book is how author Tehlor Kay Mejia has brought us another fresh face to the literary world with her heroine Paola, and how sometimes the most frightening aspect of the story is what people experience in everyday life.

Four Stars out of Four for Paola Santiago and the River of Tears. The book will be released on August 4th.