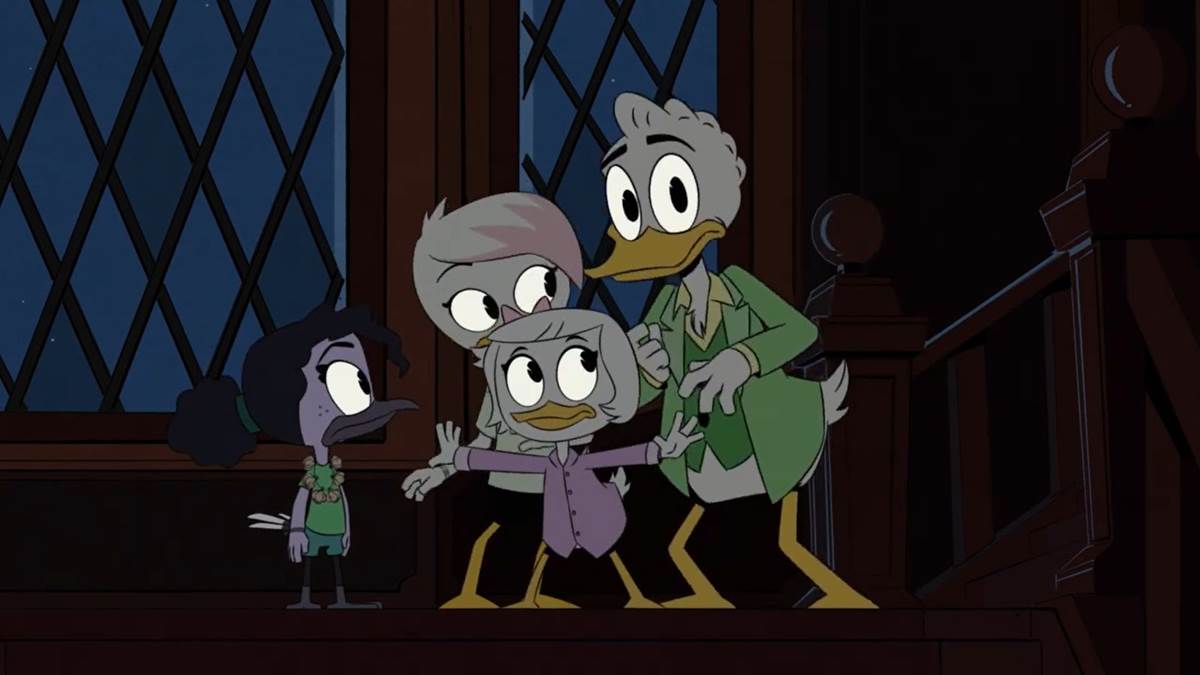 After a four-month hiatus over the summer, DuckTales has finally returned to Disney XD with new episodes, continuing the show’s already-in-progress third season. And the first installment of this autumnal batch of fresh outings– entitled “The Phantom and the Sorceress!”– focuses on young Webbigail Vanderquack (AKA Webby, voiced by series regular Kate Micucci) and her friends. It’s a not-unwelcoming break from regular adventures featuring Uncle Scrooge McDuck (David Tennant) and family, though it’s odd that this mid-season premiere would highlight what are mostly otherwise supporting characters instead of re-establishing a norm for the show.

But speaking of supporting characters, this episode also makes terrific use of Donald Duck’s usually-lucky cousin Gladstone Gander (returning guest star Paul F. Tompkins), who has found his uncanny power of good fortune absent after a stealth attack by this week’s vengeful villain, the deep-cut Disney reference Phantom Blot (Giancarlo Esposito of Breaking Bad and The Mandalorian). This baddie resembles a spectral executioner wielding Thanos’s Infinity Gauntlet, and he’s seeking to eliminate all magic from the world because of a past experience he had with– you guessed it– first season “big bad” Magica De Spell (Catherine Tate of Doctor Who). 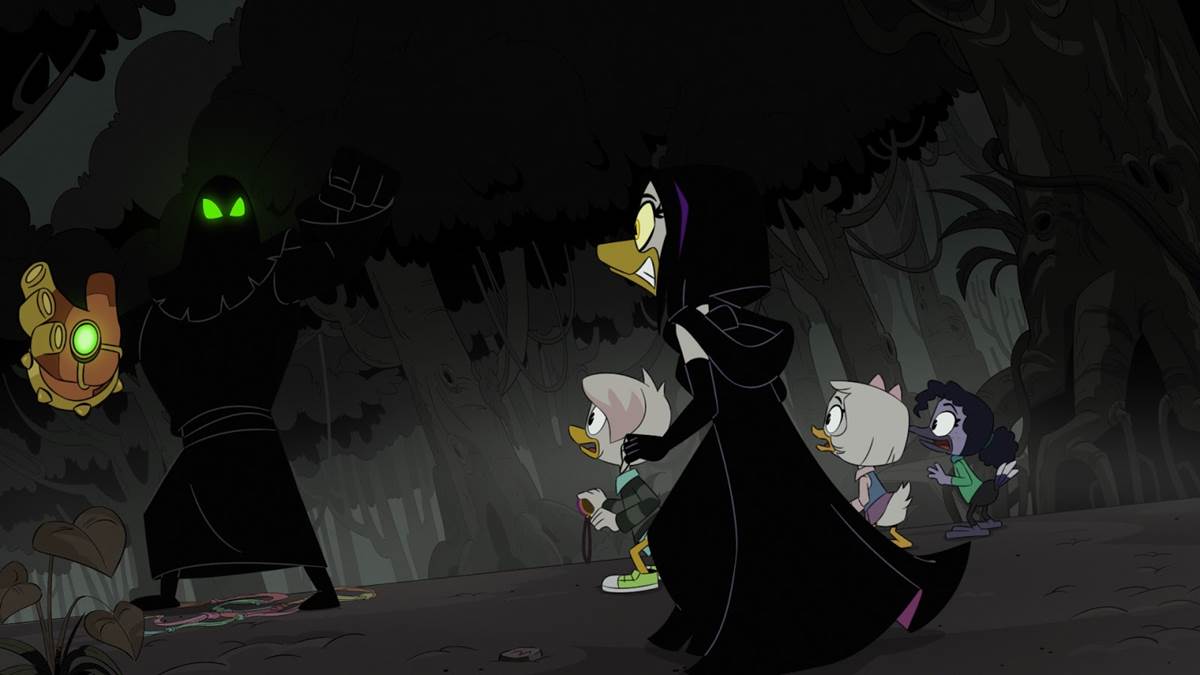 And Webby’s best friend, of course– the recently re-corporealized Lena (Kimiko Glen of Spider-Man: Into the Spider-Verse)– is a progeny of Magica’s magic, so the Phantom Blot’s quest puts her in direct danger of non-existence as well. This leads Webby, Lena, Gladstone, and the ever-precocious Violet (Libe Barer) to seek out Magica in her swamp hut and learn how to out-magic the magic collector thanks to a fun training montage set to a clever original song. Despite this being a webby-centric episode, we do also see glimpses of Scrooge and nephews Huey (Danny Pudi), Dewey (Ben Schwartz), and Louie (Bobby Moynihan) embarking on their own off-screen exploit, and we’re treated to an cold-open in which the kids escape a video game brought to life by Lena’s powers, which serves as an impetus for the former shadow of Magica to seek out a way to bring her own abilities under control. Overall, I thought “The Phantom and the Sorceress!” was a lot of fun, and I especially liked the exploration of how Gladstone Gander handles his newfound unluckiness. It’s also cool to see the Phantom Blot– a character with a very long, storied fictional history in Walt Disney Company-produced comic strips, comic books, and animation– featured in such a pivotal (though likely one-off) role… and voiced by such a talented and accomplished actor.

Next week: “They Put a Moonlander On the Earth!” 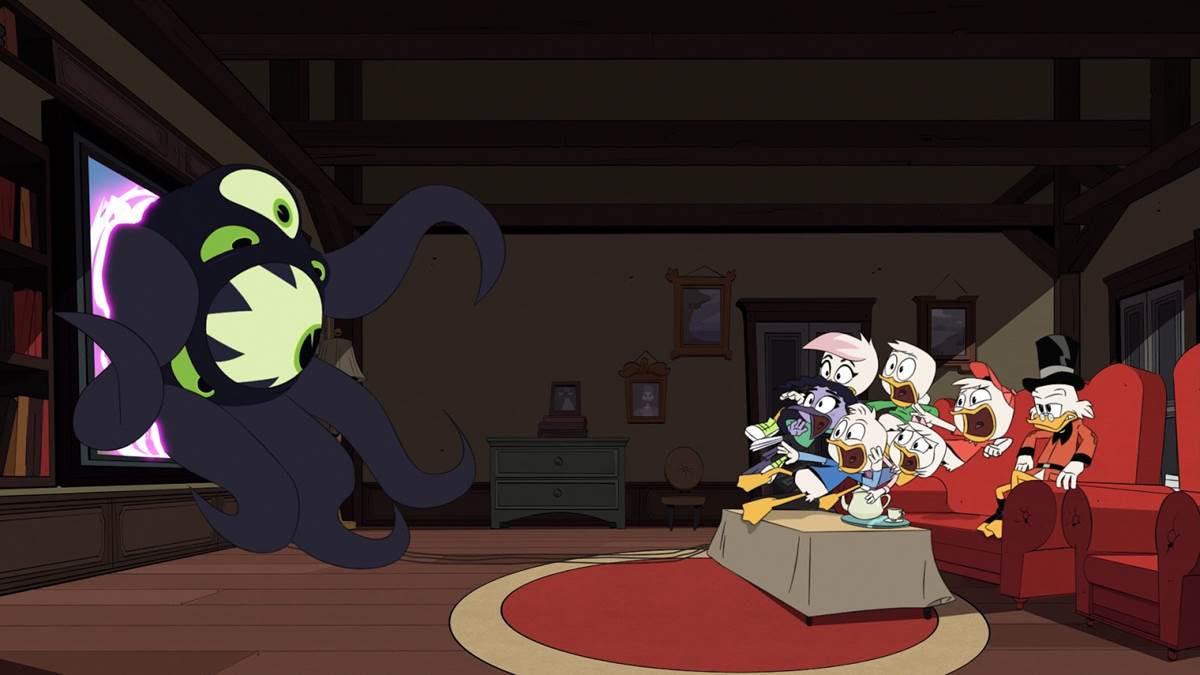