Do you suspect that there might be more to Walt Disney World than first meets the eye? If yes, you are certainly correct. There is so much more to Disney Parks in Orlando, Florida than you would otherwise realize on your first, fourth, or even 10th visit. Author Susan Veness lets us in on more than 600 secrets of Magic Kingdom, EPCOT, Disney’s Hollywood Studios, and Disney’s Animal Kingdom in the upcoming third edition of The Hidden Magic of Walt Disney World. 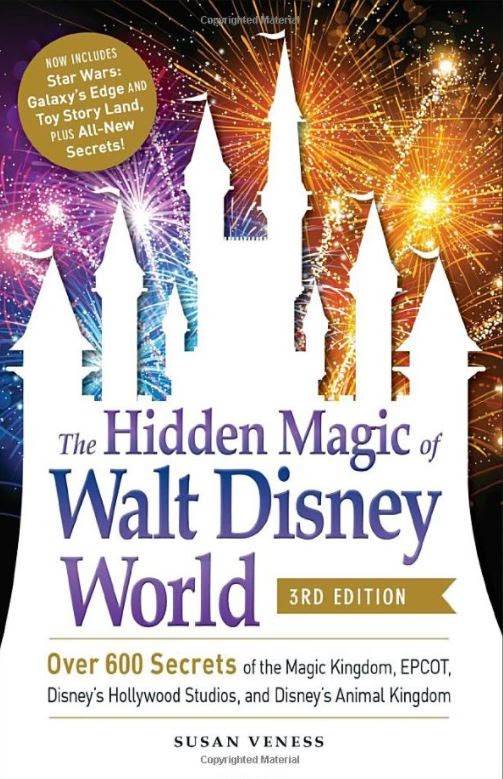 How does the third edition differ from the first and second editions of Hidden Magic?

The first edition covered more obvious park features and secrets and explored the “why” behind them. The second edition updated the first, congruent with new additions to the parks, and took a deeper dive into the mysteries behind the Mouse. The third edition attempts to capture what Veness describes as a profound change or shift in Disney storytelling. With the emergence of new worlds within the World, including Pandora and Star Wars: Galaxy’s Edge, even the not-so-hidden details are more subtle but also far more expansive.

What is to love about this book?

So much and obviously all the secrets. Particularly for those die-hard Disney fans, I will eat my hat if you do not learn something new from this book.

The foreword and introduction strike at the heart of what so many Disney Park goers feel – that Disney has an unmatched ability to add “just a little bit more”. That “little bit more” is where the magic really happens. It is a feeling, more than a building or attraction. A feeling that you cannot quite put your finger on but that inevitably keeps you coming back for more. By communicating this sentiment at the book’s beginning, Veness immediately draws upon the reader’s “Disney emotion”, effectively taking us firmly by the hand and leading us through the rest of the book.

The layout is clear, with each chapter covering a different park and the subchapters exploring the areas therein. There are also high-level maps included to assist in (re)orienting the reader to each park’s layout, as well as a numbered list of key highlights at the beginning of each chapter. Great additions to the book include the ‘Imagine That!’ and ‘Fascinating Fact’ sections which help in breaking up otherwise blocky text. One of my favorite ‘Imagine That!’ excerpts, which provides a good overview for the book and reason for its appeal, is as follows:

Discovering backstories, small details, and hidden references is what this book is all about. Why are these secret gems so appealing? Alex Grayman, art director, Walt Disney Imagineering, explains: “We like to layer in extra things for people who are going to pick up on them. We get it, and a lot of guests eat that up. The more people know about these little things, the deeper they’re going to be connected. We respect where we came from, we acknowledge, we love it, and we live it. It’s fun if you’re a guest who ‘gets’ it. You feel special because you know what it means, and ‘those people don’t know.’”

What is not to love?

The answer to this question depends on what you hope to get out of this book. If you want an easy access, quick reference guidebook while exploring the Parks, this is not the book for that purpose. If you want to read up on Walt Disney World before your next trip in preparation for your mission to discover one or more secrets first-hand, this book is just what you need. In my view, I think it could have done both, but the presentation prevents it from doing so.

As someone who does not live in Orlando and who visits Walt Disney World only one or two times a year, this book would not be easy for me to refer to on the fly while wandering the parks. The book is text-heavy and reads more like a novel. No kid in a candy store is going to read paragraphs of text to decide which new candy he should try, and similarly I am not going to take my eyes off Cinderella Castle, a parade, or even my delicious Disney-inspired food to hone in on a detail that I vaguely recall being somewhere in this book. The average Disney Parks traveler simply does not have the time for that while exploring all there is to do in the Parks.

While the layout is clear, it is the culprit for this book’s lack of quick accessibility. More bullet points, lists, maps and pictures would have greatly enhanced its Park-ready appeal. The numbered lists of secrets at the beginning of each chapter and the index at the end are an attempt to more easily navigate this book but it does not go far enough to make it an effective and user-friendly Park companion.

To buy or not to buy?

The third edition of The Hidden Magic of Walt Disney World is recommended reading (1) for die-hard Disney fans, (2) for curious readers intrigued by Disney history, meaning and secrets, (3) for travelers before their trip to Walt Disney World, or (3) as vacation reading between Park visits so travelers can be on the lookout the next day for what secret gems strike their fancy.

Depending on the individual, it might be a little heavy-handed for Disney Parks’ first-timers or those who simply want to enjoy the more pronounced or obvious magic at Walt Disney World. While it can be left out of your Disney Parks adventure backpack and wait for you back at the hotel room or at home, the third edition of The Hidden Magic of Walt Disney World is a worthwhile treasure to be added to any Disney book collection, especially those who love Disney Parks, Imagineering, history and trivia.