The first arc of Marvel Comics’ recently relaunched Star Wars: Darth Vader title was all about looking forward– Vader embarked on a quest to discover the truth about what happened to his beloved Padmé after the last time he saw her alive. And the second storyline entitled “Into the Fire” is about looking ahead. How does the Dark Lord of the Sith go from the posturing villain we saw at the end of The Empire Strikes Back to the somewhat more sympathetic, introspective Lord Vader who eventually turns against his master Emperor Sheev Palpatine at the end of Return of the Jedi?

“Into the Fire” starts us down that path with a first chapter (in issue #6 of Star Wars: Darth Vader, out today) called “The Punishment,” which returns Vader to Coruscant after his battle against the Naboo loyalist “Amidalans.” It seems Palpatine isn’t too happy with his otherwise loyal apprentice’s personal sojourn, so his response upon Vader's entry into the Imperial Palace is to give him the ol’ Force lightning. Vader defends himself but wonders why he is suddenly persona non grata in the throne room, and what follows is basically an entire comic book worth of torture, as Palpatine reminds the former Jedi who’s boss. Also participating in Palpatine’s assault are the Emperor’s Royal Guards and the oft-overlooked lackey Mas Amedda, who first appeared in Episode I – The Phantom Menace, and serves the Empire all the way through to its end in the current Star Wars canon. Vader gives as good as he gets from these threats, but he’s no match against Palpy himself, who Force-chokes his faithful student and then tears off all three of his mechanical limbs, reducing poor Darth to a single-armed wretch resembling Anakin Skywalker’s final state in Episode III – Revenge of the Sith after battling his previous master Obi-Wan Kenobi. Speaking of that particular conflict, this issue’s second half sees Vader, Palpatine, and Amedda back on the lava planet Mustafar, where two Death Troopers drop the desperate Dark Lord off on a familiar-looking shoreline. The emperor tells him he must use his own strength (not counting Force powers) to rescue himself this time– as opposed to when Palpy saved him previously and first put Anakin into his imposing mechanical armor. It’s an interesting though almost devastatingly dark beginning to this second arc, and it ends with the reveal of a surprise character tied into last year’s Star Wars: The Rise of Skywalker. This should be an interesting trial for Vader, to say the least, and the collaboration of writer Grek Pak and artist Raffaele Ienco is more than up to the task of making it interesting. 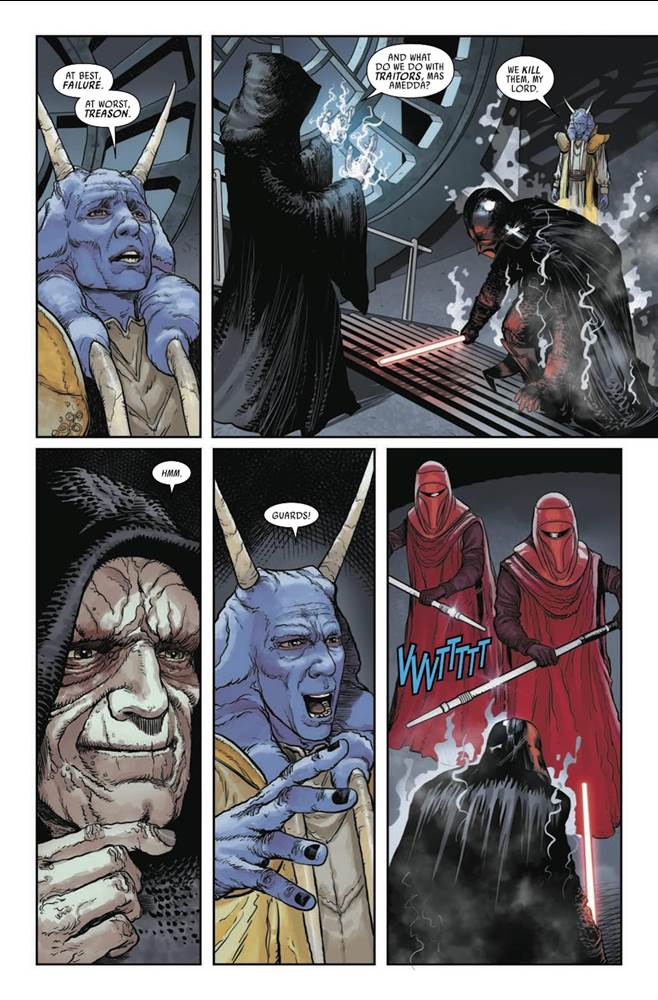