Get ready to laugh as you journey back to Eoin Colfer’s Artemis Fowl universe with his latest tale in the spin off series The Fowl Twins: Deny All Charges. Readers get to catch up with Myles and Beckett Fowl, Artemis’ younger brothers who have their own special talents for getting into mischief and creating international incidents. Myles the brains and Beckett the brawn, are continuing to explore their own world with their big brother away on a mission to Mars. 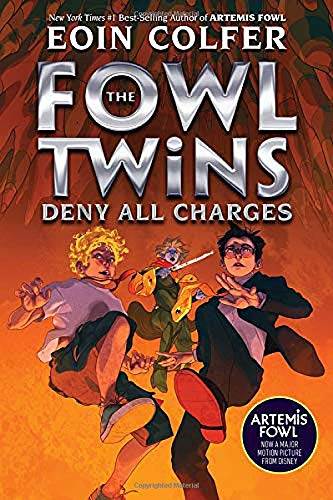 Though they are under surveillance by the LEPrecon force, Myles and Beckett have built a relationship with LEP officer Lazuli Heitz and continued their pursuit of the shadowy group ACRONYM, which they encountered in The Fowl Twins. Everything seems to be going Myles and Beckett’s way, but crashing the family jet in Florida has pushed their parents too far. Angeline and Artemis Fowl Sr., who have endured multiple life and death moments with their elder son Artemis look to curtail Myles and Beckett’s reckless behavior. The two boys have been put on strict supervision and the parents have also contacted Holly Short to sever ties with the fairy world.

What looks like the end of the adventure is just the beginning as dwarves plot against Myles, Beckett, and Lazuli. Gveld Horteknut, leader of a renegade group of dwarfs seeking to reclaim their lost gold fortune from the ACROYNM group, has been foiled at every turn by the Fowl twins. Gveld wants the Fowls dead and will stop at nothing to achieve her goals. Just as the Fowl parents have reined in their children, the family once again must rely on Myles’ brain, Beckett’s strength, and Lazuli’s hidden talents to save the day.

The joy of an Eoin Colfer book is the humor that the author sprinkles throughout the story. From first word to last, the reader will laugh as the characters make their way through fantastical events. That is what makes Colfer such a talented writer, his humor is supreme and continues to radiate each line of text with several layers of laughter in The Fowl Twins: Deny All Charges.

Beyond the multiple references to farting and childish antics, it’s Colfer’s gift with language and for creating such likable characters that makes this reader chuckle from page to page. Though there are many funny parts in the book, there is more to The Fowl Twins: Deny All Charges then just fart jokes. Though I must say, flatulence is always funny.

Longtime readers will get to see more of Angeline and Artemis Fowl Sr., as parents. The mother and father have often worried about the fate of their eldest son in the past, and now they want to protect Myles and Beckett as best as they can. We see a reformed super criminal in the dad, who still dreams of the old days, but we meet parents that are committed to the safety of their children. No matter how much money you have, or if you are a rehabilitated criminal mastermind, everyone worries about their kids and wants them to be safe.

Lazuli Heitz is a unique character because we see a fairy who is different from every fairy we have met in past books. Though she may admire the great Holly Short and interact with the genius Foaly, Lazuli knows that she sits outside of the norm in her world. As a pixie-elf, Lazuli is a small minority amongst a large majority. After discovering her magical abilities in the previous book which resemble goblin powers, Lazuli is learning to accept herself and the magical abilities that she possesses.

Gveld Horteknut is your standard bad guy for the middle grade story. Her hatred of Myles and her willingness to kill humans is devilish. She has many great moments of dialogue with Myles, but Gveld is forgettable because we know there is a greater villain looking for payback on Myles and Beckett.

The Fowl Twins: Deny All Charges is a four-star book because it continues the hilarity of an established literary world while putting fresh faces for the readers to connect with in the form of Myles and Beckett Fowl. Artemis Fowl has gone to space and now it’s time for Myles and Beckett to shine. Eoin Colfer has proven that you can capture lightning in a bottle twice with this supremely hilarious and joyful read.