Disney+ celebrated the success of the original film Clouds with a special live event on facebook called Clouds: A Musical Celebration. The event included stars Sabrina Carpenter and Fin Argus plus special guests like OneRepublic, Jason Mraz, and renforshort. You can see the full event below and here’s a recap of the 30-minute web special.

The event kicked off with DCapella performing an acapella cover of “Clouds” from their homes and yards. It was a lively way to start the show with a split screen performance that also came full circle by the end of the special.

Several introductions from cast and crew were included, starting with Director Justin Baldoni thanking Disney for helping to get Zach Sobiech’s story out there in such a big way. Neve Campbell and Madison Iseman also provided introductions during the event. At the very end, Justin Baldoni also shared an Instagram post where he broke down crying when Zach’s recording of “Clouds” went to number 1 again on the iTunes chart.

Fin Argus and Sabrina Carpenter were joined by the real Sammy Brown, who Carpenter played in the film. As a trio, they performed “Fix Me Up” with Fin on the guitar. Sammy Brown returned later to sing one of the songs she wrote with Zach that wasn’t included in the film called “Coffee Cup,” which can be heard on their album, which is also called “Fix Me Up.”

renforshort performed her song “afterthoughts” in what looked like a full music video. She sang the song while playing acoustic guitar while a camera panned left to right, putting her in a digital field with cloudy skies above.

Fin Argus shared a story about how he co-wrote the song “My Little Dancer” with Zach Sobiech using unfinished lyrics and journal entries about his girlfriend Amy. As Fin played and sang the song, a ballet dancer performed to the beautiful song.

OneRepublic performed their end credit song “Wild Life” from their individual homes. It was an uplifting moment before the big finale.

Jason Mraz talked about his involvement with Zach and the song “Clouds” before singing the song with some very special guests. Not only did cast members from the film and DCapella join in, but members of Zach’s family including his parents, sisters, and nephews. At the end, Fin Argus reminded viewers that if they’re inspired by Clouds, they can help by supporting the Zach Sobiech Osteosarcoma Fund. 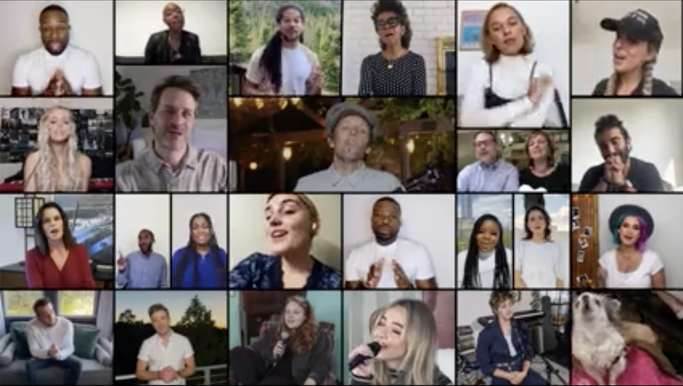