Book Review: “Holiday Magic at the Disney Parks: Celebrations Around the World from Fall to Winter” 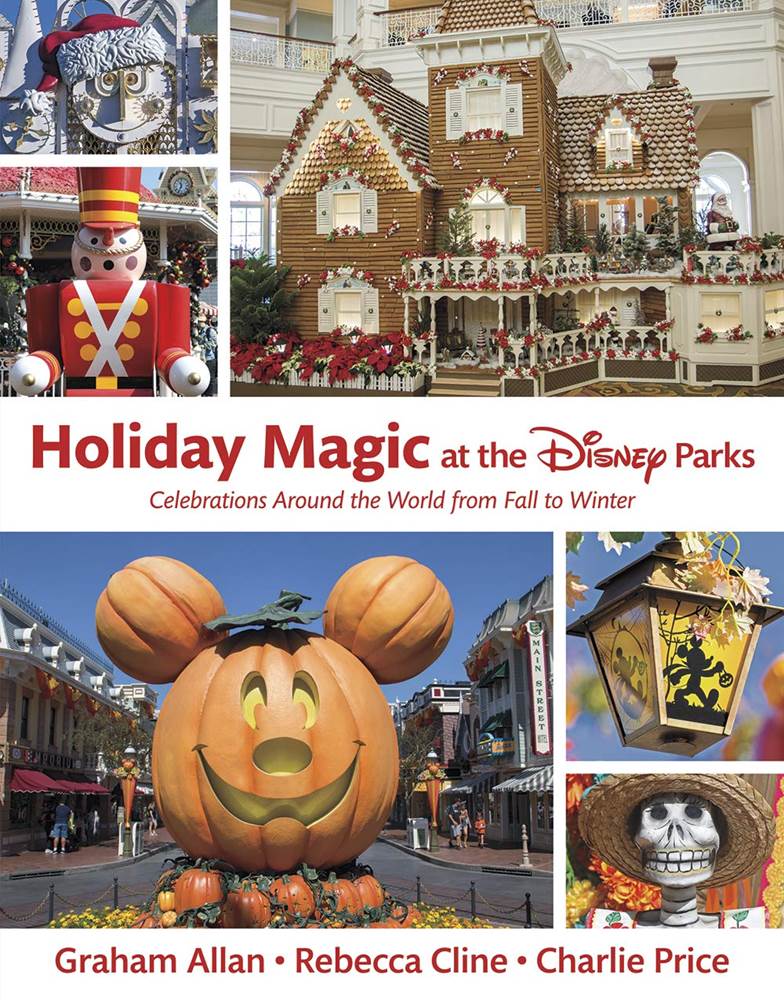 Tim Burton’s The Nightmare Before Christmas begins with a prologue that says “You've probably wondered where holidays come from. If you haven't, I'd say it's time you begun.” Going back to the original foundations of the holidays isn’t part of the scope of Holiday Magic at the Disney Parks: Celebrations Around the World from Fall to Winter, but tracing their origins within the Disney Parks is. That’s why this new coffee table book by Graham Allan, Rebecca Cline and Charlie Price will be such a welcome addition to your Disney history book collection.

If you’re the type of person who gets upset by stores that start selling Christmas decor well before Halloween’s season officially begins, you may look at the cover and think it’s too much too soon. But the first third of the book is all about the fall traditions at Disney destinations around the world. There’s even an Easter Egg of sorts at the back of the book, a fun “How to Install” for Disneyland’s giant Town Square pumpkin. Compared to Christmas, modern Halloween traditions are still relatively new and it’s fascinating to read about how Disney gradually adopted the holiday, really expanding it in the 80’s, 90’s and today. The book also covers a lot of fall traditions at Disneyland that have fallen out of vogue over time, including Dixieland at Disneyland.

The fall and winter holidays are bridged in a way by a chapter called “When Holidays Collide” that’s all about Haunted Mansion Holiday at Disneyland, it’s Tokyo Disneyland counterpart (The Haunted Mansion: Holiday Nightmare), and what other Mansion-style attractions at international parks do around the holidays including Phantom Manor at Disneyland Paris and Mystic Manor at Hong Kong Disneyland.

The other 2/3rds of the book is a salute to all winter holidays, but mostly Christmas. It starts with a Disney Parks history lesson about how the parks began their Christmas traditions, with the famous Candlelight Processional taking up an entire chapter all on its own. Every incarnation of a holiday parade, holiday party, and even the evolution of each park’s Christmas tree are well documented through many, many photos.

The introduction proudly boasts that the book contains nearly 1,900 images, many of which were photographed just for this book and much of the archival images make their publication debut here. One of my favorite Walt Disney World traditions is visiting as many of the resorts as I can to see their themed decor. This book fulfills that need for me this year with an entire chapter devoted to how the individual Disney resorts decorate for the holidays, including international destinations and standalones like Aulani, Hilton Head, and Vero Beach.

Holiday Magic at the Disney Parks: Celebrations Around the World from Fall to Winter is a perfect way to bring the holiday magic of a Disney park into your home. It’s full of fun facts about the history of holiday traditions at Disney Parks and how the incredible Cast Members decorate them overnight. Best of all, it fulfills a nearly impossible effort of visiting all of the Disney Parks and resorts around the world to explore how they celebrate fall and winter traditions.