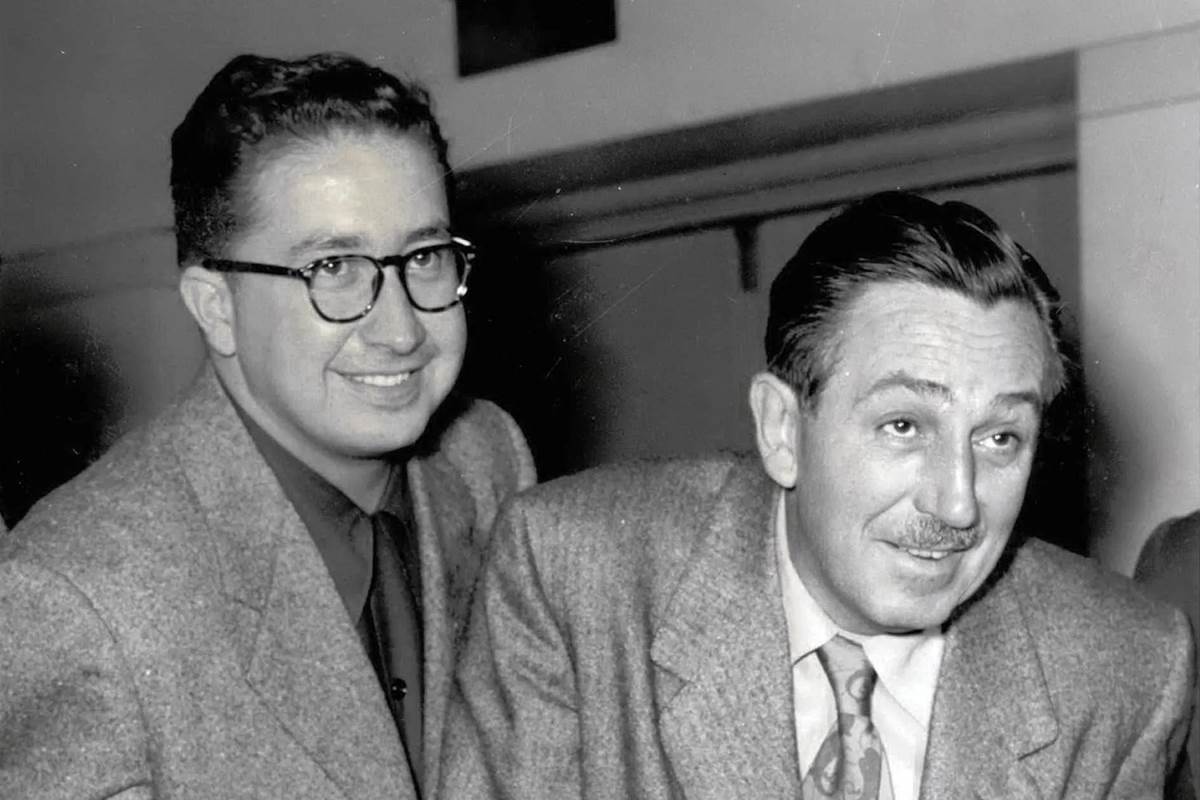 On October 24th, the Walt Disney Family Museum hosted a very special virtual program celebrating the life and career of Disney Legend X Atencio called “Pillaging Pirates and Grim Grinning Ghosts.” One of X’s daughters, Tori Atencio McCullough, and granddaughter, Kelsey McCullough, took attendees through a presentation about his life and career before answering questions from attendees. Attendance for this virtual event cost $5 and fans interested in participating in future events can see them all here.

Referred to by both hosts as “Papa X,” Xavier Atencio was born in 1919 in Trinidad, CO, and was the son of a Spanish language newspaper editor. Dreaming of following in his father’s footsteps, X’s pivot to art was a decision made for him when he didn’t get into the journalism programs he applied to. In 1937, he moved to Los Angeles to study art at Chouinard thinking he would be a newspaper illustrator.

When Snow White and the Seven Dwarfs became a phenomenon, Disney wanted to expand rapidly and Chouinard asked their students to submit a portfolio to Disney as an assignment. With just one semester of art school under his belt, X had no realistic expectations but storyboarded a segment called “Colorado Cowboy” about a horseshoe throwing competition and soon found himself with a job offer, running three miles home in Burbank shouting “I got a job at Disney!”

With his education cut short, X worked full time under Woolie Reitherman as an assistant animator with no screen credit on films like Pinocchio (Monstro segment) and Fantasia (“The Right of Spring”). During this time, he began making custom Christmas cards to send to his family that prominently featured Mickey Mouse. But like his education, his animation career was to be cut short by World War II with X drafted into service in 1941. During the war, X ended up in England where his artistic experience paid off in the Photo Intelligence Unit where he would study overhead photos to spot German plains to tell the bombers where to target. His Disney experience made him a local celebrity in the army and he continued making Disney Christmas cards while abroad.

After the war, X returned to Disney where his job was waiting for him, but he was dissatisfied watching other assistant animators get promoted while he returned at the same level. Tori and Kelsey shared that X rarely talked about these seven years where he animated without screen credit and did character designs on films like Cinderella, Peter Pan, and Winnie the Pooh. Stop motion animation is where X really felt like he made his mark at Disney on shorts like Noah’s Ark and A Symposium on Popular Songs, as well as segments for The Mickey Mouse Club. X designed the characters while Bill Justice did the animation on projects like Ward Kimball’s Toot, Whistle, Plunk and Boom. These projects earned X his first screen credits at Disney.

Doing stop motion work got X some on-screen time on The Wonderful World of Disney, which brought him face-to-face with the big boss, Walt Disney. Stop motion also allowed him to jump to live-action filmmaking on the opening sequence of The Parent Trap and Babes in Toyland, for which he designed the tin soldiers that march annually in Disney Parks Christmas parades. Those same toy soldiers were also featured in the “Spoonful of Sugar” sequence of Mary Poppins, which also features stop motion animation.

Outside of the studio, X had four kids in five years and designed and built his own house in Woodland Hills. He had his own studio at home that could only be accessed from outside to have uninterrupted work time. Disney didn’t pay well, so X took side jobs for other companies and also did extra work for Disney, designing records and book covers. His Christmas card traditions also carried on from his home studio, although he grew to resent making them, often including complaints about the challenge to make each one unique and different within the cards themselves.

X’s biggest contributions to Disney history and pop culture came when Walt Disney personally asked him to join WED, the division that created theme park experiences at Disneyland. His life came full circle with his new job as an attraction writer, going back to his earliest interest in studying journalism. His first assignment was Pirates of the Caribbean, for which he assumed the Sherman Brothers would write a song. During his writing process, he came up with a temporary melody and lyrics and when Walt Disney heard it, he gave his usual “That’ll work” and paired him with George Bruns to flesh it out, which is how X became a songwriter.

His next big project was an extinct attraction, but one important to the history of Disney Parks, Adventure Thru Inner Space. It was the first omnimover attraction, which brought with it new storytelling challenges that helped him on his next assignment, The Haunted Mansion. Having inherited all of the development work that had been done before for the empty Disneyland mansion, X had to solve the debate regarding whether the experience would be scary or funny, doing it with a new song. He used his own voice in his attractions, but working with Paul Frees on Adventure Thru Inner Space also got Frees a job as the Ghost Host.

X Atencio also made contributions to EPCOT, refining the design of Figment and overseeing all of the narrations in the park. This included taking author Ray Bradbury’s treatment for Spaceship Earth and putting a Disney spin on it.

Tori and Kelsey shared some personal memories of their Disney Legend relative during the presentation, each of them carrying on the Disney tradition in their unique ways. Tori was the Director of Interior Design at Walt Disney Imagineering, working on interiors of shops and restaurants at World Showcase, spending four years in Paris on Disneyland Paris, and most recently designing hotels for Shanghai Disneyland before retiring. Tori works in the digital space on things like the Play Disney Parks app and most recently on the Star Wars Datapad for Star Wars: Galaxy’s Edge.

For Tori, a day in the park with her father usually meant parking backstage, riding Pirates of the Caribbean, and having lunch at Aunt Jemima's Pancake House in Frontierland, which became River Belle Terrace in 1971. Visiting the park as a teenager with friends gave Tori her first real Guest experience, parking and entering the turnstiles and entering Main Street U.S.A. by walking under the train station. Tori also believes that she and her siblings helped influence the breathing doors in The Haunted Mansion when they made their father watch The Haunting while he was working on the experience.

X Atencio was a big fan of the Pirates of the Caribbean films and was excited to be invited to the set of Dead Man’s Chest to meet Johnny Depp. Kelsey and Tori negotiated their way into joining X and while they had to wait a bit for Depp to appear, it was worth it because he shows up fully done up as Jack sparrow. X brought along a DVD copy of The Curse of the Black Pearl for Depp to sign, but was touched when the actor pulled out a copy of “Yo Ho (A Pirate’s Life for Me” lyrics and asked X to autograph it for him.

Tori shared that the only time she ever saw her father cry was the day Walt Disney passed away. Walt Disney was not known for giving compliments, but Tori recalled a story where X had traveled with Walt and gave a presentation that went over particularly well. Getting back on the plane, Walt Disney turned to X and said “Don’t let it go to your head,” meaning he had done a great job.

All of X’s family members pay homage to their Disney Legend relative everytime they visit Disneyland by stopping in front of The Mad Hatter shop where his window on Main Street is prominently displayed. His credit is for “Lyrics and librettos.”