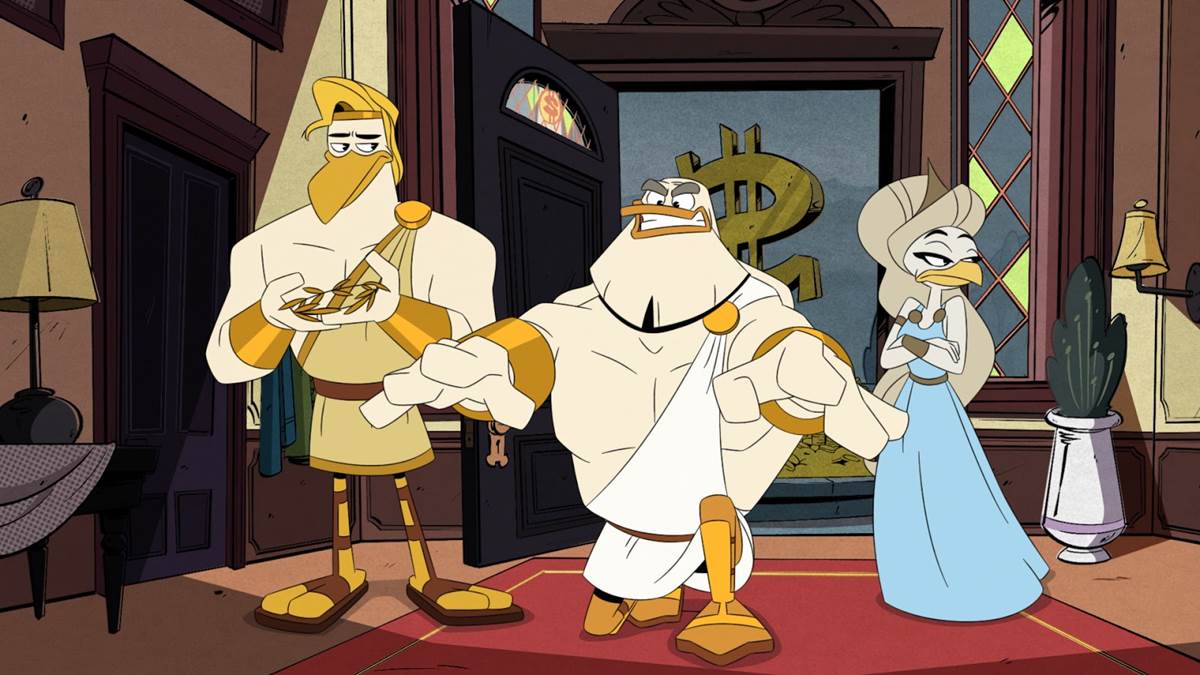 The Greek gods are back in Duckburg in this week’s new episode of the Disney XD DuckTales reboot. It seems Zeus (voiced by guest star Michael Chiklis of The Shield and two Fantastic Four films) has been stipped of his powers due to having been deemed unworthy, and his children Selene (Nia Vardalos from My Big Fat Greek Wedding, appropriately) and Storkules (Chris Diamantopolous of Disney Channel’s Mickey Mouse cartoons) are seeking mortals to claim his powers.

Their first choice is Della (Paget Brewster), naturally, but she wants the honor to go to one or all of the kids living in McDuck manor, because they’re feeling dejected after a failed mission with Uncle Scrooge (David Tennant) to claim the Helmet of Hengis Khan. Scrooge has started putting together a new, “better” adventuring team and the kids are eager to prove themselves. Meanwhile, Donald (Tony Anselmo) is prepping for his big second date with Daisy (Tress MacNeille) by sinking his garbage to the bottom of the swimming pool, only to be interrupted by Storkules, his well-established number-one fan. 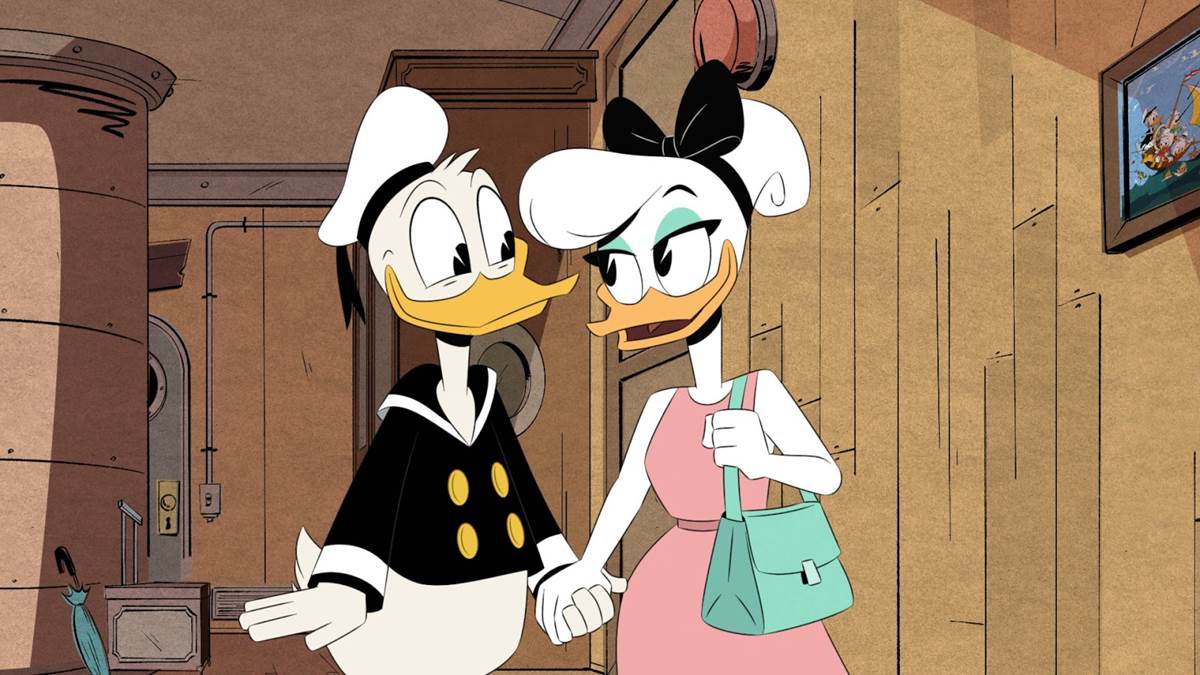 Storkules makes himself a third wheel throughout the date, constantly butting in and making things extremely awkward between Daisy and Donald. Back in the mansion, the visiting Ithaquackians put the kids through a series of trails to see how they would handle having god-like abilities. Louie (Bobby Moynihan) gives himself the Midas touch but overdoes it in a local park, forcing his efforts to be reversed. Huey (Danny Pudi) goes with a Twilight Zone-inspired ability to see the future of individuals along the Duckburg streets, but that follows a similarly tragic path. Thirdly, Webby (Kate Micucci) wants to enact “sunny friendship times” on the local boardwalk, but it ends with her going mad with lightning bolts when people won’t get along. Then Dewey (Ben Schwartz) wows his audience with a Flashdance performance, but forgets to include any god powers whatsoever in his presentation. Frustrated with himself after ruining Donald and Daisy’s date, Storkules misguidedly summons a Titan from the underworld at the behest of his vengeful father, and the various characters must come together in order to defeat it. The nephews and Webby regain their god powers and use them in tandem, while Daisy simply stares down the giant monster, and Della makes sure Scrooge encourages his family and makes them feel wanted as a whole. It’s altogether a very fun, extremely funny, and pretty exciting episode with some terrific guest appearances. The tortured relationship between Donald and Storkules is always a goldmine of laughs, and I am continually impressed at how much the animation has improved in this season of the show. It was also interesting to see how Scrooge responds to failure, even though the half-hour of course ends with his renewed determination at retrieving the crown and continuing the Duck family’s pursuit of Isabella Finch’s missing mysteries. 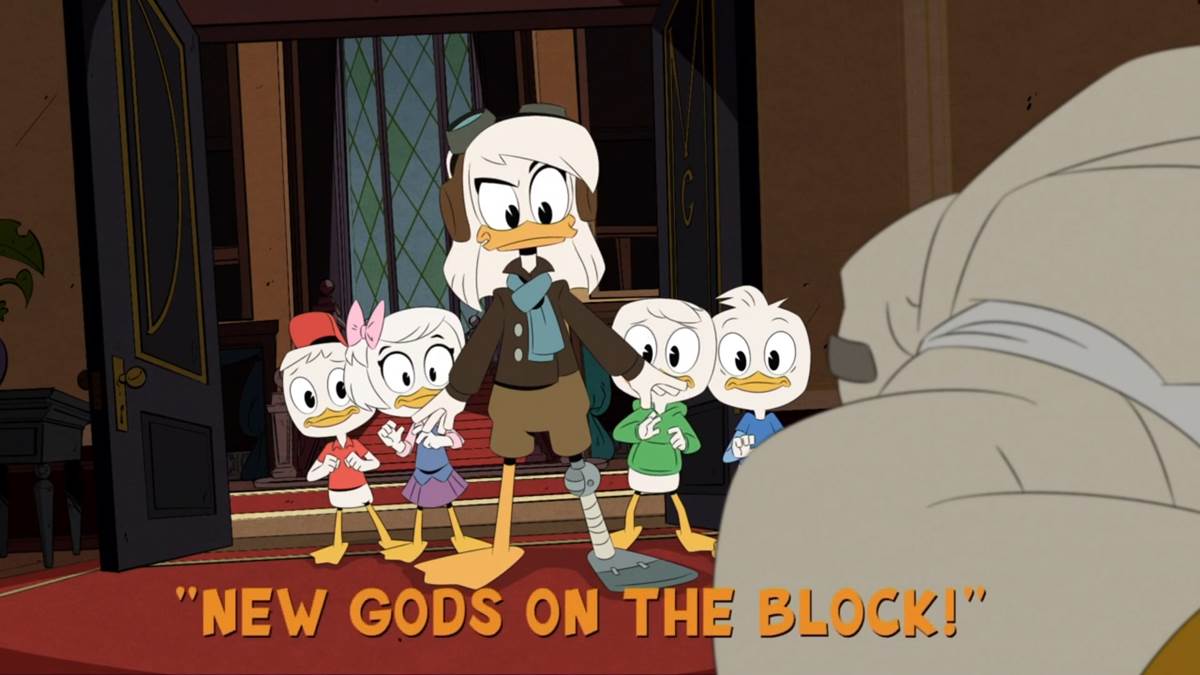 Next week: “The First Adventure!”