If you’re a fan of Beauty and the Beast, then you know that Robby Benson was an unlikely casting choice to voice Beast in the early 1990’s. But I bet you don’t know a lot about him beyond that film, including his musical interests and role as a director on sitcoms that include Friends and Ellen. The entertainment icon recently joined the Walt Disney Family Museum for their Happily Ever After Hours virtual event. Here are 10 things we learned from Robby Benson. 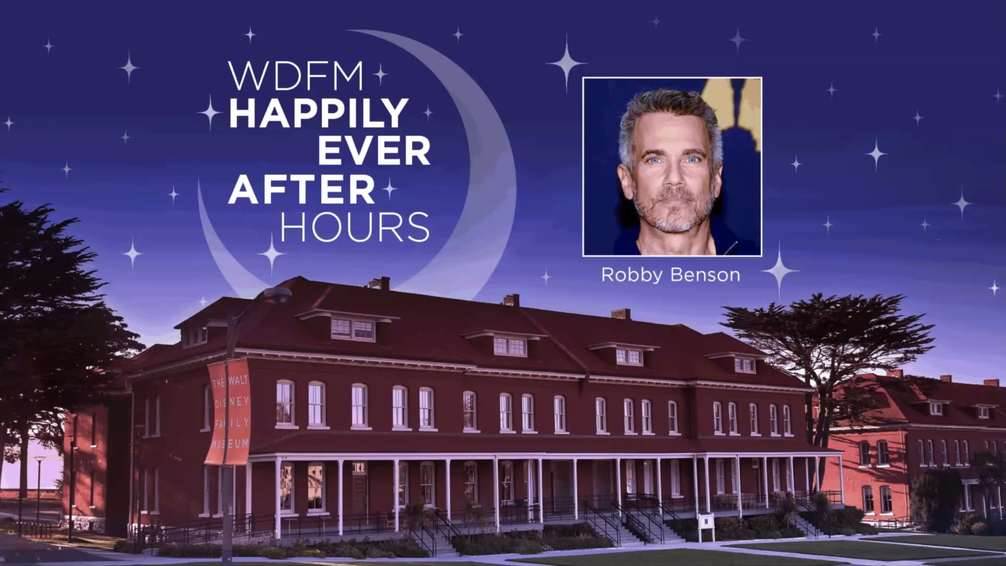 1. His parents inspired him to become an actor.

“I was pretty young when the bug hit me,” Robby Benson shared. His mom performed in theater at their home in Michigan and his first stage role was in The King & I. When he heard that the next show was going to be Oliver!, he told his parents he wanted to play the title role. Knowing how hard it would be to get, they prepared him for the reality of the situation. He quickly memorized the script and music and worked hard, getting the part.

2. He was acting on Broadway before he was a teenager.

Acting wasn’t just a side hobby for the young actor, who found himself acting on Broadway with Ed Bagley in Zelda when he was just twelve-years-old. “Being around theater and theater people was probably the best education I could ever get for show business,” he shared, recounting his luck for growing up in the theater rather than a soundstage. As he put it, if you’re acting in TV and film, you don’t get the same level of audience response.

3. Robby skipped three grades thanks to his excellent math skills.

When he was a kid, Robby Benson had remarkable math skills. He would take home school workbooks that were meant to last the whole school year and complete them in a night for fun. Recognizing his outstanding abilities, he was bumped from 2nd to 5th grade.

4. He’s had four open heart surgeries, the first in his twenties.

Benson has always been a fit runner, so he was shocked when a doctor checkup required by his insurance led to the discovery of a heart issue that needed immediate surgery. “I was a young man, I was in my mid-twenties, I had just been married, Karla and I had had a little girl, she was just over one and my agent and the business thought of me as a very vital boy next door, young man next door, athletic. Most of the things I did had some sort of athletics involved. And suddenly I needed open heart surgery and so my first instinct was we can’t tell anyone and I think that’s a big mistake. And it did backfire on us because the night before the surgery, must’ve been a very slow news night in LA, I was the number two story in the news. And of course, back then, there were only three channels that you watched and there wasn’t social media, so it was a much different kind of pressure. But I had told the people at UCLA, I even had a different name.” The nurse knocked on his door and announced that NBC was at the hospital asking for a statement. Just eight weeks after his first surgery, he ran a 10K. He’s had three subsequent surgeries on his heart and is doing fine.

5. He was teaching when he got the audition for Beauty and the Beast.

“I was teaching on the east coast,” Benson shared when asked about how he found out about the audition for Beauty and the Beast. His students helped him make a film called Modern Love that he also acted in along with his wife, Karla DeVito, and Burt Reynolds and Rue McClanahan. As the project wrapped and his teaching gig ended, his agent called and let him know that Disney was having a hard time casting the male lead in an animated feature.

6. Robby watched other famous actors blow their audition for Beast.

Robby recalled the audition itself. “I sat there and I was reading the lines and I could hear in the room where all of these other actors, some very famous actors, were going in there and they were blowing out their voice doing the part of the Beast.” Benson’s theater work came in handy, knowing how to get loud without destroying his vocal chords, but while he studied the pages, he realized there was “Something There” that other actors weren’t picking up on. “And the more that I read these words, the more they came to life for me.” Benson had also worked in music production before and knew something the other actors didn’t when his turn was up. “I walked into the room when it was my turn and there were two men sitting at a desk and in between them was an old fashioned Sony Walkman.” He realized that all the actors who yelled into the mic would sound muffled on the tape due to the condenser. “I got in there and I knew that the more I could give resonance and body to the sound and true feeling to the words and make it come to life, not like it’s a cartoon, the more it would be meaningful, at least to me. I had no idea what they were really looking for…. And low and behold, a week later I got a callback.” Robby had a total of six auditions before the part was officially his, including a trip to Disney’s recording studio where he geeked out with the sound engineers.

7. Beast didn’t have a song when he was cast.

As hard as it might be to believe now, Beast wasn’t originally going to sing. That all changed once Robby Benson was cast, who could not only sing, but sing really well. The song “Something There” was written as a duet for Beast and Belle as a result.

8. He recorded one session with Paige O’Hara.

Voice actors typically record their lines separately for animated features and rarely get to meet while making the film. “We almost never saw each other except Paige did something very smart,” he revealed. “For the scenes that were very intimate, she said why don’t we try working together, Robby and myself?” The filmmakers listened and gave the pair a recording session together.

9. Like Angela Lansbury, he recorded his singing part in one take.

Angela Lansbury famously recorded “Beauty and the Beast” in just one take and Robby Benson got to be on the sidelines to watch it happen. “That’s how you do it when you make a Broadway album. She did the song in one take, I’m getting goosebumps now,” Benson shared as he recalled the moment. Being a Broadway veteran himself, he was surprised that his singing moment also required just one take.“When I did the song ‘Something There,’ they recorded my level and I did one take.” He expected to do more, but being at the music recording sessions was also a rare treat to meet the other cast members. “Every performer in this film is magnificent in everything that they did. I’m just so proud to be a part of their work and also, honestly, I mean Glen Keane who drew the Beast, he brought the Beast to life. I was lucky enough to give him a voice, but the real DNA is the artists and Linda Woolverton, the writer. So you have all of these incredibly gifted people working together.”

10. Robby Benson is currently making music with his wife during quarantine.

Robby isn’t the only great singer in his household. His wife, Karla DeVito, is the duet partner on Meatloaf’s classic song “Paradise by the Dashboard Lights. Benson met his wife on Broadway where they played Mabel and Frederic in The Pirates of Penzance. It only took him two weeks to realise he’d met the one he wanted to marry and while in quarantine, they’ve been making music on YouTube. Their next release will be a kids song called “My Doogie’s Frogs.”