The second season of Marvel’s Storyboards, the  web series available on the Marvel Entertainment YouTube channel, kicked off today with actor and documentary filmmaker Gillian Jacobs as the guest. 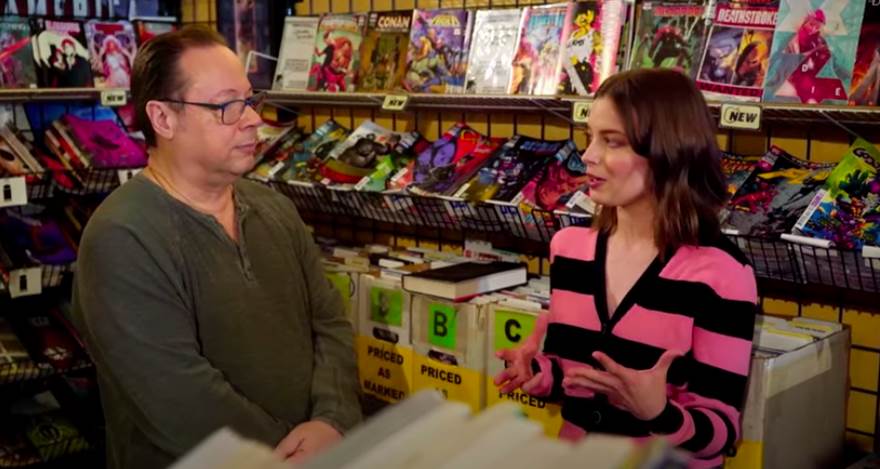 Marvel executive VP, creative director Joe Quesada introduces the episode be explaining that he is meeting with Jacobs in Los Angeles because, on top of her acting, she also tells stories about unsung Marvel heroes. Jacobs is the director of one episode of the upcoming docuseries Marvel’s 616, coming to Disney+.

Jacobs tells a story of her reaction to being cast as Britta in the hit television series Community, a role for which she is probably most well known. Quesada asks Jacobs about potentially moving from acting into directing, an idea to which she seems to be open.

They then tease Jacobs’ episode of Marvel’s 616 a bit, but before getting into it, they move the conversation from a book store to a comic shop. Jacobs’ episode is titled “Higher, Further, Faster” and it tells the story of some of the most amazing women throughout the history of Marvel. In this episode of Marvel’s Storyboards, Jacobs mentions that “Higher, Further, Faster” looks into the careers of women like Marie Severin and Flo Steinberg and eventually making its way up to present day creators like G. Willow Wilson and Sana Amanat.

Jacobs mentions Squirrel Girl as her personal favorite character before getting a bit more into the career of Severin, who Quesada refers to as one of Marvel’s unsung heroes. Quesada picks up an Ann Nocenti comic, another creator featured in Jacobs’ episode.

Quesada asks Jacobs for her origin story. She explains that she was an only child without many friends so she was always an introvert living in her imagination. She goes on to explain that she found her acting class, which she referred to as Xavier’s school.

After the comic shop, Quesada and Jacobs head over to Pink’s Hotdogs to finish up their chat. There, Quesada asks Jacobs about her “third act moment.” She explains that she was considering giving up on acting before she got the role in Community, but she decided to stick it out. She jokingly compares herself to Wolverine, as a “solitary superhero.”

Finally, Quesada asks Jacobs where she wants to go with directing. She explains that she wants to eventually direct a movie and “spend as much time behind the camera as in front of it.”