Two new shorts from The Wonderful World of Mickey Mouse just landed on Disney+. In this recap, we’ll not only look at some of the fun in-joke references for Disney fans, but also some of the cool animation tricks employed at Disney Television Animation. Here we go!

A Pluto-centric episode? Yes, please! It’s the 13th day of whatever month this is, which means it’s time for Pluto to take his flea preventative treat. At face value, the joke here is that 13 is often considered an unlucky number, but there’s an extra layer. “M” is the 13th letter of the alphabet and Disneyland’s street address is 1313 Disneyland Drive, the double 13 representing the initials M.M. for Mickey Mouse. 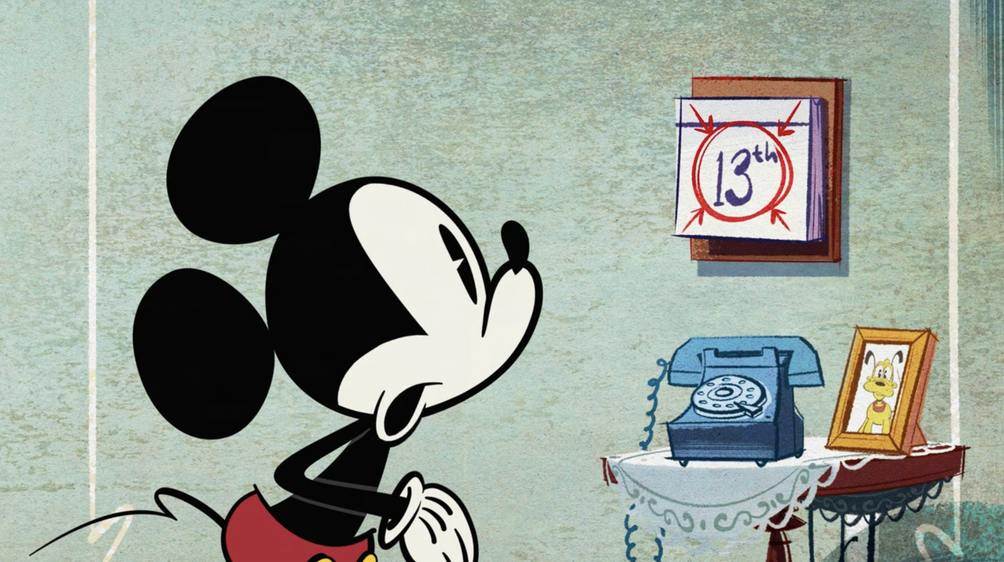 Mickey is reminded why he circled this date when a flea bites his knee. His response is to eject his leg off his body and quickly regrows another. Only the best for Mickey’s pal Pluto with “Flea Gone,” which uses Walt Disney Script font for it’s packaging. It boasts a “New Flavor,” let’s see if Pluto likes it! No he doesn't. Pluto’s entrance music is the theme music from his old Walt-era animated shorts. Mickey tries to trick Pluto into eating the medicinal treat, including karaoke and offering him a pancake buffet. Among the art in Mickey’s house is a framed portrait of the Steamboat Willie Riverboat from Mickey’s first short released to theaters. 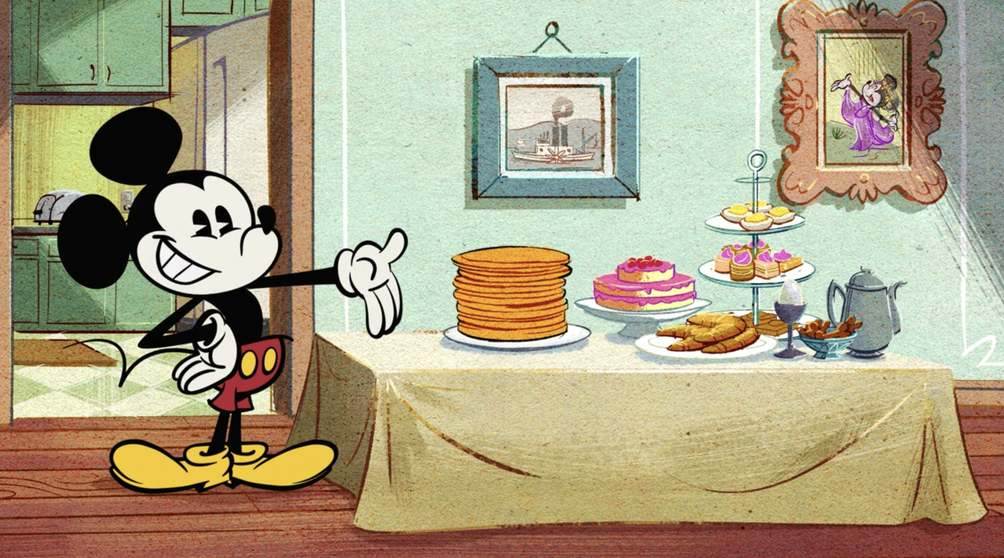 While tempting Pluto, the table starts to spin, becoming a computer generated effect. Okay, technically the entire show is animated in a computer, but what I’m talking about is a three-dimensional computer generated object in a two-dimensional world, like some of the hybrid sequences employed during the Disney Animation renaissance. After wolfing everything down, Pluto coughs the Flea Gone back up and gets mad at Mickey. “Egads! How did that get in there? Those pancake people!” With Pluto losing Mickey’s trust, Mickey witnesses the flea that bit him earlier calling all his pals to come have a feast. His friends, by the way, are currently living on Goofy’s butt. He answers the phone and then holds it to his rear for the fleas to talk. Looks like Goofy could use some Flea Gone! This is a beautifully composed shot with Minnie Mouse and her dog Fifi on the wall because the next thing Mickey does is give her a call. At Minnie’s apartment. Mickey sees her feed Fifi her Flea Gone disguised inside a flower-shaped treat like the one on her pillbox hat. Then Pluto whispers something into Fifi’s ear and she ejects the Flea Gone, getting mad at Minnie, too! My favorite gag of this short is when Fifi holds the treat in her paw, which turns into an angry fist and she crushes it. Returning home defeated, the original flea uses a bugle horn to call all his friends. The sky in these shots appears to be live action time lapse footage of storm clouds, which makes for a great effect.

With the fleas attacking Pluto, a medieval tower appears out of nowhere, which Mickey climbs to fight off some of the fleas. When the chomping bugs assemble into an oven, Mickey throws the treat into Pluto’s mouth, which bounces around like a basketball in a hoop for suspense before going in. Almost immediately, a huge explosion decemates all the fleas and leaves Pluto in a crater. So that’s how Flea Gone works! Mickey and Pluto celebrate with a stack of pancakes and a strictly platonic kiss. While Mickey and Pluto’s flea troubles are over for now, the short ends on a cliffhanger for Minnie and Fifi with the fleas assembling to form some kind of Ralph Breaks the Internet monster. I hope Minnie and Fifi are okay! The next short centers around another one of Mickey’s pets, his fish Gubbles (I sure hope his bird, Tuppence, is doing well!). Mickey brings Gubbles to a pier on a lake in the middle of Central Park, where a fish school bus rises out of the water to bring his fish to his first day of school. When Mickey sees other parents and kids playing in the park, he has a flashback to his own first day of school. We get to see bucktoothed Mickey meeting Minnie, Donald and Goofy and being bullied for the first time by Pete, who had his peg leg even at a young age. Pete throws his banana peel, which causes Mickey to slip down the hallway in and out of classrooms. He’s attached to a skeleton when he comes out of the first one, which is a cameo from the Silly Symphony short, The Skeleton Dance. The last stop of his banana slip is breaking through a fence outside, which releases Butch the bulldog, who chases after Mickey. He barked at Mickey earlier in the short and if he looks familiar, you may remember him as Pluto’s old nemesis in the classic shorts, including Pluto’s Purchase. Feeling he must protect Gubbles from having a bad first day, Mickey uses his fishbowl as a helmet and belly flops into the lake. But before he gets there, we get a quick shot of Gubbles’ teacher, which is none other than Merlin the wizard from The Sword in the Stone as a fish from the “That’s What Makes the World Go Round” musical number. 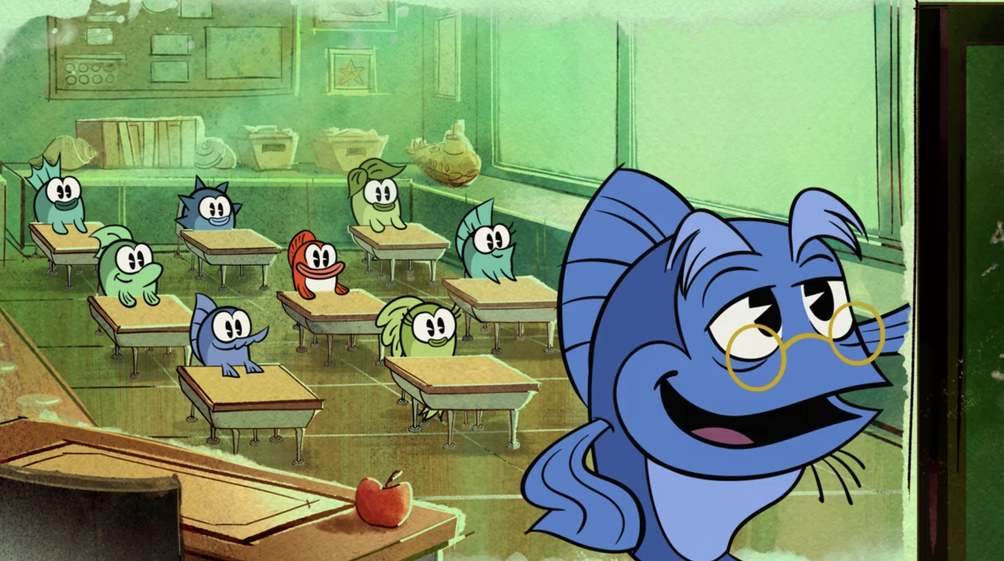 Gubbles wasn’t having problems before Mickey arrived, but now they all think he’s a wuss with his overprotective father following him everywhere and interrupting their class. 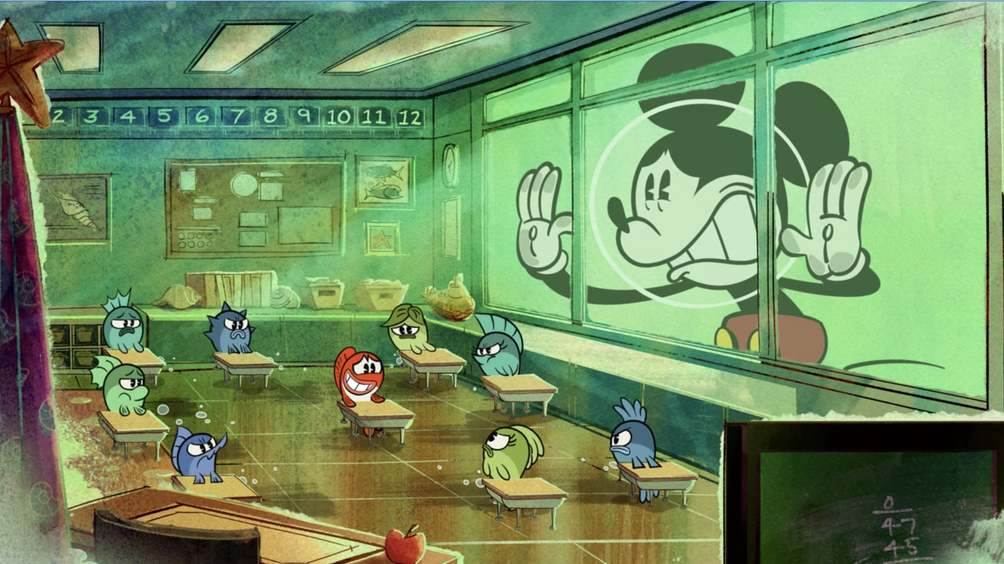 At the playground, Mickey puts Gubbles in a helmet and sets a pillow under him on the swings, gently nudging instead of pushing while the other fish laugh. Disguised as the lunch person, Mickey even disturbs Gubbles’ lunch with a secret message in his alphabet soup. Is Mickey’s “Gubble wubbles ready for some fishy num nums?” Absolutely not. My favorite gag in the short is the hairnet Mickey wears on the outside of his fishbowl helmet. The Walt Script font returns in this short on Gubbles’ bib while Mickey feeds him. “Here comes the submarine!” Gubbles gets mad (and jacked) and runs away. When Mickey follows him, he slips on an underwater banana peel and lets loose a bull shark (in fresh water) that bears a striking resemblance to Butch. Gubbles comes to the rescue, showing what a tough guppy he is and scaring away the shark, becoming a hero for the entire school and proving to Mickey that he doesn’t need him to follow him to school anymore. I hope you’ve enjoyed this recap of the third and fourth shorts of The Wonderful World of Mickey Mouse. Both shorts are now streaming on Disney+ and I’ll be back next week to dissect the next two episodes.