On December 4th, the world of fairy godmothers and modern-day Boston collide in Disney’s Godmothered, a Disney+ original film. Ahead of the film’s release, some of the stars of the film got together for a virtual reunion to share some of the behind-the-scenes magic behind the holiday family comedy. From cupcake dresses to working with pigs, nothing was left out in this conversation about Godmothered from director Sharon Maguire.

“I was such a fan of Bridget Jones and I’m so excited to get to work with her,” exclaimed Jillian Bell, who stars in the film as Elanor, a fairy godmother in training who travels to Boston to try and save her world. “One of the first things she did, which I loved, was get Isla [Fisher] and I together… we just started improvising and playing around and that kind of set the tone for Isla and I to really just like be playful with each other and go in knowing each other.” Comedy legend Jane Curtin, who plays Eleanor’s teacher and school headmistress, was also new to working with the acclaimed director of Bridget Jones’ Diary and Bridget Jones’ Baby. “I had never worked with Sharon before,” Jane Curtin shared. “And I had a lovely time working with her. She’s very exact and she does like to do many takes,, but she gets interesting things out of people. I thought it was fun working with Sharon, I enjoyed it.”

Like Giselle in Enchanted, Eleanor instantly looks like a fish-out-of-water in Boston in her giant pink cupcake dress. Costume Designer Renee Ehrlich Kalfus worked closely with Jillian Bell to create a dress that not only looked like it was from a fairy tale, but that she could wear for almost the entire film. “She made sure that I was warm when we were shooting very cold scenes and she made sure that I can move around a lot, because it was very physical. Our director, Sharon Maguire, was there, and the head of costumes, and we all kind of came together and it started with a corset. I actually went to David’s Bridal and I tried on all different types of wedding dresses and they were all huge ball gowns. And I remember seeing other women there that were trying on dresses to be married. And they were looking at me and I was in the poofiest thing falling out of the dressing room and they were all like ‘Congratulations,’ but looking  at me like I was… That’s how we kind of found the framing for the corset and the ball gown look. It went through many different versions, but we all kind of got there together and I’m so pleased when I saw the final product.” Outside of a scene in pajamas, Jillian Bell is in that pink puffy dress the entire film. Another actress with one main costume throughout the film is Jane Curtin, who also wears an extreme wig as Moira. “It was the only tall character I’ve ever  played,” the Coneheads actress joked. “It was a momentous thing for me to actually tower over other people. The makeup and the hair and the costumes created that character. I mean, they forced you into a certain posture and a certain way of being and it really suited the strictness of Moira.”

As a family, Mackenzie [Isla Fisher] and her two daughters (Jillian Shea Spaeder and Willa Skye) have a pet dog named Bingo. But when Eleanor’s magic goes awry, Bingo is transformed into a pig. “The pig loved to interrupt takes, but the pig also loved to leave takes when it was supposed to be there,” Jillian Shea Spader joked. Like a real sister, Willa Skye added, “Yeah, she had one temper tantrum in the middle of a scene.” Isla Fisher reminded them of her own battle scar with their animal co-star. “And what about the trotters?,” she laughed. “I had to have her jump on me. She literally shredded my leg.”

Jillian Bell, whose character caused the dog to transform into a pig, came to her animal co-star’s defense. “I think that she had a different script than us, to be fair,” she joked. “Because she’s not in the conference, it feels terrible that we’re talking about her, you know? If she could represent for herself, then it’s fair,” she added. Let’s just hope the actress who played Bingo as a pig’s feelings aren’t hurt. 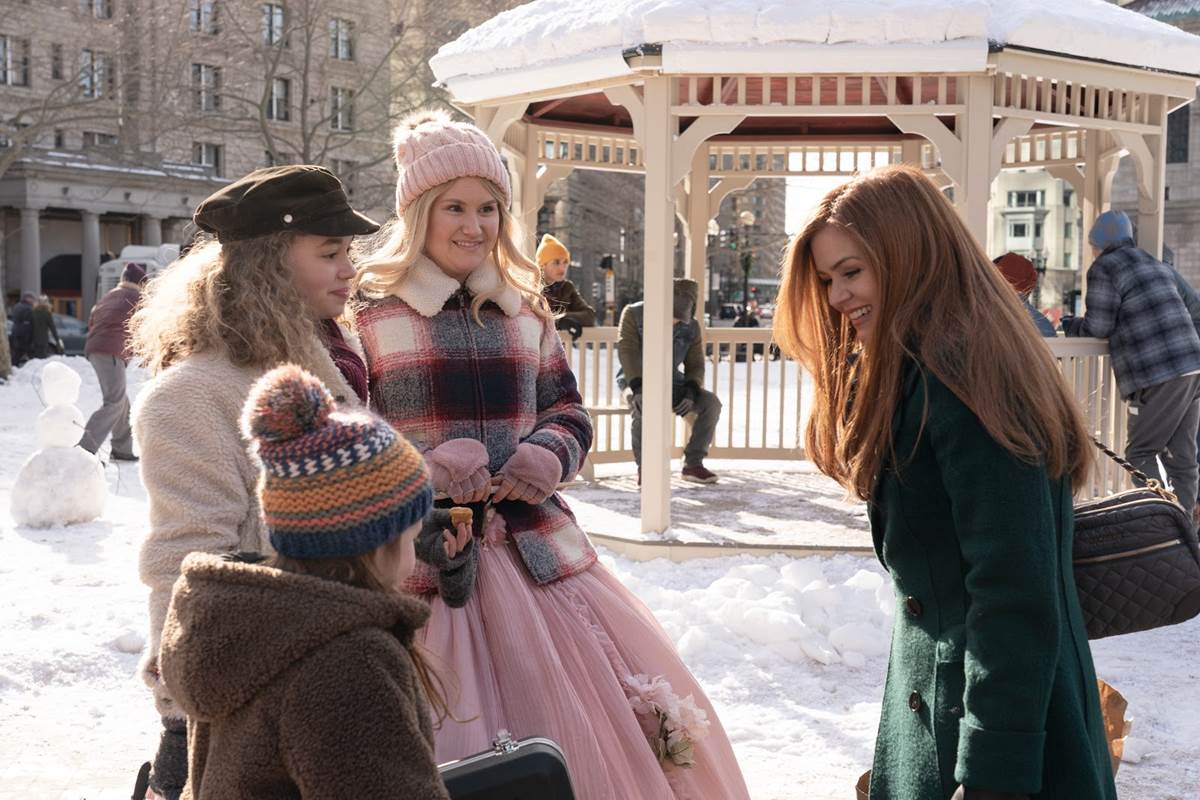 While Godmothered has a lot of magic, it’s the family bonds that will really connect audiences with these characters. One of whom is Jane, Mackenzie’s oldest daughter played by Jillian Shea Spaeder, who’s character has a big performance in the third act. “Filming the performance scene was really fun for me because I’m a singer and guitar player in real life. So, getting to do that and also getting to act was such a fun experience to do at the same time.” The young actress and singer also received a new dress for her character’s big moment, but the night shoot in the winter made for a chilly experience. “I was shivering, but Jillian Bell taught me a wonderful trick to breathe out the shivers and I took that with me the whole movie.”

You can experience the magic and family fun of Disney’s Godmothered starting December 4th only on Disney+.