Disney’s princesses have been captured in one way or another across a multitude of history and animation books, not to mention children’s books. However, they have never before been explored in such a way that showcases the beginnings, context, personalities and development of our favorite heroines in a clear, accessible way.

The latter is precisely what Charles Solomon’s The Disney Princess: A Celebration of Art & Creativity does, and more. 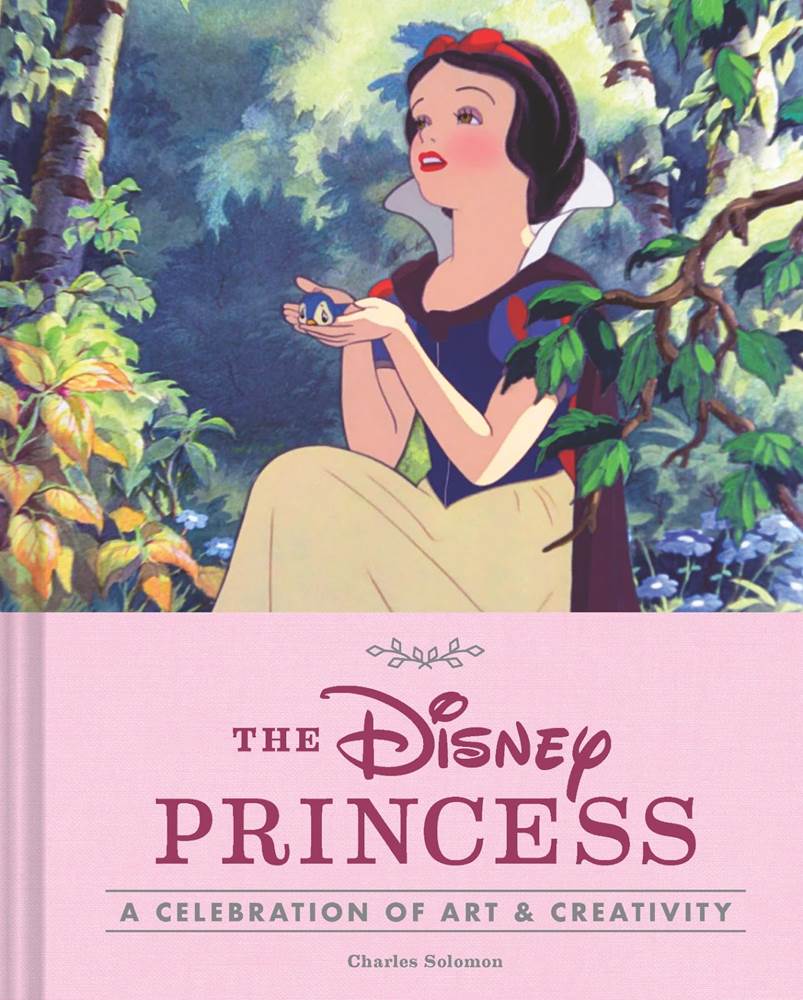 If you are one of the endless sea of Disney princess fans spanning across the ages, like I am, you might have wondered from time to time why no history or animation book dedicated thoughtfully and exclusively to the Disney princesses ever existed.

Thanks to The Disney Princess, no longer must we trawl through dense history books to better understand some of our favorite characters and why they have the impact that they do on our lives. Solomon takes us on a warm and welcome journey through the past and into the present – from Snow White through to Moana – addressing what can only be described as true ‘Disney magic’ in a sincere, thorough, and introspective way.

More than just a history book – discover the ‘princess evolution’

Beyond the more than 200 color images including concept art, storyboards, reference photos and other treasures shared from the Disney archives, what I found to be most engaging about The Disney Princess is the evolution of the princesses over time.

This ‘princess evolution’ means going beyond the rich history of twelve of Disney’s most beloved female characters and considering the groundbreaking developments inherent in their very existence.

For example, Disney princesses are created not merely to entertain, but to show fans of all ages, sizes and backgrounds that they are ‘regal.’ Anika Noni Rose’s words strike at the heart of the deep-seated sense of belonging that these characters tap into:

Furthermore, the book emphasizes the character’s right to pursue their dreams but makes clear that humanity and kindness are also worthy of emulation.

Solomon also highlights what, in his view, is the reactive nature of the classic princesses (Snow White, Cinderella, Aurora) who largely respond to what happens to them, while comparing it to the proactive nature of more modern princesses (Belle, Moana, Mulan, Merida) who go out in pursuit of their adventure. This builds upon the traditional assumption that the princess simply be beautiful and adds drive, determination, and deeper authenticity of emotion. Such a multi-layered approach not only makes characters more relatable, but more believable, transporting them from screens and storybooks into our own belief systems.

One great comparative example looks at how the characters respond to matrimony. Solomon writes:

Merida rejected matrimony; Jasmine and Belle found partners unexpectedly. Like Mulan, Moana acts out of duty to her family and her people. She never expresses any interest in marriage; her partner in her journey is the demigod Maui. They’re friends who share an adventure as Moana follows the ocean’s call.

Disney animator Eric Goldberg also makes clear that “now it's not enough for a princess – or any heroine – to say ‘someday my prince will come.’ Now, we’ve got not just the freedom but, I would say, the duty to create new kinds of princess characters.”

The evolution of the characters is therefore not only artistic (as Disney ventures beyond the days of strictly hand-drawn animation and engages new technologies) but emotional and cultural as well, drawing upon changing societal norms and values. 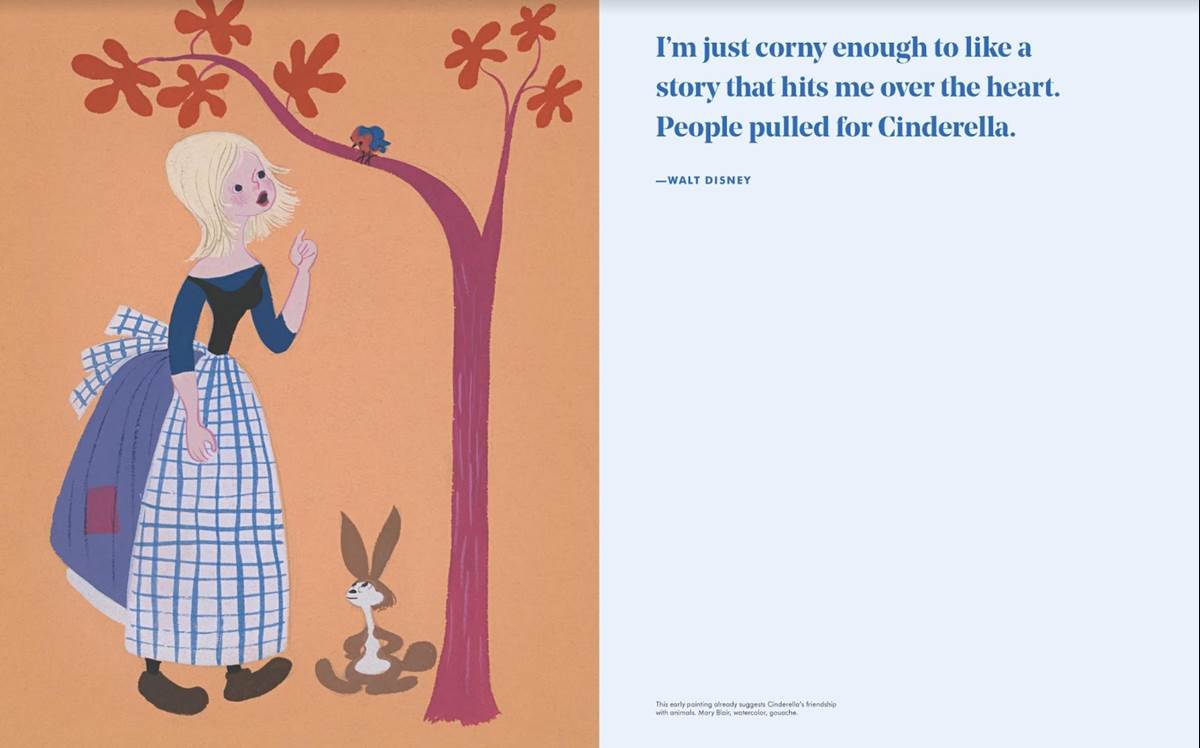 A treasure trove of inspiration, information, and trivia

The Disney Princess is separated into chapters for each princess, though thematically it can be broken down into the following six categories:

1) Early accounts – where these tales as old as time originated

2) The origins of Disney’s adaptation of classic stories

3) The uniqueness of each Disney princess

4) Context that surrounded the Disney films

5) Character development as compared to the princesses that came before

While some examples of these categories were discussed above, the role that context and visual inspiration plays is wonderfully expressed. Solomon draws parallels so beautifully in his descriptions of what the artists sought to achieve in creating individuality and an overall mood for each princess. He also extrapolates the stories and settings to give the reader a fuller picture of the characters and their circumstances. For example:

The individuality of Pocahontas’s look was especially evident in the memorable sequence in which she and John Smith meet for the first time… Allowing the visuals to tell the story gives [the] scene an almost mythic power that suggests an encounter in the Arthurian legends or Aragorn meeting Arwen in Lord of the Rings. [emphasis added]

If Prince Eric could trace his realm’s history to the Renaissance – or, better yet, ancient Rome or Greece – he and Ariel might have hosted a succession of prominent visitors. Artists, artisans, entertainers, and innkeepers would have enjoyed the income tourists provided. Ariel, Eric and their lands would have been mentioned in letters to members of governments and high society, and cited in published journals and travel guides.

Readers also get a taste of the vast array of challenges the artists face. Despite advances in computer processing power and more sophisticated software, hair allegedly remains one of the hardest things to do. The technical team had a tough time making Rapunzel’s 70-foot tresses realistic, so the motions of the hair instead had to be caricatured to reflect Rapunzel’s personality and assist in the storytelling. Ultimately, the team animated 147 tubes representing the structure of the hair, which was rendered into a final image with up to 140,000 individual strands.

Speaking of hair, Glen Keane reflects on his time animating Pocahontas, stating that “Marc [Davis] opened the door for me to think of hair in a very design-y, structural way, but with a fluidity and spirit that comes from within.” (Apparently Aurora’s golden curls were drawn to “float over [her] shoulders, emphasizing her dreamy infatuation with a newly met suitor.” I totally floated away with all these enchanting descriptions.)

These and many other animation facts and trivia are also revealed in this book. I relished in real-life behind-the-scenes magic as I learned that Brenda Chapman went from shy, quiet achiever to become the first woman to direct a Pixar film (Brave). I also appreciated Solomon setting the record straight that Snow White and the Seven Dwarfs was the first US feature, the first Technicolor feature, and the first musical; while recognition for the first feature-length animated film belongs to Quirino Cristiani’s El Apóstol (Argentina, 1917). (Snow White has, in the past, been held out to be the first feature-length animated film when this is not correct.) There is just so much to take away from this book. 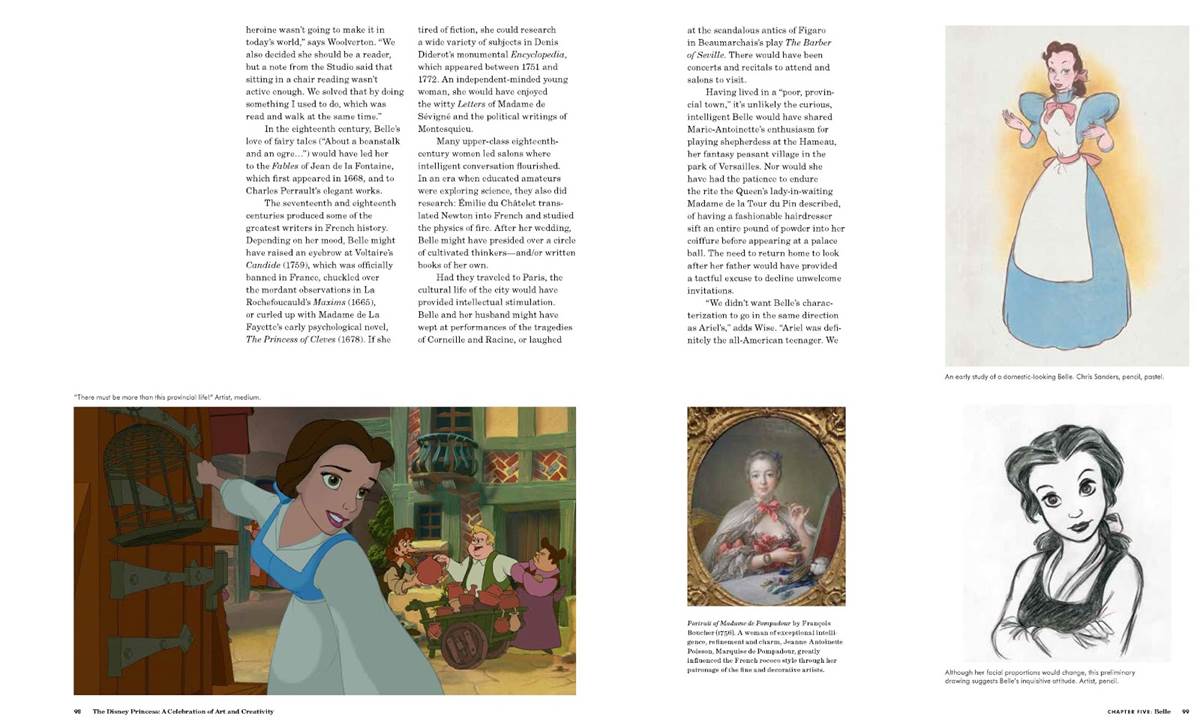 The Disney Princess: A Celebration of Art & Creativity is not to be missed

The Disney Princess is a must-have for Disney princess fans, historians and those interested in the multifaceted “how” and “why” behind Snow White, Cinderella, Aurora, Ariel, Belle, Jasmine, Pocahontas, Mulan, Tiana, Rapunzel, Merida and Moana. While the making of these films spans from the 1930s to 2016, this book takes the reader even further into the 15th, 16th, and 17th centuries and sets the stage for a thriving, continuing legacy. Solomon’s thorough and well-researched commentary is a breath of fresh air, making this read less textbook-y and more leisurely. Beautifully packaged with ribbon markers, dual finish and impressive holographic edges, The Disney Princess is the ultimate dreamy, definitive Disney princess book.

The Disney Princess: A Celebration of Art & Creativity was released on November 17 and is available for purchase from most booksellers.