The Wonderful World of Mickey Mouse is back today with two brand-new shorts, the fifth and sixth of this ten episode season. Get out your bell bottoms and your victrola because we’re heading back in time for some throwback fun this week!

Are you a “Macho Duck?” Because this short is heavily inspired by the 1980 album Mickey Mouse Disco. 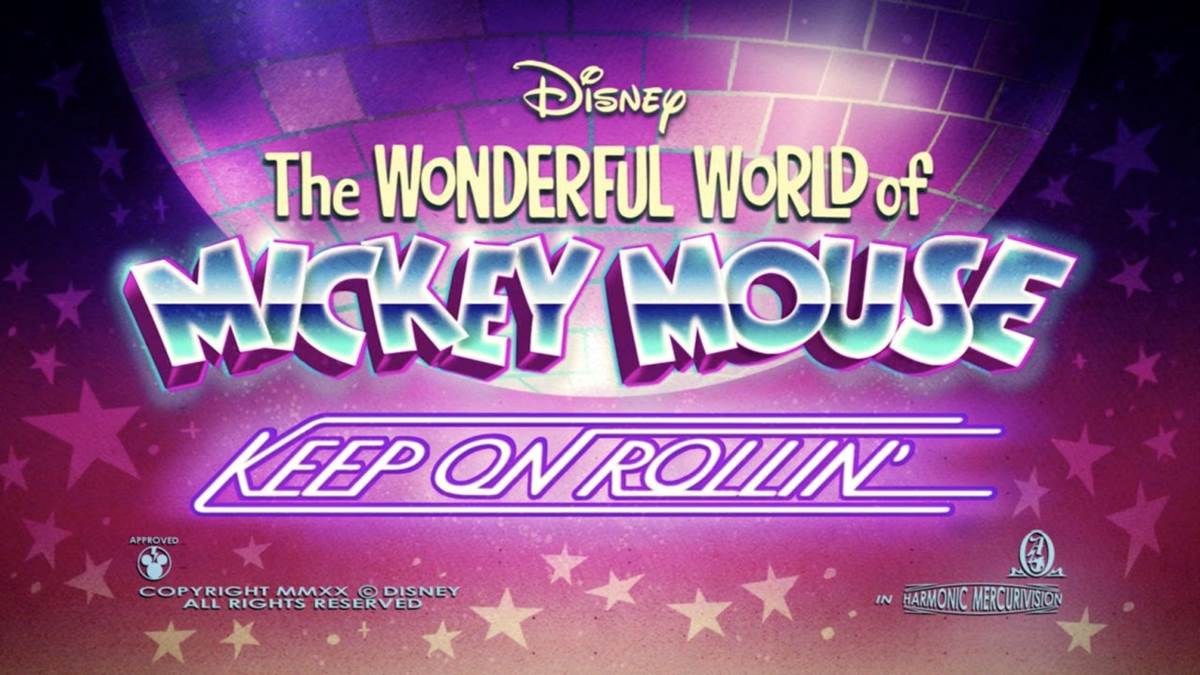 Enjoying a magical night at their favorite roller disco, Mickey, Minnie, Donald, Daisy and Goofy request a favorite tune from DJ Yensid (the sorcerer from Fantasia), who also owns the joint. Dancing with the Stars uses a fairly obvious Mickey-shaped disco ball on Disney Night, but Yensid’s is a little more subtle. But the party’s over when Pete and the Beagle Boys (from DuckTales) arrive with Pete’s date, Vanessa… If you thought Goofy was extra for having a rollerskate on his hat, wait until you see Ursula’s six skates on her tentacles! 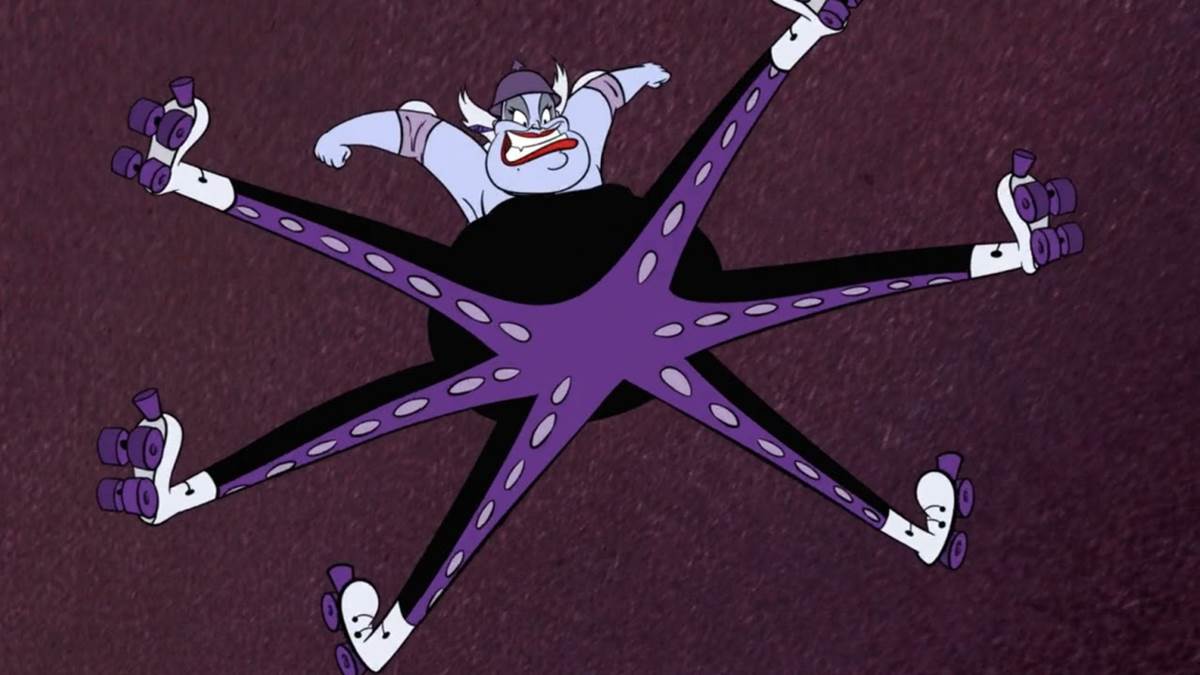 Okay, so maybe Goofy does still have Ursula beat. Kicked out of Yensid’s, the gang tries a vacant rooftop because heading to what they’ve heard is an abandoned ballroom. Do you see the hidden Mickeys in the chandelier? Oops! It looks like the master of the castle is none to pleased while getting ready for date night. This is Beast’s second appearance in the Mickey Mouse shorts, first appearing in the season 1 short The Adorable Couple. After a mishap attempt at Santa Monica Pier, they end up right back where they started. 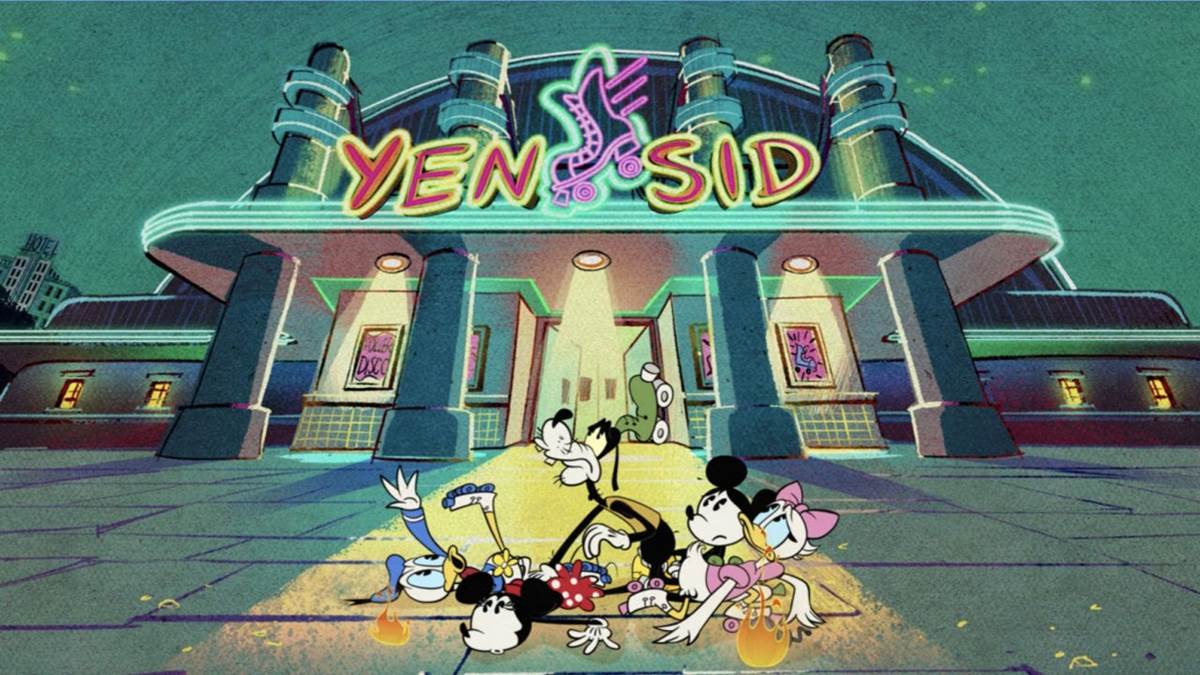 With renewed determination, they head back in and prepare to face off against Pete, Ursula and the Beagle Boys with a secret weapon, “The magic of disco!” Xanadu and Captain EO would be so proud of the way the sensational six magically revive everything and everyone, leaving Yensid’s more magical than it ever was before. 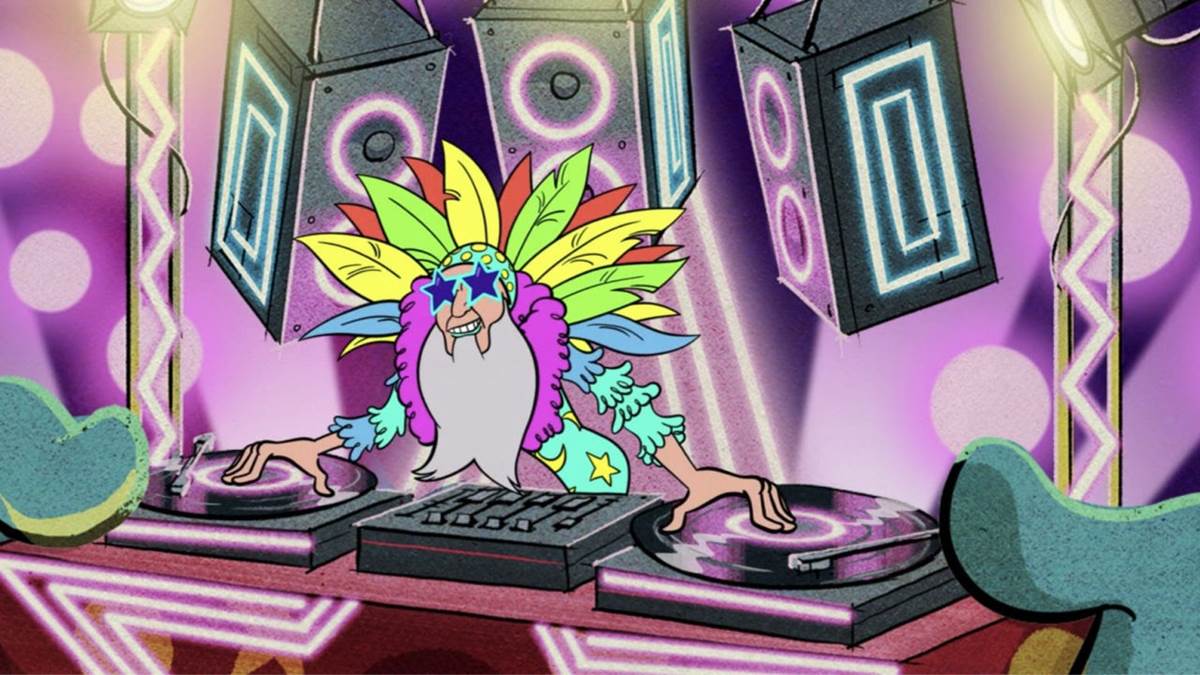 The “Boogie fever” is more than the baddies can handle and they flee after getting glammed up by disco’s undeniable magical properties. 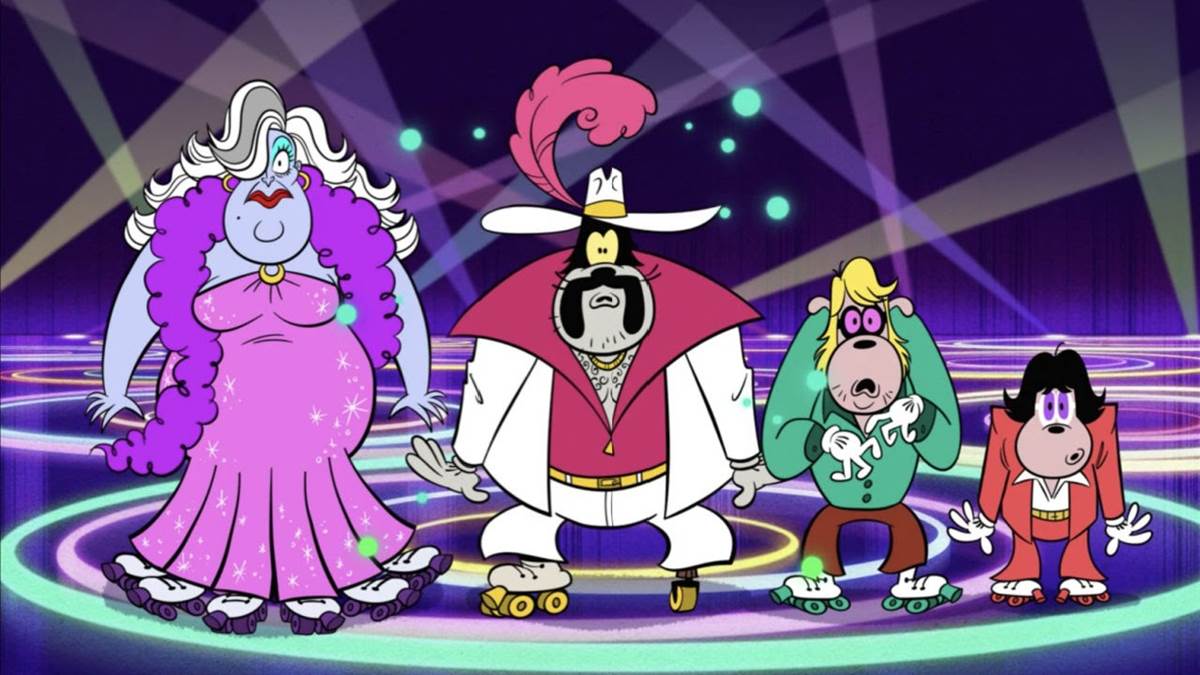 And that’s that on that. 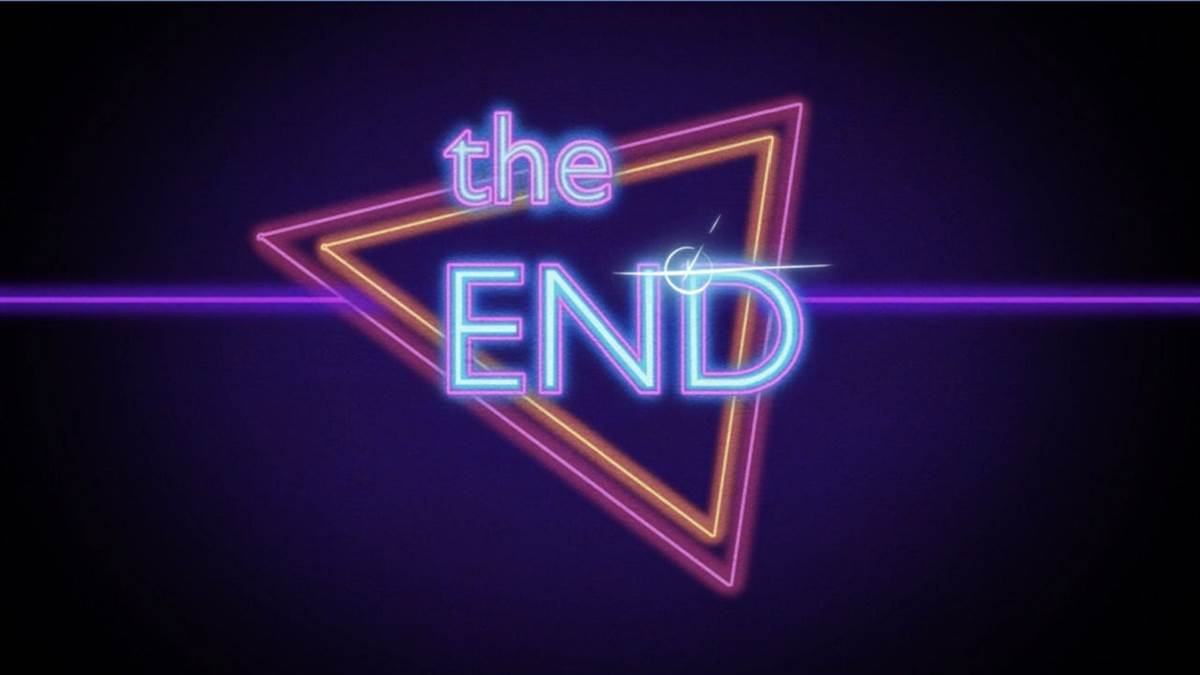 “Who’s afraid of the big bad wolf?” Everybody except Mickey. The villain from the classic short The Three Little Pigs and its protagonists enter Mickey’s world in this short, which starts with the Big Bad Wolf eating Fifer Pig, Fiddler Pig and Practical Pig. Oh no! Don’t worry, he doesn’t chew his food and Mickey witnesses the event, yanking them out of the wolf’s tummy and vowing to reform the villain into a good guy. 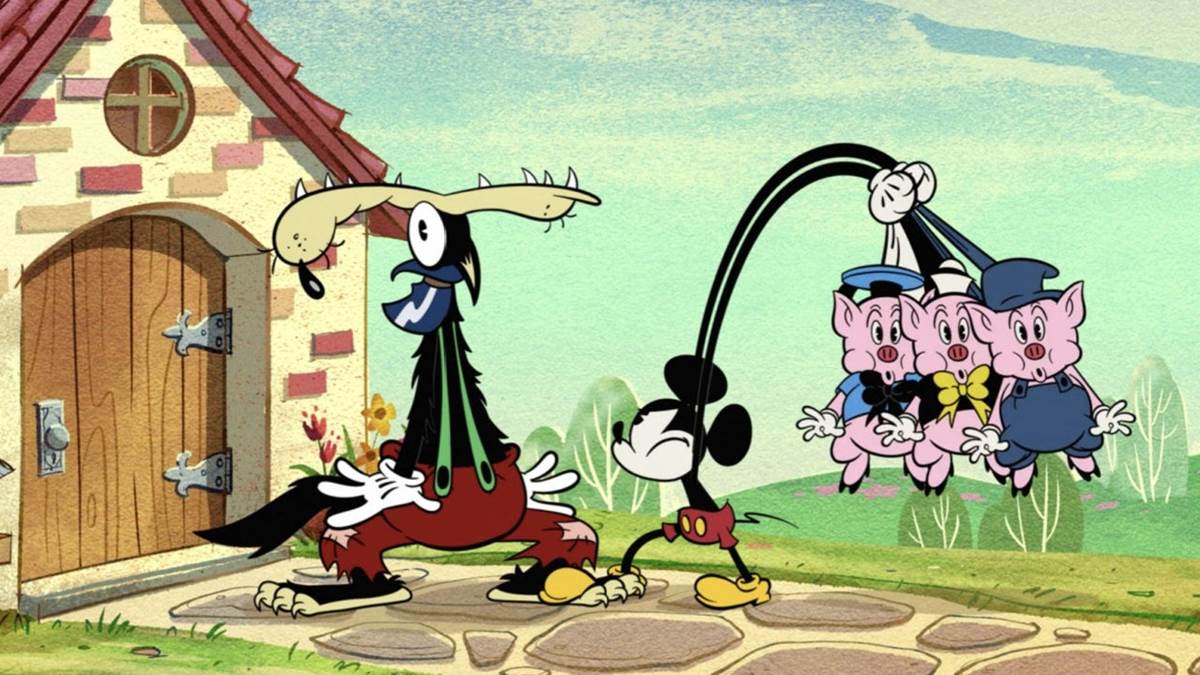 When the Big Bad Wolf tells Mickey it’s impossible, he pulls out one of Walt Disney’s most famous quotes: “It’s kind of fun to do the impossible.” The wolf goes along with it when Mickey says he’ll introduce him to everyone in town and for  his first good deed, they spruce up the flowers, making them look like the iconic Mickey Floral seen at the entrance of every Disneyland-style park. Behind Mickey’s back, the wolf swallows Minnie and tricks him into thinking he’s good now. Their next chore is to help Donald Duck and his nephews paint his boat, but while Mickey is inside, the wolf swallows them, too, painting them on the boat so Mickey won’t know. After cleaning up Goofy’s house, which features a lot of junk from his “How to” shorts, he swallows Goofy, too! Next up, they go to an old folks home to entertain them where Dippy Dog, the original incarnation of Goofy, is joined by a skeleton from The Skeleton Dance (seen last week) and many of Mickey’s old black & white era barnyard friends. They all end up in the belly of the wolf. As a thank you, the Big Bad Wolf invites Mickey Mouse to dinner. Mickey brings “Woolfie” a host gift, his very own Partners Statue where the wolf stands in for Walt Disney. When the wolf puts the statue on the shelf and asks if this is the three little pigs’ house, Goofy pops out to warn him to get out. 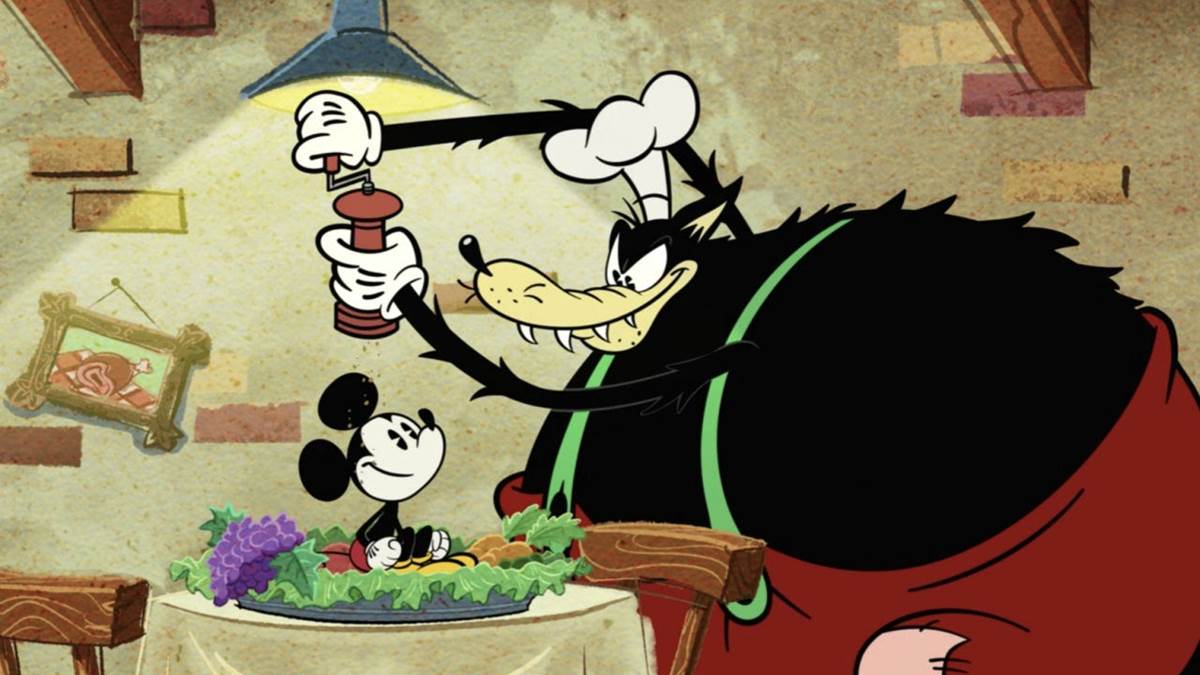 Putting up a fight, Mickey sees into the belly of the wolf and sees all his pals, plus a few other guests we didn’t see the wolf eat, like Dumbo and Timothy Mouse plus the saxophone prince from the Silly Symphony short Music Land. How did he get in there? After a shell game with food covers, Mickey traps the buttered up wolf in a doorway and pulls his tail to release his captives in a game of pinball. After losing a few hundred pounds, the wolf tries to blow Mickey into the fireplace, but he grabs a pepper shaker and douses the wolf in it, making him have the most epic sneeze ever. He flies off earth, cracks the moon, mars, venus and mercury in half and lands on the sun, who doesn’t care for its new beauty mark and flings it off. Feeling sad that he couldn’t help the Big Bad Wolf change, Goofy reminds him that he did help him change one thing: “His address!” The gang laughs as the camera pans up to the sun winking goodbye. We’ll see ya next week, folks!