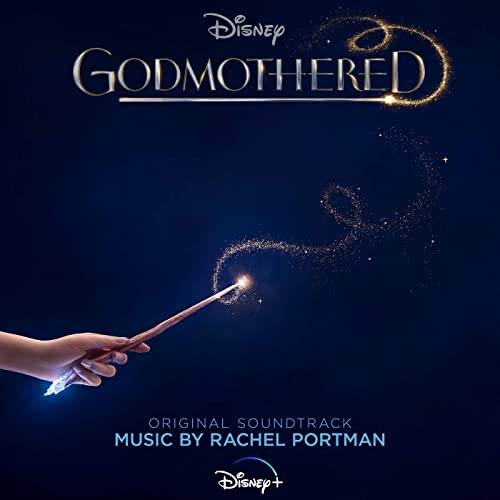 Disney’s Godmothered is casting a spell over Disney+ subscribers and you can stream the music anytime, anywhere with the release of the soundtrack from Walt Disney Records. Nearly an hour in length, the album is full of original score from Oscar and Emmy winning composer Rachel Portman, plus two songs by Jillian Shea Spaeder from the film. Fans of the music will also want to check out the newest episode of Disney’s For Scores podcast where Rachel Portman talks a lot about her score.

The score is nothing short of magical, with floaty and melodic pieces that lift the spirits, but also offer a sense of adventure and excitement. You feel as if anything can happen while listening to the twenty-seven score tracks. As Rachel Portman shared in the podcast, she was encouraged by director Sharon Maguire to write melodic themes, the easiest to remember of which bookends the film and represents the Motherland where fairy godmothers come from. There’s also an optimistic score for Eleanor’s character and a good collision of both can be heard on “The Assignment.” My favorite version of it is when it becomes really big on “Carriage Flight.”

Mackenzie’s theme is a more somber melody, evident on “Your Dearest Wish” and played again with acoustic guitar on “Hugh Prince Charming.” Gary the raccoon even gets his own theme, a catchy, almost danceable tune. And on the podcast, Rachel talked about the complexities of incorporating twenty-seconds of Rodgers & Hammerstein’s The Sound of Music into a montage, which occurs on “Mackenzie’s Big Day Out.”

Equally impressive as the music itself is the story behind it, as revealed on the For Scores podcast. Rachel Portman’s work on the film started from her home in the English countryside in May, writing themes from home and sending in synthesizer mock ups. Scoring the soundtrack had to follow strict guidelines that controlled how many musicians could be in the studio at a time, how far apart they had to be, and how long they could record for. It made the process take longer than usual, but for Rachel and the musicians, it was amazing to be back to work with other collaborators again.

The last track on the album is an original written for the film called “Hero” performed by Jillian Shea Spaeder. It’s an acoustic ballad co-written by American Idol alumni Maddie Poppe. It’s a beautiful song, but it almost plays too simplistic at the end of such a sweepingly magical album of score. The other is from the climax of the film, a cover of “Rise Up” mashed up with “Joy to the World.” Both are inspiring acoustic tracks.

The soundtrack to Disney’s Godmothered is a Disney music fan’s dream come true. It’s full of beautiful melodies by Rachel Portman with chimes and flourishes that give you goosebumps. It comes with two songs from the film by actress Jillian Shea Spaeder as a nice bonus. You can stream it now from your all major music providers.