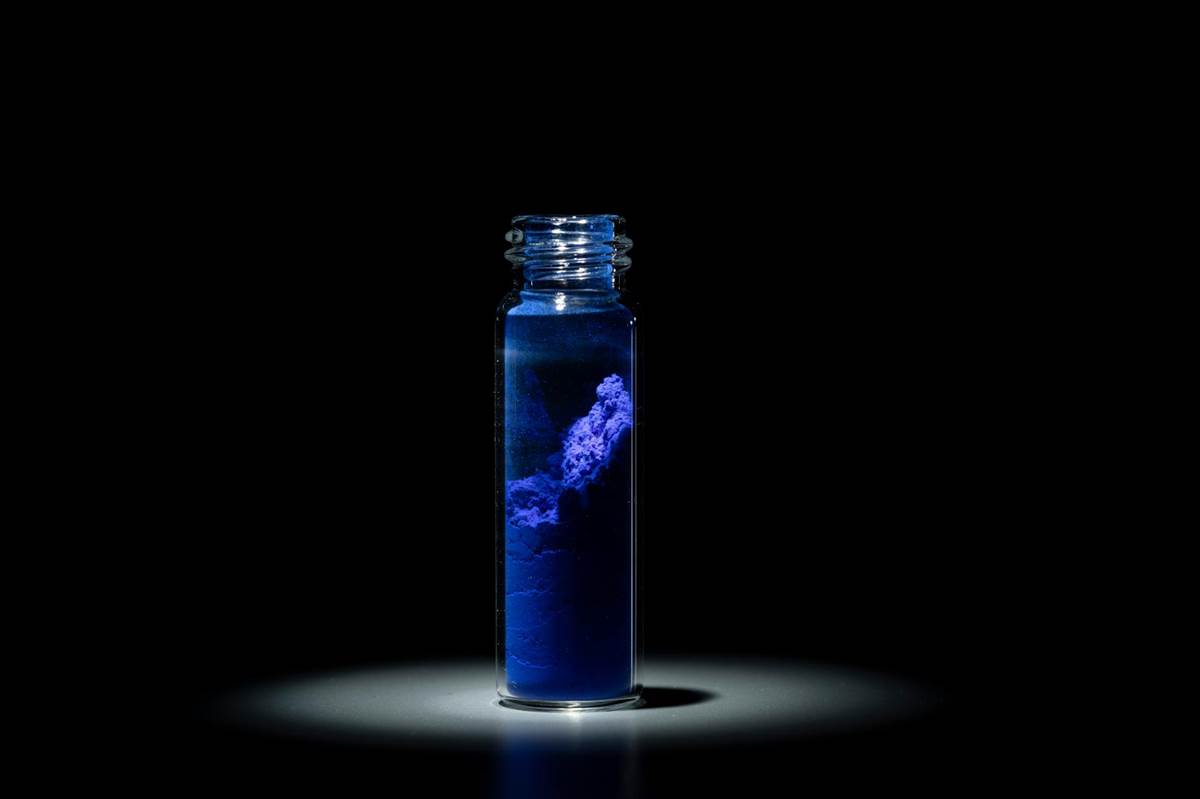 The Sherman Brothers, Richard and Robert, wrote the music for the original EPCOT attraction Journey Into Imagination where Dreamfinder created a fictional dragon out of thin-air with the lyric “From head to tail, he's royal purple pigment. And there, viola! You've got a Figment!” In this week’s episode of the Overheard at National Geographic podcast, not only is the subject on pigments, but also “Lucky chances” (another Sherman lyric from the song “Fortuosity”). The episode is titled “An Accidental Case of the Blues” and you can listen to it now on your favorite podcast app to find out how the first new shade of blue in over two centuries was recently discovered by accident.

Amy Briggs hosts this week’s episode as she returns to her National Geographic office where the photo above was being taken of a recently discovered new powdered pigment. Taking a peek inside the photo studio, Mark Thiessen uses lights brighter than daylight to take the photo you see above while photo editor Julie Hau tries to figure out the logistics of not only trying to accurately replicate the deep color in a photo, but how to keep it consistent in print. Thankfully for her, that responsibility ultimately rests on the shoulders of Elaine Bradley, senior designer for National Geographic magazine.

This recap will get into the new color itself in just a moment, but one of the most fascinating parts of the episode was Bradley’s breakdown of how readers hold a magazine and see all of these colors, but in reality they’re only actually seeing four: cyan, magenta, yellow, and black, the same colors that come out of your home or office printer. Her continuous challenge is trying to bring accurate colors to magazine readers each month, including the photo above, which can be found in the December issue in an article about the history of pigments and the strange things humans have made them out of over time, including “Mummy brown,” made from the dust of actual mummies!

On to the new pigment discovered, the last inorganic blue pigment discovered was cobalt blue during the Thomas Jefferson administration in 1802. This new inorganic blue pigment was accidentally invented in 2009 by Mas Subramanian, a chemistry professor at Oregon State University who was actually trying to create a material that will revolutionize computer memory. When synthesizing yttrium oxide (white), manganese oxide (black), and indium oxide (yellow), an unexpected blue pigment was formed that suddenly became valuable.

4.5 million tons of pigment were used in 2019 in paints and coatings, with inorganic pigments being common for house paints due to their durability. Mas Subramanian patented the color which required a name for it, which he based on the elements it’s made from: YInMn Blue. Due to the high price for indium, Mas tried to replicate the color by replacing the costly ingredient with titanium and zinc expecting a similar color. But instead, he produced a new purple. Swapping manganese for iron gave him a new red and other experiments led to new yellow, orange and green colors, too.

Highly pigmented powder is rare to begin with, which is why Mas has continued his efforts to find new pigments. He’s currently trying to create a new red, but says another chemist may have already created one and not realize what they’ve got. And in the same way that he accidentally created a pigment while trying to create new computer memory, the next major material used in computers could be a happy accident that arises out of trying to create a new pigment. You never know! Mas Subramanian currently holds over 60 patents, which include pigments and electronic materials.

The fourth guest in this week’s podcast was Narayan Khandekar, director of the Straus Center for Conservation and Technical Studies at Harvard Art Museums. He added more insight into pigments for this episode by talking about his work with the Forbes Pigment Collection, founded by Edward Forbes himself to help identify and devalue counterfeit works of art. The program examines the paint components in artwork to determine if the paints used came from pigment sources that were discovered at the time of the original work. When they find pigments used that were discovered after the date of the painting, they know it’s a fake.

You know your color has made it big when Crayola wants to turn it into a crayon, which has already happened with YInMn Blue. If you’re looking for it in the big box, look for the color named “Bluetiful.” It all comes full circle for the National Geographic team trying to recreate the color in print out of the four-color printing process and you know the Crayola wizards must’ve worked hard on this project too.