Welcome to the next edition of Disney Extinct Attractions. My name is Cole Geryak, and I’ll be your dream master on today’s unofficial trip into imagination.

Just yesterday, it was announced that a new projection show called Once Upon a Time will be arriving in the Magic Kingdom on November 4th, replacing the beloved show Celebrate the Magic. Having recently seen Celebrate the Magic, I think that the show is fantastic, but I am excited to see where this new show will take us. Framed around Mrs. Potts talking to Chip, the show also features scenes from Alice in Wonderland and Peter Pan, so it basically features my three favorite Disney films. Ok, so I may be a little biased, but I’m sure that the show will help guests’ imaginations run wild with magical possibilities.

But with that said about the present, it’s now time to travel back to when the show was just a little spark in Figments of Imagineers’ Imaginations. 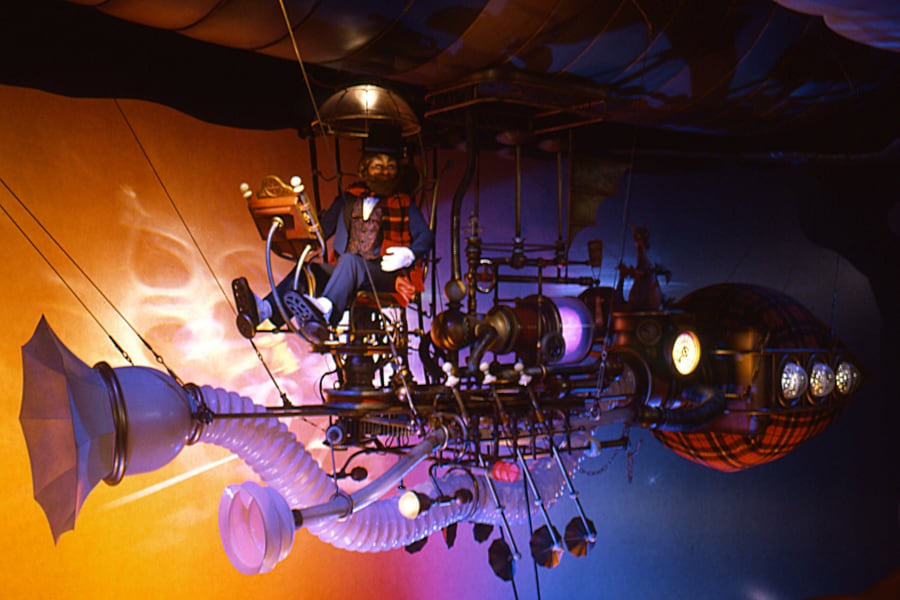 The Experimental Prototype Community Of Tomorrow (EPCOT) opened at the Walt Disney World Resort on October 1, 1982. The park had two main areas, Future World and World Showcase, with both of them being split into different pavilions. While World Showcase was comprised of areas representing different countries from around the world, Future World was divided a little differently with pavilions based on the Land, the Sea, Energy, and Imagination. Wait, Imagination you say? 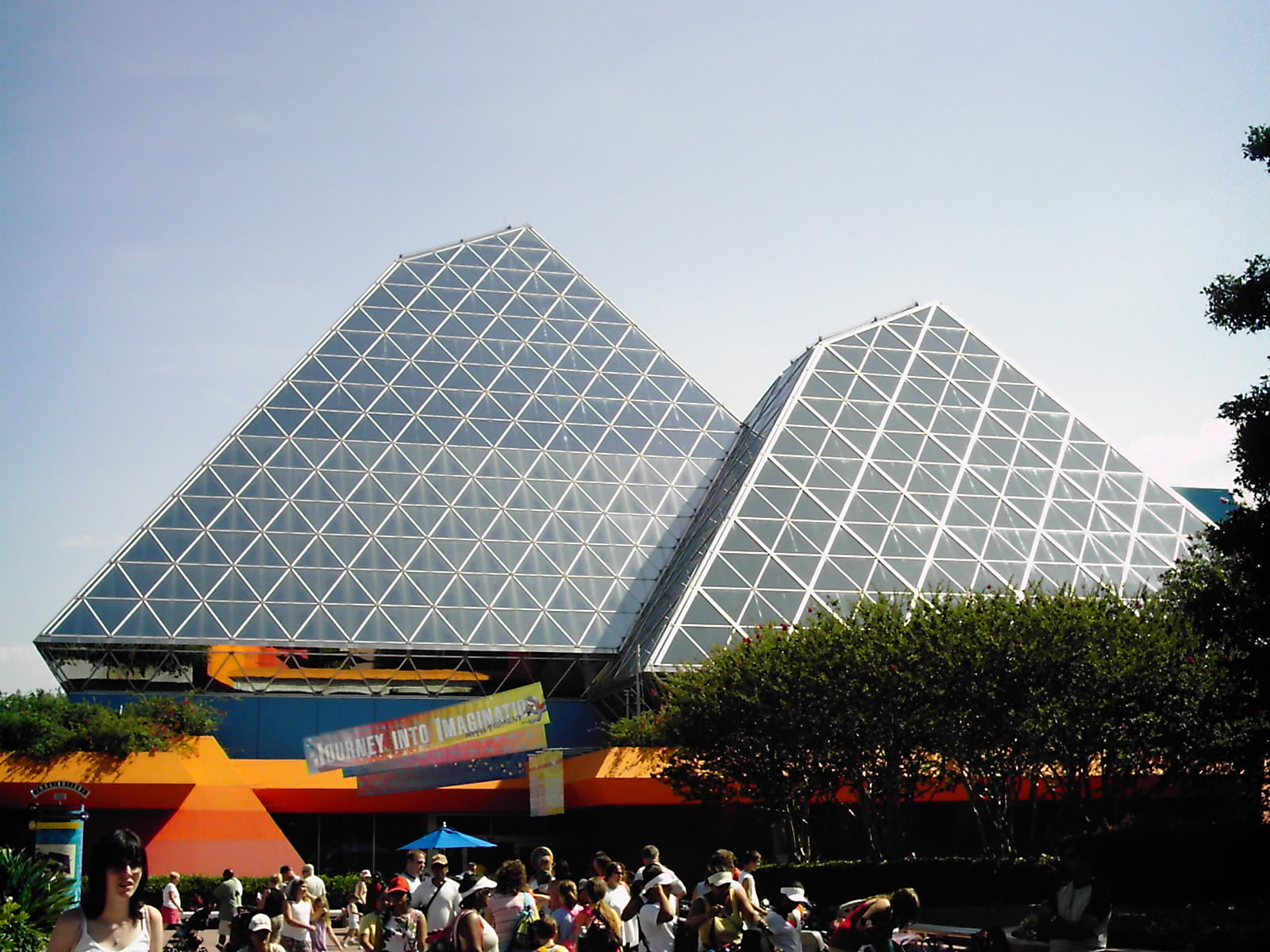 Journey into Imagination focused on the adventures of Dreamfinder and Figment as they emptied all the ideas they had collected in their Dream Mobile into the Dreamport, basically a storage area for ideas.

Guests went on a journey through this Dreamport and through areas based on Art, Literature, the Performing Arts, and Science. All throughout, Dreamfinder and Figment acted as guides showing how all of these wonders combined to form Imagination. But that’s all I’m going to say because I don’t want to spoil it for those who have never seen it. The quality is not the greatest, and it’s really hard to hear, but it is truly is a classic attraction and feels very different from any experience in the parks today.

One of the reasons that the attraction is so visually beautiful is because it had the great mind of Disney Legend Tony Baxter behind it. Baxter is one of the best-known Imagineers, with a big hand in some little projects like Big Thunder Mountain Railroad, Splash Mountain, and Disneyland Paris to name a few. 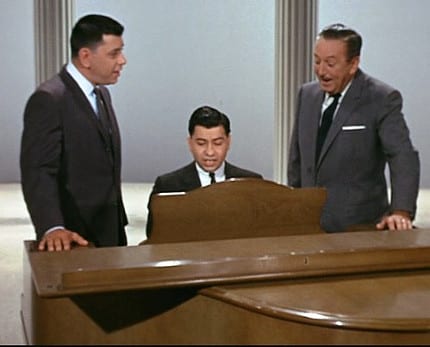 Via The Main Street Mouse

But Baxter wasn’t the only Disney Legend with an impact, as the Sherman Brothers wrote the theme of the attraction called “One Little Spark” (which you can hear below). The song’s very catchy tune is just one of those songs that you’ll keep singing in your head all day. It also inspired the title of Disney Legend Marty Sklar’s second book, showing how much that song truly represents the Imagineering method.

Speaking of “One Little Spark” and its influence on Sklar, this attraction perfectly encompasses the Imagineers’ core message: creativity guides creation and anything is possible if you simply follow your dreams. This message shines through in every single attraction that Disney creates and truly represents what Walt was trying to accomplish with the Happiest Place on Earth.

With that in mind, the Imagineers used their imagination when thinking about how to show a large amount of guests the same scene at the same time, while not slowly down the rest of the attraction.

The big circle in the middle of the picture was a giant turntable that allowed guests to view a two-minute scene of Figment and Dreamfinder simultaneously. The method helped increase the capacity of the ride, while also being unlike any ride mechanism I have seen before or since. Honestly, I’m pretty surprised that it was not really worked into many future Disney dark rides because it worked so successfully. 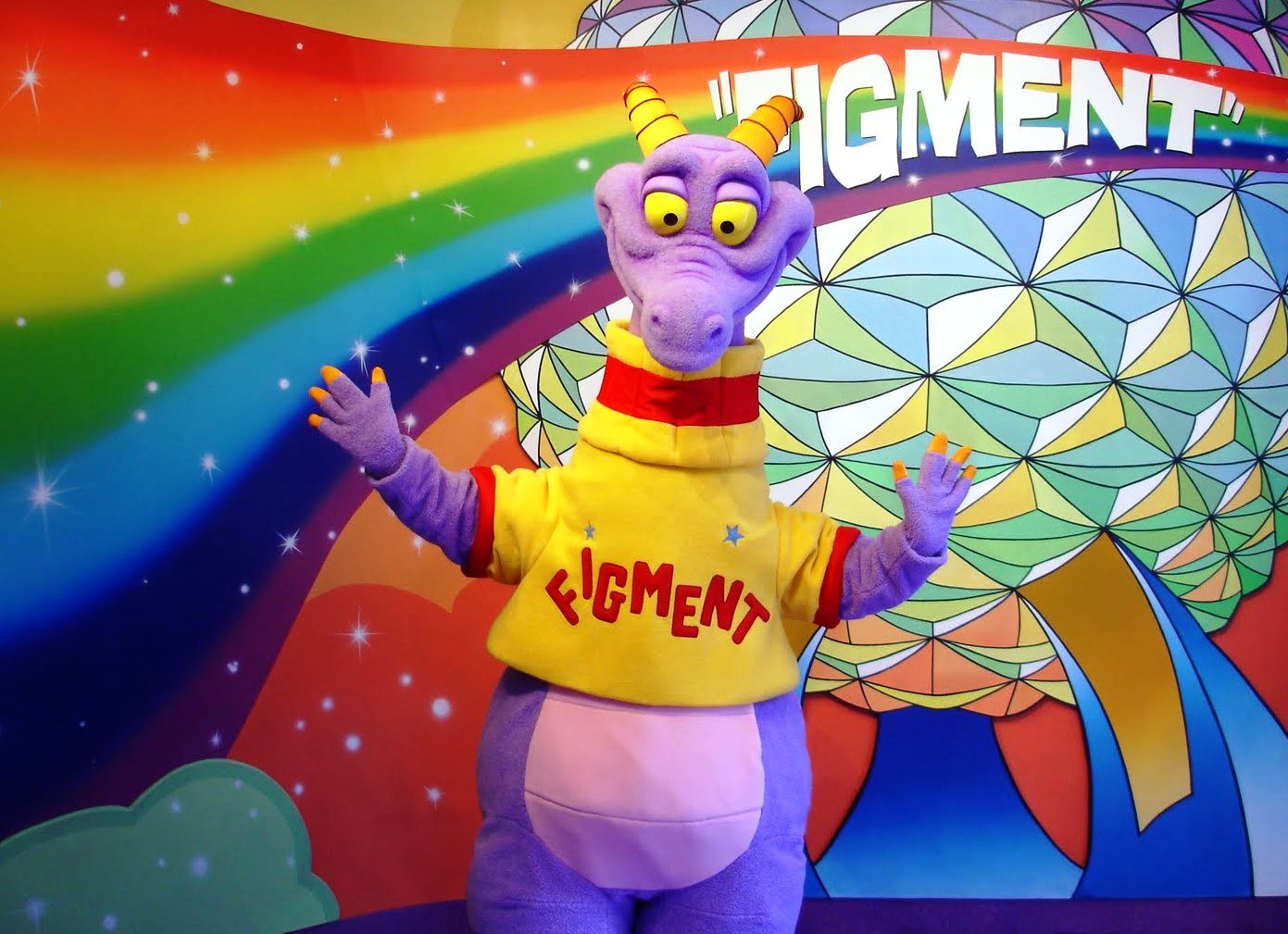 While that part of the attraction was really interesting, the real breakout star of Journey into Imagination was Figment. Disney fans quickly became enamored with the creature with “two tiny wings, eyes big and yellow, horns of a steer,” and a “royal purple pigment.” A big part of his popularity has to lie in the fact that Epcot is not as kid-friendly of a park as other Disney parks, especially when the park first opened. Most everything was centered around innovation and the countries of the world, generally not things that kids find as interesting as Mickey Mouse and Peter Pan. Figment filled that market gap and became the park’s unofficial mascot. Everyone went crazy for him, and that love continues to this day, as seen by this adorable duo of Figment and Dreamfinder. 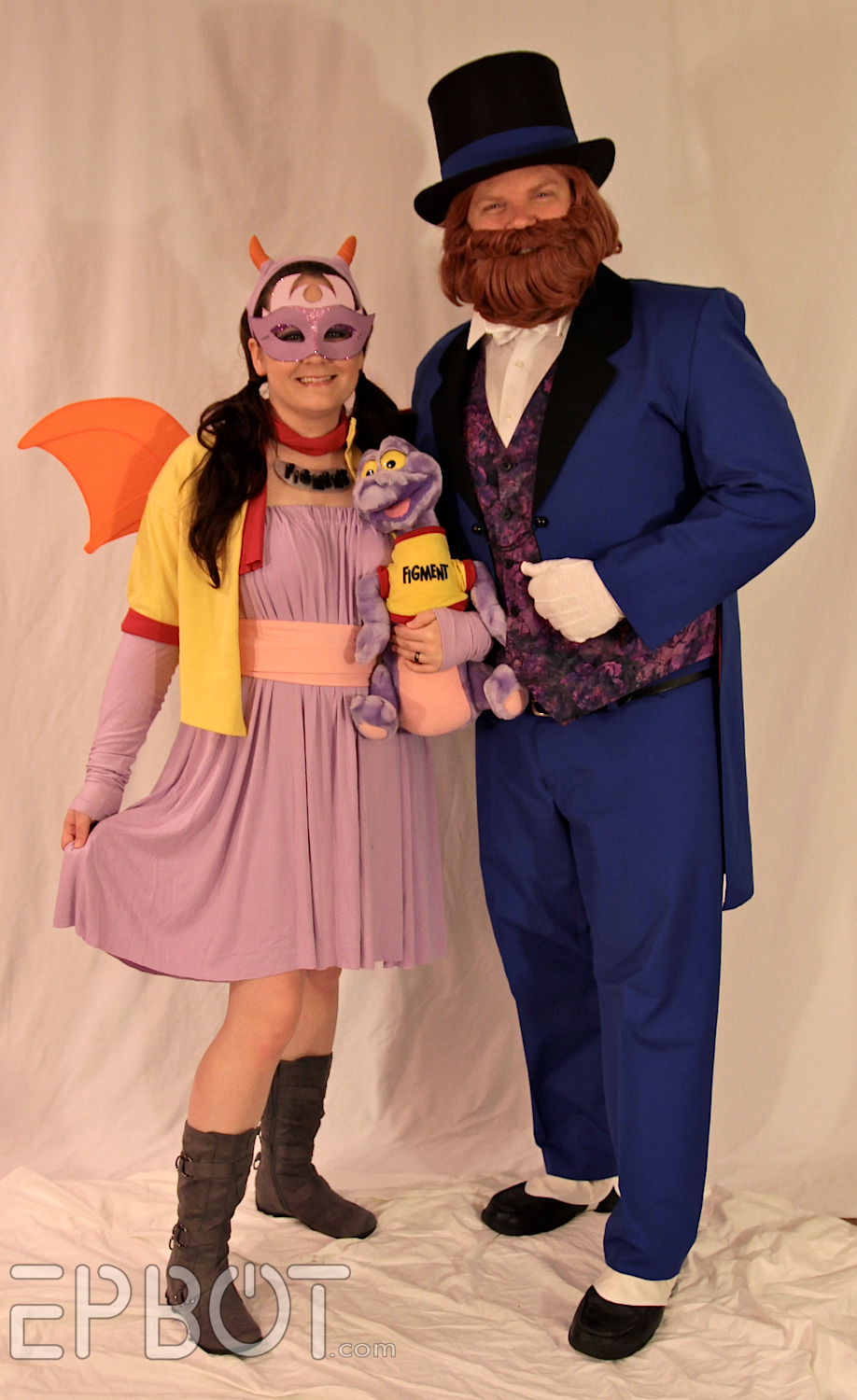 All of this love could not save the original attraction, however, as it closed on October 10th, 1998 to transform into Journey into YOUR Imagination. This attraction was panned almost immediately upon its opening on October 1st, 1999 (Epcot’s 17th Anniversary), because it completely revamped the attraction to focus on the world of Honey, I Shrunk the Kids, while also taking out Dreamfinder completely and reducing Figment to a minor role. 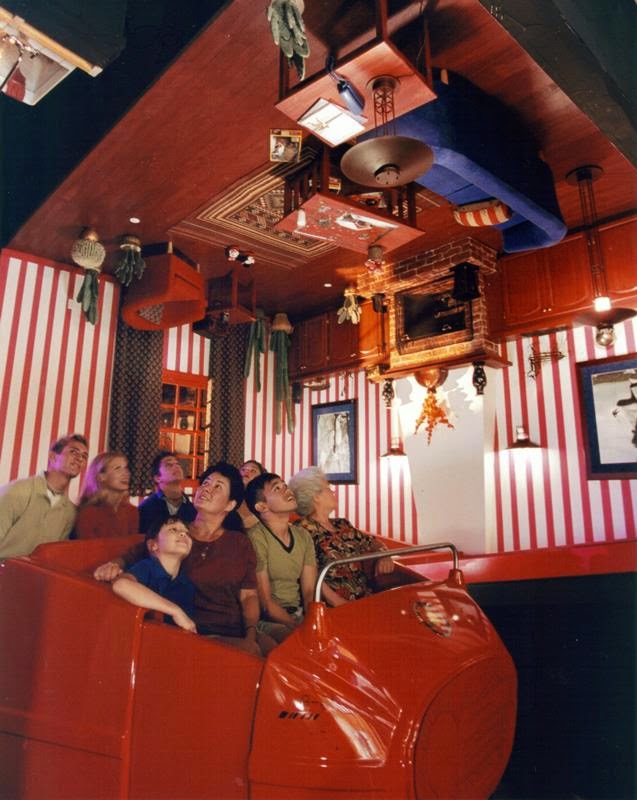 I understand that Disney is a company of change, and attractions need to go eventually, but I feel as if they could have a better job here. They took a ride that was pretty universally enjoyed, with a character who was the unofficial mascot of the park and changed it to make it shorter and focus on a property where the output was becoming more and more stale with audiences and reduce everyone’s favorite character to a mere cameo. Simply changing one of those factors would cause a lot of ire in guests, but implementing all of them meant the attraction never really had a chance.

That aside, I really did not think that the attraction was as bad as everyone said it was. Instead of focusing on the Dreamport, guests are now transported on a tour of the Imagination Institute featured in the attraction Honey I Shrunk the Audience. Guests now saw different rooms based on Sound, Illusion, Color, and Connections. It is definitely not as good as the original attraction, but it does have its moments throughout. Plus, Eric Idle serves as your tour guide, so that is always a plus. 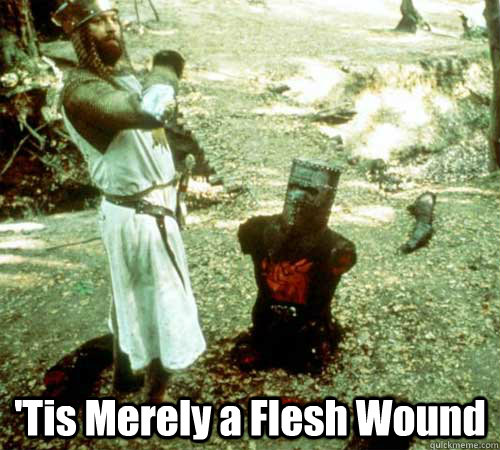 If you are interested in checking out the attraction for yourself, you can find it right below. Interestingly, they completely scrapped the use of the turntable for the second iteration of the attraction. Also, the entire ride as a whole is much shorter because they moved ImageWorks (an interactive area geared towards fostering the imagination) from the second floor of the building to the exit of the ride on the first floor.

The main reason people disliked the attraction, though, was the absence of Dreamfinder and the extremely reduced role of Figment. These characters really made the original attraction the classic it was, but they seemed to be persona non grata within Journey 2.0. However, the Imagineers listened to the fans and closed Journey into YOUR Imagination on October 8th, 2001, barely two years after it had opened. The attraction was reimagined yet again with Journey into Imagination with Figment opening on June 2nd, 2002 and it still stands there to this day.

Alas, this is a blog about former Disney attractions, so since we are back in the year 2016, that means our time has come to an end. But in case you were wondering, Figment did return (though not in a way that many would have hoped for and without his pal Dreamfinder).

Now that you know all about the Journeys, here are the three clues about next week’s post, per usual.

1. Two of the three attractions that will be discussed closed this year.

2. All of these attractions could only be seen at one time of the day.

3. These attractions appeared in two different parks, with one of them making appearances in both parks.

As always, I hope you enjoyed what you read and be sure to reach out through the comments below or any of the links located on my bio. I always love hearing what you had to say, so don’t be shy!