Week two of our ‘Christmas Countdown’ brings us to 1996 and the superstar pairing of Whitney Houston and Denzel Washington in The Preacher’s Wife. Directed by comedy legend Penny Marshall, a down on his luck minister seeks divine help at Christmas time. The film was a disappointment at the box office when it was released but is it a Christmas clunker or a hidden gem waiting to be seen? 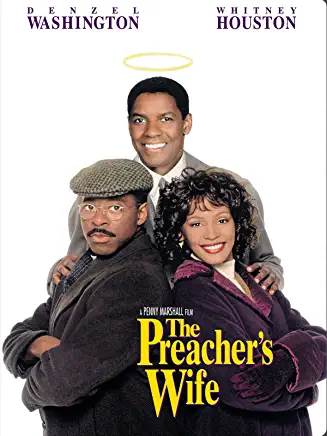 Reverend Henry Biggs (Courtney B. Vance) needs help. As the minister for St. Matthew’s church, Henry is pulled in a multitude of ways by the needs of the community. While trying to serve his congregation and the community Henry has trouble being an attentive father to his son Jeremiah and husband to his wife Julia (Whitney Houston). Appealing for some divine intervention, Henry meets an angel named Dudley (Denzel Washington) who has been sent to help.

Dudley hasn’t been on Earth in a long time, and after being rejected by Henry at their first meeting, Dudley inserts himself into Henry’s life both professionally and personally. While he works to help Henry navigate the biggest difficulty of all, a lack of faith and content, it seems like the only thing that Dudley can do is to motivate Reverend Biggs to not give up on his community.

It’s up to Henry to correct his own life. While Dudley has his own issues when he develops feelings for Julia, he continues to stay on his mission to help Henry and spread some of his divine power.

As Henry sets about to free a local youth from jail, and to terminate a development offer from real estate magnate Joe Hamilton (Gregory Hines), Dudley looks for a way to assist the crusading Reverend Biggs. Visiting Joe, Dudley uses some cosmic abilities to help the millionaire mogul come back to the community that he has long forgotten. By Christmas time, Dudley’s visit is forgotten by all but Jeremiah, and the community has healed for the better.

Denzel Washington is utterly charming as Dudley. He brings a joyful presence to the screen, and though he is a fish out of water, his wit and wisdom makes Dudley a wonderful addition to any scene.

Courtney B. Vance is phenomenal as Reverend Biggs. He is a good person who has lost his spark for life. As a minister to the community, Biggs faces pressures from all sides. Vance brings a humanity to a man that is tired from the stress and pressure of life.

The Preacher’s Wife has a phenomenal soundtrack filled with the talent of a multitude of gospel singers and the immortal Whitney Houston.

The story is filled with a multiverse of subplots that takes away from the drama that the Biggs family is enduring. We have the struggles with the failing church, Joe Hamilton trying to buy up the neighborhood, the disconnect between the Biggs family, the removal of Jeremiah’s friend Hakim by Child Services, the tension between Dudley and Julia, plus Henry is trying to free a kid who has wrongly been arrested for a robbery. Having multiple subplots takes away from the film and makes Henry’s story seem less important.

Whitney Houston is a great actor, but she doesn’t have much to do in this film. Most of the plot is framed around setting her up to belt out a musical hit. I feel like she could have had a couple of musical numbers, and then spent more of the movie exploring Julia’s relationship with Henry. Unfortunately, she isn’t allowed to shine as an actor in this movie.

The cast is great, the story is charming, and The Preacher’s Wife is all about the power of faith and how one person rebuilds his faith with a little divine help around Christmas time. Unfortunately, too many subplots and a focus on making Whitney Houston constantly sing water downs the film.

I would give The Preacher’s Wife a 2 Golden Popcorn Bucket rating. There are moments of joy amongst the clutter, and Whitney Houston hits every musical note out of the park.

Next week on our ‘Christmas Countdown’ we look at holiday favorite The Nightmare Before Christmas and decide if it’s a Halloween or Christmas movie.