The second season of Peyton’s Places is in full swing and it follows the NFL great around the country as he explores the history of the National Football League, one piece at a time. The fourth episode features Peyton sitting down with another all-time great quarterback in Fran Tarkenton, as they discuss his career and how he changed the position forever. 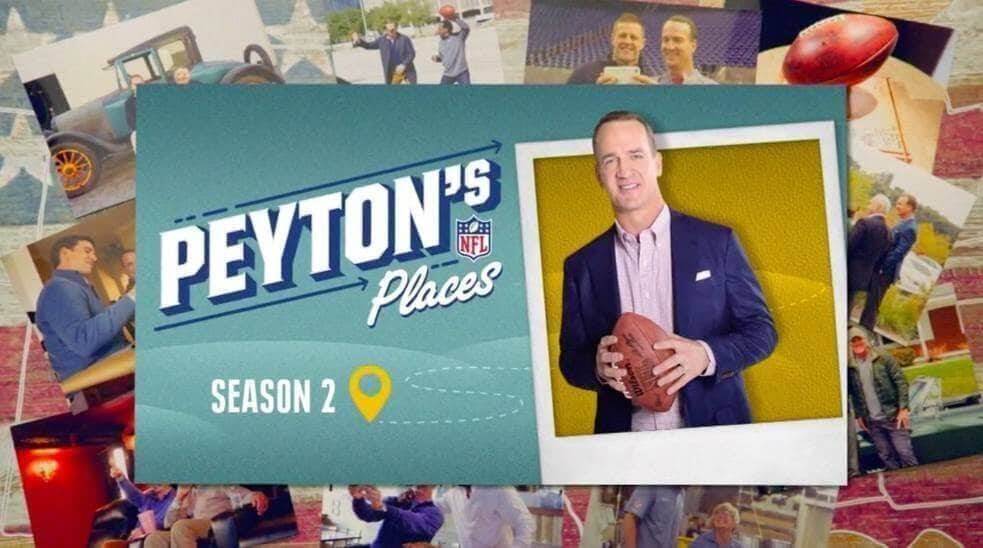 The episode opens with Peyton and Tarkenton walking into Sanford Stadium, home of the University of Georgia football team, where Tarkenton played his college ball. Peyton, being an alum of the University of Tennessee, was a little uncomfortable in enemy territory. To make matters worse for Peyton, they run into Uga, the Georgia Bulldogs’ mascot. In a humorous opener, the two try to make peace after their long rivalry.

After the show’s intro, Peyton and Tarkenton sit in the UGA lockerroom to talk some football. They open by talking about Tarkenton’s background as the son of a minister. That leads into talk about Tarkenton’s playing style as the first real scrambling quarterback. We get to see all kinds of great highlights as the former Minnesota Vikings quarterback admits that he never would have made it as a pocket passer. Peyton credits Tarkenton with creating the concept of a scrambling quarterback as we see highlights of present-day quarterbacks Patrick Mahomes and Russell Wilson.

Tarkenton then tells a great story from his college days. He was a red-shirt freshman at Georgia and wasn’t supposed to play at all. In a game against Texas, Georgia was struggling offensively and was trailing 7-0 so Tarkenton was begging the coach to put him in the game. When the coach refused, he sprinted out onto the field himself and took over. He led the team down the field for a touchdown and then proceeded to wave the kicker off the field so he could throw a two-point conversion to take the lead. Texas would come back and score and Tarkenton was benched after that. These are the kidneys of stories that make Peyton’s Places special.

They then get into Tarkenton’s pro days as we see highlights of his first game. We also get to see interviews with great defensive players like Deacon Jones and Merlin Olsen who express their hatred for playing against Tarkenton.

Peyton asks about who was allowed to call Tarkenton “Francis” rather than “Fran.” He admits the name Fran came simply because when he would sign autographs it was easier to sign “Fran” than “Francis.” He went by the latter in college but when he made the pros it wad “Fran” that stuck.

The two discuss Tarkenton being traded to the New York Giants from the Minnesota Vikings, who opted to go with a more traditional pocket quarterback. Tarkenton talks about how his Giants teams didn’t have much to work with, but because of the introduction of the West Coast Offense, they always led the league in passing.

Tarkenton was later traded back to Minnesota and led the vikings to six straight division titles. The quarterback admits he wasn’t as good then as he was the first time he was in Minnesota, but he had better teammates. He went on to be the league MVP in 1975 and the first quarterback to take a team to the Super Bowl three times in four years. While they discuss these accolades, we get to see more and more incredible Tarkenton highlights. The mood of the episode changes when they begin discussing the 1975 divisional playoff game against the Dallas Cowboys. The Vikings lost that game on a Hail Mary throw and Tarkenton tells the story of what happened to him after the game. He went to a winnebago outside the stadium where the team would wait out the crowds the watch other football games. While watching the game, Tarkenton saw a news bulletin explaining that his father had passed away. We hear the actual audio from that bulletin as we see Tarkenton’s face in a chilling moment. Tarkenton explains that’s how he found out about his father’s passing in what he calls a “pretty bad day.”

While it’s hard to move past that moment, they begin discussing Tarkenton breaking the passing record of Johnny Unitas. Peyton explains that, by the time Tarkenton retired, he held the record in every major passing category. Of course, Peyton surpassed all of those numbers but the game has changed quite a bit over the years.

In what is one of the most fun segments of the episode, they discuss how Fran Tarkenton was the first athlete to ever host Saturday Night Live and we even get to see some clips from the episode. They then get into another show Tarkenton hosted called That’s Incredible, on which they “discovered” a five-year-old golfer named Tiger Woods. So not only do we get to see old highlights of Tarkenton playing football in this episode, but we also get to see a young Tiger Woods play golf. Peyton jokes that he never got an invite to be on the show as we see a clip of him and his brother playing football in the backyard.

To wrap things up, Peyton asks if the pocket-passing quarterback will ever make a comeback. Tarkenton explains that the game has changed and he thinks quarterbacks will need to be mobile from here on out. He talks about how different the game was even when Peyton was playing and that it’s even more different now.

This is yet another great episode of Peyton’s Places and I would even say it’s one of the best. All it’s missing is some classic Peyton Manning shenanigans, but we do get some great jokes and even an incredibly emotional moment, something that is not often found in this series.