Review: “The Nightmare Before Christmas” Tarot Deck and Guidebook 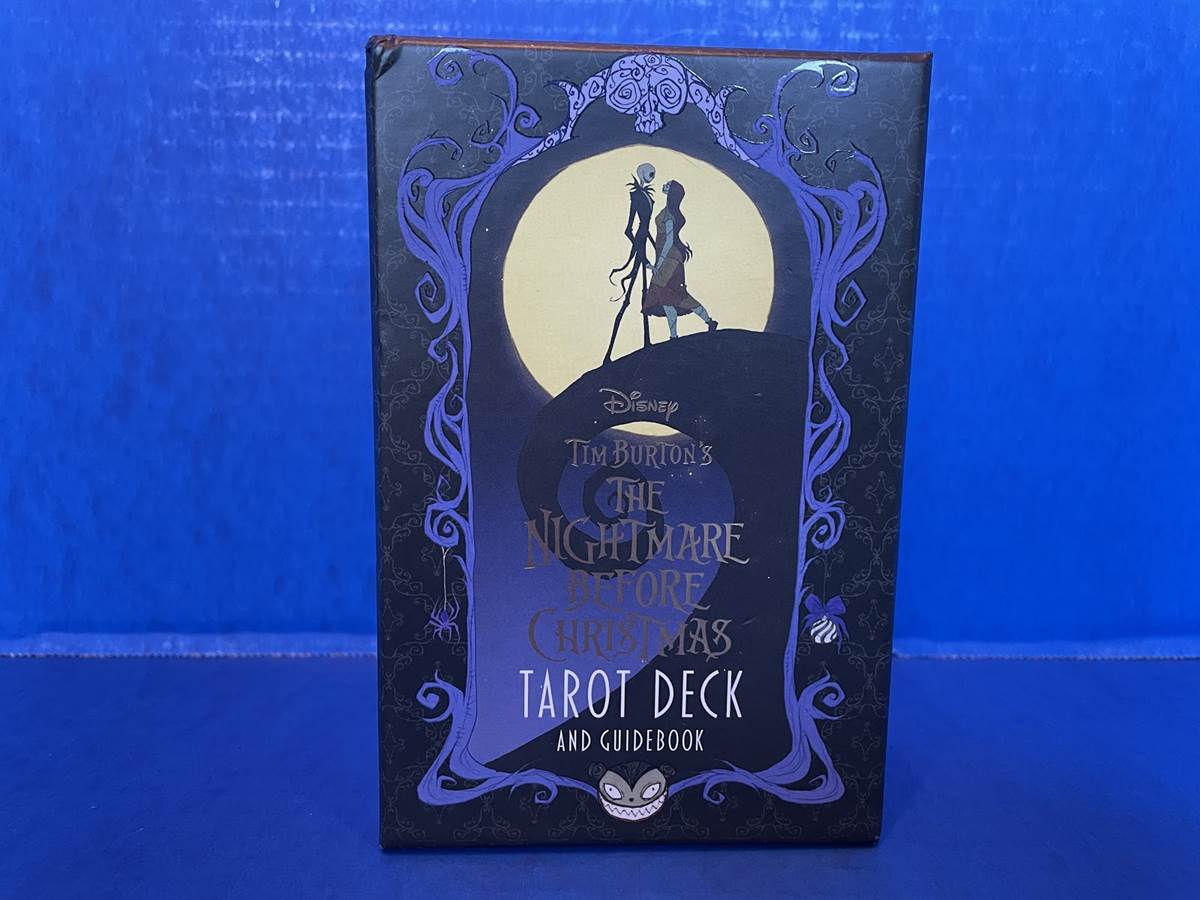 Have you ever had your future told? I have, and I paid a lot more for it than the price of The Nightmare Before Christmas Tarot Card and Guidebook, which gives you the power to do it yourself with theming from one the most beloved films of our time. As any The Nightmare Before Christmas fan will tell you, there’s no wrong time to enjoy the classic and these cards help extend your fandom year-round. 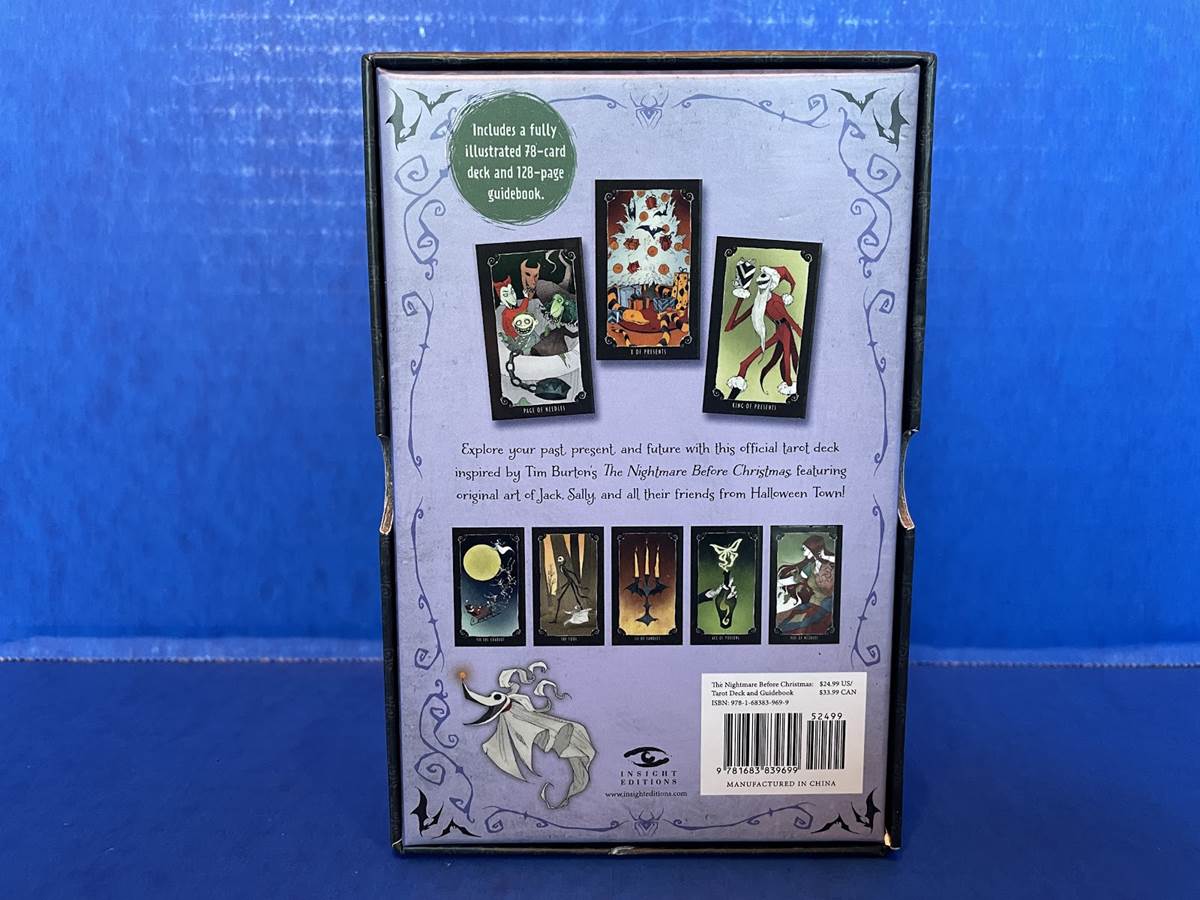 The handsome chipboard box from Insight Editions gives fans a taste of the incredible artwork on each card that can be found within. Whether you’re interested in playing with the cards or just collecting them, this is a very handsome presentation. The book is slightly bigger than the actual cards, which are much taller than your typical playing card deck. 78 cards are included, starting with 22 Major Arcana. If you’re familiar with tarot cards, these are branded with characters from Halloween Town (and a few from Christmas Town), but still largely served the same purpose. Within the book, each of these cards get a full-page of artwork, a description, and its meaning depending on if it was placed down upright or reversed. 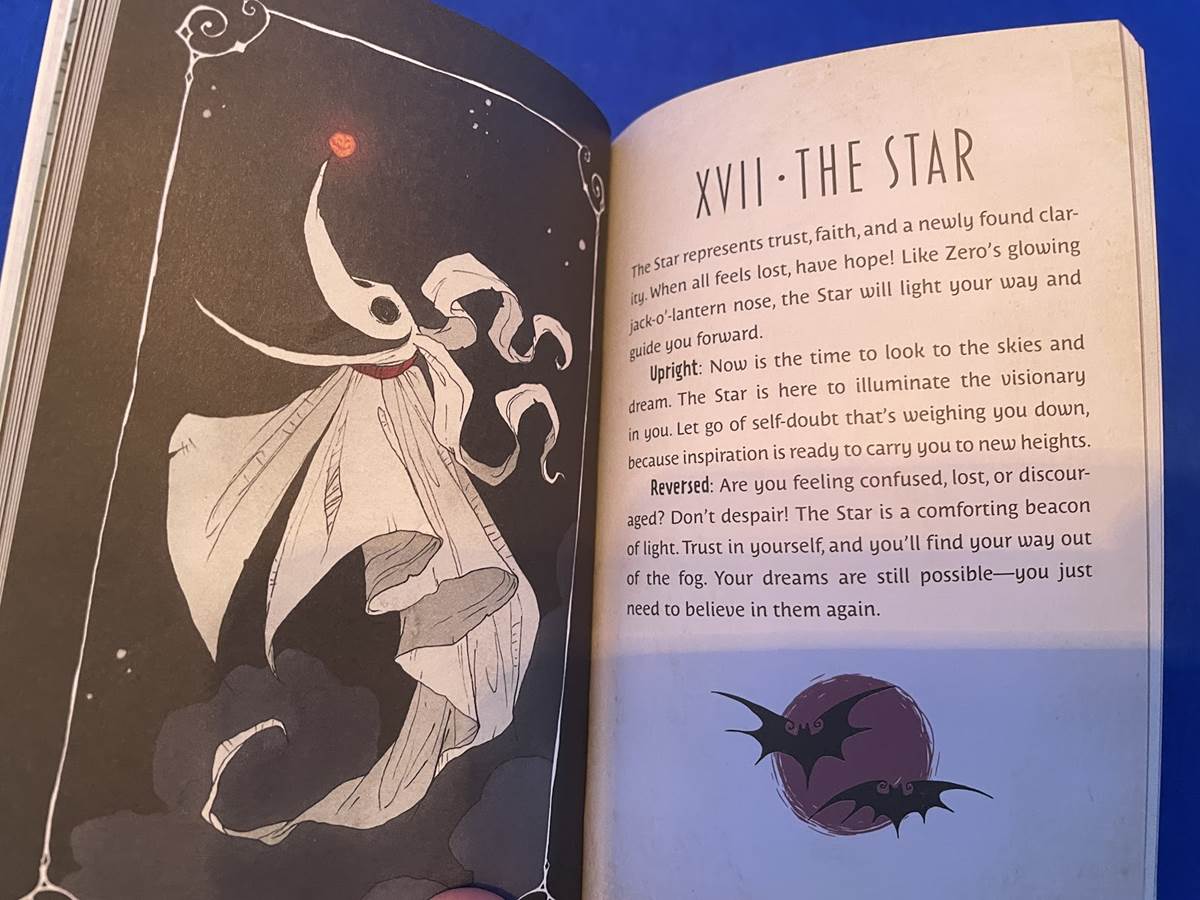 The items of the Minor Arcana have been tweaked to fit the film with candles, presents, needles and potions replacing cups, wands, swords and pentacles. The back of the cards are decorated in a traditional pattern but with Tim Burton style lines and purple and black colors. 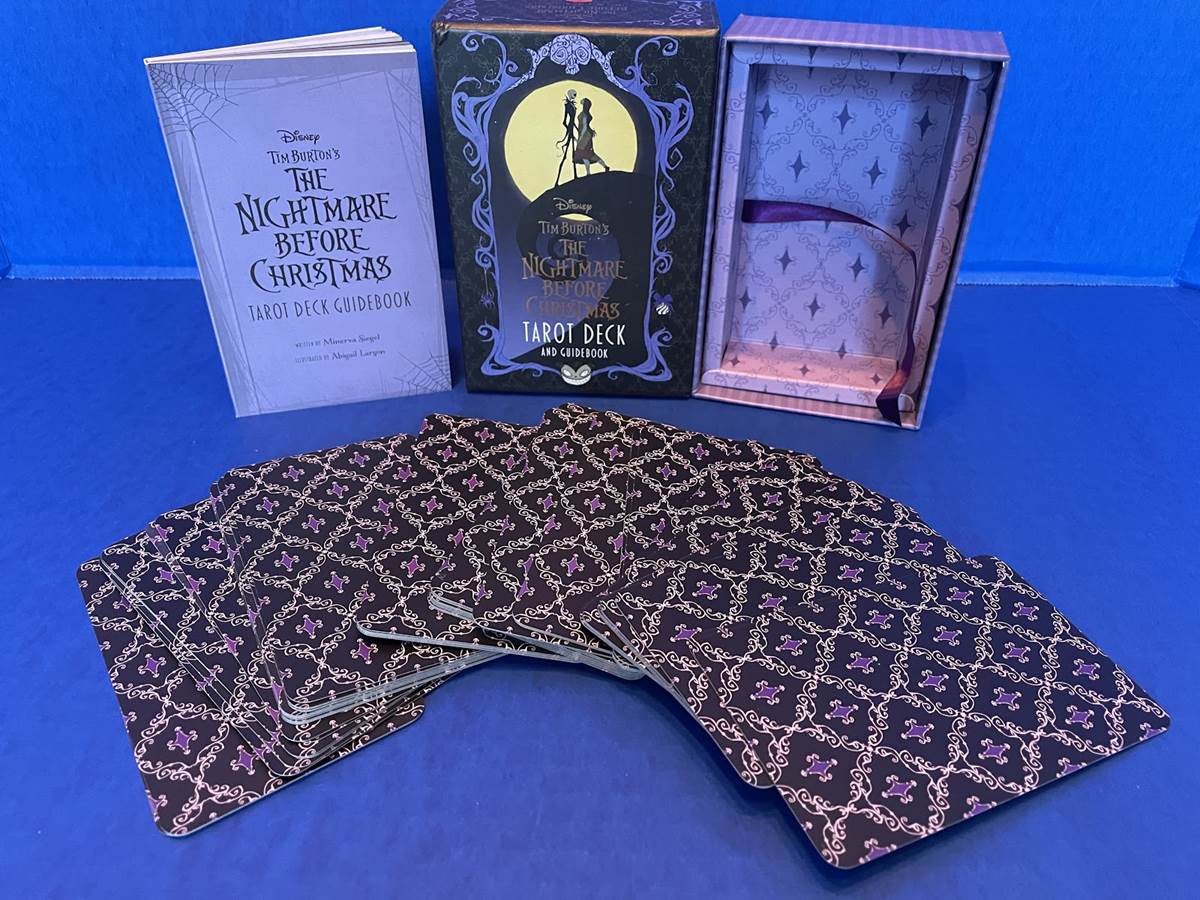 The last section of the book is all about how to read the cards with three ways to draw them: “Eureka,” “A Peek Behind the Cyclops’ Eye,” and “Blown to Smithereens,” a 4-card arrangement that I chose to have more options. 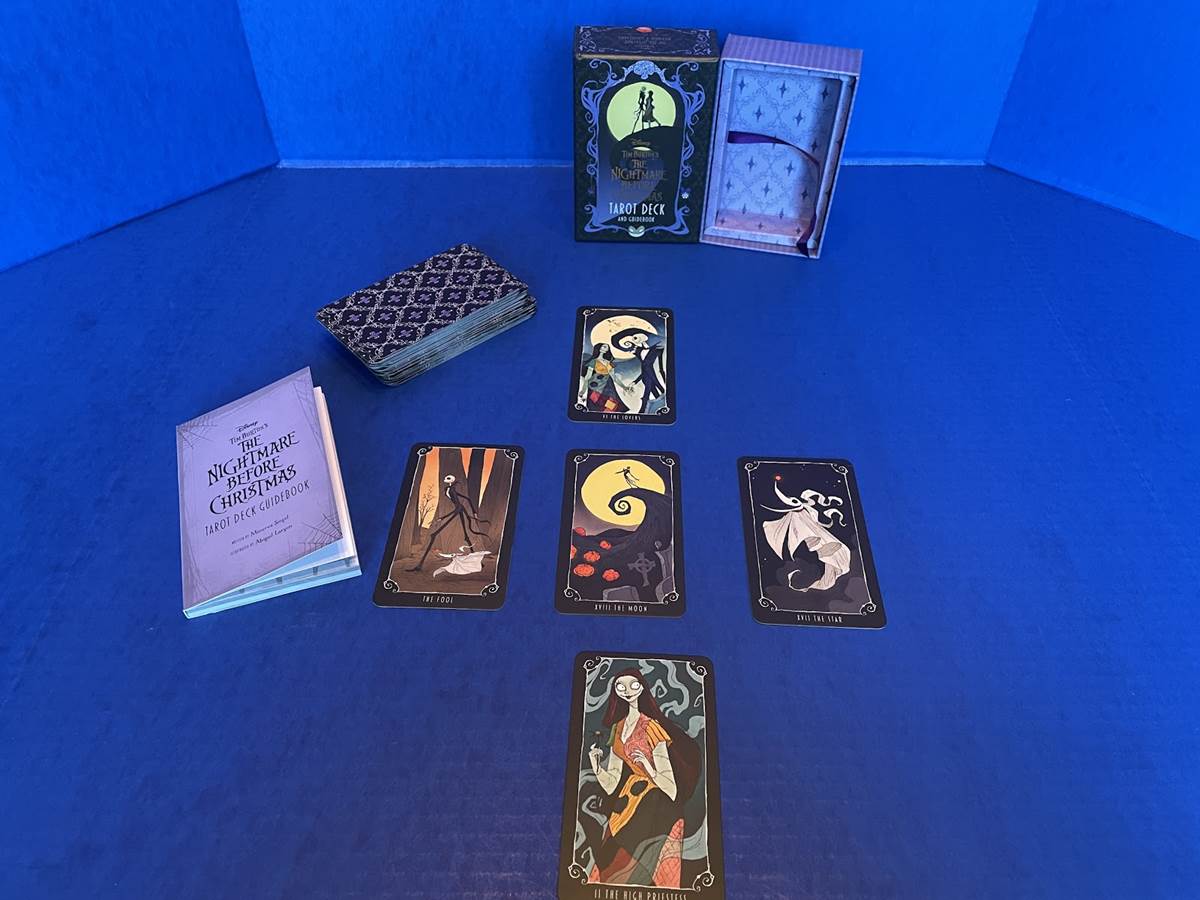 The above photo is one I arranged to show off some of the most well-known characters from The Nightmare Before Christmas in the deck, but the real draw I made after shuffling was this. 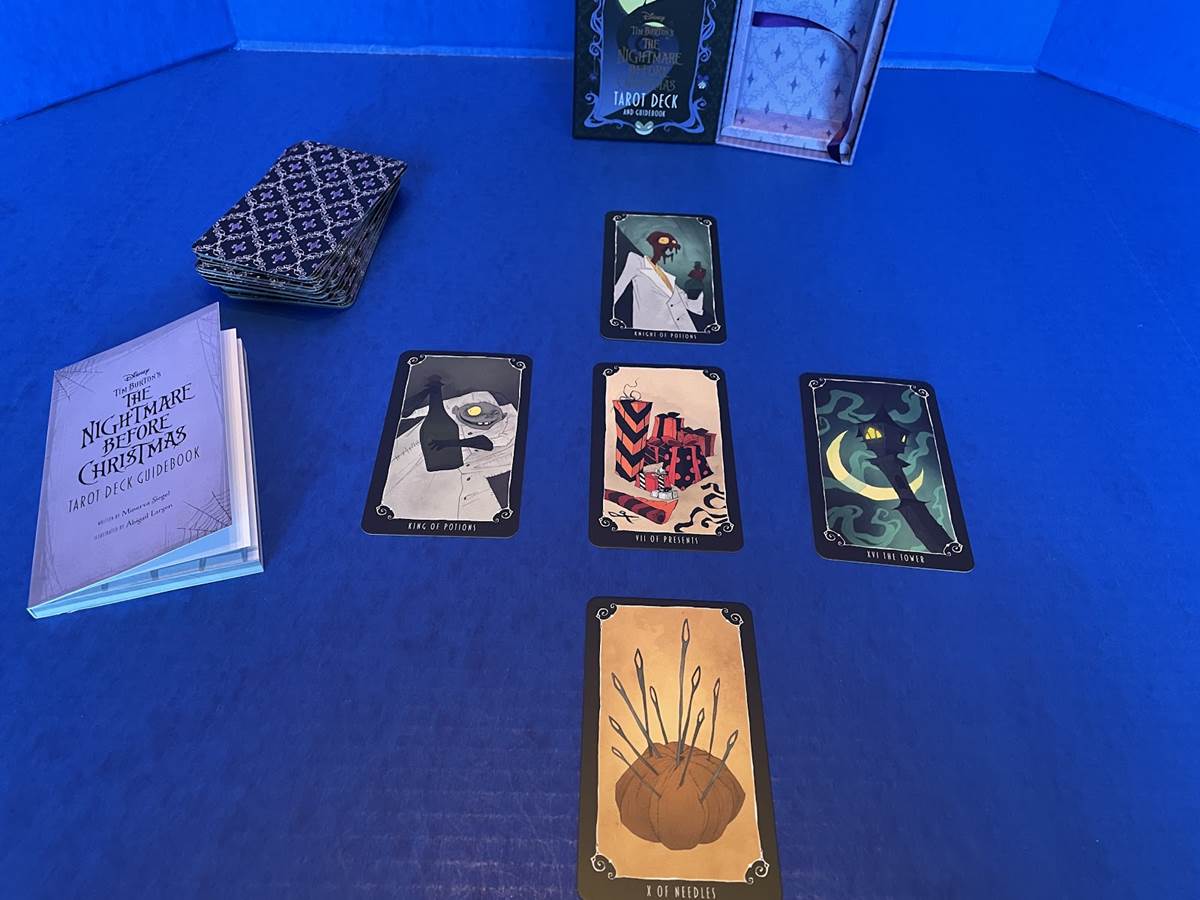 Before you draw the cards, you ask a question. Once they’re laid out in this order, you go through the book to decipher the answer to the question you asked. This book and card set is extremely handsome and if you’re interested in tarot cards, it’s a nice way to combine your fandom with another interest. Video: Ring in 2022 with the First Performance of Magic Kingdom’s Fantasy in the Sky New Year’s Eve Fireworks
Could a New “Giga Coaster” Be Coming to Knott’s Berry Farm?
TV Recap: “Queens” Sees the Girls Adjusting to a Member’s Absence in “Bars”
2021 Disney Person of the Year: Ken Potrock
Ring in the New Year by Timing Up These 5 MCU Moments to the Stroke of Midnight