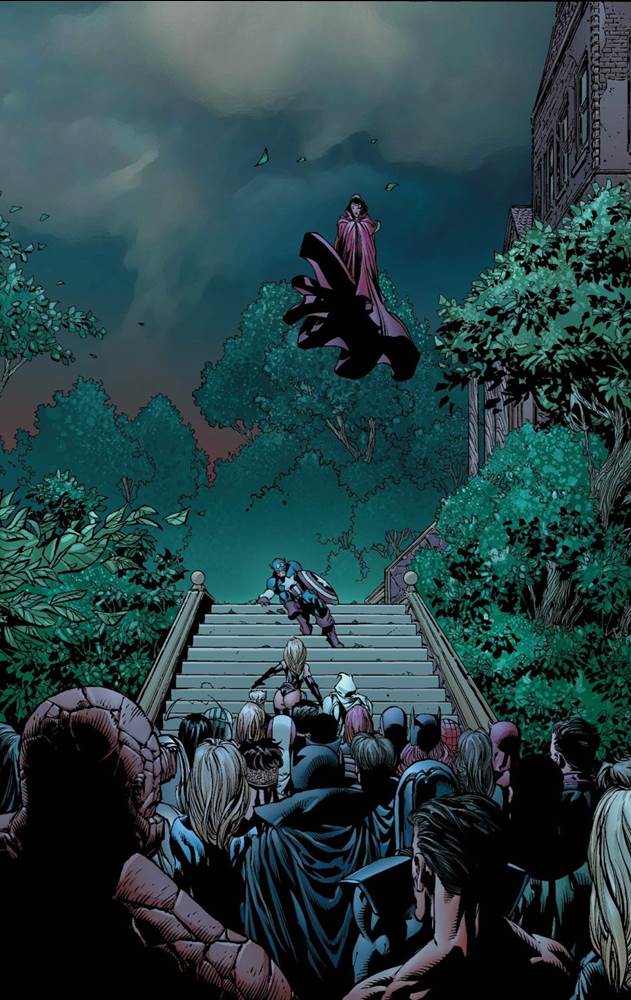 With WandaVision debuting today on Disney+, I figured there was no better time thant to highlight one of my favorite panels featuring the Scarlet Witch herself. The “Avengers: Disassembled” story arc sees Wanda drastically and negatively impacting our reality while creating her own.

Naturally, that leads the heroes to investigate just what’s going on with their old friend and, even more naturally, Captain America leads the charge. Cap tries to reason with the former Avenger, who is so lost in her own made up world that she’s barely even the same person. The result is nearly catastrophic.

Cap is telekinetically thrown from the building, landing on the steps in front of the other Avengers. When Wanda follows him out, we get this incredible shot of her hovering over a fallen Cap as the other heroes look on. It’s the pivotal panel in a classic Avengers story arc, creating not only an incredibly important moment in the story, but also some amazing artwork featuring so many great characters. To this point, the “King in Black” crossover event has been a bleak, helpless adventure for our heroes as the god of the symbiotes has trapped the planet and wiped out anyone who has stood in his way. But that doesn’t mean there haven’t been some really fun moments along the way!

“King in Black: Thunderbolts #1” sees a brand new iteration of the team formed with a specific mission in mind that could potentially turn the tides in this fight against Knull. The team is specifically chosen to handle symbiotes and clearly not for their ability to work well with others. The result is a hilarious romp with some ridiculous super villains fighting for survival in the streets of New York.

This panel perfectly captures all the hectic energy of this issue and complete lack of coordination put forth by this team of characters. The team drops like flies, with a symbiote dragon quickly eating one of them and their immediate reaction can best be described as panic. The matter-of-fact way in which they handle their teammate’s death is also quite hilarious.

You can check out “King in Black: Thunderbolts #1” now.