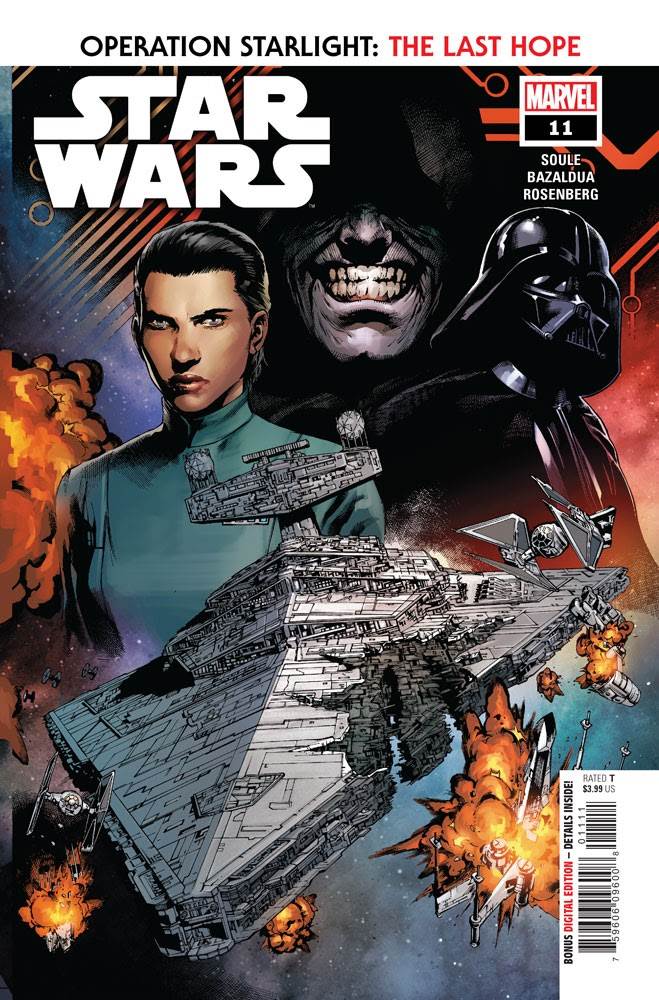 Two deadly standoffs break out in Star Wars #11, which came out today from Marvel Comics. First, Lando Calrissian demands that Kes Dameron (Poe’s father), Princess Leia Organa, and C-3PO release his friend Lobot, who is in danger of having his cyborg brain fried by the ancient droid they’re using to create a new rebel code.

Meanwhile across the galaxy, Starlight Squadron (comprised of Kes’s wife Shara Bey and trusty pilot Wedge Antilles, among others) is cornered by an Imperial Star Destroyer and forced to switch to offensive maneuvers before it can escape back to the rest of the fleet. 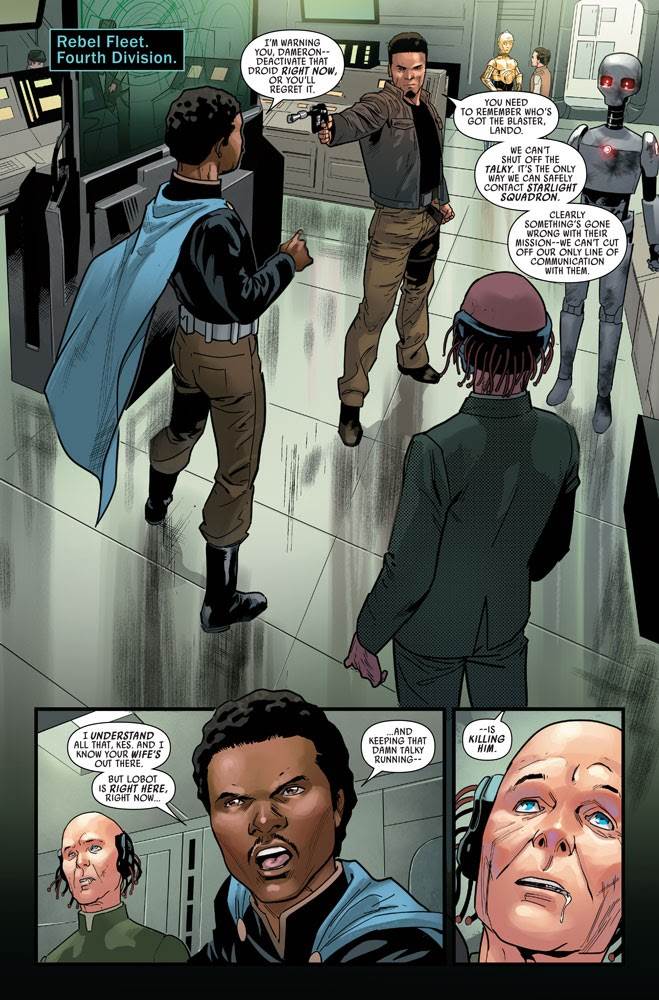 Tensions run high in both simultaneous conflicts, and we start to understand why the Lando of this timeframe (set between the events of The Empire Strikes Back and Return of the Jedi) is more willing to betray the rebellion than he is later on. The showdown between him and Dameron comes to blows with Lobot’s life hanging in the balance as Leia desperately tries to reach out to Starlight Squadron via Threepio. Trapped in the Star Destroyer’s hangar bay, Wedge, Shara, and the Duros L’ulo L’ampar come up with a plan to use the Empire’s own tech against them, while the devious Commander Zahra barks orders from the capital ship’s bridge. The characters of Darth Vader and Emperor Palpatine, both pictured on this issue’s cover, sadly do not appear in the story. 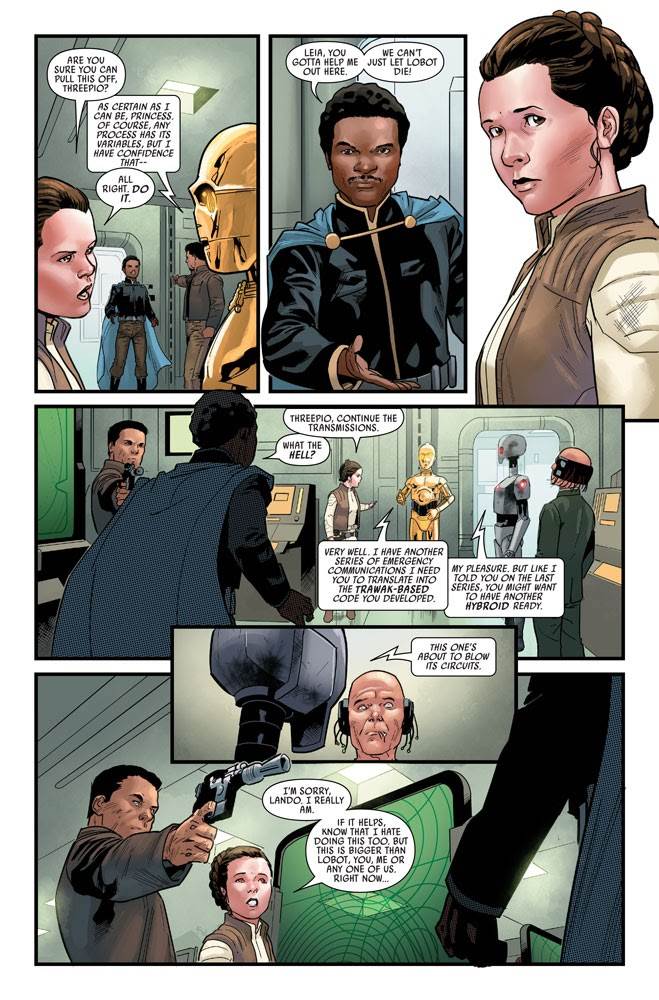 This issue (subtitled “Operation Starlight: Part III – The Last Hope) ends with a cliffhanger about Shara Bey’s condition among the Imperials, Lando making an underhanded promise to Jabba the Hutt’s majordomo Bib Fortuna, and Leia gaining a modicum of renewed hope thanks to a captured astromech droid with memory banks full of the Empire’s navigational data. Kes is distraught, of course, but Leia urges him to stay strong, promising “your wife’s one of the toughest people I’ve ever met.” This felt like a stepping-stone issue, with writer Charles Soule bridging the gaps between bigger plot points and putting the pieces in position for further adventures down the line, but it also has some good action and a lot of terrific dialogue from both well-established and more recently introduced characters. I’m most curious to see how Leia will eventually win over Lando again, as we know he’s certainly back in the Alliance’s good graces by the time they get to Endor. Could we see the Battle of Taanab in this run? I feel like it might be likely, but at the same time we never saw the gang run into a bounty hunter at Ord Mantell last time around, so I’ll try not to get my hopes up too high. 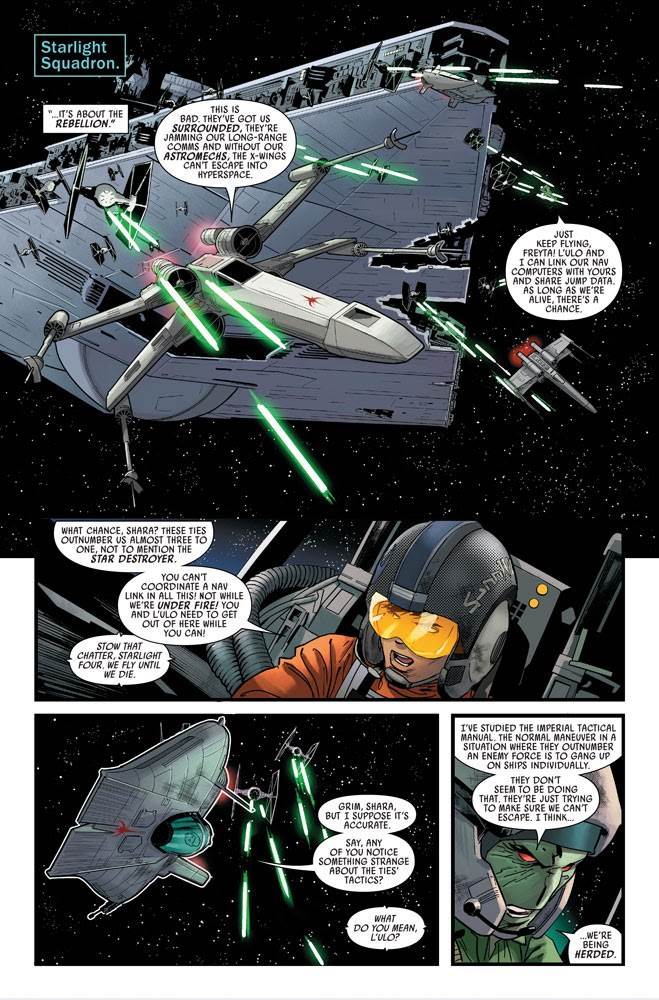 Star Wars #11 is available now wherever comic books are sold.