Ron Husband, the first Black Animator at Walt Disney Animation Studios, joined the Walt Disney Family Museum on February 17th as part of their “Happily Ever After Hours” virtual event series. Having been trained by Disney Legend Frank Thomas, Ron Husband regaled Disney Animation fans with stories of his early days at the studio and the timeless characters he helped bring to life. Here are 10 things we learned from Ron Husband. 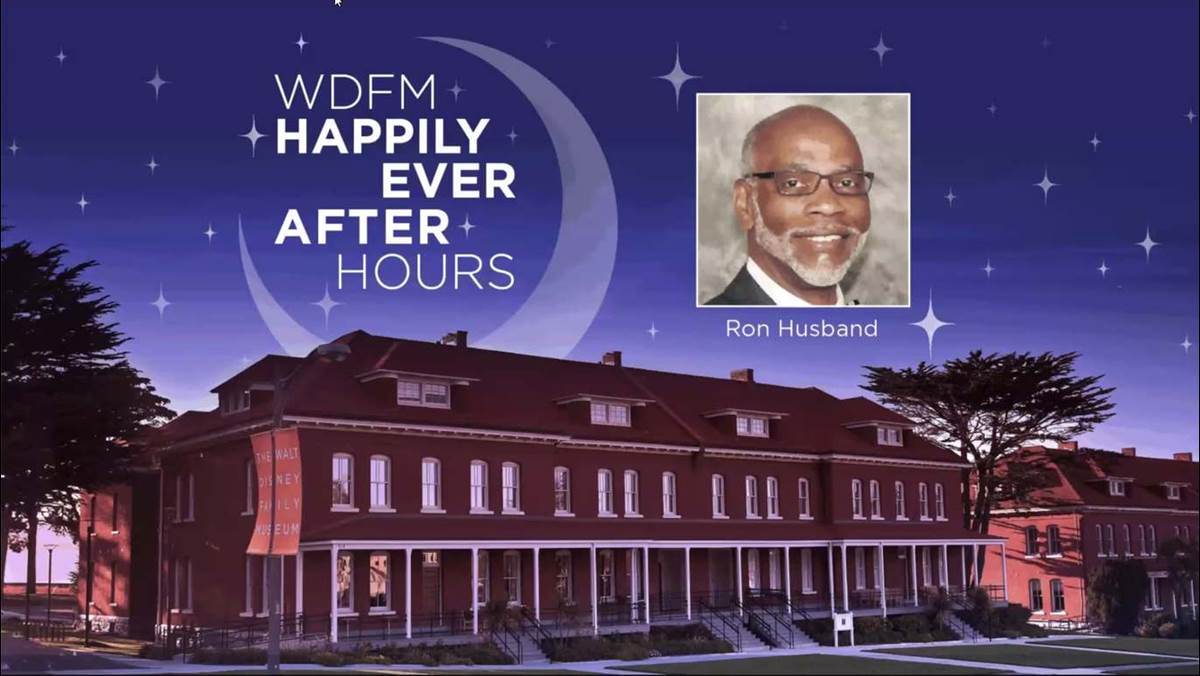 1. He Didn’t Dream of Becoming an Animator

Unlike a lot of his colleagues who studied at CalArts, Ron Husband hadn’t considered a career in animation when he applied for Disney’s trainee program. “I had been blessed with the ability to draw,” he shared, explaining that his career ambitions were to become a commercial illustrator and artist. Wanting to stay in Southern California where he grew up and with a wife and kids to support, Ron took a job as a technical illustrator creating diagrams and flowcharts. The job put food on the table, but didn’t meet his creative needs. While taking classes at the Art Center in L.A., one of his instructors, Disney Legend and Imagineer Sam McKim, told his students about a Disney trainee program that none of Ron’s classmates were interested in due to Disney’s reputation for not paying well. He took Sam McKim’s advice, applying for the program.

2. His Quick Sketches Got Him Hired at Disney

Because Ron Husband had his sights set on a commercial artist career, the portfolio he first reviewed with Eric Larson, head of Disney Animation’s trainee program, didn’t include any quick sketches. At the advice of a high school art teacher, Ron had been quick sketching for years and at Larson’s request, Ron sent a few of his books in. He soon got the call, taking a decrease in pay to leave his technical artist job to start as a trainee at Disney Animation with no guarantee of permanent employment. Having no experience in animation, the review committee that looked at his animation tests at the end of the four-week trial period extended him until he was placed in a pool of in-betweeners that supervising animators could select from. He was chosen by Disney Legend Frank Thomas, who Ron Husband considers to have had the biggest influence on his animation career.

3. Glen Keane Was His First Officemate

Having arrived at the studio six-months before Ron Husband was hired in 1975, CalArts alumni Glen Keane was in-betweening for Ollie Johnston. When Ron Husband was chosen by Frank Thomas, he found himself working side-by-side with Glen in an office near the legendary animation duo’s offices on Disney’s studio lot. The linoleum connecting Frank and Ollie’s offices is reported to have been more worn than anywhere else in the studio due to the amount of time the two spent going back and forth to talk to each other. Ron Husband recalls the date he started working with Glen Kean, February 10th, 1975, and they’ve been friends ever since. Although Ron Husband doesn’t have an animation credit on The Rescuers, Frank Thomas gave him 51-feet of animation to do in his free time as a learning opportunity. “I learned a lot just from his work ethic, how he planned out a scene and his drawing.”

4. Somebody Told Him He Would Never Be an Animator At Disney

After a 38-year career with Disney, most of which was spent as an animator and supervising animator, it’s hard to believe that Ron Husband met resistance in his early years. He recalled being told by a higher up at the studio that he would never be an animator. Having no control over the situation, Ron Husband committed to doing his job as an in-betweener to the best of his ability. In the end, he became the first African American with an animation credit on a Disney production in 1978 on The Small One.

5. Don Hahn Helped Him Get His Book Published

Quick Sketching with Ron Husband combines all of the animator’s keys to success. “I’m not the best artist in the world by a long shot, but I practice the basics,” he shared about the teachings aspiring artists can find in his book. Having written it, Ron Husband was looking for a publisher. The answer came through Don Hahn, who had published several books through CRC Press. “If you’re doing anything, if you wanna be good at it, you’ve gotta practice,” Husband shared, his book giving readers all the principles of quick sketching they need to brush up on. “Quick sketching allows you to see those things quickly,” he shared, adding that a quick sketch is typically done in under 60-seconds. “The emphasis is on quick.”

6. The 90s Renaissance Didn’t Feel Different At the Time

“Looking back, you can sort of see the trajectory,” Ron Husband shared when asked if working through Disney’s Renaissance felt different than being at the studio in the 1970’s and ‘80’s. “At the time, you’re getting paid to do your job.” With tight deadlines and a hive mentality of getting the job done, working on films like The Little Mermaid, Beauty and the Beast and The Lion King didn’t feel that different from working on The Black Cauldron, The Great Mouse Detective and Oliver & Company. “There was hardly time to look back on the success of your movie because by the time it gets released, you’re 8 or 9 months into the next movie you’re working on and there’s no guarantee it’s going to be a success in theaters.”

7. Disneyland Helped Him Create Djali for The Hunchback of Notre Dame

“One of the great things I appreciated with Disney was the time they gave you to do your research and I researched goats,” he joked about his first assignment as a Supervising Animator. Taking a day away from the office, Ron Husband spent hours at Big Thunder Ranch in Disneyland to observe goats in the park’s petting zoo. He got to see how they move, how they feel, and get a better understanding of their musculature. Djali didn’t initially have much screen time, but test audiences loved him so much that the filmmakers ended up doubling the size of his part.

The directors of the “Firebird Suite” segment of Fantasia 2000 had a specific type of Elk in mind, one that isn’t native to California. As a result, Ron Husband found himself in the coldest climates of his life on a winter trip to Montana to visit a farm where he could observe them. A fun fact about the character is that the antlers were actually computer animated and then those were drawn over by hand to give them a hand-drawn look in the finished short.

9. He Animated Disney’s First Black Character in an Animated Film

For Atlantis: The Lost Empire, Ron Husband was given his choice of being the Supervising Animator on any character he wanted, with the exception of Milo Thatch, who was already assigned. Having a hard time deciding, it was Don Hahn who suggested that he take Doctor Sweet, which felt right to Ron Husband. He based the character on actor Woody Strode, but also got to research turn-of-the-century medical equipment, like a bonesaw. As part of his research, he contacted medical schools, including Howard University, who sent him scans of medical equipment catalogues from that time period to help him fill Dr. Sweet’s medical bag. The biggest challenge in animating the character was synching the lips to voice actor Phil Morris’ fast talking style.

10. He’s Now Teaching the Next Generation of Artists

Things have come full circle, with Ron Husband now teaching at the Art Center in L.A., the same place he studied under Sam McKim, who recommended he apply for Disney’s training program. “You gotta know your craft,” he said when asked for his advice for aspiring artists, stressing the importance of understanding how to draw for any animator, including those who only use a computer.