Leading up to the VIEW Conference in October, the Torino, Italy-based event has been hosting virtual conversations with animation filmmakers. Today’s event featured the directors of Oscar contenders, including the filmmakers behind Pixar’s Soul and Onward, in addition to Disney Legend Glen Keane and his Glen Keane Productions animated feature Over the Moon. With more streaming giants acquiring and producing their own animated content, the 2-hour event also included filmmakers from Dreamworks (Trolls World Tour and The Croods: A New Age), Cartoon Saloon (Wolfwalkers), Netflix (The Willoughbys), and Aardman (A Shaun the Sheep Movie: Farmageddon). There’s a lot of contenders for the Best Animated Feature category this year. Here’s a recap of the event from the perspective of a lifelong Disney fan. 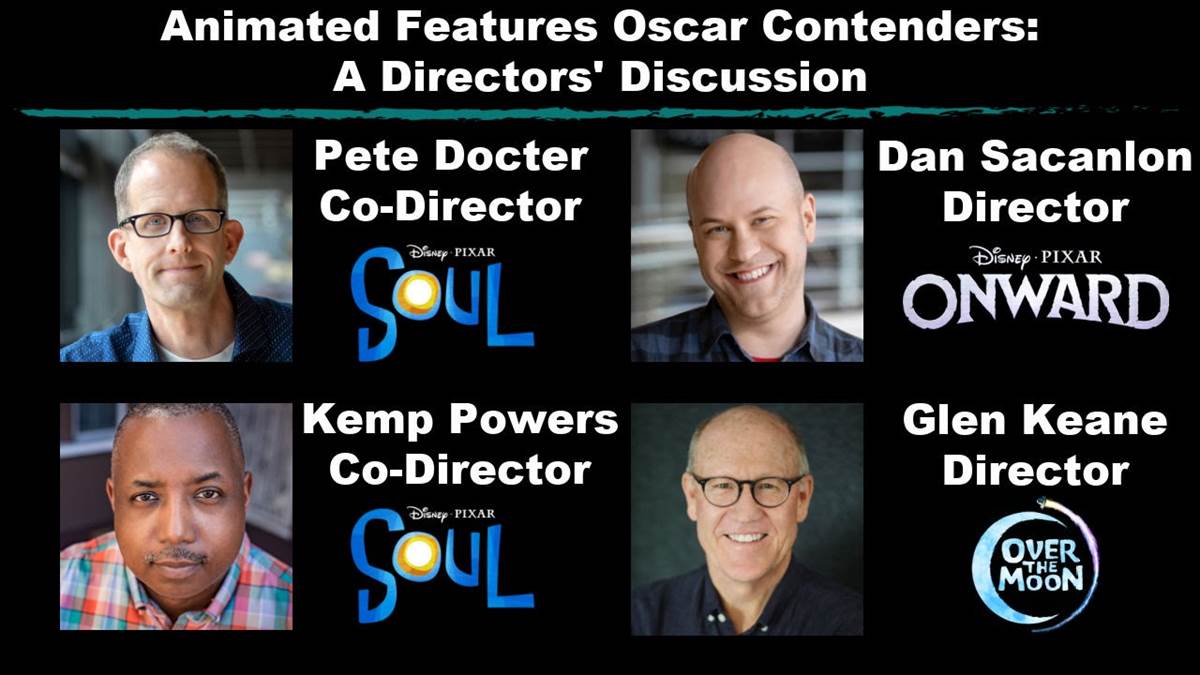 With a supportive and collaborative spirit, nearly all of the filmmakers involved in the panel were united by their shared love of Bugs Bunny, whom many revealed to be their favorite animated character of all time, or the one that inspired them to get into the business. “I would probably go Bugs Bunny because he can get away with stuff that I wish I could,” Pixar Chief Creative Officer and Soul Co-Director Pete Docter shared. “Plus he’s really well animated.” Dan Scanlon, director of Onward, would’ve chosen Bugs Bunny, too, but gave an additional answer. “For a modern one, I would say Tina from Bob’s Burgers is a pretty amazing character.”

Glen Keane, who’s been animating since the 1970’s, found it hard to give as simple of an answer. “I have to set aside characters I’ve animated because living in the characters, I have so many joyous moments to think back on from Ariel and Beast and Tarzan and all those,” he shared, revealing that he loves Frédéric Back’s Oscar-winning short The Man Who Planted Trees. “But then there’s Peter Pan, just because I always have these flying dreams… I just think that’s the coolest thing and Milt Khal’s animation is phenomenal.” Another popular answer from the group was Baloo from The Jungle Book, put forward by both Ross Stewart (Wolfwalkers) and Richard Phelan (A Shaun the Sheep Movie: Farmageddon), with Joel Crawford (The Croods: A New Age) crediting Thumper from Bambi as his “Aha” animation moment, while Homer Simpson is another favorite character of his.

The conversation primarily dealt with the films the directors most recently made and the animation business as a whole. We’ve widely covered the backstories of Soul, Onward and Over the Moon at Laughing Place (click each link for more information), but there were still some behind the scenes reveals at the event. I’ve grouped them by each film for ease of reading, followed by highlights from the conversation about the future of the animation industry as a whole.

With Onward, Dan Scanlon revealed that the process of developing the story revealed to himself that his older brother filled the role of a father in his life. “The movie became me not only telling my brother that, but thanking him for it.” While the story evolved over the course of its development, the ending scene stayed consistent from the beginning. The journey to get to the ending was designed to make it as meaningful as possible for audiences.

On that same theme, Dan Scanlon kept the big ending of Onward a secret from his own brother until the film was completed. “I think I broke him because he tells me all the time that he loves me and he’s proud of me and he’s watched the movie 20 times,” the director shared. “The license plate on his car is Guinevere now. He has a life-size standee from the movie theater… I know these are million dollar investments, but it’s kind of awesome that my brother liked it that much.”

Although Pete Docter and Kemp Powers worked together to bring Soul to audiences, they both had a different opinion on which scene was the most challenging. For Pete, the scene where Joe Gardner plays his big show with Dorothea Williams and arrives back at his apartment feeling unchanged was hard to convey. Removing items that 22 collected from his pockets, he sits at his piano to play his life’s story with new understanding. “I think a lot of us experienced this during the pandemic,” he explained about the feelings conveyed in the sequence. “There’s so many things that we took for granted that when you don’t have them anymore, you realize that’s what makes life worth living.”

For Kemp Powers, the scene that was the most difficult to get right involved a character with an important role, but not a lot of screentime. “Dez is someone that Joe would describe as a friend, someone he knows quite well, but during the [Barbershop] scene, he comes to realize he doesn’t know anything about this man.” Voiced by Donnell Rawlings, 22 asks Joe’s barber Dez about his past and Joe listens for the first time. “It reveals to Joe a new way of looking at life. He believes that everyone is born with a purpose.” In the scene, Joe finds out that Dez’s life’s dream wasn’t to be a barber. “It was a sequence that I think we rewrote the most times in the entire film because it always worked from a comedic standpoint, but it had to really take our character forward.”

The response to Soul has been overwhelmingly positive, but Kemp Powers shared that there are differences of opinion when it comes to making progress towards better representation in animation. “There was an editorial in The New Yorker that said everything about Soul was racist,” he shared. “The most laughable part of it is that some of the scenes the writer pointed out as being particularly racist were my ideas.” With most of the feedback being positive, including being thanked by strangers for working on the film, it’s hard to stay down. “I can laugh about it only because of that counterpoint.” He added that because of animation’s troubled history with portraying people of color over the course of decades, he believes there’s an audience that will continually be looking for misrepresentation, something that will only get better with time through more diversity and representation in animation.

“I really resisted being a director for as long as I possibly could because I absolutely just love animating,” Glen Keane revealed about Over the Moon, the first full-length animated feature he’s directed. Now as the head of his own animation studio, working in collaboration with China’s Pearl Studio, the experience of making a film based on a fable that’s more popular in Asian cultures than Santa Claus not only opened the Disney Legend up to a new culture, but also what it means for it to be represented in a worldwide film. “Again and again, we heard from so many people that it was so encouraging that they are being represented up on the screen and being valued… Things like that really touched me.”

Having spent so much time at Walt Disney Animation Studios, Glen Keane brought along some of his Disney storytelling expertise to the project, particularly the film’s emotional ending. “It’s one of those moments that makes you cry,” he explained. “It’s like The Little Mermaid when Ariel says ‘I love you, daddy.’ It’s like pushing the cry button. I felt that.” Adjusting the film’s emotional final scene was difficult, as it meant getting rid of some of screenwriter Audrey Wells’ dialogue. Knowing she wouldn’t live to see the finished film, Wells approached writing Over the Moon as a goodbye letter to her own daughter with a story about how a child moves on after the loss of a parent. But ultimately, the scene had to serve the film and what Glen Keane found worked best was to transform it into a small, quiet moment instead.

The Future of Animation

After all 10 directors answered questions about their 8 films (Gitanjali Rao, director of Bombay Rose, was scheduled to participate but couldn’t make it), the conversation shifted to the future of animation and tips for aspiring directors. Gitanjali would have been the lone female director in the category had she been present, and she and Kemp Powers also would’ve been the only people of color on the panel. “Animated films are like big gigantic ocean liners, they don’t turn on a dime,” Glen Keane explained. “You’re looking at 3 or 4 years in the past. This image will look much different in future years.”

As the Chief Creative Officer of Pixar Animation Studios, Pete Docter has more control over diversifying the opportunities given to filmmakers than anyone else on the panel. It’s something Pixar has already taken steps towards, not only through the Pixar SparkShorts program (which was the subject of the previous VIEW event), but with feature films already in production. “We have 3, 4 films that are women directed,” he revealed. “There’s a lot more diversity coming up.”

Pete Docter and Kemp Powers both reflected back on the lack of diversity in their higher learning classes decades ago compared to what they see now when they speak at schools. For Pete Docter, who was taught by Glen Keane at CalArts, he shared that out of his class of 45 students, there were only 4 women. Today, the gender split in animated classes are 60% in favor of women. Kemp Powers took his screenwriting classes at the University of Michigan in the early 2000’s where he confessed to being the only Black person in the class and only 2 of his classmates were female. When he spoke to that same class recently, 60% of the class was made up of women and 20% of the class was people of color.

Adding to the conversation, Kemp Powers stressed the importance of informing women and people of color that these opportunities exist. In the case of animation directing, there’s also not a clear path on how to get there. He revealed that as a writer, he didn’t think he would be given an opportunity to direct an animated feature. “Even at Pixar, Lee Unkrich was an editor. You wouldn’t think of editing as being a path to being an animation director.” The bottom line is that directing is about being a passionate storyteller, one of the most important qualifications for the job.

With streaming services competing for animated content, there are more opportunities than ever for diverse filmmakers to get their content in front of an audience. In terms of where aspiring filmmakers can get their start, Dan Scanlon shared that it’s easier than ever before. “Now that we have the internet and YouTube, you could make a 30-second animated short and put it out there and it could be huge.” He also shared that filmmakers don’t have to start with animation, with live-action shorts being quicker to tell. “The other advice I’ve heard is live a life, have an experience… It’s not just watching movies and drawing all day, you’ve also gotta get out there and have some experiences to pull from.”

Whether you’re going into animation or not, Glen Keane’s advice to future filmmakers felt pretty universal to all human beings in their own pursuit of happiness: “Know what your strength is and if your path is different than everybody elses, that’s okay.”

Visit VIEWConference.it to learn more about upcoming virtual events like this one, which was free to attend.