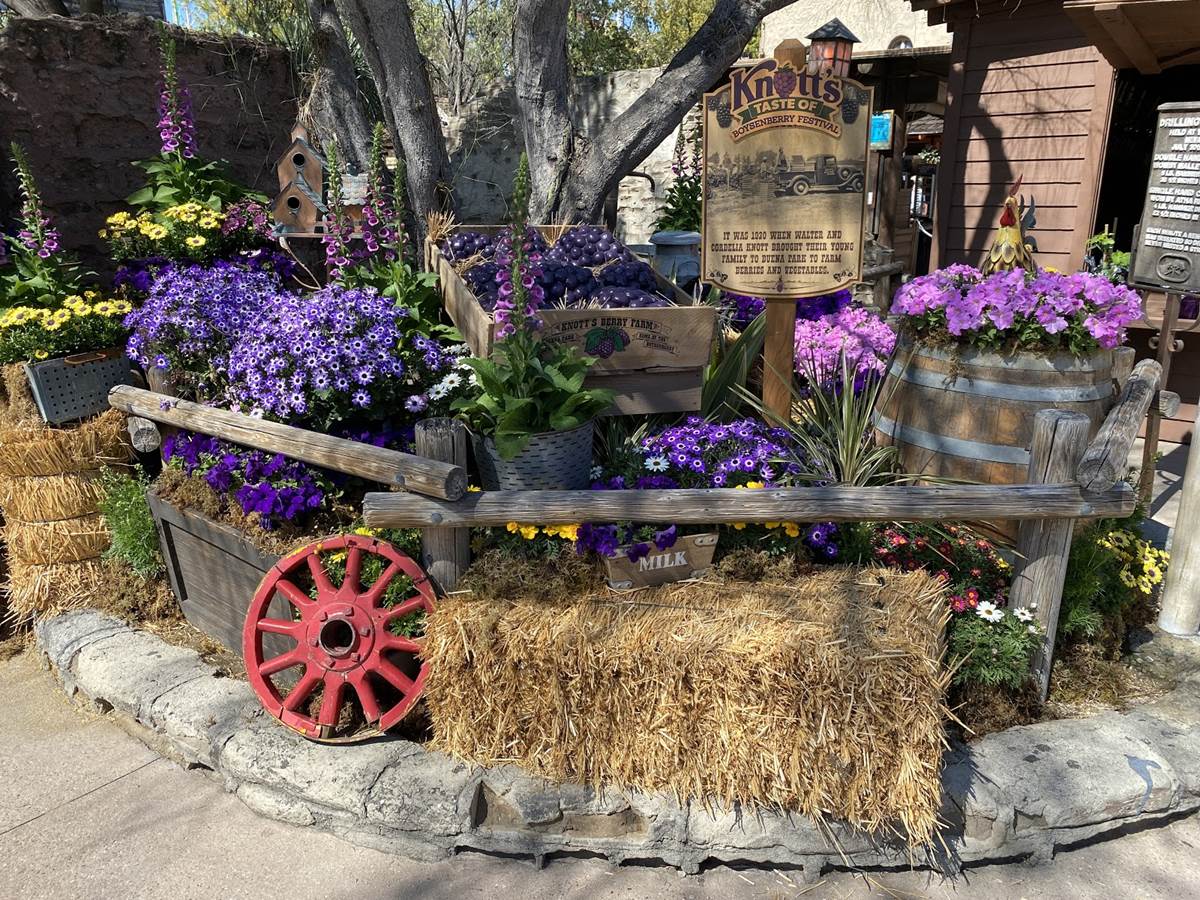 Knott’s Taste of Boysenberry Festival launched this past weekend at Knott’s Berry Farm in Buena Park, California, and while it may contain a more restrained amount of activities compared to Boysenberry Festivals of years past (none of Knott’s many rides are currently available to guests and the live shows and character interactions are more limited due to social distancing), it’s still a tremendous amount of fun and I highly recommend the event to all Southern California theme park fans.

We spent a good eight hours exploring Taste of Boysenberry Festival at Knott’s Berry Farm on Friday, its opening day, and I brought back a sizeable amount of photos and video snippets from around the park as we tasted unique boysenberry delicacies, enjoyed live music, and mostly just appreciated our time in one of our absolute favorite Orange County destinations.

As we entered Knott’s Berry Farm, the first thing we noticed was how beautifully the Ghost Town area (AKA Calico) had been decorated for Taste of Boysenberry Festival. Knott’s has really stepped up its game in recent years in a number of areas, and park decor is definitely one of them. Plus, we were greeted by Calico’s Deputy Mayor Milton C. Howell (one of our favorite recurring Ghost Town Alive! characters) as he interacted with guests from the balcony of the Gold Trails Hotel.

Once inside, I broadcast a 45-minute live stream video from Knott’s Taste of Boysenberry Festival with the help and commentary of Laughing Place cofounder Doobie Moseley on the LP YouTube channel.

Upon entering, guests are handed a Knott’s Taste of Boysenberry Festival Tasting Card, which is included with the price of admission and allows adults access to five food or beverage items of their choosing from the event’s exhaustive boysenberry-themed menu.

Of course there’s a good selection of Knott’s Taste of Boysenberry Festival merchandise available as well, including hoodies, mugs, Snoopy plushes, and tote bags. Guests can even take home their own boysenberry plants, but the best value is still the t-shirt & pin combo, which gets you a nifty Snoopy shirt and an exclusive event pin.

Another fun physically distanced activity is the Egg-Citing Easter Egg Hunt, which sends guests around the entire park searching for specially decorated eggs that tie in with their surrounding environments in Ghost Town, Camp Snoopy, Fiesta Village, and the Boardwalk. The hunt leads to a fun family photo op with the Easter Bunny himself at the Charles M. Schulz Theater. Spoilers for the eggs’ locations lie in the following image gallery, so if you plan on following the cryptic clues at the park yourself, don’t look!

Speaking of Camp Snoopy, that section of Knott’s Berry Farm is already decorated with colorful eggs and rabbit-themed adornments for Easter. Plus guests can meet and have their photo taken with the Easter Beagle, AKA Snoopy, at the Camp Snoopy Theater.

Back in Ghost Town, we found several other characters interacting with guests from a safe distance on stages and from balconies and windows. Plus, the recently introduced KNOT Radio station made its return to the Boardwalk.

Nighttime may be the most beautiful time at Knott’s Taste of Boysenberry Festival, as after dark the park and its various attractions and areas are lit up in gorgeous purple hues.

But as predicted, my favorite part of Knott’s Taste of Boysenberry Festival was getting to see the return of Krazy Kirk and the Hillbillies (formerly Disneyland’s Billy Hill and the Hillbillies), who performed their toe-tappingly irreverent brand of country and bluegrass music live for the first time in over a year on the Calico Mine Stage. The band will be doing multiple shows each night of the festival, which is another wonderful reason to check out the event while it lasts.

In the embedded video below you can watch the full first set of Krazy Kirk and the Hillbillies’ return to Knott’s Berry Farm for Taste of Boysenberry Festival 2021 from Friday.

We enjoyed the band so much we return for one of their later sets further on in the evening. In the LP tweet below you can watch a clip of them covering the hauntingly beautiful song “Harvest Moon” by Neil Young.

Here are some additional photos I took of Krazy Kirk and the Hillbillies on Friday night.

We really enjoyed our time at Knott’s Taste of Boysenberry Festival, and it was great being back in Knott’s Berry Farm for the first time since late November. I hope this event and others like it in Southern California are indicative of a much busier, more enjoyable 2021 theme park season.

Knott’s Taste of Boysenberry Festival runs on select dates from now through Sunday, May 2. For more information and to purchase advance tickets, be sure to visit Knott’s Berry Farm’s official website.