Does Harper save her dad? Who’s haunting The Tremont? Where did the time traveling radios come from? The first season of Secrets of Sulphur Springs concludes with the 11th episode, “Time After Time,” now streaming on DisneyNow. If you’re a Descendants fan, you might also want to tune in to watch it on Disney Channel at 8/7c where it will be accompanied by some news about the future of the Descendants franchise. Here’s a recap of the explosive season finale, which also confirms that there’s another season coming because it all ends with a cliffhanger. 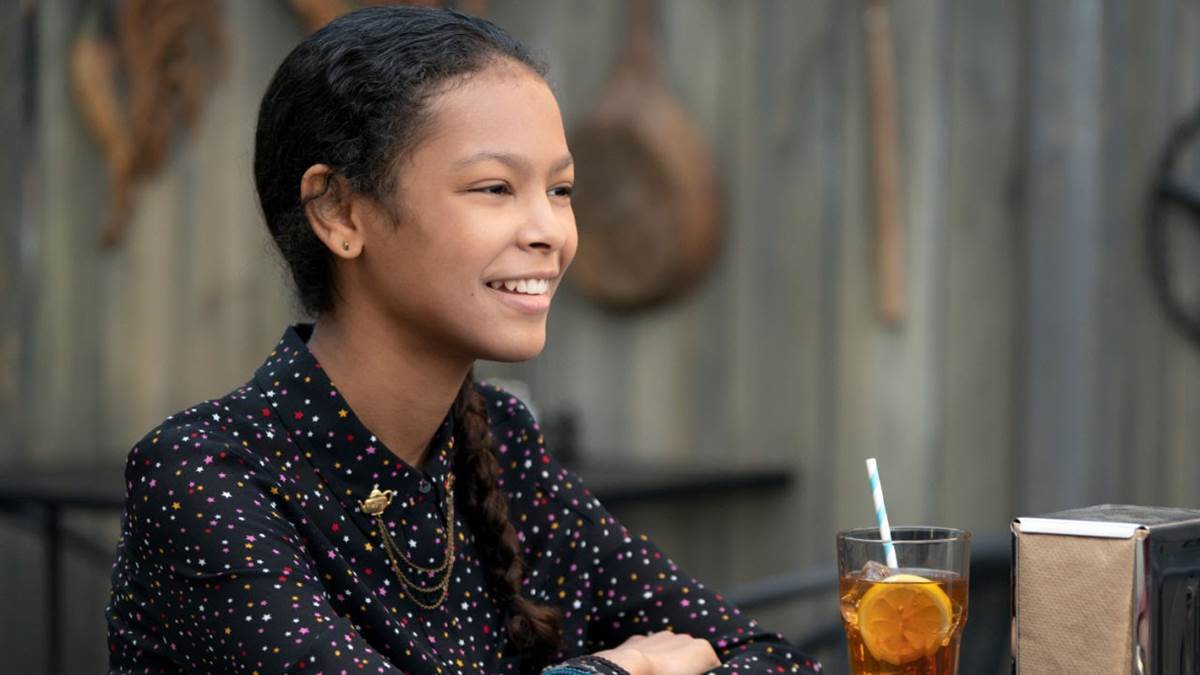 The episode starts in 2011 and Harper has flagged her dad Chris down. She makes up a story about her bike getting destroyed and asks for a ride. When he asks if her parents ever told her not to get in cars with strangers, she tells him she’s not a stranger and her family knows his wife Jess. She uses a combination of a family name and her previous Harry Potter alias, introducing herself as Marie Granger.

While riding in the car, she tells Chris to take Sugar Hill Road, hoping that will avoid the crash. He tells her that he drives around The Tremont every Sunday and that he worked there as a kid, which is how he met his wife. He then shares that the land was actually in his family for generations and it used to be a sugarcane farm. He hopes to buy The Tremont to keep it in the family and plans to sell his yellow GTO for the down payment. Just then, a truck swerves into their lane and they narrowly avoid the crash. As they turn down Sugar Hill Road, Harper thinks the worst is behind them.

Chris takes Harper to Jiffy, a cafe where they sit and have drinks before he heads back to his family, sharing that another Sunday tradition is having a picnic along the lake of The Tremont. “Harper’s my littler artist and Topher, he’s turning into the family comedian,” he tells Marie about his family. When Harper asks if The Tremont is haunted, he says “I’ve been through that whole hotel and didn’t find any ghost.” As he prepares to leave, Harper gives him a hug. “You remind me so much of my daughter,” he tells her.

In the present, Griffin and Ben play guitar together and Ben shows off his skills by playing the song that won him the talent contest at Camp Tremont. He makes the same mistakes he did then and when he confesses to not knowing how he won, Griffin says “Maybe they stuffed the ballot box.” Ben says he questioned that himself and then confesses to having dreamt about his time at camp last night, but he says Griffin was in his dream. “That’s weird,” Griffin replies, wondering if his dad’s dream was introducing him to the memories that he and Harper altered by time traveling. 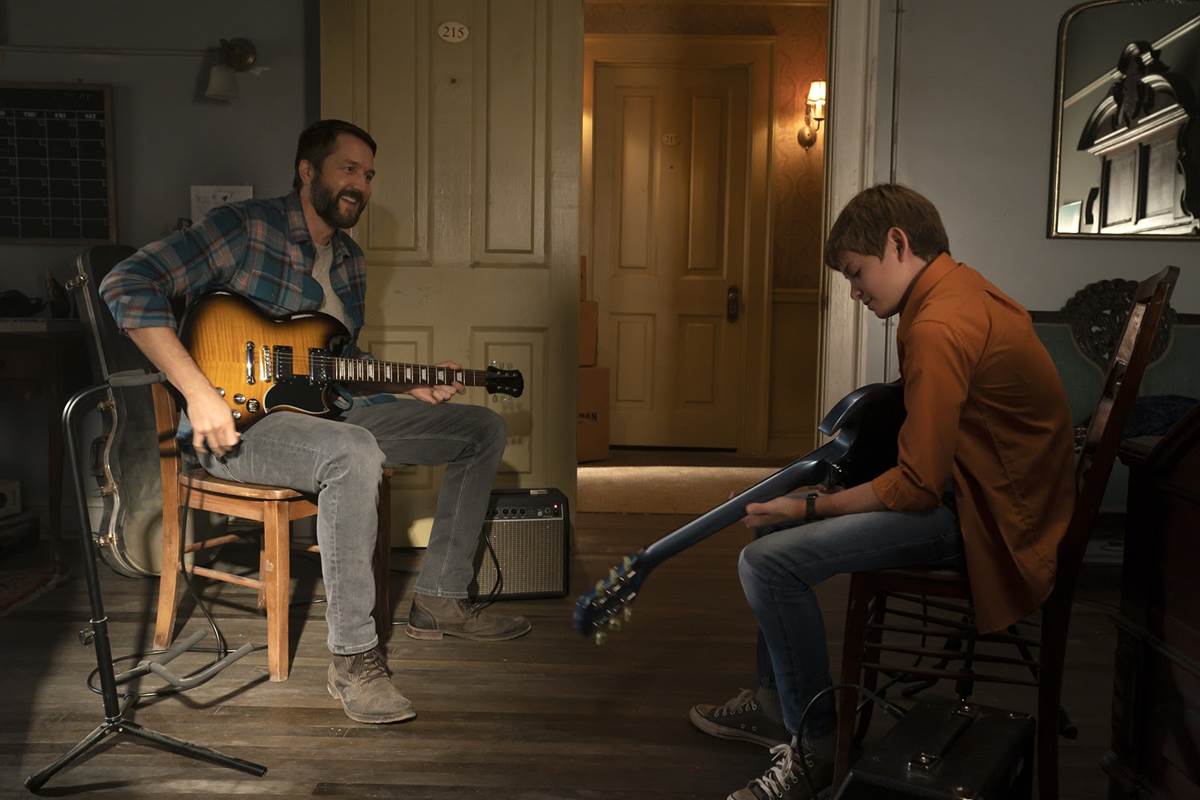 Zoey is looking for Wyatt and finds him in their parents room where he’s looking at an empty rocking chair. He asks her to come sit with him and be quiet and it starts rocking again. “Savannah, is it you?,” Zoey asks. The mirror fogs up and the word “No” appears. “I think I’m gonna need my hat,” Wyatt jokes, now displaying a lot more bravery in the presence of a ghost than when they first moved in.

Griffin finds Harper in the woods back in 2011 and tells her they’re not moving, but also tells her he noticed the year had been changed to 2011 on the radio, the year her dad died. She was on her way back to the hatch and tells him she saved her dad and that he was planning on buying The Tremont. They head down into the bunker. “We’re going to find a whole new world up there,” Harper tells Griffin as they proceed into the basement. The camera zooms in on the year dials on the radio and they suddenly start spinning. Upstairs, The Tremont looks the same as it did before, so Harper’s dad clearly didn’t buy it. Griffin doubts that Harper saved her dad and she gets upset as she leaves. Arriving at her house, she starts calling for her dad before she even enters. Topher hears her and shares that he’s been thinking about him too because today’s the anniversary of his death. Harper goes into her room and starts looking at her art, which features lots of water and lily pads. She sits on the floor and looks at the picture she made of her dad with her at the lake and then looks at her painted boots, which also have lily pads on them. She starts to cry.

Heading outside, Harper finds her mom and says “Dad didn’t die on Bayou Road. It wasn’t a car accident.” She remembers that she was in a canoe with her dad at the lake and it went over. She blocked out that memory. “The doctors, they said not to tell you,” Jess tells her, revealing that Harper woke up one morning and had this new memory of her dad dying in a car accident. “For the first time in forever you seemed so at peace.” Jess stuck with that story for her daughter’s sake. Harper asks her mother if she knew her dad was planning on buying The Tremont. When Jess asks how she knew that, Harper says “I don’t know. Maybe I made that up to.” Jess shares that the coffee shop (seen in 2011 as Jiffy) was where she and Chris had their first date and when she sold his yellow GTO, she used the money for a down payment on it. “Finally it all makes sense,” Harper says.

Griffin finds Zoey and Wyatt in their room with a rocking chair, which they moved from their parents’ room to keep an eye on it. The tell him about asking if it was Savannah and that the mirror told them no. “We think it’s someone else,” Zoey tells him. “Someone who likes rocking chairs,” Wyatt jokes. The twins go downstairs to make peanut butter and jelly sandwiches, leaving Griffin alone with the rocking chair, which begins to move again. Looking down on the ground, Griffin sees wet footprints on the wood floor that lead out into the carpeted hallway. 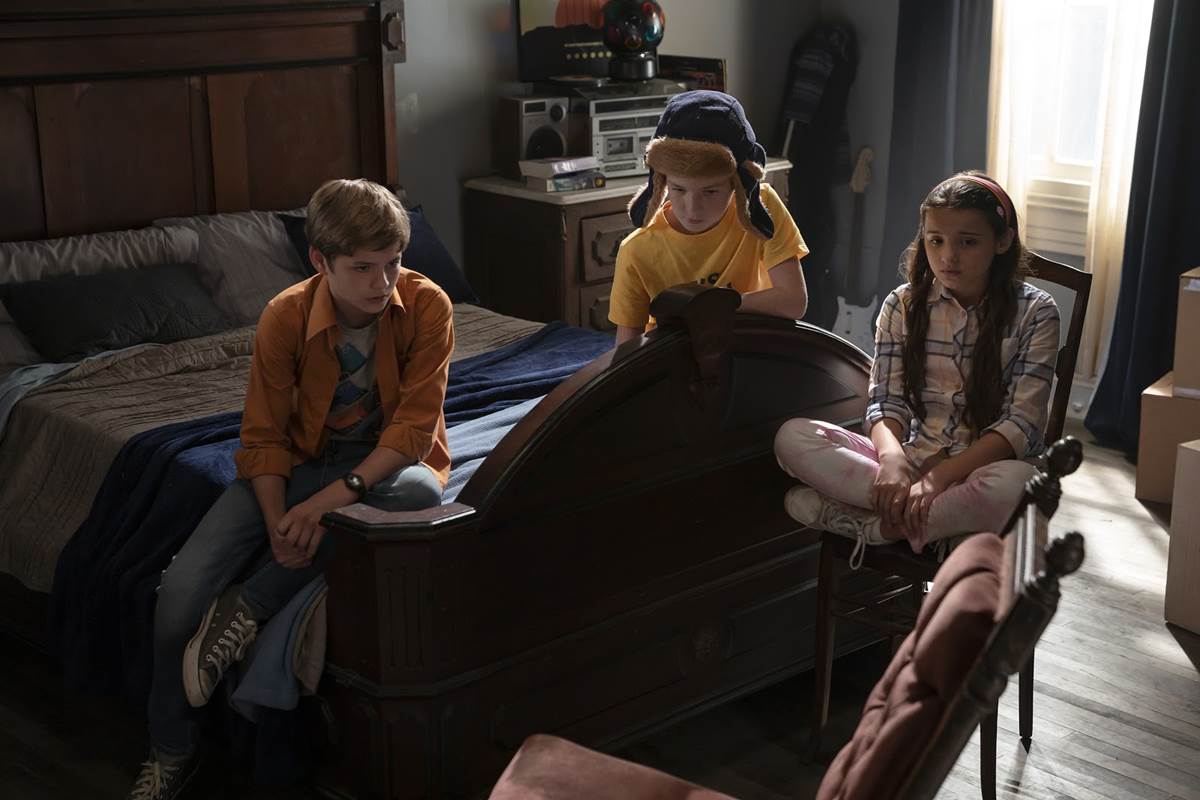 Griffin follows the ghostly footprints to the basement where he finds Harper, who tells him everything she just learned about her dad. “Even if I wanted to go back, it’s too late,” she admits, because by this time of day in 2011, her dad had already drowned. She sees the wet footprints and thinks it could be her dad. Just then, a box gets knocked over on the shelf and Savannah pops out.

They ask what Savannah is doing there since she was so afraid to go through the portal the last time they saw her. She pulls out a picture that was found in the walls while doing some renovations on The Tremont that shows a girl who looks just like Harper, dated 1930. “Looks like you’re not done time traveling either,” she tells Harper. Savannah believes it was put their just like the paint can message she sent to Ben.

In the bunker, Griffin changes the year on the radio to 1930 and Savannah is mesmerized by it. As they head towards the hatch, she pauses to look at the glowing lights inside. Savannah is the first one to exit the hatch, feeling the shock. Staring at a truck that’s abandoned and rusted in 2020, it looks brand-new now. “There’s no rust,” Griffin points out.

They arrive at a farmhouse with a horse out front, the original structure that The Tremont was built out of. Stepping onto the porch, they look through the windows but can’t see anything. Since they’re not dressed in period clothes, Harper opens the door without knocking, hoping not to startle angbody.

Following the sound of music playing, they are led to a sitting room where a radio is on, the same one that’s part of the time traveling hatch. Hearing a noise upstairs, they quietly sneak up and find a Black man in a rocking chair looking out the window. He slowly turns his head to look at them and they run away scared. Opening the door to leave, they find a girl who looks just like Harper wearing a white dress like the one seen in the photo Savannah found. The credits start to roll and if you stay all the way through them, there’s one additional shot of the outside of the farmhouse. Somebody screams.

Disney hasn’t yet announced a second season of Secrets of Sulphur Springs, but with an ending like that, they have to keep it going. Like every episode, this one left me with a lot of questions. Is 1930’s Harper really her grandmother Marie or did they enter a parallel universe? Did the man in the rocking chair create the time traveling radio? Is he the ghost of The Tremont? And if the radio in the living room is the same one that becomes part of the time traveling bunker, did Griffin, Harper and Savannah just go far enough back in time that it hasn’t been invented yet and they’re stuck? We’ll have to wait for the second season to find out.

Did you know that most of the episodes of Secrets of Sulphur Springs are named after song titles or lyrics? After the fourth episode, titled “Time to Face the Music,” each episode has been inspired by a song. You can listen to each one below through Spotify.

Ranked: The Top 10 Extinct Attractions at Universal Orlando
TV Recap: “Queens” Sees the Girls Adjusting to a Member’s Absence in “Bars”
This Friday’s “20/20” to Focus on the Tragic Murder of Molly Watson
“Jimmy Kimmel Live” Guest List: Jim Gaffigan, Peter Dinklage and More to Appear Week of January 10th
Why I’m Restlessly Waiting for The Conclusion of Season 2 of Disney Channel’s “The Owl House”