Have you ever felt victimized by Hollywood rebooting something you loved as a child? If the answer is yes, then the 15th episode of season 32 of The Simpsons is for you! (And maybe you feel that way about the way this very show has changed and evolved over the years). In “Do Pizza Bots Dream of Electric Guitars?,” J.J. Abrams voices himself in a story that finds Homer in the shoes of many a Star Wars and Star Trek fan. 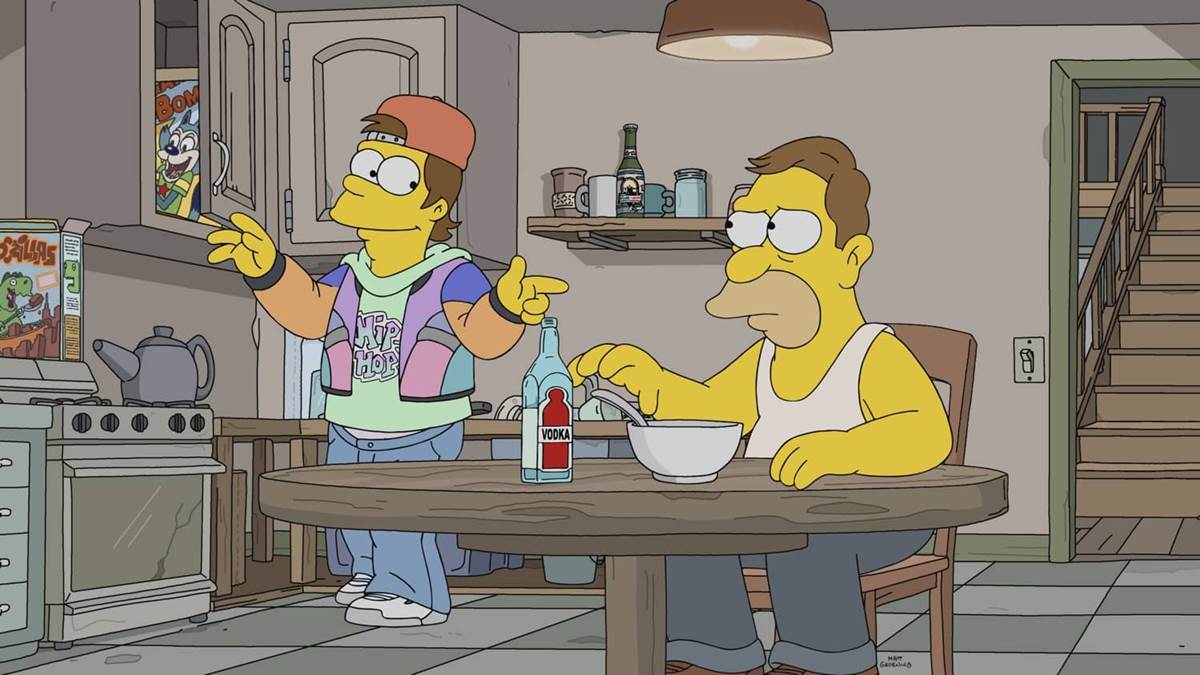 Once again rewriting Homer’s youth to keep him perennially 39, he was now a teenager in the 1990’s as evidenced by his choice in music, decor and clothes, including pump sneakers. Having an argument with Abe Simpson about his dreams of becoming a DJ, Homer races to work, passing a breakdancing Lenny and Carl in the streets.

Arriving at Razzle Dazzle’s Pizza-Tainment Palace, a Chuck E. Cheese-style restaurant owned and operated by Gil Gunderson, Homer operates the tech booth where animatronic figures known as Hippie Hippo, Foxy Lady, Wakkety Yak and Jive Turkey perform dated songs about pizza including “We’re Gonna Pizza Around the Pizza Tonight.” When a kid causes Wakkety Yak to malfunction by tossing a pitcher of ranch dressing on it, Homer improvises, putting on “Ice Ice Baby,” getting behind the busted animatronic and singing new words, making it “Slice Slice Baby.” The show proves to be so popular that Gil asks him to redesign and modernize the entire show.

Now known as the “Phuntime Phunky Phour,” Homer’s show is a hit when the FBI suddenly raids Razzle Dazzle’s Pizza-Tainment Palace. “This business is a front for drug trafficking,” an agent says as they pull an arm off Jive Turkey to reveal bags of cocaine. Gil is arrested and the episode then cuts to Homer outside Razzle Dazzle’s Pizza-Tainment Palace as an adult having a breakdown in the parking lot. Marge uses the parking cones she recently bought to protect him as she takes Bart, Lisa and Maggie inside for Ralph Wiggum’s birthday party in what is presumed to be an updated experience without animatronics, a trend the real Chuck E. Cheese recently started. Three days pass and Marge is worried because Homer isn’t his usual childlike self. As an example, she points out to the kids that he didn’t shuffle his pancakes like a deck of cards that morning or do a butt-scoot race with Santa’s Little Helper. Moe suddenly bursts in sharing Marge’s concerns, citing an example of Homer not drinking his beer through a crazy straw.

On their way to school, Bart and Lisa come up with a plan to find the original animatronics from Razzle Dazzle’s Pizza-Tainment Palace and reunite them for Homer to make a new show. Lisa suggests they find Gil and Bart says he knows just where to find him. Cut to “Little Los Angeles,” a tent city in Springfield where Gil lives. Luckily, he has a list of where each animatronic went during the FBI auction of his assets. “Lis, we’re getting the band back together,” Bart declares as he breaks the list in four parts, distributing it to Lisa, Marge and Moe.

Disco Stu has Jive Turkey, Professor Frink has Hippie Hippo, Sideshow Mel has Foxy Lady and Wakkety Yak was owned by Herman's Military Antiques. That last one is where they run into a problem as Herman just sold it to the assistants of J.J. Abrams, who has set up a Bad Robot production office in Springfield. They say he needs it as part of an ongoing effort to keep the filmmaker surrounded by childlike wonderment.

Entering Bad Robot, Lisa uses an L.A. accent to tell the receptionist that she has a pitch for a low-level executive. Left alone, they sneak through the lobby, complete with a Cosmic Wars poster (The Simpsons version of Star Wars). On their way to J.J.’s office, they also walk past two bins, one using the logo from ABCs Lost for “Lost Footage” and another nearby for “Found Footage.” 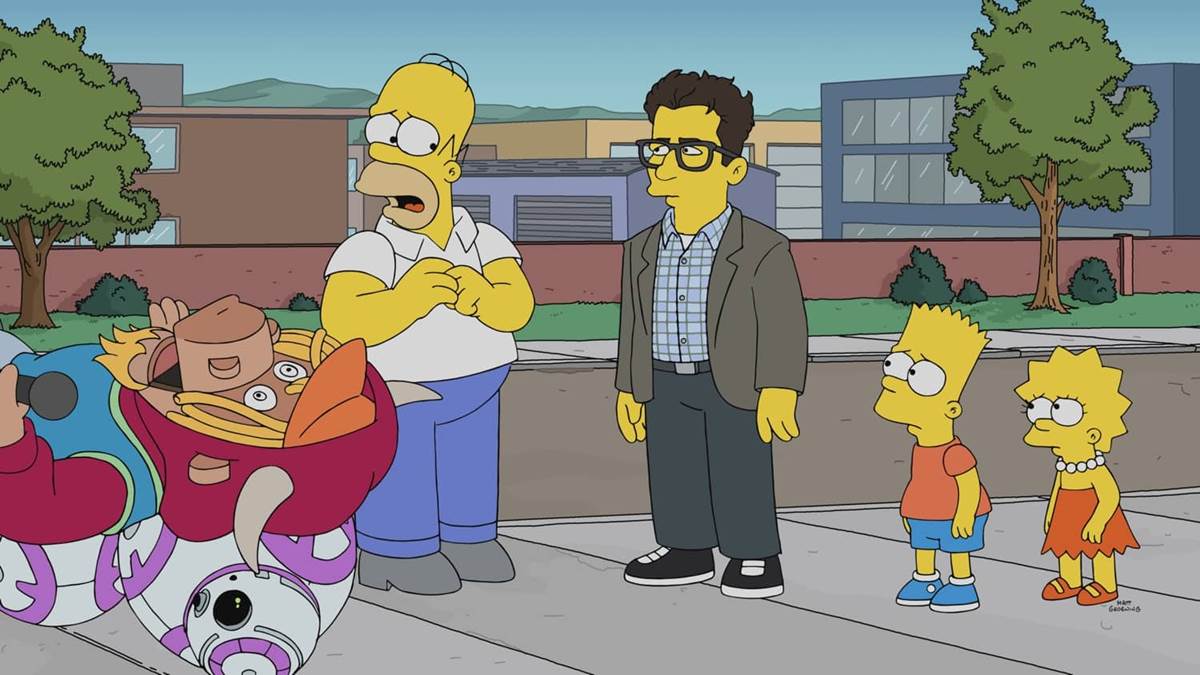 Finding Wakkety Yak in J.J.’s office, Bart and Lisa use three pink variations of BB-8 to roll the animatronic out into the parking lot where they are stopped by a security guard holding a Star Trek weapon. Homer is outside and has an emotional reunion with the yak figure when J.J. steps out of the shadows, an enormous lens flare sharing the screen. He instantly recognizes Homer’s need to see the figures perform together again and tells him “Your journey can be a Universal experience, or at least DreamWorks.” J.J. quickly apprehends all of the figures, vowing to reboot the characters in a new movie and saying his visual effects artists need to scan them into computers so they can be animated. “No!,” Homer yells. “The same thing happened again only several years later.” J.J. is standing by and replies, “That’s what I do.”

Homer is depressed and Marge suggests that he eat his feelings, so he goes to Krusty Burger where he applies an emotion to everything he orders. “I also recommend a hot apple cry,” Comic Book Guy tells him, joining Homer for his depressed fast food binge. Homer tells him what’s happening and Comic Book Guy shares that he’s very powerful with making movie studios change things as an online troll, taking credit for getting Sony to change Sonic’s teeth before confessing to having never seen the film he alleged to be outraged over. Homer goes home and starts an online campaign to stop J.J. Abram’s movie, using the hashtag “#PhreeThePhour.” A full year goes by, during which Homer does nothing but obsess online and start a small boycott movement. J.J. Abrams comes on TV from outside the Aztec Theater announcing a special screening of “Agents of P.I.Z.Z.A.,” a movie based on the animatronic characters, the logo for which is a parody of Marvel’s Agents of S.H.I.E.L.D. The tagline is “They’ll save the world in 90-minutes or the movie’s free.” Marge makes a mysterious phone call and doesn’t tell Bart or Lisa who it was to.

Outside the theater, a protest zone has been set up where Comic Book Guy and fellow disgruntled movie fans carry signs that say things like “Un-Release the Snyder Cut” and “Release the Sonic’s Teeth Cut.” Inside, J.J. Abrams takes the stage to introduce the film and thank the visual effects studios, some of which he admits to having not paid. Homer crashes the stage with a blowtorch and what he believes to be the only film reel of the movie, discovering that it was just a concession prop and the film is digital. “You can’t release this movie or change those characters. It will ruin my childhood,” Homer pleads with the filmmaker. 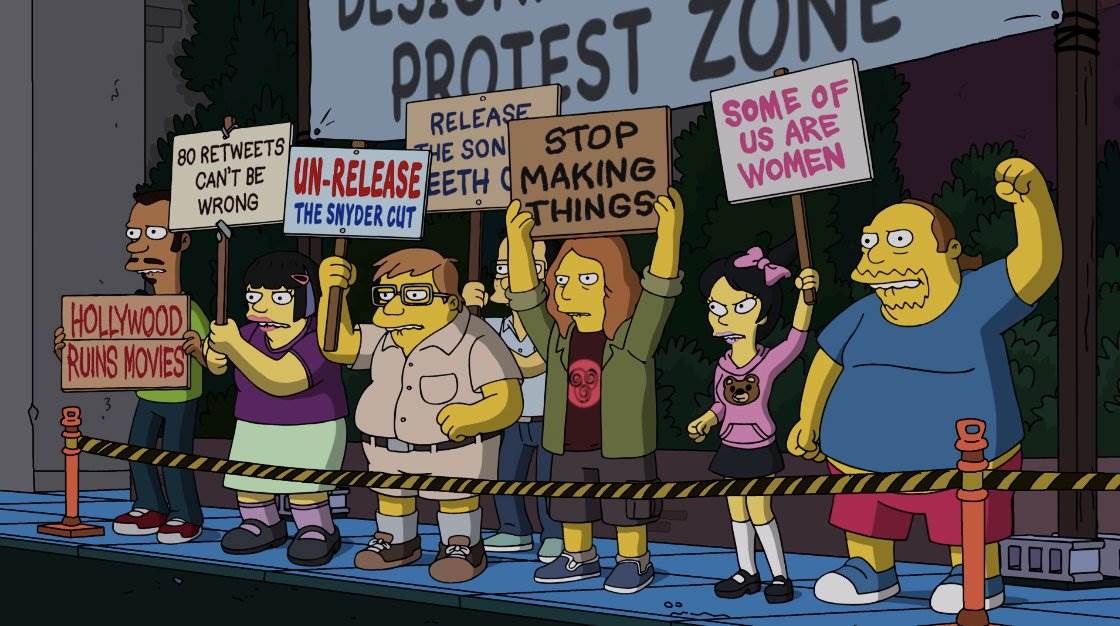 Just then, Abe Simpson hobbles out of the shadows. “A movie can’t ruin your childhood, I did by being a terrible father,” he apologizes to Homer. J.J. convinces Homer that this movie might help another child forget how bad their parents are, to which Lisa confesses, “I want to forget so bad.” Before the film starts, J.J. reveals the four animatronics reunited to Homer and shares that they have been converted into frozen yogurt dispensers for the after party. Homer happily positions himself under the Yak and dispenses fro-yo directly into his mouth.

The episode ends with Comic Book Guy and his companions uniting as “Troll Force Five,” a group whose tagline is “Earth’s Spitiest Heroes,” another Marvel reference. There’s a song to go along with it, which the end credits list as “World’s Worst Internet Troll” written by Mick and Michael Giacchino.

The credits conclude with a dedication to writer and producer David Richardson, who passed away in January. He worked on The Simpsons during its 5th season in 1993 and 1994, which could very well be the year Homer was a teenager in this episode.

This episode is dedicated to the memory of David Richardson, a great writer and a wonderful guy, who sadly passed away in January of this year. pic.twitter.com/sTzJeryzNA