The second season of the filmed-from-home BBC comedy series Staged makes its U.S. premiere today exclusively on Hulu. David Tennant (Voice of Scrooge McDuck on DuckTales, Kilgrave in Marvel’s Jessica Jones) and Michael Sheen (Castor in Tron: Legacy, voice of Nivins McTwisp in Alice in Wonderland) are back for a second season that’s full of surprises and big cameos. 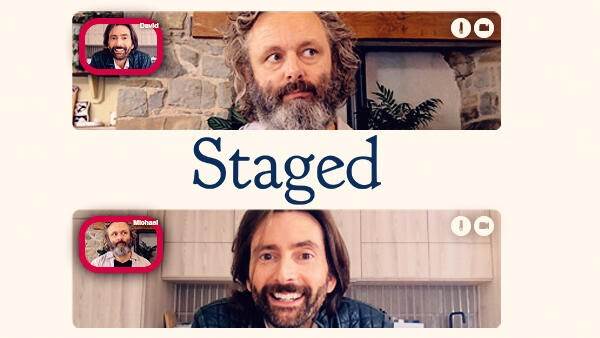 For the unfamiliar, the first season of Staged, also streaming on Hulu, found both actors playing exaggerated versions of themselves as they rehearsed for a play that would never come to fruition due to the pandemic they were in the  midst of.

The second season (or series, as they’re known in the U.K.) takes a step back, with David and Michael admitting that the first season of Staged was, well, staged. But when they get contacted for an American adaptation of the show to be produced in the U.S., they soon find themselves once again out of work when they are recast by British actors of higher stature with American audiences.

With a tongue-in-cheek look at the cruel realities of Hollywood, the second season of Staged offers hilarious comedy, giving viewers a way to laugh at the times we’re living through. From outrageous cameos to the shock of David and Michael discovering that they’re not famous enough to play themselves in America, there’s a lot of fun to be had and it’s all waiting for you on Hulu.