Hilarity ensues on April 2nd with FX’s new documentary film Hysterical, a look at the life of 15 women of stand-up comedy. Pulling back the curtain, it showcases how female comics support each other and have each other’s back as they not only make their names in an industry that has resisted entry to women while also innovating and elevating the artform. In celebration of the film’s debut at South by Southwest (SXSW), director Andrea Nevins was joined by Fortune Feimster, Rachel Feinstein, Marina Franklin, Sherri Shepherd, Iliza Shlesinger and Jessica Kirson (also a producer) for a conversation about the film. 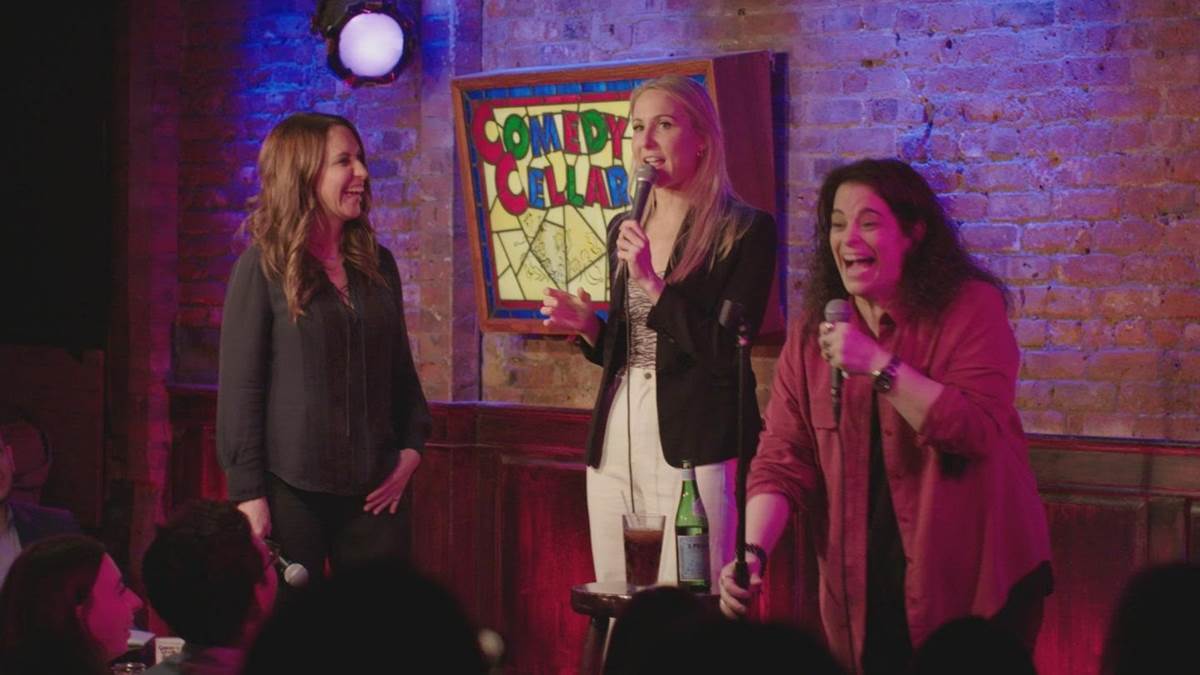 The idea for Hysterical actually began with another documentary project that fell through. Jessica Kirson was attached and had made connections at Campfire who took it to FX. “It went from there,” she explained. “I just worked with all these women and they’re so incredible and I wanted to show their talent and all the things they’ve been through in this business.”

With Andrea Nevins on board to direct, having previously made the Hulu documentary Tiny Shoulders, Jessica and Andrea got to work selecting the other stand-up comics that would participate. “We wanted to make sure we were getting a variety of people’s experience,” the director revealed, sharing that they wanted to feature women of different ages and from different parts of the country. The number 15 was determined to be the right balance, any more and the stories would’ve gotten lost in the shuffle.

Asked about their individual inspiration to get into comedy, nearly all of the participants agreed that they were inspired more by sketch comedy than by stand-up, crediting the likes of Carol Burnette, Lucille Ball, Tracey Ullman and some of the women of the 1990’s cast of Saturday Night Live including Cheri Oteri, Molly Shannon and Ana Gasteyer. But a few true stand-up comics were suggested, including Wanda Sykes, who inspired the way Marina Franklin speaks on stage, and Whoopi Goldberg, who was influential to Shari Shepherd.

“It never occurred to me that I wasn’t just like the Monty Python characters or I wasn’t just like Adam Sandler and Chris Farley,” Iliza Shlesinger shared, explaining that not all of her inspirations were women. It wasn’t until she really got into comedy that the subject of her gender became something she was aware of. “When you’re actually funny, people get over the fact that you’re a woman, for better or worse.”

While a lot of comics get their start at open mic nights, most of the participants in the panel found their stand-up comic voice through improv. “When I moved to LA, I immediately joined The Groundlings because this was how I could learn comedy,” Fortune Feimster shared. Marina Franklin was pursuing a masters degree in theater and got her improv training there, but shared that she found that she preferred having the stage to herself. The one example who went directly to stand-up classes was Shari Shepherd, who wishes she had been aware of Second City and The Improv at the time she was entering the field.

From body objectification by comedy club hosts and crowds to being harassed by male comedians, all six comedians on the panel have been through a lot. One of the silver linings to emerge is the way they support each other and other women entering the business. “Every generation of women helps the next generation and makes it a little easier,” Iliza Shlesinger shared. Shari Shepherd uses her status as a headliner to help up and comers who might be afraid to speak up. “In the clubs I’ve been in, especially on the road, it’s not regulated,” she revealed. “When you look at the setlist, you don’t see many girls on the setlist. They’re so afraid that they won’t get this time or the club owner won’t bring them back if they’re perceived as trouble.” With women who have already made a name for themselves in the business having their backs, the landscape looks a little better today than it did a decade ago.

One of the ways female comics have innovated the medium is by telling deeply personal stories and finding the humor in them. In the film, viewers will see Marina Franklin take her breast cancer experience and transform it into something that’s not only funny, but meaningful. “I have a daughter with heart disease and I keep trying to talk about it because other people might be going through it and might feel less alone,” Jessica Kirson shared. Shari Shepherd has found a similar level of connection with the audience by talking about her son with special needs, often getting thanked afterwards by parents of children with different abilities. And just this past summer, Iliza incorporated a recent miscarriage into her outdoor tour’s set, connecting with women and men who have both experienced that type of loss. “You can’t be successful in stand-up comedy for that long without being your authentic self,” she concluded.

Don’t miss Hysterical premiering on FX on April 2nd and arriving on Hulu the next day.