The newly opened “The Walt Disney Studios and World War 2” exhibit at the Walt Disney Family Museum not only brings to life the role the Disney Company played in troop morale through the insignia creations but it also showcases the Disney Studios’ overall wartime efforts. The new exhibit is housed in the Diane Disney Miller Exhibition Hall adjacent to the main museum which will remain closed until April. 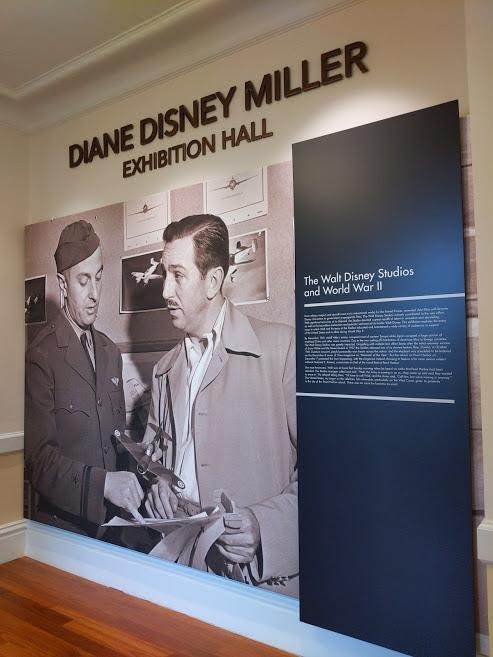 With its introductory panels, the exhibit explains how rapidly things changed at the Disney Studios as close to 500 troops arrived at its doors immediately following Pearl Harbor. It also takes a moment to discuss the impact of the Studio’s wartime efforts in expanded opportunities for women at the Studios while an adjacent display reminds us of the internment of fellow Americans of Japanese descent including artists Chris Ishii, James Tanaka, Tom Okamoto, Bob Kuwahara and Iwao Takamoto.

But my eye was immediately drawn to the oversized sketches from the storybook B1st by Disney animator Woolie Reitherman and Disney artist Retta Scott. Reitherman would pause his Disney career and joined the Army Air Force in 1942. He flew supplies over the Himalayas in support of Chinese forces battling the Japanese. His logbook and Distinguished Flying Cross are on display along with various other artifacts from the era. This section also featured stories of other Disney artists who enlisted including Frank Thomas. Meanwhile, Ward Kimball supported the USO through his lunchtime band Huggajeedy 8 that eventually morphed into the Firehouse 5. Kimball also offered up what were labeled “chalk talks” which were sketches and gags.

The War would challenge Walt Disney’s innovative spirit and ability to adapt to unexpected circumstances.  Many point to this era as igniting Walt’s desire to explore a variety of entertainment media and avenues.

The next section of “The Walt Disney Studios and World War 2” exhibit showcased a few educational films educating troops or those within wartime manufacturing. According to the exhibit, more than 90% of The Disney Studios’ wartime output was in support of the effort. Among these efforts were countless training and informational films for such equipment as the Norden bombsight or riveting techniques for Lockheed. And you can view a bombsight at the museum and even watch a portion of the riveting film. It was in this portion of the exhibit that I paused, having stumbled upon a photo of quite young Marc Davis and John Hench during the Jacksonville Project in 1942. I think it is among the earliest dated images I’ve seen of them at Disney.

Under the banner Inter-American Affairs the exhibit showcases the government-sponsored trip to Latin and Central America by Walt and a collection of artists that became affectionately known as “El Grupo,” and the various projects that sprang from it. Among the displays are concept and story sketches for Saludos Amigos and the Three Caballeros and even one of the group dressed in gaucho regalia. My eye fell on familiar sketches by Mary Blair of Los Posados and a stunning story sketch of The Three Caballeros leaning on what appears to be a large storybook displaying a picture of a fishing town perhaps at dawn with nets in silhouette. Looking at the image, I expected it to come to life at any moment.

Nearby under this Walt Disney quote “We made the honest effort to find out from them something of their cultures, customs, music, color, and humor” a small screen offers clips from the animated features Saludos Amigos and The Three Caballeros as well as the educational films Winged Scourge, Defense Against Invasion, The Grain That Built A Hemisphere, and Cleanliness Brings Health.

“The Grain That Built A Hemisphere” is an homage to corn and opens with a tribute to its development by the Aztecs. While in “Winged Scourge” you can watch the Seven Dwarfs demonstrate efforts to mitigate mosquito growth as “Whistle While You Work” plays. Later in the exhibit, I stumbled on a 1942 Fortune article reporting Walt Disney’s remarks during the story meetings for the project encouraging his team to use the Dwarfs for a bit of levity after the heavier topic of malaria spread by mosquito, “When you begin to get into gags and impossible things, you’re not accomplishing the job we’re supposed to do. Show a simple way how to get rid of mosquitoes.”

Among the more familiar stories of Disney wartime efforts were the never fully realized partnership between Walt Disney and Roald Dahl in the creation of a Gremlins feature based on his book published by Walt Disney Productions. Dahl as a part of the Royal Air Force crafted a story with the Gremlins and the females that were known as Fifinellas. Among the collection here you can view a photograph of Walt Disney looking over images of gremlins with numerous artists looking over his shoulder including Mary Blair and Roy Willams. The Women Airforce Service Pilots (WASP) would adopt Fifinella as their mascot and this gives the exhibit an opportunity to introduce patrons to this often overlooked part of the nation’s wartime effort. 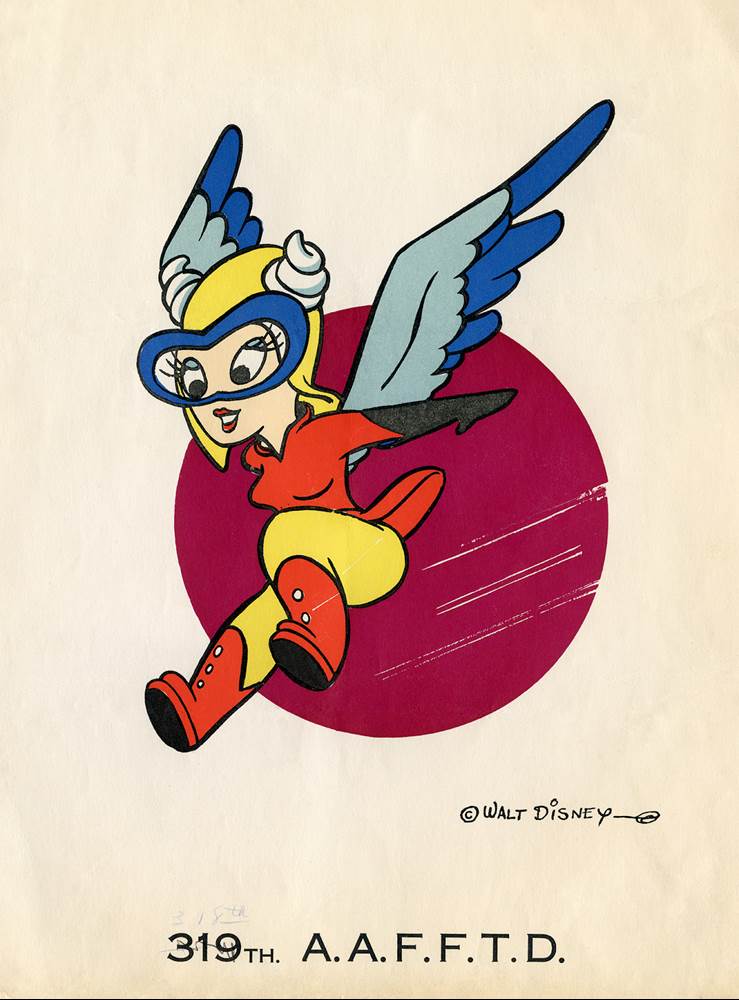 Before continuing with the Disney Studios role, the Museum takes a moment to showcase the World War II role of the Presidio (which is now home to the Walt Disney Family Museum) and personalizes the sacrifices in war by sharing the story of the highly decorated Air Force Captain John Austin who was shot down over Berlin in April 1945. 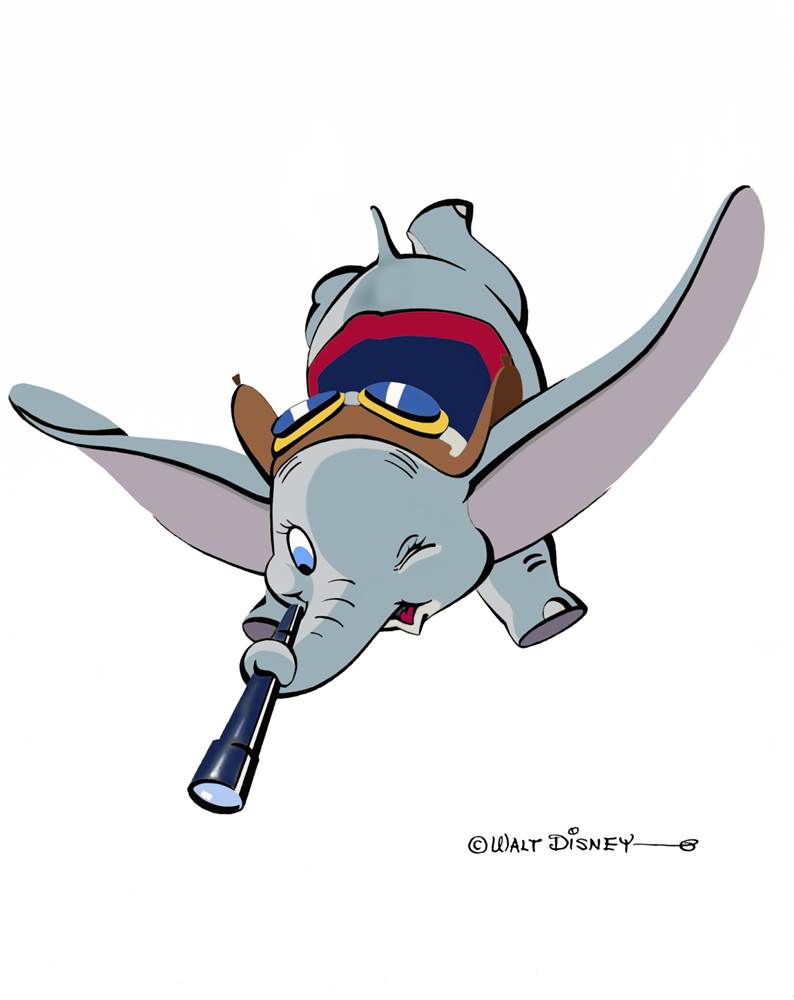 Around the corner is a large collection of insignias created by Disney’s artists. Below them is a tablet where you can select a matching image to learn more about it. I opted for more information about the one with Flower the skunk from Bambi and discovered it was used by Company B 84th Chemical Battalion, stationed in Oran, Algeria. The exhibit showcases only a few of the reportedly 1200 creations, but you can see them as patches, postcards, matchbooks as well as stamp sheets as well as articles from the era discussing them.

Nearby is an image of Walt Disney holding the insignia of the Stulag Luft III – a disgruntled Donald Duck behind bars. This insignia was born out of the drawings of captured airmen. One of them mailed it to his girlfriend and asked that she reach out to Walt Disney. Walt is holding the Studios’ creation and the exhibit includes the insignia as seen on the nose of a P47 Thunderbolt.

The upstairs portion of the exhibit focuses on the various animated presentations offering a brief written synopsis of each along with a variety of art including concept art, background paintings even a few cel set-ups. Under the banner Entertainment Short Films the exhibit showcases: 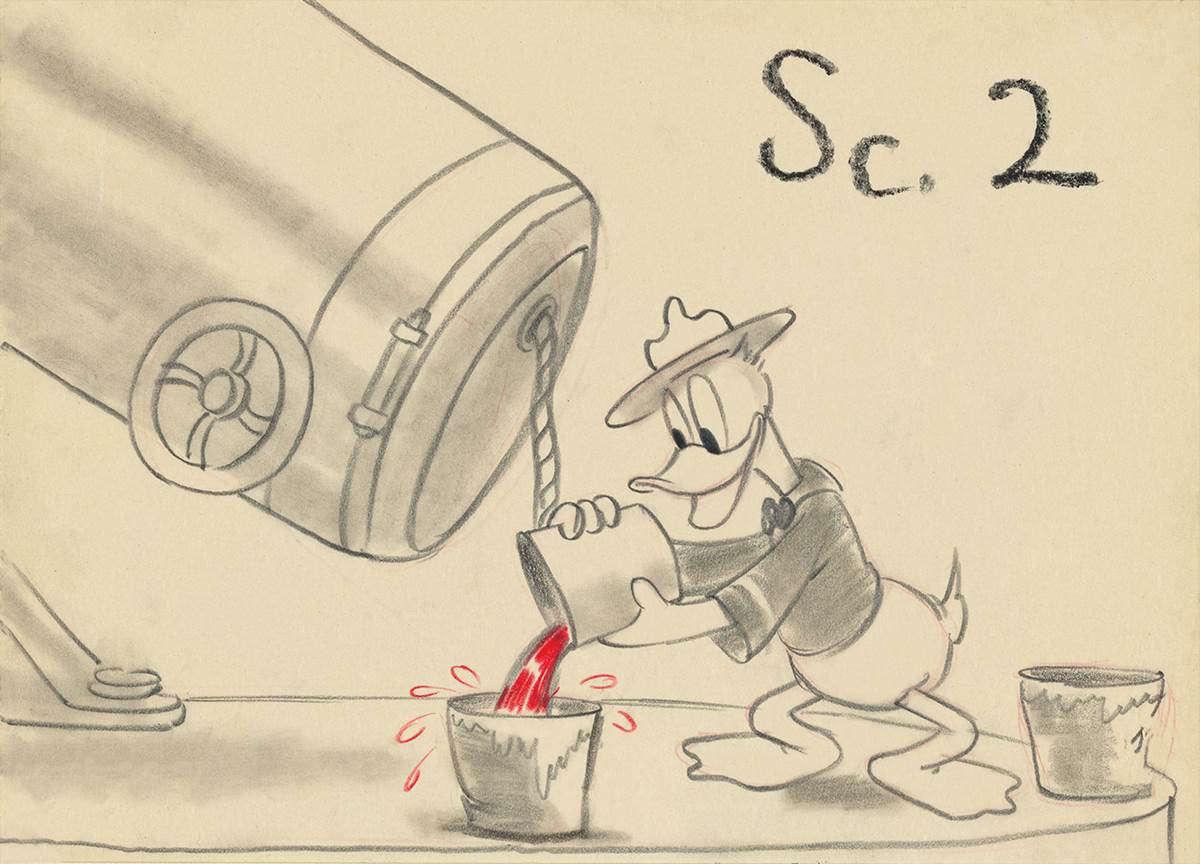 Donald Gets Drafted and the Vanishing Private offering clips of the 2nd title. A kiosk offers clips from the Army Mascot, Sky Trooper, Fall Out-Fall In, Home Defense, How to be a Sailor, Commando Duck, and Victory Vehicles. I was surprised to discover Commando Duck is the only film to a popular Disney character engaging with an enemy during the war and that Goofy had only two wartime short films, Victory Vehicles and How to be a Sailor.

Within the exhibit’s Propaganda Films segment were a couple of images for each of the four short films for Canadian war savings certificates The thrifty pig, seven wise dwarfs, Donald’s decision and all together. While several of Milt Kahl’s sketches for Reason and Emotion along with some concept art were presented adjacent to the one-sheet Der Fuehrer’s Face and the shimmering Oscar it received. Clips from both shorts play continuously as well. 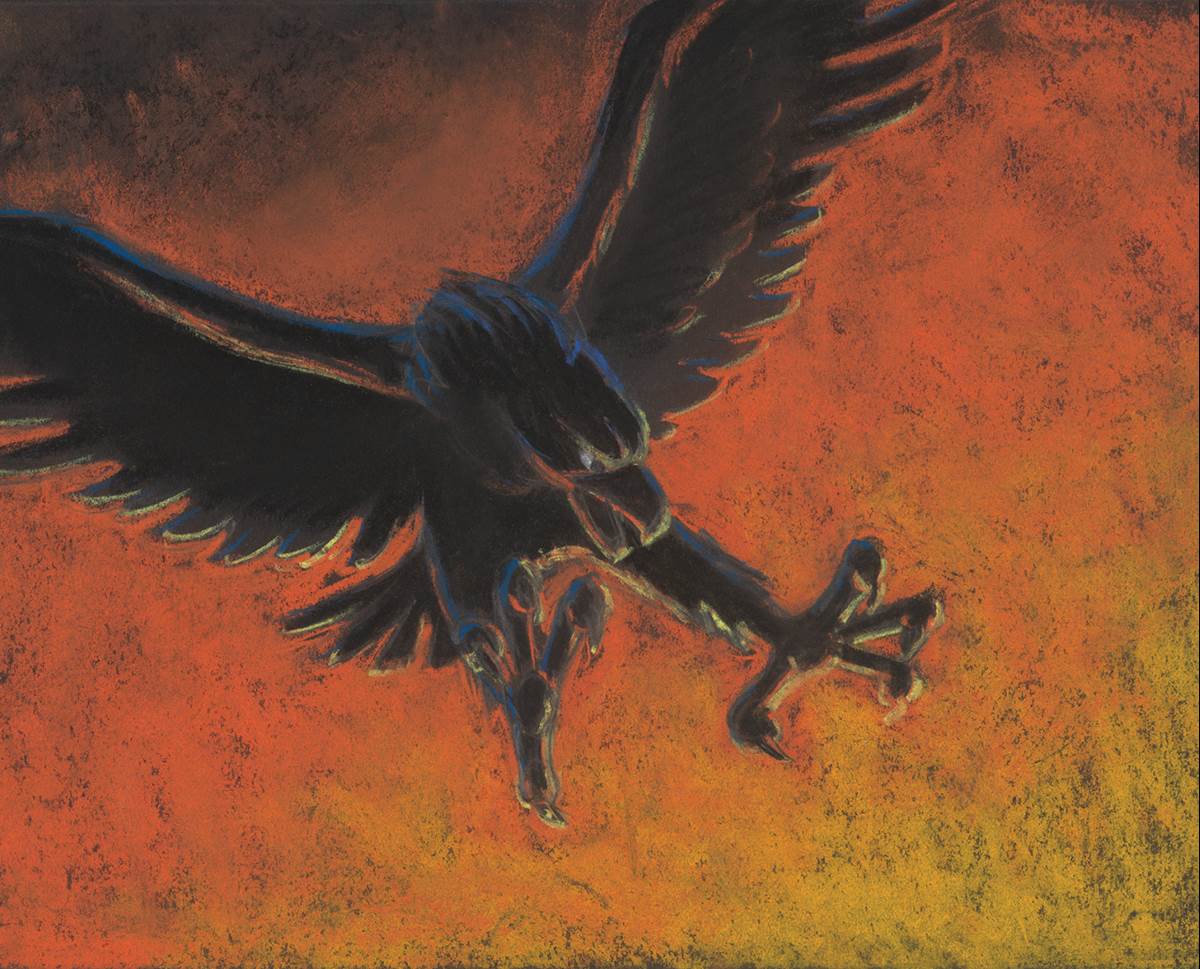 Not surprisingly a large portion of this upper-level display is dedicated to Disney’s Victory Through Air Power. On display are various character sketches, concept art, an incredible triptych sequence of aerial attack on battleships that was done with pastel on black paper. Marc Davis’ hideous multi-headed creature is on display as is his concept drawing for the eagle and octopus battling over the Earth. Clips of the film play nearby so you can glance between the animation and the remarkable images from the process.

The exhibits final collection of concept art and sketches come from the Disney Studios shorts  Food Will the War, Out of the Frying Pan Into the Firing Line, The New Spirit and Chicken Little were all created to boost morale and shape attitudes in the US to support activities that would be beneficial to the overseas fight.

Walking through the exhibit it was inspiring, humbling and honestly a bit cautionary to see the strength and power of effective storytellers. Effective communication especially by a group who are skilled enough to balance the drier essential data with more entertaining elements is an invaluable tool during times of uncertainty. Walt Disney’s studio was not in a strong economic situation but he was able to pivot and fill a valued role. As exhibited later in Disneyland he was fiercely patriotic so it is not surprising that he rolled up sleeves and threw himself and the resources available to him in support. I am extremely incredibly grateful for their efforts.