Raven’s Home returned today on Disney Channel and DisneyNow with the first new episode of 2021. Airing a little out of order, “Wheel of Misfortune” follows Nia and Booker on their first day of high school even though a handful of episodes that have previously aired from this season showed them already attending high school. Here’s a recap of the 9th episode to air from the show’s 4th season. 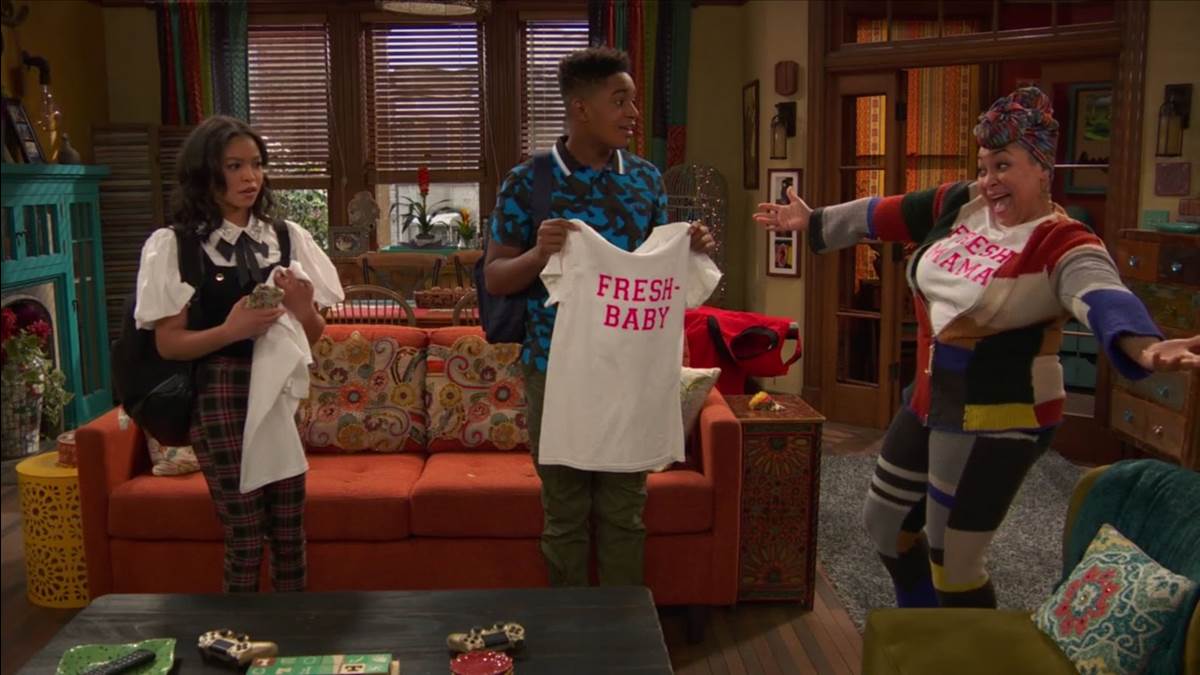 Raven is ironing in the living room and getting emotional as Booker gets ready for his first day of high school. Nia walks out talking to Tess on speaker phone, who is in a serious relationship with Ramon now and has broken their typical first day of school plans to wear matching outfits and go to school together. Raven disappears for a moment and returns with shirts she made for the twins that say “Fresh-Baby,” saying that since she and Tess can’t match, now they all can. Unzipping her hoodie, she has a shirt just like it that says ‘Fresh-Mama.” Nia and Booker look at each other and decide to run. Raven follows them holding up her car keys.“I’m your ride, where you going?”

In the gym at George Washington Carver High School, Tess and Ramon arrive in matching lettered jackets. Freshman are required to sign up for clubs and Nia thought Tess would join some of hers, but she’s joining things like the sneaker club and weight lifting club instead. In an effort to still spend time with her best friend, Nia starts signing up for some of Tess and Ramon’s clubs.

Booker is standing around having a hard time deciding on a club when Principal Jones comes in with a megaphone announcing that freshmen have to choose a club. He asks Booker what club he’s joining and suggests that he start his own if he doesn’t like the options.

Back at the apartment building, Levi finishes a call with a boy from his theater class in the hallway before opening the door. Chelsea and Raven are on the couch and notice that his new backpack has a broken strap. “There was this thing with Nathan, nothing to worry about,” he tells them, saying he likes it with just the one strap. Chelsea isn’t concerned but Raven thinks he’s being bullied, logging in to Levi’s “Peanut page” to see who Nathan is and commenting that he looks big. Raven thinks that without Booker around, Levi is now being bullied. He comes back into the room and asks Chelsea for some money. Raven points out that he packs his lunch and asks why he needs money. “Sometimes it’s just safer to have some extra bucks on you” he replies.

Later, Booker is playing Fortnite when Nia suggests that he start a club around his love of the game. She then reveals that she has signed up for 52 clubs in an effort to do what she wants and spend time with Tess and Ramon. Booker has a sudden vision where Tess tells Nia “Well, I guess that’s it between us.” He tells her he thinks he saw Tess ending their friendship and Nia asks for more information, like what Tess was wearing. When he says Tess was wearing green, she relaxes because Tess never wears that color. Then Tess shows up at the door asking to borrow Nia’s sweater, the green one, for her date that night.

At school the next day, Nia is crossing her name off some of the extra clubs when she meets a girl named Angelica doing the same thing. It turns out they have a lot in common, both being in book club, eco club and movie club. Nia joins Angelica’s Spanish club and the two go off library hopping together. Principal Jones finds Booker pinning up a sheet for his Fortnite club and tells him that if nobody signs up, it’s not a club. Booker borrows his megaphone to announce it to the school but nobody comes to sign up. When he learns that as the head of the club, he will also have to log their hours and write reports about what they learn, he asks himself, “Did I just give myself more homework?”

At the apartment, Raven has her boxing gloves out while Chelsea sets up her medication kit, part of their plan to help Levi. Chelsea’s approach is to boost his inner strength and when Levi gets home, he says he could use the confidence boost. While meditating, Chelsea falls asleep and Raven takes Booker to the roof for boxing practice, finding that he’s surprisingly strong.

On the couch, Booker and Ramon find out that they’ve been playing each other online in Fortnite for a while under their screen names. Ramon calls Tess and puts her on speakerphone while she cleans her room and they play. Nia walks through the room with Angelica as they head out, Nia loudly sharing that Tess can’t join them because she’s in too many clubs.

The next day, Chelsea is upset that Raven taught Levi how to box. When he comes home from school, he exclaims “I did it, I beat Nathan” Questioning him further, Nathan is his scene partner from acting class and they were both auditioning for the part of the gym teacher in the school play. Levi got the part and Nathan will be his understudy. Raven plays it like she knew that all along and Chelsea gets frustrated that she caused unnecessary worry.

That night, Booker has Ramon on speakerphone as he coaches him in Fortnite. It turns out that Tess has joined the club and is playing, too, and as Nia goes to make snacks for her and Angelica, her new friend notices Booker’s username and realizes he’s “BDressingNoSalad,” a player she respects. She joins the club and Nia suddenly finds herself again without a friend. She gets frustrated, slamming the snack bowl on the coffee table and going to her room, slamming the door. Tess hears and says she’s coming right over.

Raven and Chelsea get to Nia’s room first, asking her what’s going on. “I feel like I’m losing my best friend,” she explains. Chelsea talks about how she and Raven have been friends for a long time through each other’s relationships and breakups, cheering her up as Raven and Chelsea make each other emotional.

Tess comes in wearing the green sweater and Nia apologizes for overreacting, sharing that she feels like they’re drifting apart. They come out into the living room where Booker is playing with Ramon and Angelica. He turns around to see Tess say “Well, I guess that’s it between us” to Nia, having a new understanding of each other. Nia and Tess decide to go out for ice cream and everyone joins them, inspiring Booker to start a new ice cream club. The last scene shows them enjoying ice cream made from different milks at school and Principal Jones asking if they need a faculty advisor. Parodying his earlier megaphone speeches about club participation being required for freshmen, Booker says “Faculty advisor participation, not required.”

The next episode of Raven’s Home will premiere Friday, March 26th. Here’s a description of the next episode, titled “Diff’rent Strikes”:

When school is interrupted by a Chicago teachers’ strike, Booker has a vision and enlists Nia, Levi and Tess to help him start a home study group that quickly spirals out of control.