TV Recap: Sydney to the Max Kicks Off Season 3 With “Tearin’ Up My Room”

The 3rd season of Disney Channel’s Sydney to the Max kicked off today on the cable network and streaming on DisneyNow. The season premiere, “Tearin’ Up My Room,” finds Sydney starting to feel the transition from tween to teen when she gets the urge to redecorate her room. Here’s a recap of the season 3 premiere, splitting the two stories between the two title characters. 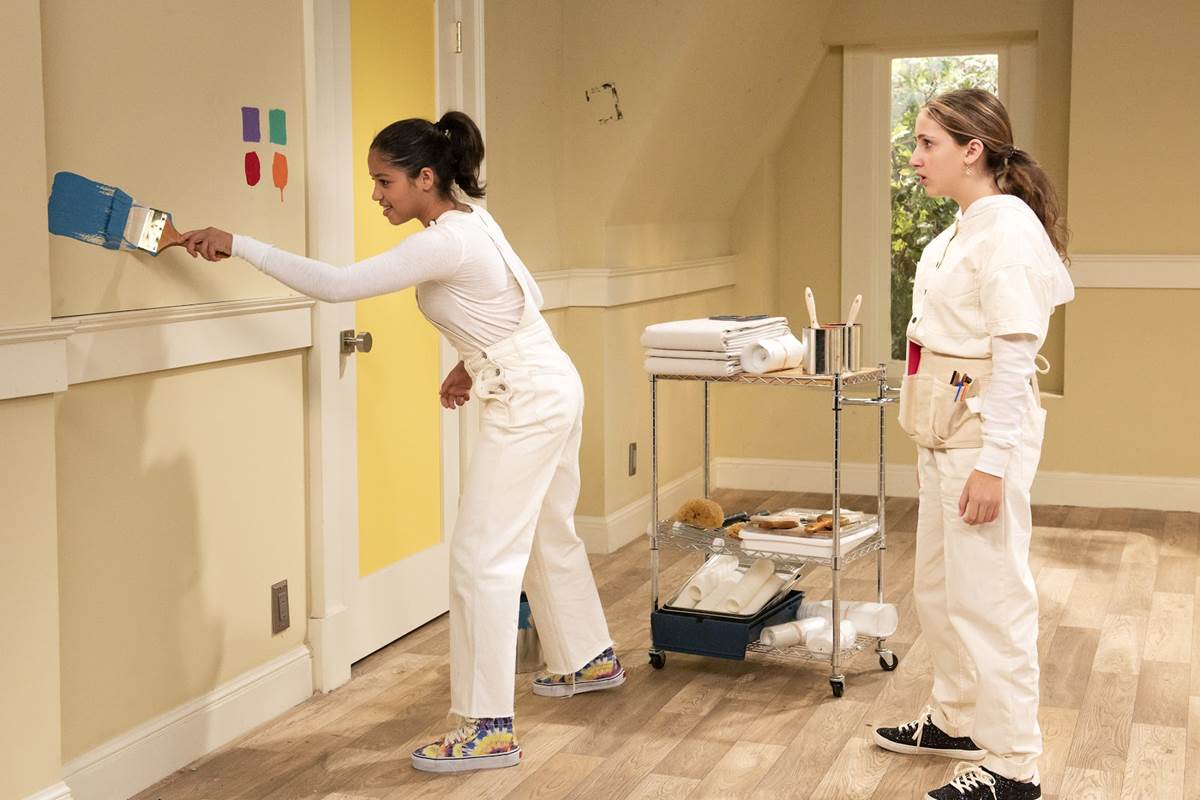 Sydney has just returned from summer camp and Max picked up Olive on the way home. He’s desperate to hear all about Sydney’s music camp summer, but all she wants to do is hang out alone with Olive. Getting up to her bedroom, with its bright yellow walls and pops of bright colors, she tells Olive that as she gets ready for 8th grade, she feels like her room no longer represents her. “Everything in here’s gotta go,” she tells Olive.

Down in the kitchen, Sydney finds Grandma Judy who has just returned from a trip to Paris and is trying to extend her vacation by dressing Parisian, eating cheese and baguettes, and reading a book of French poetry. Syd tells grandma that she wants to change  her room and she worries about Max’s sentimentality as he walks in with an empty tube of sunscreen that Sydney had at summer camp, telling her it’s going in the scrapbook. Nervously asking if she can change her room, Sydney answers all of her questions for Max before he can speak. “Am I done?,” he asks when she finishes. “Fine, you can redo your room.” He still wants to hear about camp, but Sydney brushes him off as she goes upstairs with plans to sell all of her furniture to buy paint and a new bedroom set.

In the present, Olive finds Syd in her empty room painting colors on the wall to see what she likes best. Taking artistic inspiration from her summer camp experience, she and Olive begin to paint with all the colors. “Throw out the rulebook and let your creative tiger out of its cage,” Sydney tells her as they paint shoe prints up the walls and write lyrics to Sydney’s songs on the walls and even the floor. When Max walks in, he freaks out. “What have you done?,” he asks as he tells Sydney he’s going to pay to have the room redone. Sydney was already going to sleep at Olive’s that night because of the fumes, but now she leaves frustrated at him.

The next morning, Sydney and Olive come back and realize they don’t like Sydney’s new room. Realizing her dad was right, Olive tells her she doesn’t have to admit she was wrong because her dad already told her he was going to redo her room. Downstairs, Judy tells Max he needs to pick his parenting battles wisely, confessing that she almost didn’t let him have a skateboard. “Imagine what life would’ve been like without your skateboard,” she shares after revealing that fact. Max goes upstairs and Sydney pretends to be upset with him when he tells her he’s not going to change it. “The important thing is you love it,” he tells her.

Later, Grandma Judy finds Sydney sulking in her room and she confesses that she doesn’t like her redesigned room after all. “Part of growing up is being able to admit when you’re wrong,” her grandma tells her, explaining that coming clean with Max will be more like the “New Sydney” that she’s starting to feel like.

Downstairs, Sydney has a hard time telling her dad that she hates her room and once again has his side of the conversation for him before he can speak. “So when do you want to get started?,” he asks her when she finishes speed talking. He tells her he’s proud of her for admitting that she made a mistake and lets her live downstairs in the Girl Cave until she knows what her room should be. She finally sits down to tell her dad all about camp.

At the end of the episode, Sydney invites Max and Grandma Judy in to see her new room. The bright walls are now a dark green and the room has a Bohemian vibe to it. Sydney is weirded out that Max likes it so much, but he finds one area that he doesn’t understand and it makes her happy. Back in 1993, Max just started 8th grade and he and Leo feel like everyone in their school will be looking up to them. But looking around, Max realizes all the other boys are now taller than him. Getting called “Short stack” by another student, he makes a plan to grow 3 inches by the next day.

That morning, Leo is in Max’s living room when he comes downstairs. He took apart his shoes and glued together the soles to make platforms, spiking his hair for an extra inch of height. “Between the hair and the shoes, no one’s going to make fun of me now,” he exclaims as his mom walks in and laughs, telling him it’s not Halloween yet. Sitting him down for a heart-to-heart, Judy tells Max that there will always be mean kids who don’t know him, but he says he feels like a loser for being short.

At the arcade, Max uses a milk crate behind the prize counter to make himself seem taller when another boy from class, Benny, comes to redeem some tickets for a prize. Max realizes he’s actually taller than Benny and makes a plan to spend more time with him at school.

The next day, Max and Benny are hanging out in the hallway and everything’s going well when Benny decides to ask out a tall girl named Tamira. Max stands on his tiptoes when he’s alone and when Benny comes back, he tells Max that Tamira just has to see if she can get out of babysitting. Max thinks that was Tamira’s nice way of letting Benny down, but she shows up right away to say she got someone to cover so they can go on a mini golf date. Max is shocked and Benny tells him “Max, it’s not about altitude, it’s about attitude.” When he meets up with Leo, Max has adopted that same mentality about his height.

Sydney to the Max will be back with another new episode on Friday, March 26th. Here’s a description of the next episode, titled “A Few Good Mentors:”

As part of a yearly 8th-grade tradition, Syd and Olive get paired with two 6th graders to mentor. When Sydney sees her mentee Lucy is very shy, she goes a bit overboard trying to help her make friends.