The Simpsons celebrated their 700th episode milestone on March 21st with season 32, episode 16 titled “Manger Things.” A flashback story to a Christmas we haven’t seen before, the theme is fitting because the series began with a Christmas special. It also makes a reference to the fact that this episode comes after Christmas, a joke that probably won’t play as well through Disney+ reruns. Here’s a detailed recap of “Manger Things, but first, the couch gag is back!

Couch gag: “Homer’s Family” by Bill Plympton – Set to Maurice Ravel’s “Boléro,” Elements of Homer’s head break off to create the rest of his family, with his mouth ultimately becoming the couch and everyone taking a seat. Click here to read Bill Plympton’s blog post all about it. It’s Christmastime and an establishing shot of the Simpsons household shows that Bart has gone up to the roof and written “El Barto” in the snow. Inside, Homer stops Maggie from sucking on a glass ornament instead of her pacifier, with the youngest Simpson giving it to the cat, Snowball II, who eats it and coughs it back up as a hairball, which Homer proudly hangs on the tree. When Bart finds a homemade ornament attributed to Todd Flanders, he asks what it’s doing there. Marge begins to tell the story about it, saying it was six years ago. “Oh, you know the year,” she says, explaining that an overrated film won the Oscar, Tom Brady won the Super Bowl, and a politician had to apologize for saying something stupid.

It’s now six years prior, with Lisa and Bart looking younger and Homer having more hair. Homer and Marge are on their way to the office Christmas party at the Springfield Nuclear Power Plant and Marge asks Homer not to embarrass her. The plant is extra festive, with giant candy canes rising out of each reactor. At the party, a drunk Lenny hits on Marge and he and Carl spike a Buzz Cola to secretly get Homer drunk.

C. Montgomery Burns is dressed as Santa, with Smithers close by as his elf. “Oh, it’s nice to get close to the workers once a year,” Mr. Burns says as the camera pans back to reveal that he is speaking from an elevated level looking down on the festivities. He announces that he has hired singers to perform contemporary hits (i.e: classic Christmas carols) and has two stern looking security men shoot money into the air from guns. Home is now plastered and finishes a carol with improvised lyrics about how bad Mr. Burns is. “Release the hounds,” his boss cries, commanding each of them by name: “On Slasher, on Gasher, on Mangie and Mixen, on Stalker, on Vicious, on Rabid and Ripsom.” In the ensuing panic, an ice sculpture of Mr. Burns’ head rolls out the front doors into Springfield, passing the Aztec Theater (Frozen is playing) and finishing it’s journey outside of Springfield Elementary where Groundskeeper Willie uses a piece of ice in his drink, saying “On cool me whiskey.”

The party is over and Marge is furious, telling Homer it’s time to go as he fills his pants with shrimp. They ride home together in an Uber and Marge tells him he can’t come home until he’s a changed man. Homer attempts to sleep at the bowling alley, baseball field, ice skating rink and lastly the church, all of whom turn him away. Reverend Lovejoy suggests he try Ned Flanders. Maude isn’t happy to have Homer living with them and she’s pregnant with Rod, due any day now. Winning the argument, Flanders says “Jesus said love thy neighbor, even though he never lived next to anyone.” She says Homer can stay in Flander’s man cave. 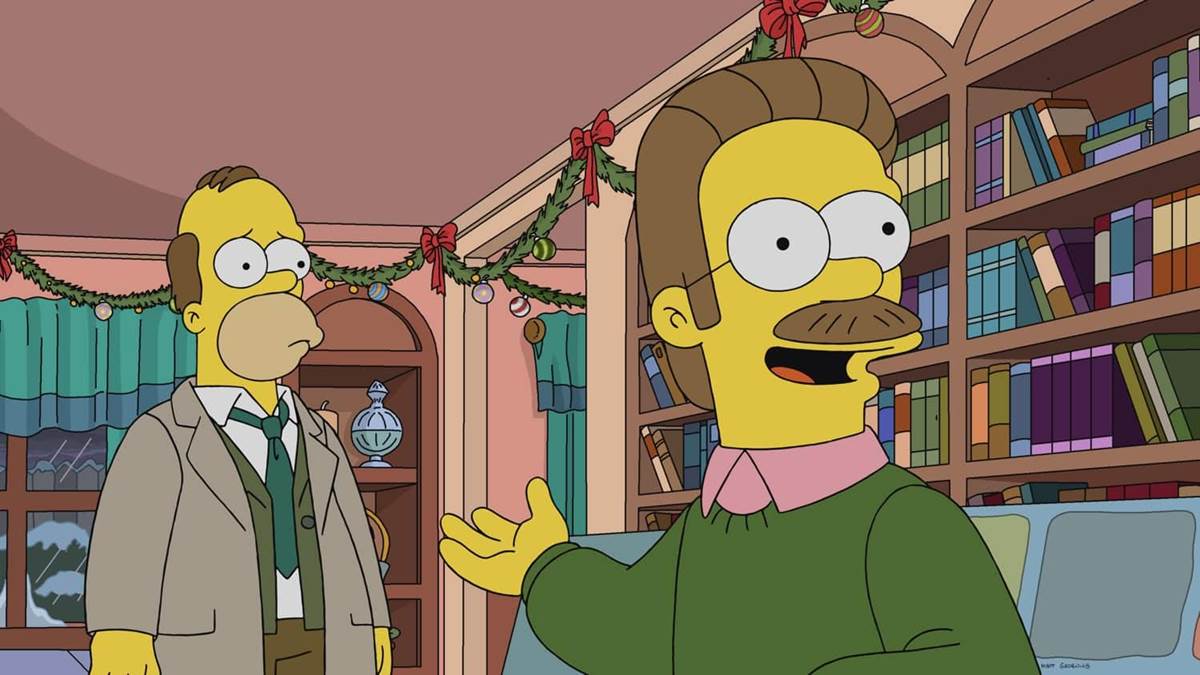 Homer ends up in a room where all of the sports paraphernalia is religious, including a neon crucifix. That night, Maude wakes up to a noise from the kitchen to discover that Homer woke up and ate their raw Christmas ham. Back in Flanders’ mancave, Homer has strange visions about the artwork in the room.

In The Simpsons’ living room, Abe Simpson tells Marge she should let Home come home. Marge mentions some of Homer’s repeated failures to his father. “You must see it, you live with us temporarily,” she tells him. “What do you mean, temporarily?,” he replies. 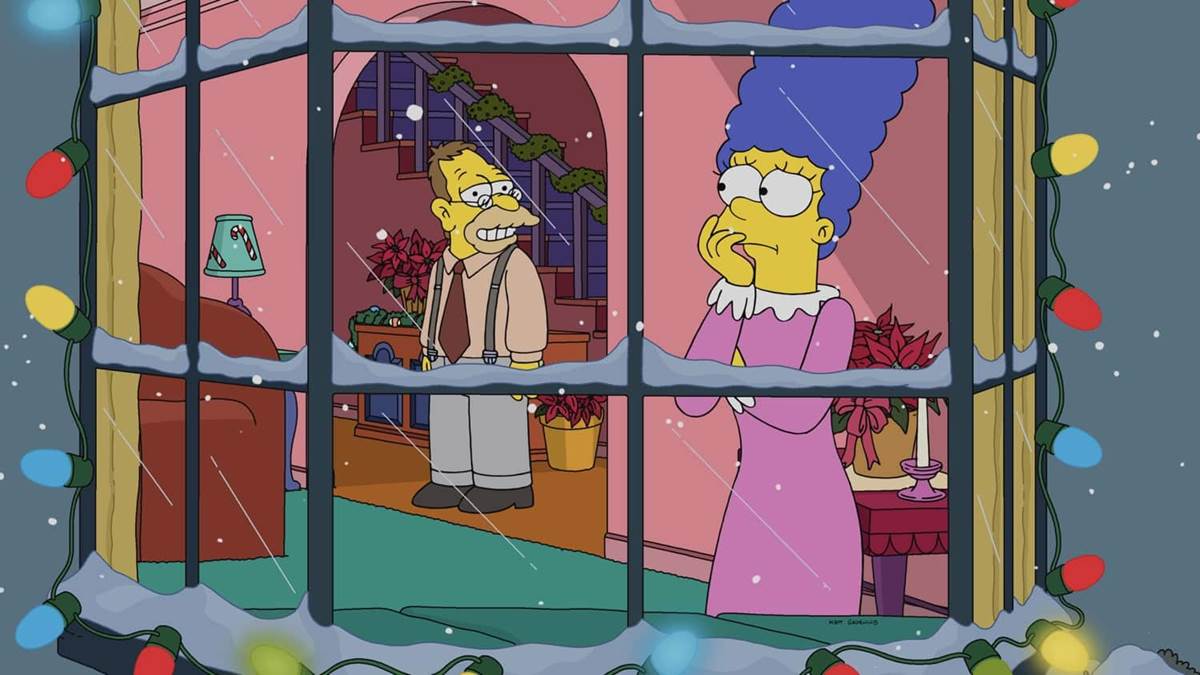 Upstairs, young Lisa and Bart are watching “The Krusty the Clown Show” and an “Itchy & Scratchy” short comes on in which Itchy and Scratchy are in the Florida Everglades and run over an alligator, the blade on their boat spitting out a gator skin handbag, belt and boots. After turning the TV off, Marge watches her kids hug and tell each other they love them. Looking out the window, Bart sees a snowman and thinks it’s Homer. He gets upset when its head falls off and crows peck its eyes out.

The next day, Marge takes Bart and Lisa Christmas shopping at Springfield Mall, which has a warning out front: “Warning: Chatty elves are not affiliated with the mall.” Gil is a Salvation Army Santa who’s about to be stripped of his privileges, something that happens just as Marge walks away. Inside a store, Mr. Pettigrew (aka Yes Guy) senses Marge’s marriage trouble and preys on her to make a sale, telling Bart, “Little boy, if she doesn’t buy it, she doesn’t love you.” Marge is quick to respond with “Oh really, do you have a happy home life?” Yes Guy quickly responds in his usual manner, but corrects  himself: “Ah ye… noooo” 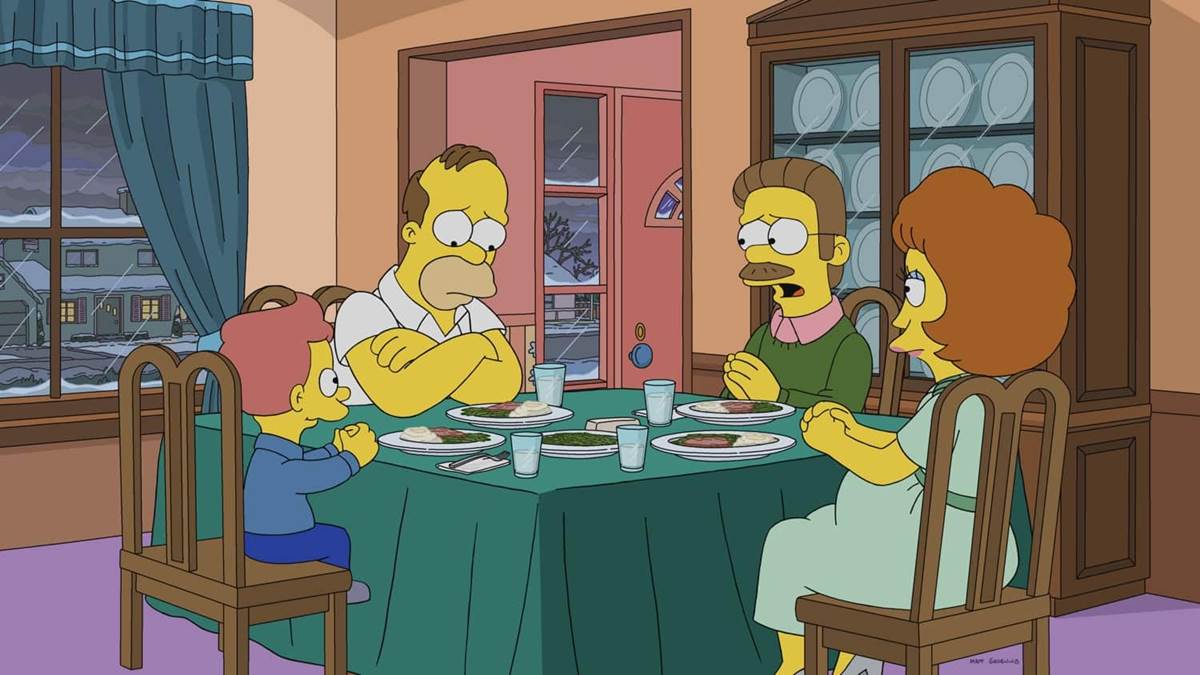 It’s dinner time at the Flanders’ and Homer is asked to say grace. During his prayer, Homer uses the word “Jackass” to describe his host and Rod repeats it back to his dad. Maude is angry, but knows Ned won’t kick Homer out. She asks Ned to go get some of the Christmas candy and with her husband absent, she tells Homer to leave.

Homer goes directly to Moe’s Tavern and sits in a booth. “Just keep bringing me drinks until I pass out under this table. Also, you have tables?” Moe gives Homer a beer, which he slams, and then tells Homer to join him for a walk. As they leave, one of the booths starts to move and Barney reveals himself to have been hiding disguised as the furniture. “Finally,” he slurs as he goes behind the bar and treats himself to an all-you-can-drink special. 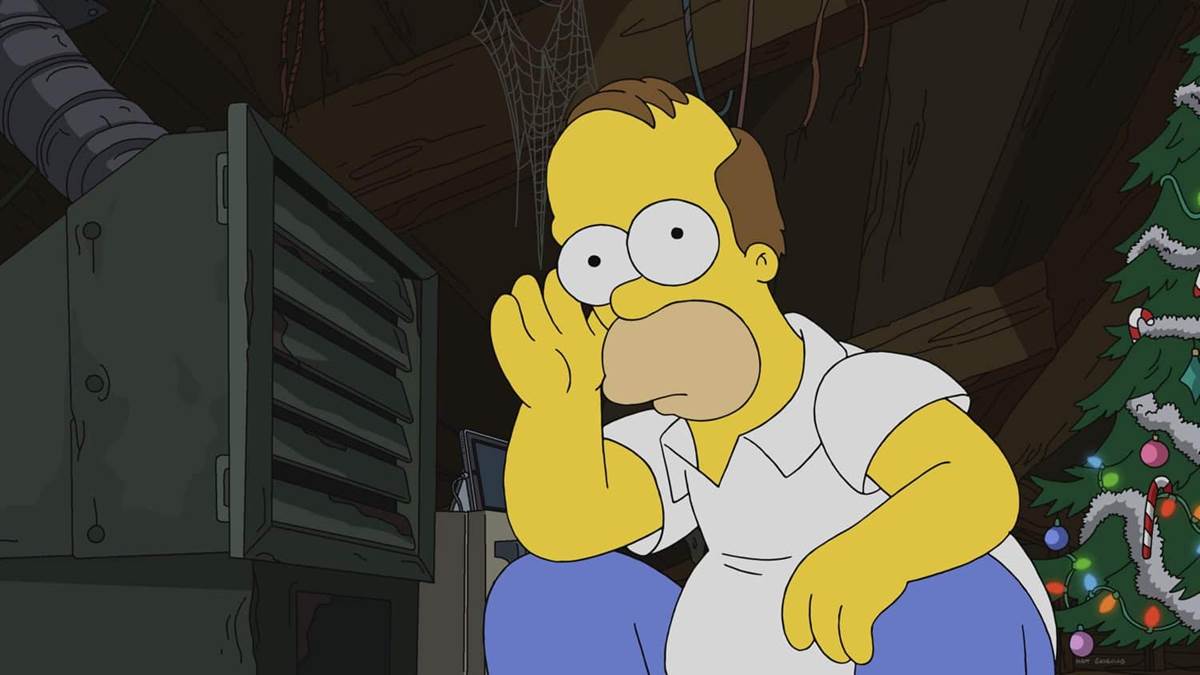 Taking Homer by his house, Moe points out a window above the garage. “There’s a small little room above your garage that nobody knows about,” he informs Homer, revealing that while he hasn’t stayed there personally, he did rent it out to an Irish family for several years. Homer sneaks up there and through the air vent he hears Lisa’s prayers, hearing her bless him. Also heaving Bart’s prayers, he hears Bart ask for a different father and exclaims that it’s good to be home. Cut to Homer decorating the cramped garage attic space with a tree and making himself a hot chocolate. He then gets caught with his hands in several rat traps as he tries to get cheese. Lenny calls and we see him knitting a Christmas sweater, with Carl holding the yarn for him. Through the vent, Homer once again hears Lisa, this time she’s telling Marge she will forgo all of her Christmas presents if Homer can come home. Bart starts to threaten that he will become a jerk without a father home and that Marge will be blamed by society for who he becomes.

The camera pan throughs the vent into the living room and several lost objects are displayed: A book about how to get a baby off their pacifier, a book about cleaning air vents, a family of Borrowers (from the Mary Norton novel), and a bitcoin password that says “Don’t lose” on it. In the living room, Marge tells the kids to get ready to go to midnight mass. Homer suddenly has an idea. “I know, I’ll do the thing that Christmas is all about… Make cookies!” He has a vision of Marge and the kids coming home to him standing in the living room with a tray of cookies, with Marge impressed that Homer only ate most of them. In reality, Homer has destroyed the kitchen, setting several spots on fire, including the drapes. “I burned the good drapes so we’ll have to get corn cob curtains,” he cries. Just then, he hears Maude Flanders from next door exclaim that she’s starting to have contractions. Homer rushes over to find that she’s alone with Rod while Ned delivers Christmas turkeys to families in need. Homer tries to take Maude to the hospital but it’s too late, instead pulling up a YouTube tutorial, which plays after a forced ad for a seminar by Sideshow Mel about how to be a sidekick.

Marge enters the doorway of the Flanders’ home and watches Homer calm Maude down by pretending to be Ned for her. In the next transition, Homer is holding baby Todd. “Perfectly normal, 8 fingers and 8 toes,” he tells her and Marge is impressed. Ned comes in and apologizes as Homer and Marge make up. “I redeemed myself at Christmas like the Grinch, the Die Hard guy and Scrooged,” he exclaims. Ned reveals that in honor of Homer, his son is named Todd Homer Flanders. 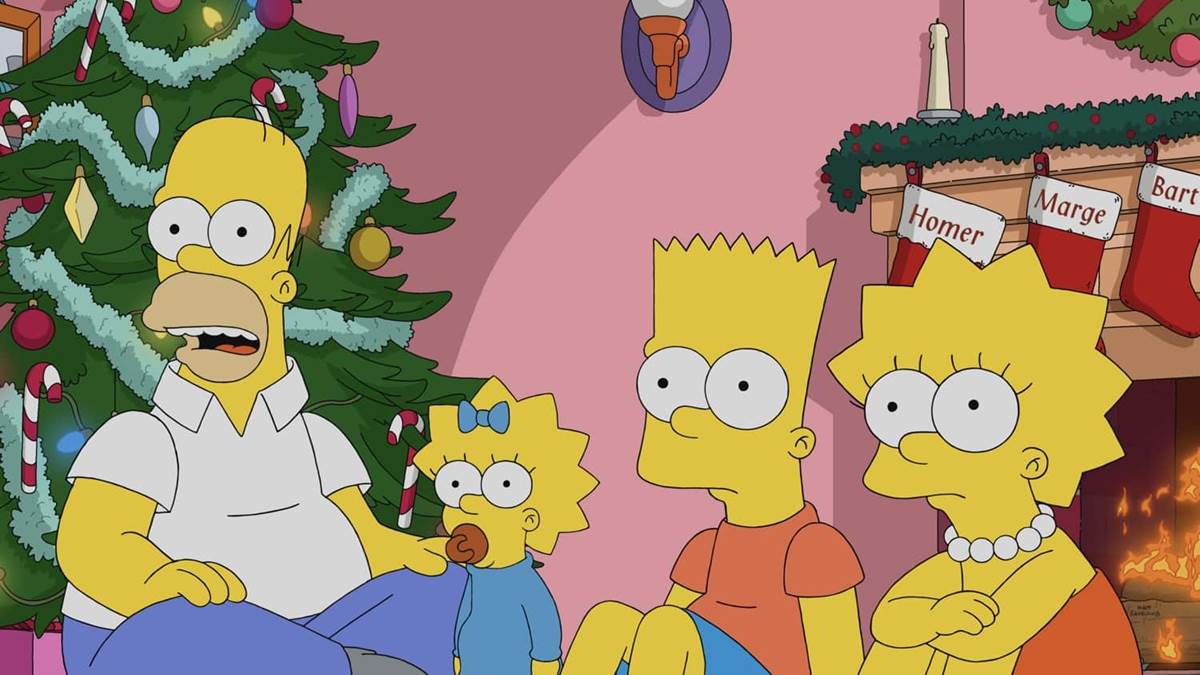 Back in the present, Bart is shocked to hear that Todd’s middle name is Homer, to which Homer informs him that Maggie’s middle name is Lenny. “ But that’s a story for the next Arbor Day,” he jokes, a reference to the fact that this Christmas episode aired in the spring. Later, Bart has invited Rod and Todd to his treehouse to tell them the story he just heard. He ends it differently, saying that Todd was born with a full set of teeth and pulling out Abe Simpson’s dentures to scare him as Grandpa walks underneath the tree with a date looking for his teeth.

This episode includes a mid-credit gag where Homer and Marge sneak up to the attic above the garage to be alone. “Do you think the kids can hear?,” Marge asks as she and Homer take a break from making out. “No, everything up here is totally soundproof,” Moe replies from behind them. “What? Don’t let me stop yous,” he creepily says.

The rest of the credits include holiday greeting cards from the residents of Springfield. These include the following:

Cheers to The Simpsons on their 700th episode milestone!

We’re all grown up! Watch the 700th episode this Sunday at 8/7c on @FOXTV. pic.twitter.com/sQm23h1aSS