Growing up in the 1990’s, Pretty Pretty Princess was a guilty pleasure of mine. I didn’t own a copy, so the girls I was friends with who had it had to play it with me anytime I was invited over. Something I learned about myself all those years ago is that I’m a sore loser when it comes to the black ring, something that holds true today. While this isn’t the first time a Disney overlay has been given to the game (previous editions include Cinderella and Sleeping Beauty), it is the first time a multi-character Disney Princess version has been released. From Hasbro Games comes Pretty Pretty Princess: Disney Princess Edition, which Hasbro was kind enough to send a review copy for. 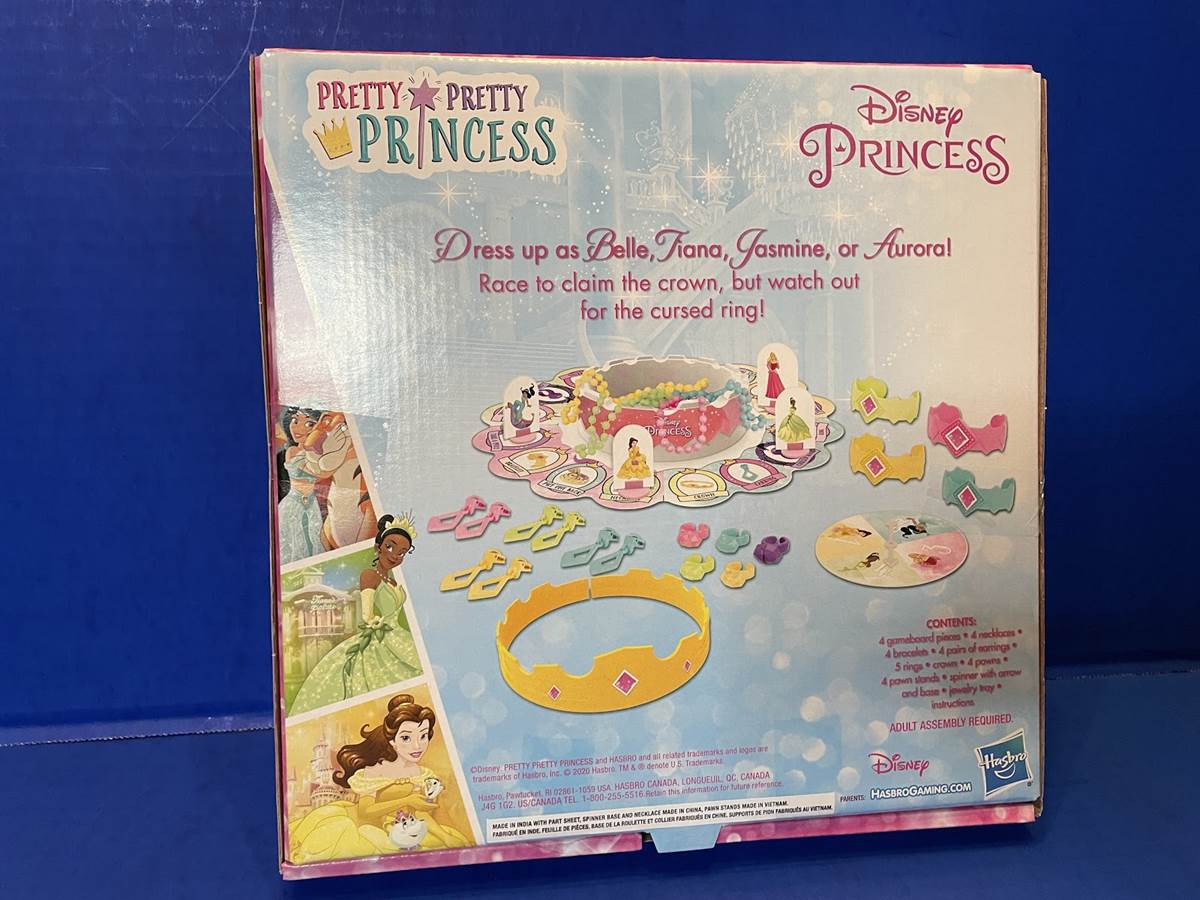 The original version of the game was mostly plastic beaded jewelry in shades of pink, purple, green and blue (plus that despised black ring). Hasbro could’ve easily kept everything the same, theming those same colors to Aurora, Rapunzel, Tiana and Cinderella, but that’s not what they did. Purple becomes yellow for Belle and blue is replaced by teal for Jasmine, offering a more diverse lineup of princess characters. The black ring has also become a purple cursed ring, cursed by the mistress of all evil, Maleficent. 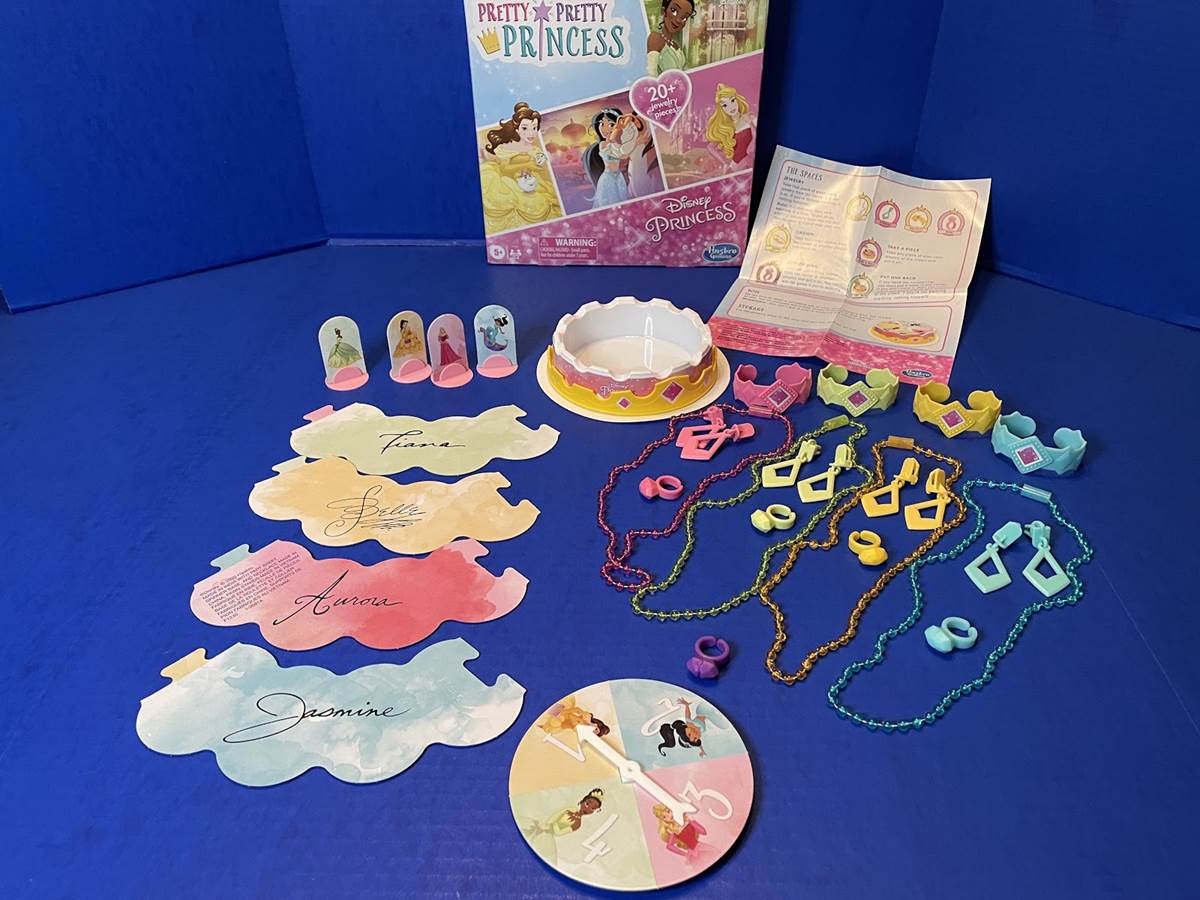 The jewelry pieces have been modified as well, with only the necklace retaining the original game’s plastic bead esthetic. Bracelets have become a cuff style and clip-on earrings now have more of a design to them. The rings are no longer translucent, to match the cuff and earrings. The lone element of the jewelry that feels underwhelming compared to the original is the crown, now yellow plastic with stickered jewels instead of the more traditional tiara. However, kids can also swap out a favorite crown from their own costume collection if they’re disappointed by it. The game board is a 4-piece puzzle that is connected around the tray that holds all of the jewelry. The spinned can also sit on top for easy and convenient storage when playtime is over. Gameplay starts with players choosing their princess character and placing their pawn on any starting space they want. 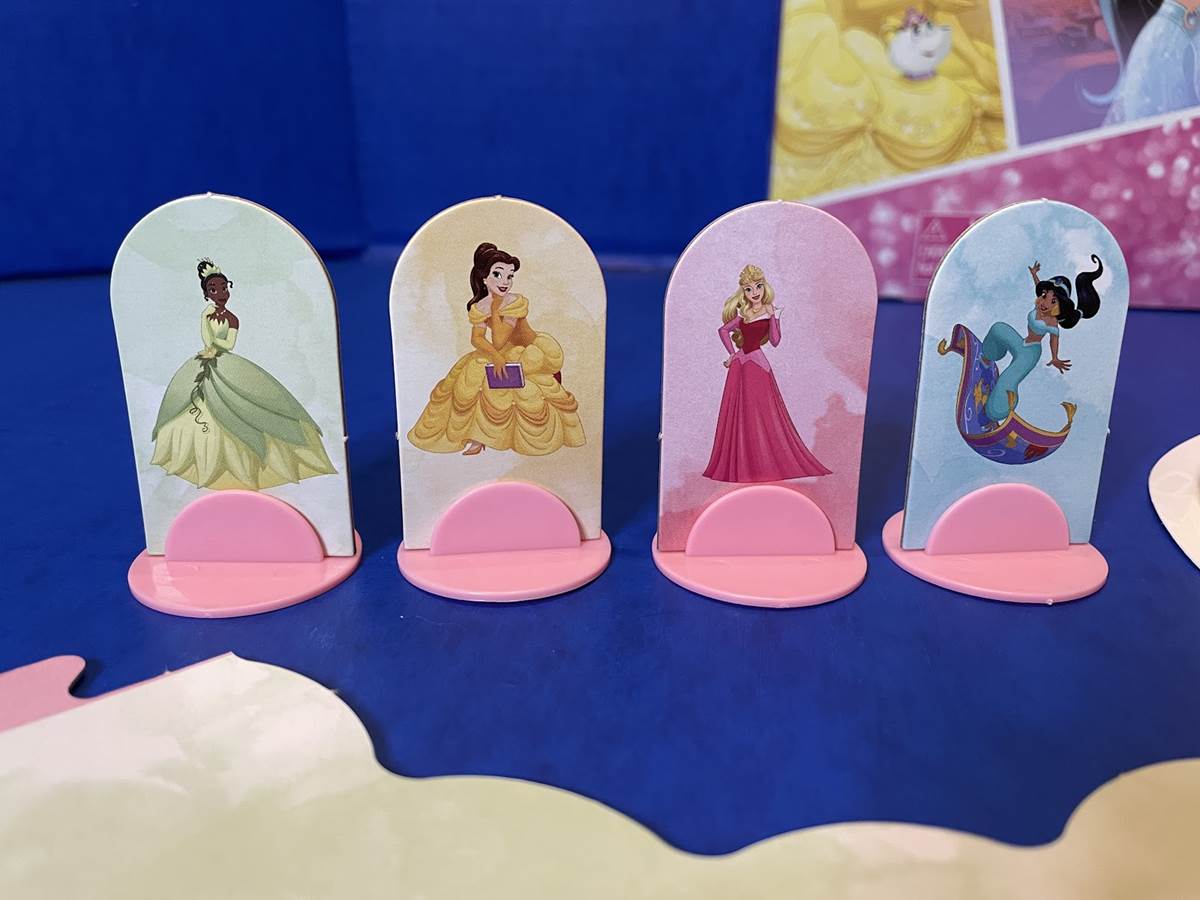 Players take turns using the spinner to move spaces, which reveals which piece of jewelry they can take from their collection. For example, if you’re playing as Tiana, you want to take all of the green pieces. You can only take one piece each turn, so to get both earrings, you’ll need to land on the earrings space twice. 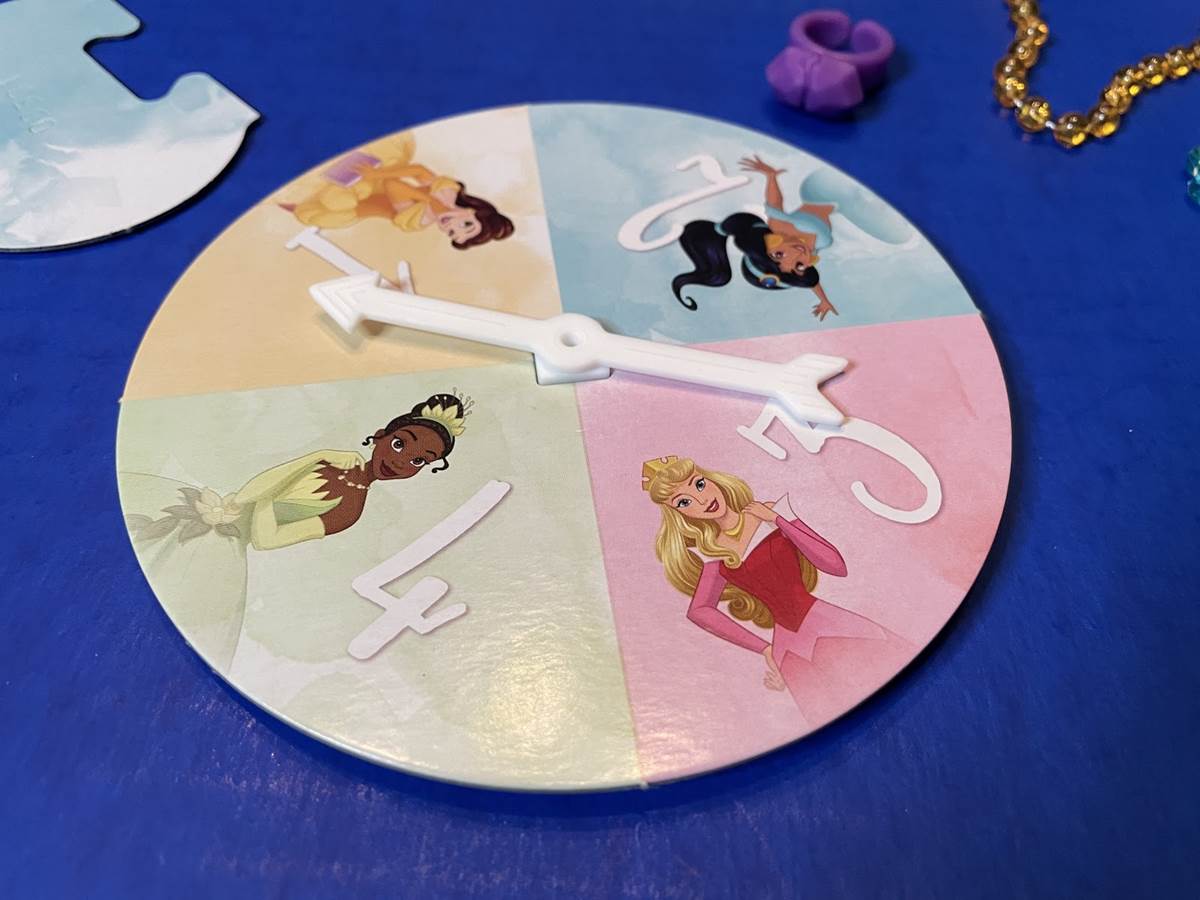 The Cursed Ring prevents a player from winning the game, something that is done when you have every piece of jewelry in your princesses color and are wearing the crown. There are spaces that allow you to put a piece back and you can choose to remove the Cursed Ring at that time, but it can also be given up when another player lands on that space. The Cursed Ring itself is a lighter shade of purple than the one shown on the board, but it’s easily identified by a crack in the gem. 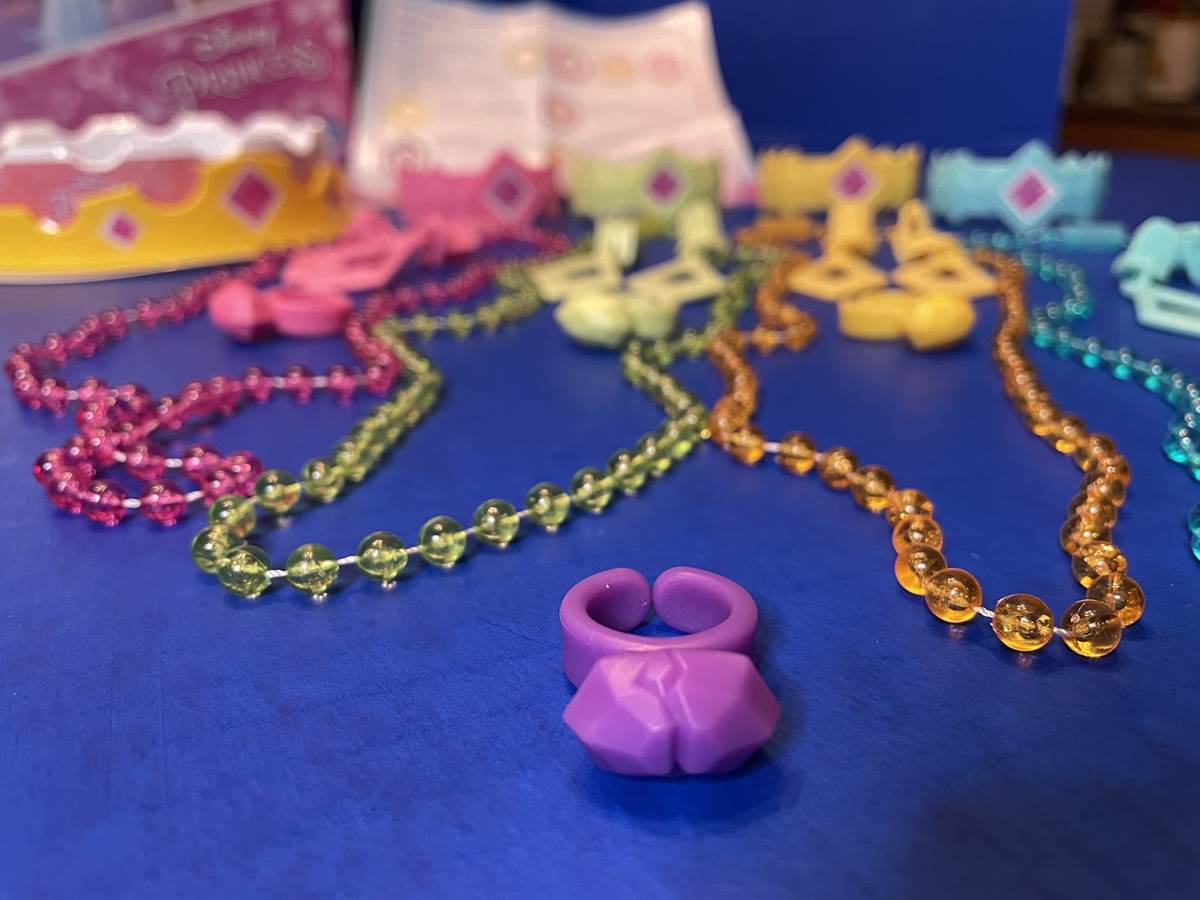 There’s lots of fun to be had by kids and parents as they play to be the first Disney Princess to complete their jewelry collection and wear the crown, without the Cursed Ring, of course. The game is very much the same as its always been, with some redesigned jewelry pieces and variations on the colors to fit Aurora, Jasmine, Tiana and Belle. 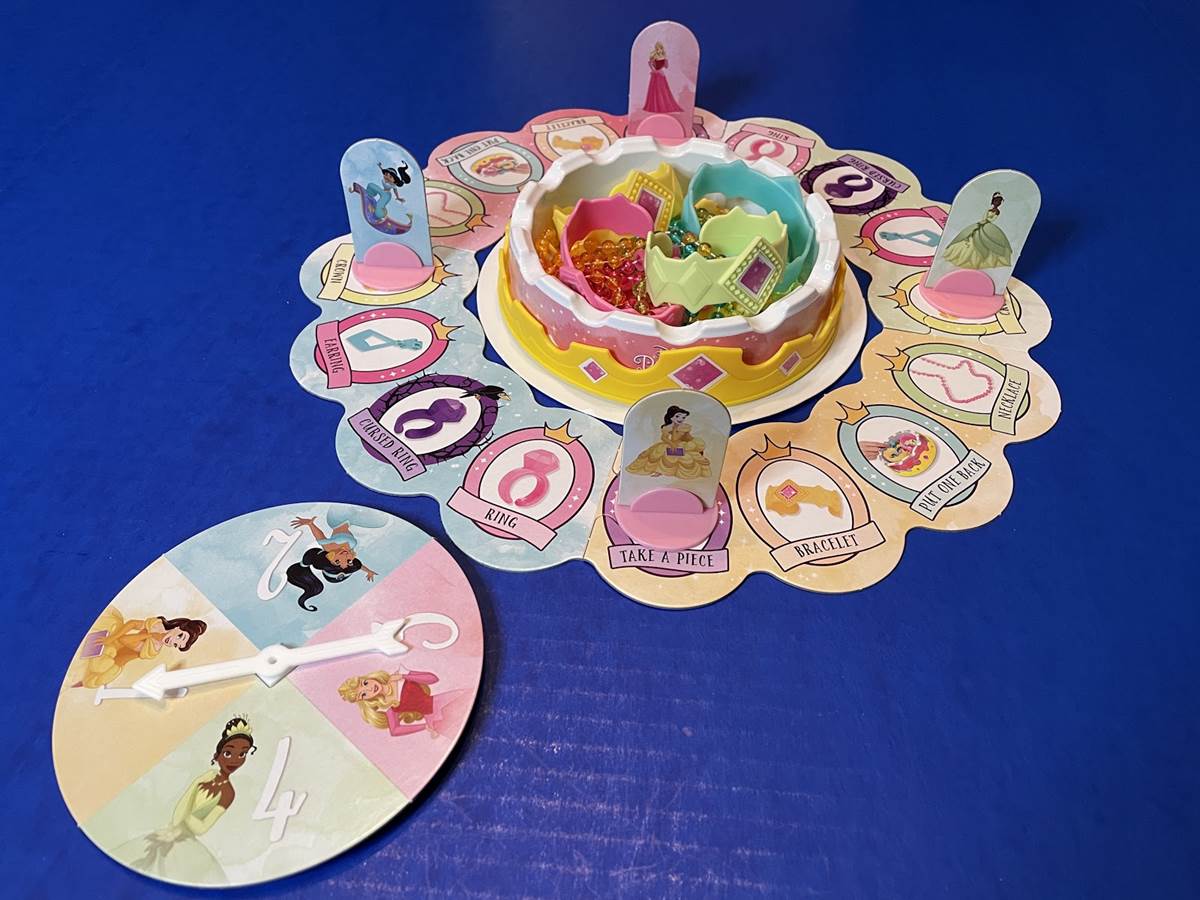 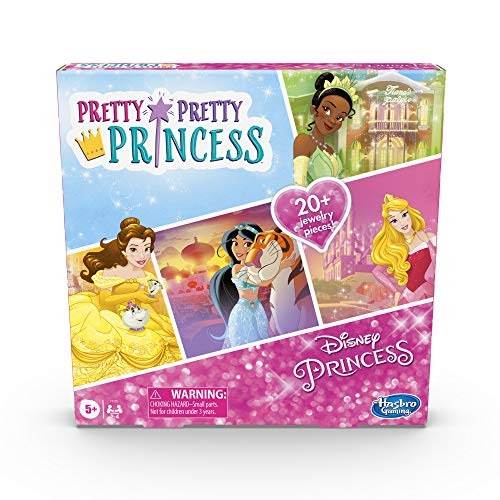