TV Recap: Sydney to the Max – “A Few Good Mentors”

Sydney and Max are back in another episode of Sydney to the Max full of modern and nostalgic fun. In “A Few Good Mentors,” we find 8th graders Sydney and Olive becoming mentors to 6th grade students while Max and Leo hit a road bump in their friendship. Here’s a recap of both plotlines from this new Disney Channel episode. 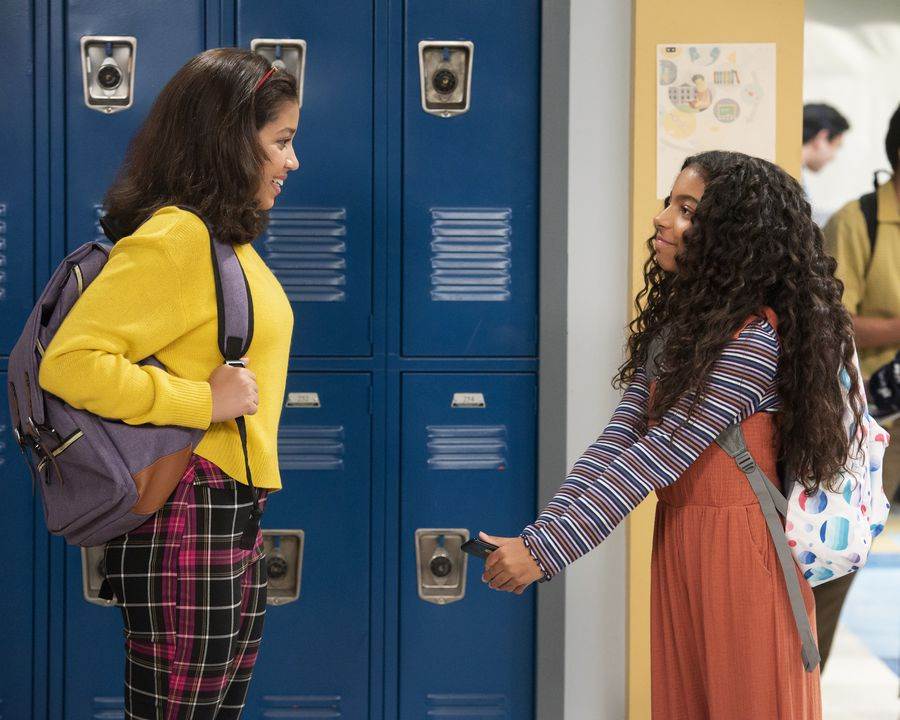 At Clara Barton Middle School, Sydney is pacing back and forth, anxious about becoming a mentor to a 6th grader. She wants to do a really good job, sharing that her mentor, Janet Wentworth, ditched her, letting Sydney accidentally end up in the smelly boys’ locker room. Olive thinks they’ll be great and that their mentees will want to be just like them.

Vice Principal Virmani arrives with Sydney’s mentee, Lucy Davis. When Olive asks where hers is, he acts like he made a mistake and goes to get her. Lucy is nervous, having just moved from Chicago and not knowing anyone yet. Olive’s mentee arrives, named Jordan, who is a confident model. Olive soon finds herself seeking approval from her mentee.

At home, Max finds Judy preparing to volunteer to lead campus tours of her college, admitting that she needs to learn how to walk around backwards. Max shows off his skills at doing it, leading a fake tour around the living room. She starts her practice, “Please, if you can do it, how hard can it be?”

Sydney brings Lucy home with her and reveals her plan to her father, saying she’s going to teach Lucy everything. Max tells her she’s going a little bit overboard. “I’m just trying to be the big sister my mentor never was,” Sydney tells him.

The next day at school, Lucy tells Sydney that she thinks she’s the coolest person in the world. Olive arrives in a new outfit wearing her hair just like Jordan, who compliments her mentor on her hair style. Olive was planning to show Jordan around the club fair only to find that Jordan is now in charge of it. Sydney watches Lucy in her science class through the window in door, watching nobody choose her to be their lab partner. Olive tells Sydner she’s going overboard and needs to let Lucy figure things out for herself.

At home, Sydney tells Olive that she got thrown out of Lucy’s class for barging in and trying to help her get a lab partner. Olive tells Sydney that Lucy needs a friend and Sydney has an idea to pair her up with Jordan. “Syd, they have nothing in common,” Olive tells her, admitting that Jordan is really busy. Sydney says they thing they have in common is that their mentors are best friends.

The next day, Grandma Judy walks out of the smoothie shop backwards as Sydney walks in to wait for Lucy. She tells Max that Olive and Jordan will stop by and they will try to make a friend for Lucy. When they arrive, she acts like it was a coincidence. Sydney tries to make a conversation happen, but it always leads to short answers from Lucy and Jordan. Olive asks Sydney to talk about business in private. “What business did you want to talk about?,” Sydney asks. “Minding your own,” Olive tells her. Sydney explains herself, saying “She doesn’t have any friends and I’m worried she isn’t going to make any on her own.” She turns around to find Lucy right behind her, who feels embarrassed and like Sydney thinks she’s a loser who can’t make friends. “You’re the worst mentor ever,” she says as she walks out.

That night, Judy comes home with a splint on her nose. When Max asks if it happened while auditioning for her tours, she says she actually forgot how to walk forwards after only walking backwards for 3 days. Max finds Sydney sulking in the kitchen and tells her she should apologize to Lucy.

Sydney finds Lucy in her science class sitting alone and sits with her to apologize. A girl walks up and says excuse me, but Sydney dismisses her. She tries again, introducing herself as Kendra, Lucy’s lab partner and friend, who also takes orchestra with Lucy. Sydney leaves them alone and Lucy runs after her. “I kind of think of you as a big sister,” she shares, making Sydney tear up.

Sydney finds Olive in the hallway and tells her everything turned out alright in the end. Olive is bummed that Jordan doesn’t need mentoring, but just then she comes running towards her. One of Jordan’s friends likes a boy, but that boy likes Jordan, but Jordan doesn’t like that boy and she doesn’t know what to do. “She needs me!,” Olive excitedly exclaims to Sydney as she runs off to give her advice.

Max and Leo are goofing off together in science class when the teacher comes to them upset, saying they haven’t been paying attention. She reveals that class ended 10 minutes ago and they didn’t even notice. Vice Principal Virmani comes in with new schedules for both boys, breaking them up so they don’t have classes together anymore.

Max arrives home to tell his mom, hoping she will share his grief and talk to the school to undo the schedule change. Instead, she thinks it’s the right decision. Leo comes over and tells Max that his parents were upset with him, feeling like they did something wrong as parents. They won’t be speaking to the school either, but Leo thinks he can talk Virmani into changing his decision. Max offers to come too, but Leo said there’s no student he dislikes more than Max.

Leo meets with Virmani and before he can ask about being paired in classes with Max again, the Vice Principal goes on about how smart Leo is and how he has the potential to go to Harvard if he’s not distracted. He gives him the choice of being in classes with Max or going to Harvard. “I choose Harvard!” he exclaims. Outside the door, he lies to Max and says “The man is a rock,” acting like he couldn’t change his mind.

The next day, Max thanks Leo for trying to change Virmani’s mind. “You fought for us, you’re a hero,” Max tells his best friend. Leo confesses, calling himself a traitor and telling him what they really talked about, worried that Max won’t talk to him again. Max tells him he has one word for him: “Bye”

That night, Max excitedly shows his mom that he got an A on his science test and Judy gets excited for him. He tells her Leo was right, they are better off being in separate classes. Leo knocks on the door with an apology double cheeseburger and fries, which Max excitedly takes. Leo sees the test on the coffee table and Max tells him he was right. “So I have nothing to apologize for?,” Leo asks. “No, but thanks for the burger,” Max replies.

Another new episode of Sydney to the Max premieres April 2nd, titled “He’s All That.” Here’s the episode description from Disney Channel:

When Harry tells Sydney that he is moving back to Portland permanently, she struggles with the idea of having a long-distance relationship.