Touchstone and Beyond: A History of Disney’s “Reign of Fire”

King Kong and Godzilla might be kings at the box office, but there are other creatures that moviegoers need to fear. What if dragons were real? That’s the premise behind the 2002 Touchstone Pictures film Reign of Fire. Stacked with a cast of A list talent, is the film a lost jewel or another 90’s knockoff of classic monster tales? 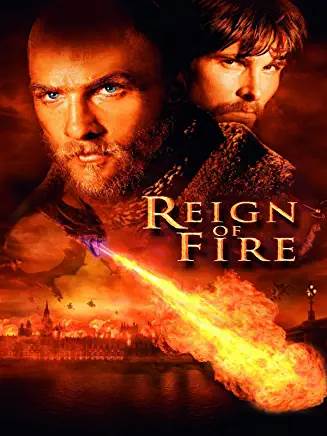 Dragons are real and they have been awakened from a long slumber. The terror and destruction from these mythical creatures have upended society leaving pockets of humans hiding in the shadows of the flying beasts. One group of survivors led by Quinn (Christian Bale) have a meager existence in England.

While Quinn has kept his group alive with the help of his friend Creedy (Gerard Butler) they are not immune to the dragons. Buoyed by the notion that the dragons will eventually starve and die, Quinn’s world is turned upside down upon the arrival of Alex (Izabella Scorupco) and Van Zan (Matthew McConaughey).

Van Zan and Alex have a plan to end the reign of terror from the dragons. They believe that there is only one male dragon that inseminates thousands of eggs around the globe. If they kill the male dragon, the rest will soon die off, and the world will belong to human beings again.

Quinn is skeptical but agrees to join Van Zan and Alex on their mission to London. When they arrive, the team has a small chance of success, but Quinn must confront the fact that the dragon they seek is the same one that killed his mother at the beginning of the film.

The special effects are incredible. For the dragon scenes, the monsters look real and the scenes with the actors look great. The color scheme used to represent the world after the dragons take over is intense. Everything looks like it is burnt to ash and smokey which sets the mood for this dystopian world. I did appreciate at the end of the movie how the lighting changed to reflect the change in the tone of the story. The colors were brighter which represented hope for humanity.

There isn’t much of a story in the film, and the characters don’t have much time to develop. Christian Bale does a fantastic job with what he’s given. You never have time to care for the safety of the humans. When the dragons are about to eat someone, I had little emotion or care for the person’s death. Even at the climax of the film, a climatic death scene seemed kind of silly and pointless.

Reign of Fire is not an Oscar winner, but it’s fun. It’s a monster movie that doesn’t take itself seriously but plays up the action and has top notch actors bringing their best in a silly film. No one needs to drop everything they are doing and watch this movie, but if you like the standard action-packed giant monster flicks, then Reign of Fire is an excellent choice.

While I enjoyed the film, I give Reign of Fire a 2 Golden Popcorn Bucket rating.

Next week we look at Wes Anderson’s dysfunctional family dramedy The Royal Tenenbaums.